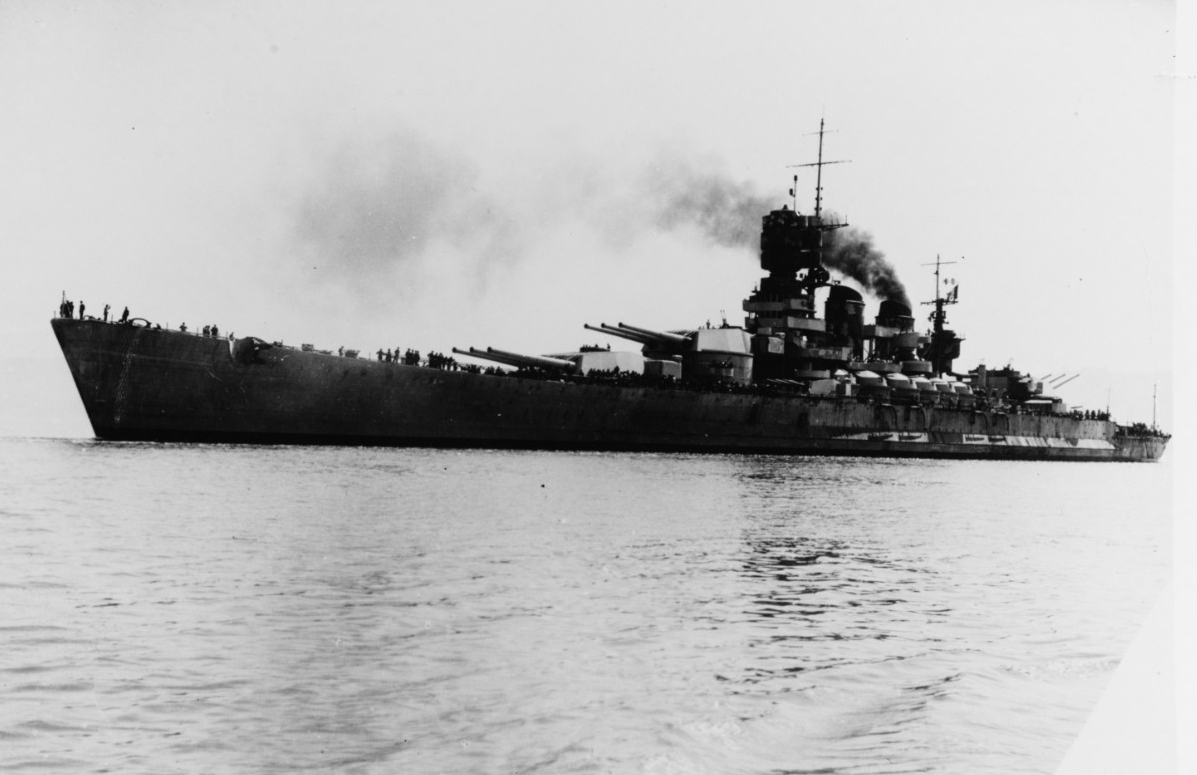 By the late summer of 1943, the Germans had developed and deployed two types of guided bombs, both of which used the same radio-control system. The first was the rocket-boosted Henschel Hs-293 bomb, intended for use against small or unarmored ships. The second went by several designators, but was commonly known by both the Germans and the Allies as the “Fritz X.” The Fritz X was a penetration weapon designed for use against armored ships. Generally carried by the new Dornier Do 217K-2 twin- engine bomber, the Fritz X weighed over 3,000 pounds and had a 710-pound warhead. It could be dropped from an altitude just above 18,000 feet at up to three miles from the target, had aerodynamic enhancements for it to achieve speeds up to 767 miles per hour, and could penetrate over 5 inches of armor plate. The operator had to keep both the target and the bomb in sight for the entire flight, and the bomb had flares (for day) and lights (for night) in the fins to aid the operator in tracking and guiding the bomb. A key weakness was that the bomber had to remain straight and level for the duration of the bomb’s flight, so the best defense was fighter aircraft, although the Allies quickly learned that making smoke worked very well too.

The Germans first used the guided weapons in strikes on ports in Sicily in July 1943 after the Allies occupied the island—initially without much success—although for a time the Allies remained ignorant that the weapons were being guided. However, by the time of the Salerno landings in September, Allied intelligence was aware the weapons existed, and Allied scientists were working feverishly to develop radio jammers to disrupt the guidance system. The jammers, however, were not ready in time for the Salerno landings, although they were deployed by the end of September 1943. Initially, the jammers did not work, because they were not jamming the correct frequency, although this was quickly corrected. The Germans quickly took steps to defeat the jammers, and the Allies countered, setting in motion the see-saw battle between electronic counter-measures (ECM) and electronic counter-counter-measures (ECCM) that continues to this day.

The first real success of the Fritz X occurred on 9 September 1943, the same day as the Salerno landings, against the Italian navy. After the overthrow and arrest of Italian dictator Benito Mussolini two months earlier, the Italian government had entered into secret negotiations with the Allies to switch sides. The Germans fully expected that their untrustworthy allies would do exactly that, and had plans in place (Operation Achse—“Axis”) to occupy all of Italy immediately and disarm the Italian Army, with German troops that were already in Italy at Mussolini’s previous invitation. On 8 September 1943, the Supreme Allied Command in Europe announced that an armistice had been reached with Italy. The Italian government and military high command immediately fled Rome, leaving no one in charge, and the Germans immediately executed their plan. The Italian Army mounted no real resistance to the German takeover.

As of the morning of 8 September (before the armistice announcement), the Italian navy, based at La Spezia in northern Italy on the Ligurian Sea, was under orders to sortie to oppose the Allied landings that were anticipated at Salerno (so much for surprise). Only a few senior Italian navy commanders knew that the real purpose was to “defect” to the Allied side by sailing to Allied-held ports in Tunisia and Malta. Late on the 8th, the force of three battleships (Roma, Vittorio Veneto, and Italia), six cruisers, and eight destroyers sortied from La Spezia and Genoa, rendezvoused, and began a transit down the west coast of Corsica toward Sardinia and Tunisia. By dawn, the Germans had caught on to what the Italian fleet was up to and attacked. The initial German flights played cat and mouse with the Italian ships trying to get the right set-up for the glide-bomb attacks. At first, the Italians did not fire on the German aircraft (which maintained unusual distance and altitude), thinking they were Allied air cover (which had been promised but never showed).

When the concerted German attack by six bombers came later in the afternoon, it was devastating. The first bomb was a near-miss on the battleship Italia (formerly Littorio) that caused significant damage and jammed her rudder. The Italian AA opened fire, but the bombers were too high. The Italians struggled to understand the nature of the attack, since the bombers were not operating in a way any had seen before.

At about 1545, a Fritz X hit Roma, the largest ship in the Italian navy (45,000 tons, nine 15-inch guns) and the flagship of the fleet commander, Vice Admiral Carlo Bergamini (onboard with about 200 of his staff). The bomb hit Roma’s starboard side just aft of amidships, penetrating clean through the ship and detonating under her keel, flooding boiler rooms and her after engine room, knocking out two of her four propeller shafts, reducing her speed, and starting numerous electrical fires. Seven minutes later, a second Fritz X hit the battleship, detonating in her forward engine room and sparking a massive blast from a forward magazine that killed Bergamini, the ship’s captain, and a large number of her crew. The force of the blast blew the number two turret (three 15-inch guns) into the air and over the side. By 1615, Roma had capsized, broken in two, and gone down with massive loss of life: 1,393 sailors (many accounts do not account for Bergamini’s staff and thus give a lower figure). Nevertheless, Italia and much of the Italian navy successfully made it into Allied control. Bergamini was posthumously promoted to full admiral. All told, some 49 Italian combatants were destroyed by air attack, shore batteries, or were seized by the Germans—or were scuttled or sabotaged—during the period when Italy switched sides.

After the armistice, the Allies interred the Italian battleships in Egypt. Some Italian light cruisers, destroyers, and submarines did join the fight alongside the Allies against Germany, although a few Italian torpedo boats in northern Italian ports continued to fight alongside the Germans. Several Italian submarines that had been in the Far East when the armistice occurred were taken over by the Germans, and, operating from Japanese ports with mixed Italian and German crews, continued to fight. One of the Italian submarines even shot down a U.S. B-25 bomber in Japanese waters on 30 August 1945, after Japan had agreed to surrender on 15 August.