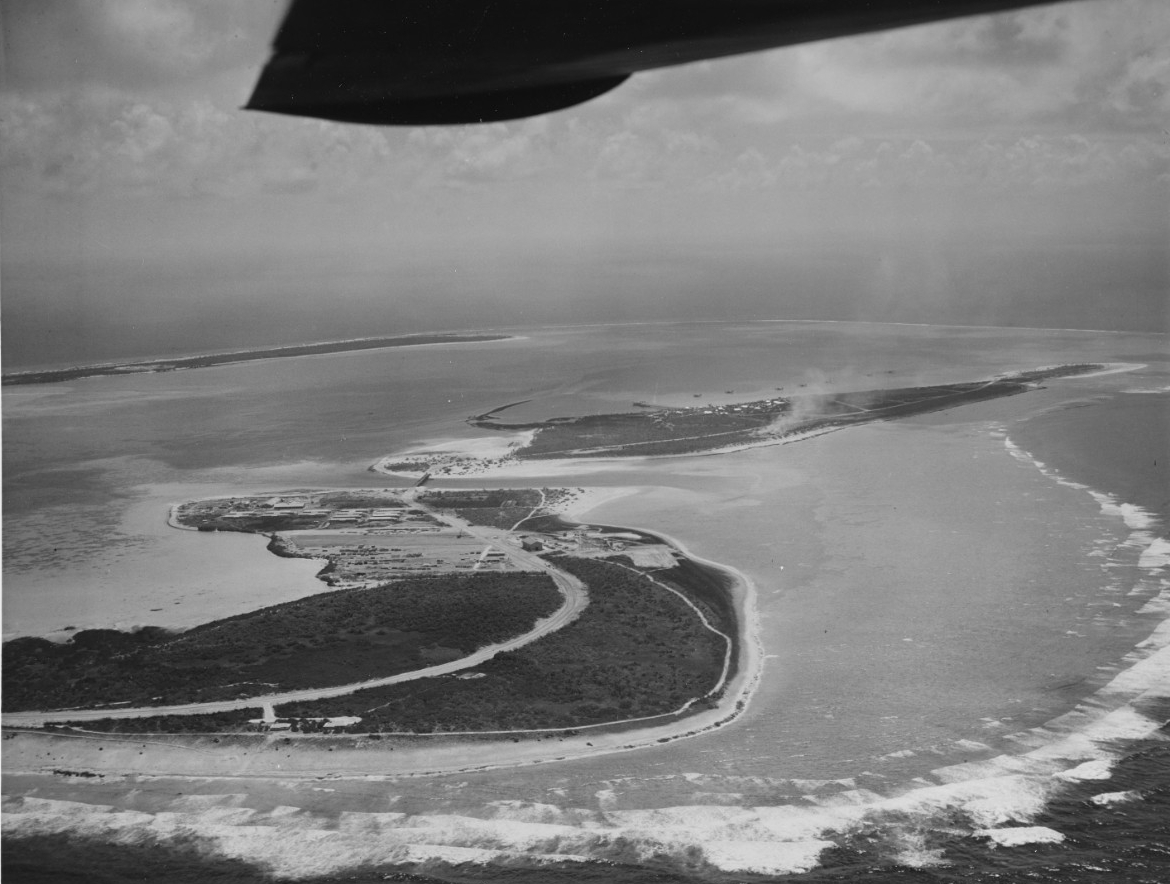 Wake Island. Aerial photograph taken from a PBY patrol plane on May 25, 1941, looking west along the northern side of Wake, with Peale Island in the center and right middle distance and Wilkes Island in the left distance (80-G-411160).

In one of the greatest Intelligence success stories of all time, on 16 January 1917, British Naval Intelligence intercepted and subsequently decoded a telegram from the German Foreign Minister, Arthur Zimmerman, to the German Ambassador in Mexico, via the German Embassy in Washington DC, informing that Germany would resume "ruthless" (Zimmerman's word, in German of course) unrestricted submarine warfare on 1 February 1917. The telegram went on to state that in the event the United States did not remain neutral, the German Ambassador was to approach the Mexican government with an offer of alliance and assistance to "re-conquer" U.S. territory previously taken from Mexico. The British Director of Naval Intelligence, Captain Reginald "Blinker" Hall, passed the contents of the telegram to the U.S. Ambassador to the United Kingdom on 20 February. Of note, the British intercepted the coded telegram via a tap on U.S. diplomatic communications (more on that later.) Although it was the resumption of unrestricted submarine warfare that caused the U.S. to break diplomatic relations with Germany on 3 February, when the text of the telegram was released to the public by President Wilson on 28 Feb, it inflamed public opinion against Germany, while also provoking an intense backlash from those opposed to going to war, who branded it as a "fake" concocted by the British to draw the U.S. into the war. The result has been a 100 years of misinformation and a mountain of conspiracy theory. The success of the British Navy signals interception and code-breaking operation (known at the time as "Room 40") served as a major impetus for similar U.S. efforts that laid the foundation of later U.S. success in WWII, and in particular, the Battle of Midway. (See attachment H-002-1 for more on the Zimmerman Telegram.)

When Admiral Chester W. Nimitz stepped off a flying boat off Ford Island on Christmas Day, 1941 to assume command of the U.S. Pacific Fleet, the magnitude of the challenge facing him is almost incomprehensible today, as he saw the shattered fleet, bloated bodies still being fished from the harbor, and experienced the over-powering stench of oil, death and defeat. Nimitz' first question after he got on the oil-slimed launch to take him across the harbor concerned the status of the defense of Wake Island and the relief plan. When informed that Wake had fallen and the relief operation cancelled (the two actions were simultaneous, neither caused the other, but that was not known at the time) Nimitz fell silent as he immediately grasped the impact of what Admiral Joseph Reeves (a former four-star Commander of the U.S. Fleet and member of the Roberts Commission, already investigating why the U.S. was surprised at Pearl Harbor) termed "a disgrace to the U.S. Navy."

The less than 500 valiant Marine defenders of Wake Island had already been lionized in the press as the "Alamo of the Pacific," having driven off the first Japanese amphibious assault on 11 Dec with heavy Japanese losses (two destroyers sunk with almost all hands, and multiple ships damaged) - this was the only amphibious assault in the Pacific War to be driven off by shore battery fire, and the first Japanese surface warships to be sunk. The U.S. Navy Commanders did not know at the time that in the final Japanese assault on 23 December, the Marine defenders had killed the great majority of the initial landing force (over 800 Japanese KIA) nor did the commanders on Wake Island, who arguably surrendered prematurely, mistaking raised Japanese flags on the island as victory symbols, rather than their intended purpose to avoid friendly fire from their own ships.

After the first attack on Wake Island (which Admiral Husband Kimmel had well-before the war correctly predicted would be an initial Japanese objective), the Pacific Fleet Commander, still Kimmel, had approved an audacious plan to use three U.S. aircraft carriers, with Wake as the bait, to spring a trap on the predicted next Japanese assault, in many respects the blueprint for what Nimitz later did at Midway. With 20/20 hindsight, Kimmel's plan probably would have worked, as the Japanese allocated only two carriers (as predicted by the PACFLT N2, Edwin Layton) in a half-hearted show of support, leaving the assault force and covering force of four heavy cruisers without effective fighter cover for extended periods. However, Admiral Kimmel was ordered relieved on 17 Dec, and command and responsibility for executing the aggressive plan transferred to Vice Admiral William Pye, the Battle Force Commander, whose flagship, the USS California (BB-44), was on the bottom of Pearl Harbor. Ultimately, rather than seizing an opportunity to trap the Japanese, Pye became concerned that the Japanese were planning to spring a trap on him. Pye had many valid reasons for his caution, but indecision and a defeatist attitude amongst the disorganized combined PACFLT/Battle Force staff at the time contributed significantly to other factors, including weather, that turned the aborted relief effort into one of the sorriest episodes in U.S. naval history. In the end, the U.S. Navy chose to sacrifice the Marine defenders of Wake Island (and over 1,000 civilian construction workers) rather than accept any risk to the three U.S. aircraft carriers in the area at the time. (Our brother Marines will occasionally use Guadalcanal as an example of being abandoned by the U.S. Navy, however over three times as many U.S. Sailors died defending Guadalcanal as Marines died on it. In the case of Wake Island, however, the charge is valid.) For more on Wake Island, see attachment H-002-2A and for more on VADM Pye's decision see attachment H-002-2B.