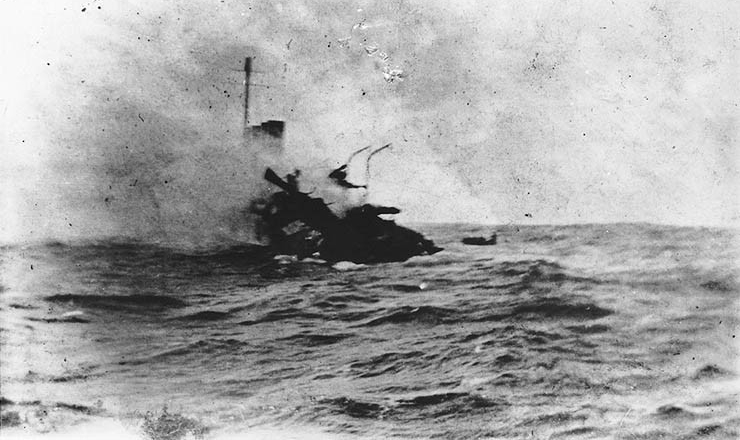 USS Jacob Jones (DD-61) was sunk by German submarine U-53 on the night of 6 December 1917. After fleeing from the mortally wounded vessel, Seaman William G. Ellis captured her final destruction in this photograph(Smithsonian Photograph 72-4509-A).

On 6 December 1917, the destroyer USS Jacob Jones (Destroyer No. 61), sailing alone, was torpedoed and sunk by the German submarine U-53 near the Isle of Scilly, England, the first U.S. destroyer lost to enemy action. Under the command of Commander David W. Bagley, the Jacob Jones sighted and attempted to avoid the torpedo, which struck aft and blew off the rudder, but did not detonate the depth charges on the stern. This was reportedly the longest successful torpedo shot to that date (3,000 yards). The explosion knocked out the Jacob Jones’s radio, so no distress call could be sent, as the ship sank in about eight minutes. However, as the Jacob Jones went down by the stern, the bow increasingly approached vertical and the stern reached depths where the depth charges began to go off, killing many of the survivors in the water. Out of the crew of 110, two officers and 62 enlisted men were ultimately lost due to the initial explosion, the detonation of the depth charges, and exposure before survivors were rescued the next day. Lieutenant Junior Grade Stanton F. Kalk repeatedly helped rescue other Sailors and equalize the loads on the rafts before he succumbed to hypothermia. Kalk and Bagley would be awarded the Distinguished Service Medal (at that time a higher award than the Navy Cross). Bagley had taken a raft with several oarsmen to try to reach the nearest land to get help. When his group was rescued by a British patrol vessel, Bagley learned that another ship had rescued the other survivors in the vicinity of the sinking. Chief Boatswain’s Mate Harry Gibson and Chief Electrician’s Mate L. J. Kelly would also be awarded the Navy Cross, Gibson posthumously. Lieutenant Norman Scott was one of the survivors; he would go on to become a rear admiral leading a U.S. task force to victory in the Battle of Cape Esperance before being awarded a posthumous Medal of Honor for his actions in the Naval Battle of Guadalcanal on 13 November 1942.

The U-53, under the command of Kapitänleutnant Hans Rose, surfaced and took two of the seriously wounded survivors on board for medical care (they also were among the first U.S. POW’s of the war) and in an act of chivalry very rare by that time of the war, Rose radioed the coordinates of the sinking to the U.S. destroyer base at Queenstown, Ireland. Of note, Rose had brazenly brought U-53 into Newport, Rhode Island, in October 1916 (and paid reciprocal courtesy calls on Rear Admiral Albert Gleaves and Rear Admiral Austin Knight) before departing and sinking several merchant ships just outside U.S. territorial waters. Jacob Jones had been in port Newport when U-53 made its call. In addition to Jacob Jones, Rose also sank 87 merchant ships (over 224,000 gross registered tons) during the war, the fifth highest total for a U-boat skipper.

The name “Jacob Jones” was quickly bestowed on a new-construction destroyer (DD-130), which was commissioned in 1919. At dawn on 28 February 1942, Jacob Jones was hit by at least two torpedoes fired by U-578, which hit the forward magazine, resulting in a massive explosion that disintegrated the forward end of the ship. Another torpedo then blew off the stern. Only about 25 to 30 survived the initial explosions before Jacob Jones’s own depth charges exploded, killing even more. Only 12 survivors were ultimately rescued. An Edsall-class destroyer-escort was then named “Jacob Jones” (DE-130) and she served on convoy duty in the Atlantic and did not get sunk.

However, 6 December 1917, was a particularly bad day for the Allies. The French cargo ship SS Mont Blanc, loaded with explosives, collided with a Norwegian steamer in Halifax harbor, Nova Scotia, and exploded in what was one of the largest man-made non-atomic explosions in history, killing over 2,000 residents of Halifax and sailors in the harbor. The U.S. protected cruiser USS Tacoma (C-18) and troop ship USS Von Steuben (ID-3017) were struck by shock waves, but not seriously damaged; the two ships subsequently participated in relief efforts.

Something happened on 7 December besides Pearl Harbor. Battleship Division Nine arrived at the British base of Scapa Flow in 1917, after crossing the Atlantic—the first U.S. battleships to arrive in the European theater. Under the command of Rear Admiral Hugh Rodman, the division consisted of the battleships USS Delaware (BB-28), USS Florida (BB-30), USS Wyoming (BB-32), and USS New York (BB-34). The U.S. battleships, designated the Sixth Battle Squadron, would operate as an integral part of the Royal Navy Grand Fleet under the overall command of Admiral Sir David Beatty. The arrival of the battleships was the result of months of negotiation between the U.S. Navy and the Royal Navy. At the time of U.S. entry into the war, the British were in desperate need of help from U.S. Navy destroyers to combat the U-boat threat and to implement the new convoy scheme. The British did not have an urgent need for more battleships, since they essentially had the German High Seas Fleet bottled up in the North Sea, and the German surface fleet made only one large-scale, but half-hearted, sortie after the Battle of Jutland. The British were also short of oil, but had plenty of coal. As a result, the first division of battleships that the U.S. sent consisted of the newest coal-burning battleships, while newer oil-fired battleships remained in the U.S. east coast, at least initially. Although the U.S. battleships would never see combat against the German High Sea Fleet, they enabled the Grand Fleet to keep its numbers steady as older British battleships went in for overhaul, and their presence served as a big morale boost.

Back to H-Gram 013 Overview