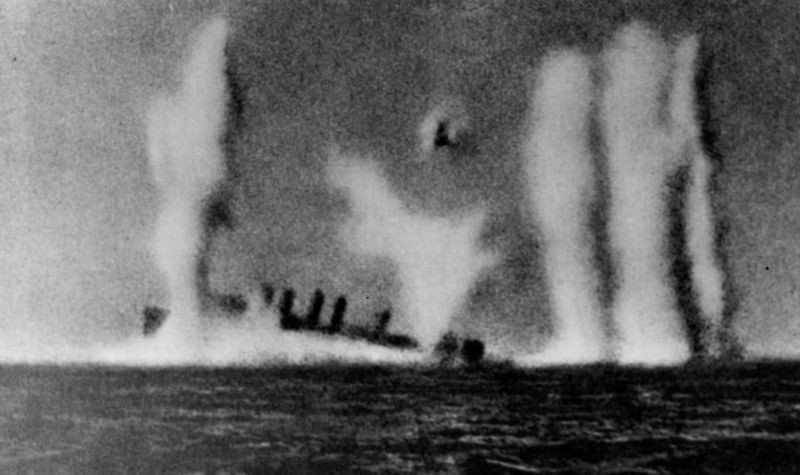 Still from a Japanese propaganda film showing the final moments of USS Edsall (DD-219), under Japanese attack on 1 March 1942 in the Indian Ocean.

Because I covered the 75th anniversary of World War II fairly thoroughly in past H-grams, my intent for the 80th anniversary will be to reference the previous H-grams (which are online) while highlighting specific acts of valor (such as this H-gram) or cover some major events I previously didn’t get around to writing about. These include the New Guinea campaign and some European/Atlantic Theater actions. In some cases, such as in the case of the H-gram covering the Pearl Harbor attack, I may make some significant updates/revisions that I will highlight. I will also continue coverage related to the 70th anniversary of the Korean War, the 50th anniversary of Vietnam, and the “Battles You’ve Never Heard Of” series.

In previous H-grams, I have quoted naval historian Rear Admiral Samuel Eliot Morison’s statement that the Battle off Samar in October 1944 represented the most gallant action in U.S. naval history, particularly the solo charge by Commander Ernest Evans and Johnston (DD-557) against an overwhelming Japanese force. Although I agree with Morison (and one of my goals as director of Naval History is to have a destroyer named after Ernest Evans), I have also said that there are many contenders for the title “most gallant.” The story of Edsall and her commanding officer, Lieutenant Joshua Nix, is one of them. (I didn’t do near enough justice to this action in H-Gram 003).

In the last week of February 1942, the Allied defense of the Dutch East Indies collapsed in an utter rout after the disastrous defeat of combined Dutch, British, Australian, and U.S. forces in the Battle of the Java Sea in the face of a relentless onslaught by the Imperial Japanese Navy. Fleet Admiral Ernest J. King would later describe the ill-starred campaign as a magnificent display of incredibly bad strategy. However futile, the defeat was also chock full of some of the most incredible displays of courage in the face of overwhelming odds in the annals of the U.S. Navy, with many such acts no doubt known but to God. There were no Medals of Honor or Navy Crosses for the crew of Edsall, nor was any ship ever named after her commanding officer, because their acts of valor were known only to the Japanese.

In the pre-dawn hours of 1 March 1942, Edsall and her sister Whipple (DD-217), both deemed unfit for combat service due to previous damage, completed the transfer to oiler Pecos (AO-6) of 485 survivors from the seaplane tender (and former first U.S. aircraft carrier) Langley (AV-3), scuttled two days earlier after being crippled by Japanese navy land-based bombers. Edsall received orders to take 31 U.S. Army Air Forces pilots, rescued from Langley, to Java, even though their 32 P-40 fighters had gone down with Langley and Java was being evacuated. Nevertheless, Edsall obeyed her nonsensical orders, set a course north toward Java, and was never seen again—except by the Japanese.

Later that day, Pecos was sighted and subjected to relentless attack by Japanese carrier aircraft, and finally sunk despite a spirited defense that embarrassed the best dive-bomber pilots in the Japanese navy. Whipple responded to Pecos’ distress calls, ultimately rescuing 232 survivors after nightfall, but was forced to leave the area due to repeated submarine contacts, leaving almost 500 survivors to perish in what was one of the great tragedies of the war.

Edsall had reversed course and was probably responding to Pecos’ distress calls when she was sighted by a Japanese aircraft only 16 miles from the Japanese carrier force (Kido Butai) of Akagi, Kaga, Hiryu, and Soryu. The plane misidentified the Edsall as a “Marblehead-type” light cruiser “pursuing” the Japanese carriers. Reportedly blowing his temper that an enemy “cruiser” was that close to his force without having been previously detected, Vice Admiral Chiuchi Nagumo ordered both his fast battleships, Hiei and Kirishima, and both his heavy cruisers, Tone and Chikuma, to dispatch the enemy cruiser as his carriers continued recovery of aircraft from the Pecos strikes.

Edsall didn’t have a prayer. With her speed and maneuverability impaired by the premature explosion of a depth charge under her fantail in a previous attack on a submarine contact, the destroyer had no hope of escape from the battleships and cruisers. Her antiquated 4-inch guns couldn’t even penetrate Japanese destroyer armor, let alone that of battleships and cruisers. Edsall’s anti-aircraft armament was pitifully out of date. She carried less than a full load of torpedoes (9 in 12 tubes, and by design only 6 tubes could fire in each direction). Although torpedoes were Edsall’s most potent weapon, attempting a daylight torpedo attack against faster ships, with torpedoes that could not out-range even the secondary armament of those ships, could only end one way.

No one knows went through the mind of Lieutenant Nix as he assessed the situation. However, as a product of the U.S. Naval Academy in the interwar years, he was thoroughly indoctrinated with the spirit of John Paul Jones and steeped in the mantra of the dying Captain James Lawrence: “Don’t give up the ship.” Alone in the Indian Ocean against insurmountable odds, with no prospect of help and unable to run, Nix’s options were to strike his colors, scuttle and abandon his ship, or to go down fighting. The evidence shows that for his honor and the honor of the U.S. Navy, he chose to fight to the end.

Edsall responded with a smoke screen described by the Japanese as very skillfully laid (it took Tone almost 40 minutes to actually find Edsall and open fire). For well over an hour, Nix put on a display of ship handling for which even the Japanese expressed admiration. Repeatedly and unpredictably altering course and speed, from flank to zero and in between, Edsall thwarted Japanese aim time and time again, as dozens and then hundreds of Japanese shells missed. The longer range at which the Japanese fought gave Nix enough time between gun flash and impact to take evasive action. The Japanese shells very accurately hit where they were aimed, and where they expected Edsall to be, except Edsall wasn’t there.

Interspersed with additional smoke screens, Edsall’s bobbing, weaving, and jinking was described by a Japanese account as like “a Japanese dancing mouse,” meant as a compliment to her nimble, manic, and unpredictable actions. Eventually, the Japanese figured out that they were up against a destroyer and not a light cruiser. This only added to the mounting frustration of the Japanese commanders (the commander of the battleships was Rear Admiral Gunichi Mikawa, future victor in the devastating U.S. defeat in the Battle of Savo Island). Here, however, the powerful Japanese force that had run amok across the Pacific, steamrollering all opposition, was being stymied and thoroughly embarrassed by one elderly destroyer.

At a point, the Japanese battleship and cruiser commanders ordered their force to “charge” and close the range. Lieutenant Nix responded by charging the Japanese. Shortly after, Edsall turned and opened fire with her 4-inch guns, but all rounds fell short. However, the Japanese were then shocked as a spread of torpedoes narrowly missed Chikuma, causing them to be a bit more circumspect.

Finally as dusk was approaching and over 1,200 rounds fired for at most two hits—neither of which seemed to affect Edsall—Admiral Nagumo decided that enough was enough and ordered his carriers to launch aircraft despite the fading light. Kaga, Hiryu, and Soryu launched a total of 26 Val dive-bombers that set upon Edsall. For about 20 minutes, Nix managed to make most of the dive-bombers miss. However, several direct hits and multiple near misses were more than the old ship could take.

As fires began to rage and the ship began to settle, and before losing all steerage way, Nix defiantly pointed his bow at the Japanese ships. He then supervised an orderly abandon ship before apparently returning to the bridge where he was not seen again (according to Japanese observers).

With Edsall immobile, abandoned, and already sinking, Kirishima and Chikuma closed in for the kill with a final fusillade of shellfire from two directions. In the end, it took 1,335 14-inch, 8-inch, 6-inch, and 5-inch shells, 26 550-pound bombs, and over an hour and a half to put Edsall under. A still from a film of Edsall’s last moments was used in Japanese propaganda, with the destroyer misidentified as HMS Pope, and misidentified in many subsequent accounts as USS Pope (DD-225—a sister ship lost the same day south of Borneo). In the film and still, Edsall is literally being blown out of the water.

Chikuma picked up about eight survivors from Edsall. Many others were left behind. Edsall had sent a radio report stating she had been surprised by two Japanese battleships, but only one ship heard it, a Dutch cargo ship subsequently sunk. The message was only reported after the Dutch ship’s master was rescued days later. It wouldn’t have made any difference. There was no one to come to Edsall’s aid, as the Kido Butai, a separate battleship force, and other cruiser forces swept the seas around the Dutch East Indies clear of any Allied warships or merchant shipping. These included heavy cruisers USS Houston (CA-30) and HMS Exeter, light cruiser HMAS Perth, U.S. destroyers Pope and Pillsbury (DD-227), gunboat USS Asheville (PG-21), and other Allied destroyers and ships. (Every one of the ships above has their own unique story of incredible valor to rival this one.)

Lieutenant Nix and his crew were subsequently declared missing in action due to enemy action as of 1 March 1942. No word of the fate of any was heard during the war, and all were declared presumed dead in November 1945. During war crimes trials in 1946, the remains of six Edsall enlisted crewmen, and possibly five of the USAAF pilots who had been aboard Edsall were located in mass graves near Kendari II Airfield, Celebes, Indonesia (formerly Dutch East Indies). All had been executed by beheading, determined years later to have occurred on 24 March 1942. Japanese accounts suggest that Nix chose to go down with his ship.

For more details on the last months of USS Edsall, please see attachment H-067-1. For more on the valor of the U.S. Asiatic Fleet, please see H-Gram 003.