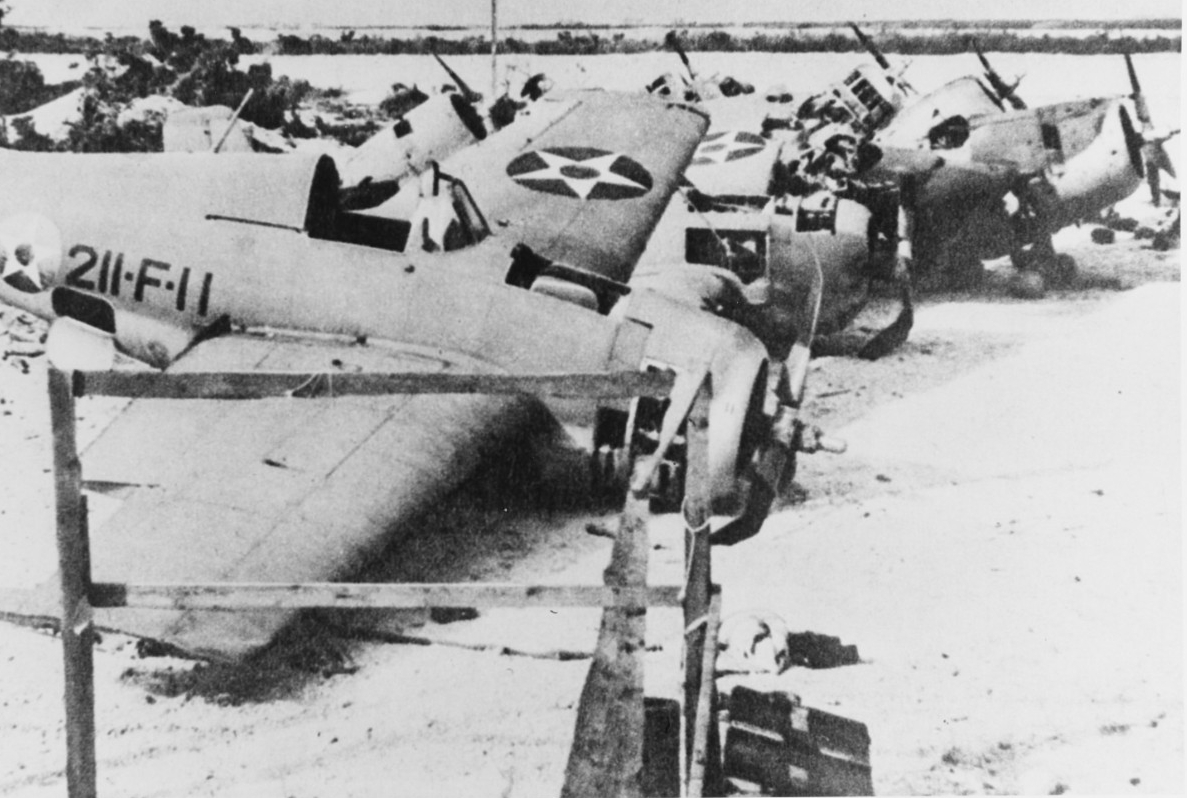 On the morning of 8 December (7 December, Pearl Harbor time) 36 Japanese twin-engine bombers from Kwajalein struck the U.S. outpost at Wake Island, a small atoll that served as a refueling stop for Pan-Am Clipper flying boats between Hawaii and Guam.  Although Wake was alerted to the state of war with Japan, with no radar on the island, a pounding surf that drowned out the noise of planes, and favorable cloud conditions, the Japanese avoided detection by the four airborne Marine Wildcat fighter combat air patrol, and achieved surprise, destroying the remaining eight Wildcat’s on the runway (the 12 Wildcats of VMF-211 had only arrived from USS Enterprise (CV-6) on 4 Dec and no revetments had been completed yet) and killing almost half of the Marine aviation personnel (23 of 50) and wounding more.  The bombers strafed the Pan Am Clipper that had just returned to Wake after aborting its flight to Guam upon word of war, but it was able to take on all Pan Am employees (except for native Chamorro workers who were left behind) and return to Hawaii.  The bombers returned twice more in the next two days, bombing decoy gun positions (the Marines had moved the guns in anticipation that the Japanese would strike them next and made log decoys) and fighters shot down two bombers, however a lucky hit on dynamite storage of the civilian construction company upgrading the airfield and dredging the lagoon, caused massive secondary explosions that destroyed large quantities of ammunition.

The first Japanese amphibious assault occurred at dawn on 11 December as a Japanese force of older light cruisers and destroyers opened fire in an ineffective shore bombardment.  Marine shore batteries (5” and 3” guns) held fire under orders of Senior officer Commander Winfield Cunningham and Marine detachment commander Major James P.S. Devereaux (both later claimed credit), until the Japanese ships were well in range.  The Marine guns hit Rear Admiral Kajioka’s flagship, the light cruiser IJN Yubari, on the second salvo, eventually scoring eleven hits with serious damage.  Marine gunners hit the destroyer IJN Hayate in the magazine which exploded with the loss of all hands but one (168) the first Japanese surface combatant sunk by the U.S. in the war (planes from USS Enterprise had sunk the Japanese submarine I-70 off Oahu on 10 Dec.)  Other ships were hit and damaged, and the Japanese aborted the landing before any troops went ashore.  Marine Wildcats strafed and bombed the retreating Japanese, damaging more ships and hitting the depth charge racks on the destroyer IJN Kisaragi, which exploded and sank with the loss of all hands (157).  In subsequent days, Marine fighters and anti-aircraft accounted for 28 Japanese aircraft downed or damaged, but by the second Japanese assault on 23 Jan, despite extensive cannibalization, all Marine fighters had been lost or we no longer flyable.  Following the first attack it was widely reported that the Wake Island senior officer, Commander Winfield Cunningham, sent a message to Hawaii requesting “send more Japs.”  This is not true; the phrase originated in cryptographic “padding” – non-sensical phrases inserted into coded messages to complicate enemy code-breaking efforts (the same was true of the famous “the world wonders” phrase in Nimitz’ message to Halsey during the Battle of Leyte Gulf inquiring into the whereabouts of TF-34).   The situation on Wake was desperate and both Cunningham and Deveraux knew it.

In response to the unexpected defeat, the Japanese detached two carriers (Hiryu and Soryu, with 108 aircraft) from the returning Pearl Harbor strike force, which commenced strikes on Wake on 21 Dec, and it was Zeros from the carriers that destroyed the last Marine fighters.  The Japanese invasion force returned on 23 Dec, essentially the same force with replacements as the first attempt, still under the command of the much wiser RADM Kajioka.  Japanese ships remained out of range of Marine shore batteries, and landed in positons not covered by the larger Marine guns under cover of darkness, and did not open fire until Japanese troops (bolstered by Special Naval Landing Force, i.e., Japanese “Marines”) had reached shore.  Nevertheless in bitter combat throughout the pre-dawn hours into the morning, the 450 Marine defenders killed or wounded virtually the entire initial Japanese landing force (over 800 KIA, over 300 WIA) although the Japanese had several hundred more in reserve afloat.  However, inability to communicate (largely due to previous Japanese bombing) with isolated pockets of still-resisting Marines convinced Commander Cunningham that Japanese success was much greater than it was, and that further resistance was futile.  Cunningham gave the order to surrender and Deveraux complied, although it took several hours to get the Marines in contact to comply.  In the end, 49 U.S. Marines, 3 Navy and 70 civilian workers were killed, and two Marines MIA, during the entire course of the “siege” of Wake Island.  The Japanese captured 433 U.S. service members (20 died in captivity) and 1,104 civilian workers (108 died in captivity.)(Sources vary on some of these numbers.)

Of note, Marine pilot Captain Henry T. Elrod, who sank the destroyer Kisaragi and downed two Japanese aircraft, was posthumously awarded a Medal of Honor for his actions fighting as an infantryman during the second Japanese assault.