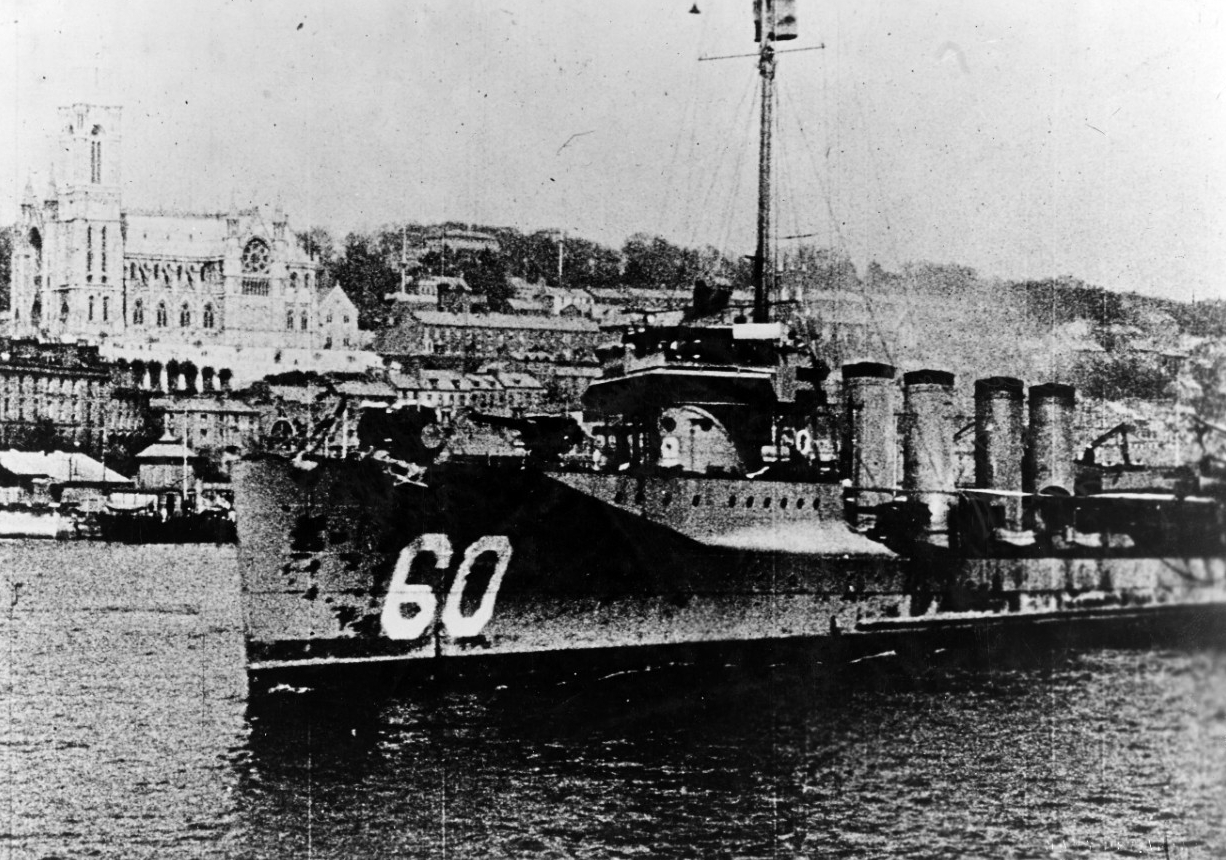 After the U.S. declaration of war on 7 April 1917, the U.S. Navy joined in the fight against German U-boats, although the first thing the Navy was ordered to do, on 7 April, was to commandeer and take control of all radio and wireless stations in the United States, which were pressed into wartime service (and censored).

On 19 April 1917, a Navy gun crew on the armed steamship Mongolia (armed with a 6” gun stripped off a U.S. navy warship) engaged and drove off a U-boat in the English Channel, the first shots fired by the U.S. Navy against the Germans in the Atlantic.  The gun (No. 263, nicknamed “Teddy”) still exists in a park in Portsmouth, Virginia.  The subject of arming merchant ships prior to the outbreak of war caused major debate.  President Wilson’s request to arm merchant ships beginning in February 1917 was turned down by Congress.  Wilson then ignored Congress, and U.S. merchant ships began to be armed with guns and gun crews “taxed” from other U.S. Navy warships even before the declaration of war.

On 28 April, the German submarine U-21 torpedoed and sank the tanker Vacuum off Scotland; among the 24 crew killed was Lieutenant Clarence C. Thomas, the first U.S. naval officer killed in action in WWI.

On 8 May, the destroyers USS Wadsworth (DD-60) and USS McDougal (DD-54) commenced the first U.S. Navy combat patrol in European waters, following their arrival in Queenstown, Ireland, on 4 May.

On 21 May, the destroyer USS Ericsson (DD-56) engaged a surfaced U-boat that was firing on two sailing vessels, and fired a torpedo at the U-boat, which missed.  This was the first confirmed engagement of a U-boat, and the first launch of a torpedo, by a U.S. Navy destroyer in WWI.  The U-boat then submerged and used torpedoes to sink the two sailing vessels, and Ericsson rescued survivors.

On 24 May, the first convoy to Europe from the United States departed Hampton Roads, Virginia, escorted by the British Royal Navy.

On 26 May, the new oiler USS Maumee (AO-2) refueled six destroyers in the mid-Atlantic on their way to Europe, the first underway refueling in U.S. Navy (or any navy) history.  As related in a previous H-gram, the Maumee’s XO, Lieutenant Commander Chester Nimitz, and the Atlantic Fleet Fleet Engineer, Commander Ernest J. King, had devised the method only days prior.

Rear Admiral Sims' recommendation on 14 April that the U.S. Navy immediately send as many destroyers as possible to assist the British in the Western Approaches (in hindsight seemingly so sensible) actually resulted in heated debate and intense opposition within the Navy Department.  Indecision about policy was the main reason for the delay of Lieutenant Commander Taussig's destroyer division’s departure from Boston until 24 Apr 1917 (although Taussig put all that time to good use improving the materiel readiness of his ships, several of which broke down during the transit anyway, but were able to complete the transit, albeit by reducing the speed of the whole force).  Arguments against Sims' recommendations included that sending destroyers would leave the U.S. East Coast defenseless against German U-boats, and perhaps more importantly, leave the Battle Fleet defenseless against the same threat (the U.S. was short of destroyers too, for much the same reason as the British—focus on building battleships at the expense of a balanced fleet).  Sending the destroyers was also viewed as a major violation of Mahan (dead only three years) doctrine to not split up the Fleet.  There was heated opposition to having U.S. naval forces operate under British command. (That problem was solved by elevating Sims from a liaison to the Royal Navy to Commander of U.S. Naval Forces Operating in Europe—and giving him three stars—which put the destroyers under his command...even though they still actually operated under British tactical control.)   There was also an affront to U.S. national pride, in that the British did not ask for the U.S. Battle Fleet. (When the United States did send battleships in December 1917, we sent our newest coal-fired ships, not our newer oil-fired ships, because the British had plenty of coal but were seriously short of oil—and they really didn't need more battleships anyway.)  The fact that the Atlantic Fleet Commander, Admiral Mayo, got almost completely cut out of all decisions regarding deployment of ships, and making Sims a "commander" of U.S. naval forces in Europe, was not helpful either.  Lastly, there was still considerable historic animosity within the U.S. Navy toward the Royal Navy; Sims himself had been relieved of command of the battleship USS Minnesota (BB-22) in 1910, on order of President Taft, for making a public pro-British speech in London (the fact that Sims was in command of a battleship while only an O-5, over the objection of Navy leaders, due to political connections with Theodore Roosevelt, was also a factor).  Sims' "Guildhall speech" that got him fired proved to be remarkably prescient and was resurrected and quoted widely in the British press after his return to the UK in April 1917  (in a nutshell, if you Brits ever get into a real jam, the U.S. will be there for you, but more flowery).

Back to H-Gram 005 Overview