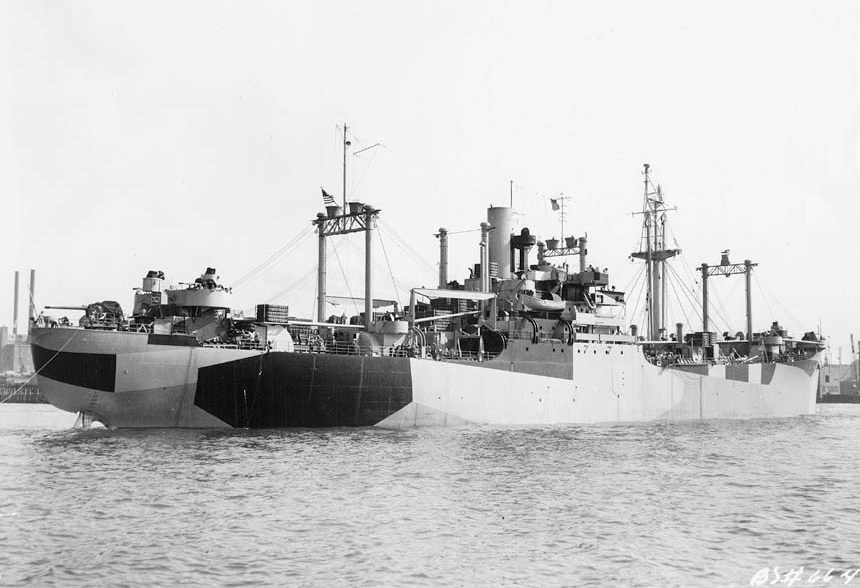 The cargo ship SS Starlight was acquired by the War Shipping Administration as she was nearing completion in 1943. She was converted to an auxiliary personnel transport and commissioned into the U.S. Navy on 15 February 1944 as USS Starlight (AP-175). During the war, Starlight landed assault troops at Guam on 21 July 1944, at Leyte on 20 October 1944, and again on 18 November. She survived three days of kamikaze attacks at Lingayen Gulf, Philippines, in early January 1945 and then at Okinawa on 11 April 1945. During these operations, Starlight was credited with shooting down a total of six Japanese aircraft. After the war, she transported U.S. Marines to Tientsin, China, on 9 February 1945 upon resumption of the civil war between Chinese Communists and the Nationalist Government of Chiang Kai-shek. She was decommissioned and sold in 1948, and sailed for 20 years as a commercial cargo vessel under the name SS Badger State.

In 1960, Badger State was bought by States Marine Lines and, in 1969, she was contracted by the Military Sea Transportation Service to ship ammunition to Vietnam in support of the U.S. war effort. Under Master Charles T. Wilson, Badger State got underway from the Naval Weapons Station, Bangor, Washington, late on 14 December 1969, destined for Da Nang, Republic of Vietnam, with a crew of 40 and cargo that included 8,900 500-, 750-, and 2,000-pound bombs. The ammunition had been loaded in a rainstorm that soaked the wood packing intended to hold the bombs in place. In addition, soon after she departed, leaking hydraulic fluid from her steering gear adversely affected the operation of her rudder.

Badger State encountered very heavy weather as she transited about 550 nautical miles north of Midway Island. Taking heavy rolls as much as 40 degrees, it became apparent to the crew that the bands used to secure the bombs were inadequate and there was great risk that the bombs would break free and start rolling around in the holds. Captain Wilson attempted to keep the ship on course to minimize rolls, while the crew used anything they could find, such as mattresses and excess life jackets, to try to keep the bombs in place. It was a losing battle as the severe weather and 20-foot seas continued to pound the ship.

On 17 December 1969, some of the bands began to give way. At great risk, the crew continued to try to minimize the movement of the bombs, but eventually some rolling bombs punched holes in the side of the ship and she began slowly taking on water. In addition, bombs hitting each other were causing sparks. By 25 December, weather conditions had dramatically worsened with hurricane force winds and rolls up to 52 degrees. Captain Wilson issued a distress call when informed that the 2,000-pound bombs were breaking free.

At about 0830 26 December, one of the bombs in cargo hold Number 5 detonated. Although the explosion was low order, it blew a 12-by-8-foot hole in the starboard side above the waterline, blew off the hatch cover, and started fires on the stern. Although the seas were still 25 feet and winds over 40 knots, with the risk of additional explosions, Captain Wilson gave the order to abandon ship. The Greek freighter Khian Star had responded to the distress call and was by then nearby.

As the already exhausted crew commenced abandon-ship procedures, the high winds carried away two life rafts. The port lifeboat was unusable due to damage from the storm. Captain Wilson and four volunteers remained aboard the ship, while the rest of the crew (35) jammed in the one serviceable lifeboat to starboard. Upon reaching the water, the sea painter failed and the lifeboat drifted aft until it was under the hole caused by the explosion. There were fires in the hold and bombs rolling loose. The wind and sea slammed the lifeboat into the side of the ship repeatedly. At that moment, bombs began rolling out of the hole. The first just missed the lifeboat, but the second hit, causing it to capsize and the occupants to spill into the water. Wilson was unaware that the lifeboat had capsized, although one of the crewmen still on board threw life rings to men in the water.

With the threat of additional explosions, Captain Wilson and the other four crewmen went over the port side, with life rings over their life preservers, and attempted to swim to Khian Star, but only three of them made it, including Wilson. In the meantime, Khian Star had come alongside the capsized lifeboat, where some men were still clinging, and attempted to bring men aboard with Jacobs ladder, net slings and lines. Over the next several hours, Khian Star was able to rescue 14 men from the 48-degree water, but many were washed away even as they tried to climb ropes to the freighter and, to make matters worse, albatrosses even attacked some of the men in the water (although no serious injuries were incurred as a result). One Khian Star crewman dove in the water with a line attached to rescue one of the Badger State’s crewmen, who, however, was already dead. At this point, a U.S. Air Force rescue aircraft flew over and dropped six rafts, which immediately blew away. Ultimately, 26 men were lost.

By the morning of 27 December, the fires continued to spread, additional ammunition and bombs began to explode, and munitions in the forward holds had broken free. Over the next ten days, Badger State remained afloat and on fire, suffering numerous additional explosions. Consideration was given to attempting to tow and salvage the ship, but ultimately the danger was too great and the fleet ocean tug USS Abnaki (ATF-96) was ordered to sink Badger State with gunfire. However, before Abnaki opened fire, Badger State broke in two and sank on 5 January 1970. (Of note, Abnaki had towed the German submarine U-505 into Bermuda after it had been captured by the USS Guadalcanal [CVE-60] hunter-killer group [TG 22.3], commanded by Captain [later Rear Admiral] Daniel V. Gallery, in June 1944.)

Sources vary on how many men were in the lifeboat and how many were in the volunteer party that stayed aboard, and even temperature of the water. Wilson’s initial radio report differs from other accounts. In a number of sources, the math doesn’t add up. Where there are discrepancies, I used the U.S. Coast Guard Inquiry Report). In the end, 14 were saved and 26 were lost.

Khian Star would be awarded a Merchant Marine “Gallant Ship Award” by the U.S. Secretary of Transportation for her prompt reaction and extensive effort to rescue survivors.

The subsequent investigation identified numerous procedures and equipment that could be improved, particularly in the realm of loading and packing ammunition for transport. However, there were no violations of the standard operating procedures that were in effect at the time, and no instances of negligence. This was a rare case where the master and crew did everything right, as best they could, and still lost the ship (and the master was not found at fault). The investigation did note that, “The casualty may have been prevented or its effects minimized if the Master had returned to port or sought shelter as soon as the cargo started to shift after leaving port. The course of action followed under the circumstances was reasonable, however, in view of the initial success of the crew in re-blocking and bracing the cargo.”

The investigation concluded, “Throughout this ordeal the actions of the Master and crewmembers of the BADGER STATE were in the best traditions of the sea. Although their untiring efforts failed to save the vessel, the calmness and devotion to duty which they exhibited undoubtedly prevented an even more extensive loss of life.”