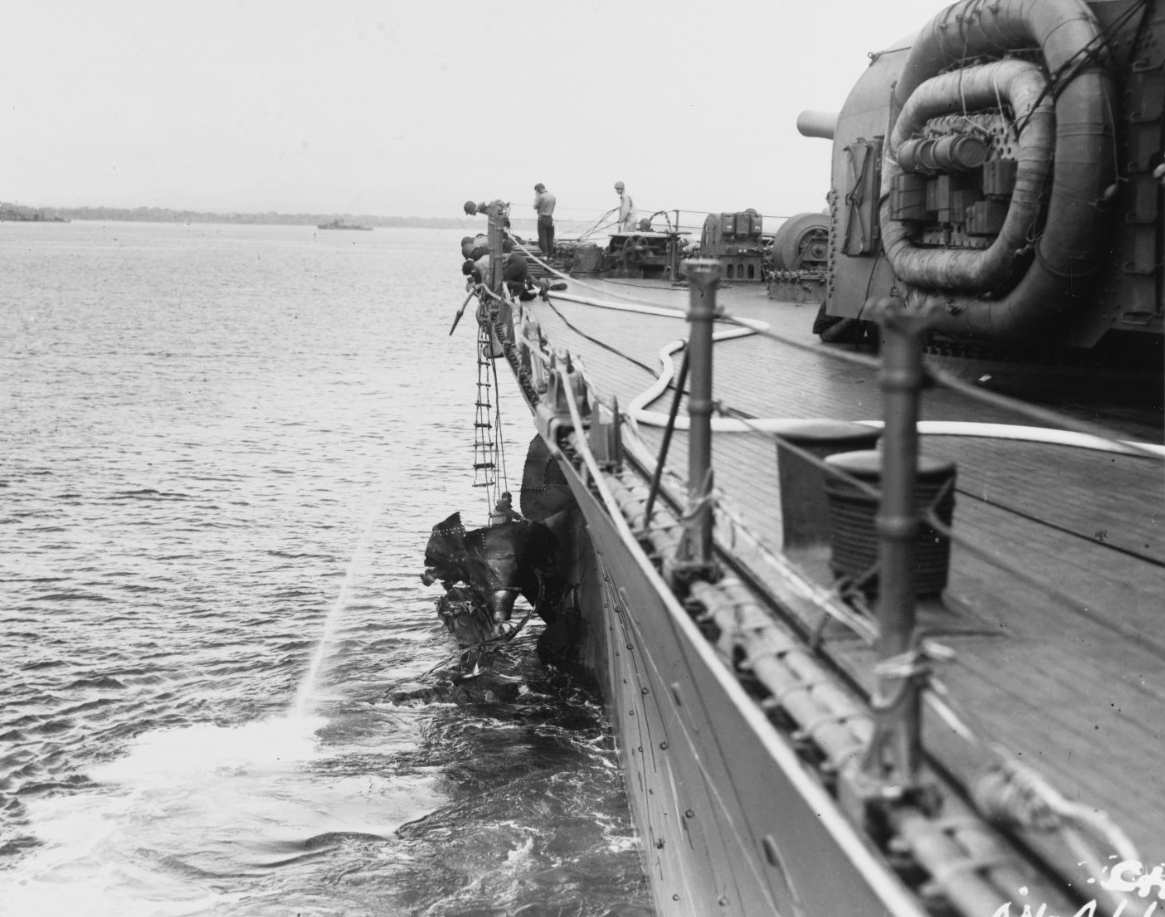 USS Chicago (CA-29) off Guadalcanal the day after the Savo Island action, showing crewmen cutting away damaged plating to enable the ship to get underway. She had been torpedoed at her extreme bow during the night action of 9 August 1942. View looks forward along her port side, with Number 1 8-inch gun turret in the upper right. Note life rafts hung on the turret side and destroyers in the distance (80-G-34685).

In the first U.S. offensive of World War II, about 5,000 Sailors lost their lives in the waters around the island of Guadalcanal between 7 August 1942 and February 1943, defending the U.S. Marines occupying the island from Japanese counterattack. The Marines paid dearly to hold the island as well: 1,152 Marines were killed on the island, along with an additional 446 Army troops who arrived later in the campaign. The Japanese surface navy did not get the memo that the tide of war had turned at the Battle of Midway (actually, literally, because the Japanese kept their losses at Midway a secret from almost everyone who didn't see it firsthand). Not realizing they were supposed to be losing, the Japanese navy repeatedly went on the attack, and for much of the campaign held the initiative. The result was seven brutal major naval battles and numerous lesser ones, including two carrier versus carrier battles on the scale of Coral Sea, and five ferocious and incredibly costly night surface actions.

The price for defending Guadalcanal paid by the U.S. Navy was two aircraft carriers (USS Wasp [CV-7] and USS Hornet [CV-8]), five heavy cruisers (plus an Australian heavy cruiser and 84 of her crew), two light cruisers, and 15 destroyers sunk, and numerous other ships of all types heavily damaged. The Japanese lost an approximately equal number of combatants (including two battleships and a light carrier) along with numerous transports with thousands of troops. So many ships were sunk in the sound between Guadalcanal and Tulagi that it became known as "Iron Bottom Sound." The U.S. Navy and Marines lost over 400 aircraft in the campaign, and the Japanese lost somewhat more (figures vary.) It was in the skies around Guadalcanal (not at Midway as commonly believed) that the cream of Japanese naval aviation was finally lost, particularly over the guns of vastly improved U.S. shipboard anti-aircraft fire.

The Japanese Navy fought with extreme tenacity, skill, and determination, and the naval battles around Guadalcanal were bookended with two of the worst defeats in U.S. naval history (Savo Island and Tassafaronga), eclipsed only by Pearl Harbor. The battles inbetween were all narrow wins or losses for either side, all with substantial casualties. In the first night battle of Guadalcanal (13 November 1942) a force of U.S. cruisers and destroyers sacrificed itself to prevent a second Japanese battleship bombardment of Guadalcanal (the first had killed 40 Marines and destroyed or damaged over half the 90 U.S. aircraft on the island) at a cost of over 1,400 Sailors, including two admirals, and all five Sullivan brothers. For much of the campaign, the Japanese navy owned the night, while U.S. aircraft from carriers and Henderson Field on Guadalcanal owned the day. Attempts by either side to challenge the other's strength usually resulted in heavy losses. Throughout the campaign, the Imperial Japanese Navy fought with great valor and gave as good as it got, frequently to the surprise of U.S. forces, which also invariably fought with great courage.  But despite severe losses, in the end it was the U.S. Navy that remained on the field, while the Japanese withdrew. The difference was that the U.S. could replace the losses in ships and aircraft, but the Japanese could not.

At dawn on 7 August 1942, the U.S. Navy landed Marines on Guadalcanal, Tulagi, and a couple smaller islands at the southern end of the Solomon Islands chain. Shortly after midnight on 8–9 August, the Japanese counter-attack came. An eight-ship (five heavy cruisers, two light cruisers, and a destroyer) Japanese force slipped undetected past two radar-equipped U.S. destroyers and attacked two groups of Allied heavy cruisers and destroyers guarding the western approaches to the U.S. invasion force, which was still hectically engaged in landing supplies to support the Marines ashore. When it was over, four allied heavy cruisers were sunk (USS Astoria [CA-34], USS Quincy [CA-39], USS Vincennes [CA-44), and HMAS Canberra [D-33], the heavy cruiser USS Chicago (CA-29) and a couple destroyers damaged, and 1,077 Allied Sailors killed in what CNO Admiral Ernest J. King would describe as the "blackest day of the war." Pearl Harbor was one thing, but to have suffered such a severe one-sided loss by a force whose very purpose was to guard against such an attack was a severe psychological blow.

At Savo Island, the Japanese fired over 1,800 rounds of 8- and 6-inch ammunition with some 230 hits, along with multiple devastating hits by Type 93 "Long Lance" torpedoes. The surprised Allied force got off 471 rounds with ten hits. Japanese casualties were minimal. The Japanese commander, Rear Admiral Gunichi Mikawa, did not know that only one heavy cruiser and two light cruisers were the only major ships between him and dozens of U.S. supply ships and troop transports. But, fearful of being attacked by U.S. carrier aircraft at dawn (and not knowing that the three U.S. carriers supporting the landing were already steaming away from the area), and having received wildly inflated reports about how many U.S. ships had been destroyed in three major Japanese air attacks over the previous two days, Mikawa opted to withdraw back to Japanese bases over 500 miles to the northwest. Mikawa's decision, roundly and somewhat unfairly criticized over the years, spared the vulnerable U.S. supply ships and troop transports. Nevertheless, with no air cover, and concerned over a follow-on night surface attack, the result was an ignominious withdrawal of U.S. Navy forces the next day from the immediate Guadalcanal area, effectively leaving the Marines ashore to fend for themselves, and leading to the oft-repeated statement that the U.S. Navy abandoned the Marines at Guadalcanal (although at that time the only Japanese remaining on the island were the remnants of construction units that had been building the airfield). The only bright spot of the entire action was that the old U.S. submarine S-44 torpedoed (using older Mark 10 torpedoes) one of Mikawa's cruisers, the Kako, as she was returning to port, the first Japanese major combatant sunk by a U.S. submarine in the war. For more on the disaster at Savo Island please see attachment H-009-1.

The attached photo (H-009-2) from NHHC's collection, taken by a Japanese cruiser at the Battle of Savo Island, shows the heavy cruiser USS Quincy (CA-39) burning and sinking while caught in the glare of Japanese searchlights.  The valor of Quincy was noted by Rear Admiral Mikawa: Quincy had charged the Japanese cruiser line and nearly took out Mikawa and his staff with a hit to his flagship's chart room.

For those who may have missed it, I am also re-attaching H-008-3: "Torpedo Versus Torpedo" from my previous H-Gram, because the sections on Japanese and U.S. surface torpedoes and tactics explain a lot of what happened at Guadalcanal. In a future H-Grams, I plan to write on the U.S. development of radar, which also had significant impact on the campaign, although immaturity of radar technology, lack of U.S. commanders' understanding of the strengths and limitations of that technology, and tactics that had not kept pace with the technology frequently worked to the U.S. Navy's disadvantage.

In the last H-Gram I discussed how one of the contributing factors in the fire aboard the USS Forrestal was a shortage of Mark 83 1,000-pound bombs and the substitution of unstable older bombs. The shortage was due to the fact that in 1967 the U.S. Navy was conducting the most sustained bombing campaign in our history. Jets flying from U.S. aircraft carriers on "Yankee Station" flew thousands of sorties against targets in North Vietnam. Because of the 100th anniversary of World War I and 75th anniversary of World War II, I have not had a chance to cover the significant developments in the naval campaign in Vietnam in 1967 (or in the years prior to that.) To help remedy that, I asked one of my historians, Dr. Richard Hulver, to put together a "catch-up" piece covering the war in Vietnam, with emphasis on U.S. Navy involvement, and that is attachment H-009-3. With this background, I will endeavor to cover more about the U.S. Navy in Vietnam in the future because there are incredible accomplishments and valor that deserve to be remembered.