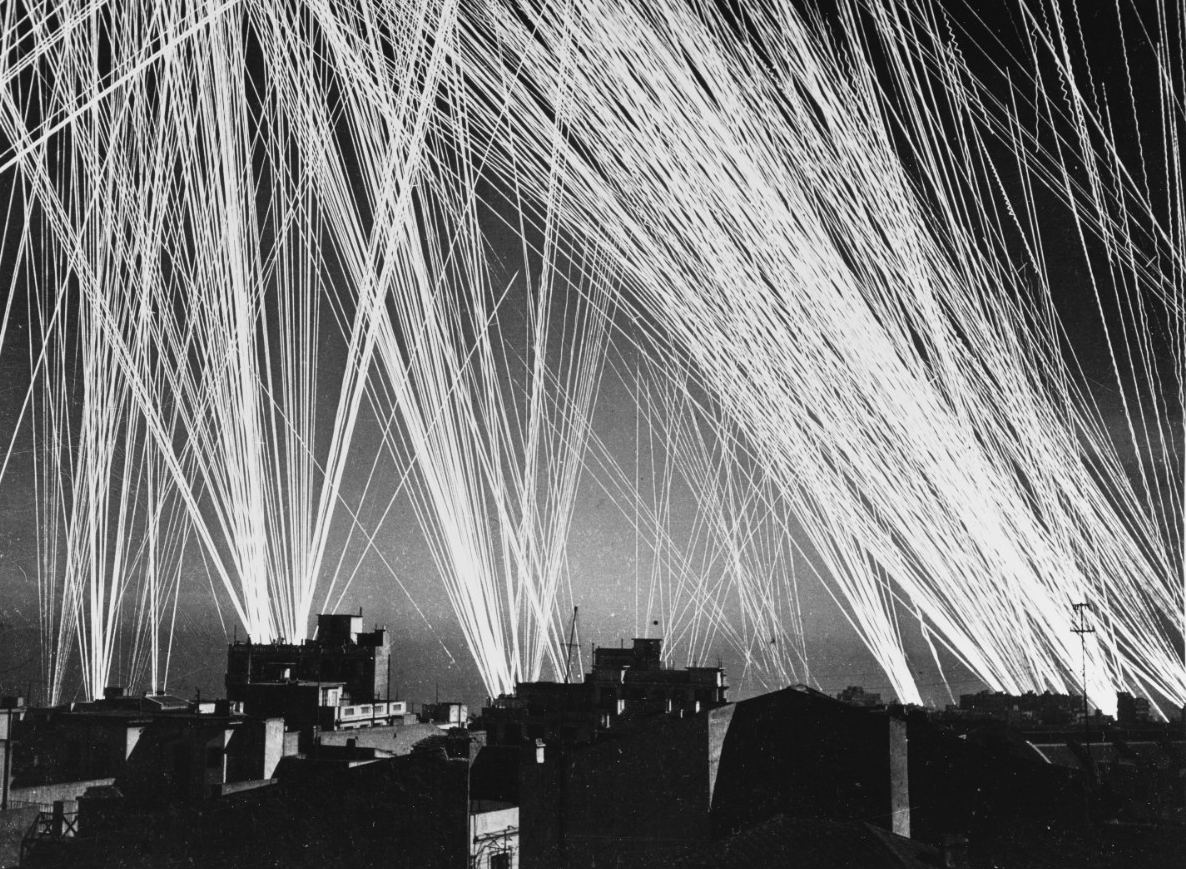 Anti-aircraft fire over Algiers: One of the many nighttime German air raids on Allied shipping in port and off the coast of Algeria, 1943 (SC 182245).

On 26 November 1943, a German Hs-293 radio-controlled, rocket-boosted glide bomb hit and sank His Majesty’s Transport (HMT) Rohna off the coast of Algeria, resulting in the deaths of 1,149 crew and passengers, including 1,015 U.S. Army troops (plus 35 U.S. soldiers who subsequently died from wounds.) The loss of Rohna constituted the greatest loss of U.S. life at sea due to enemy action.

Although the sinking of USS Arizona (BB-39) and USS Indianapolis (CA-35) are far better known, the greatest loss of U.S. life “at sea,” due to enemy action, was actually suffered by U.S. Army troops aboard His Majesty’s Transport (HMT) Rohna off the coast of Algeria on 26 November 1943, when Rohna was sunk by a German guided glide-bomb. The U.S. Army lost 1,015 troops, and another 35 subsequently died from wounds. Indianapolis lost 879 U.S. Sailors by a Japanese submarine attack in the Philippine Sea.

On 25 November 1943, Rohna departed Oran, Algeria, and joined Gibraltar-to-Suez Convoy KMF-26.  Rohna was an 8,600 ton, coal-burning passenger/cargo ship owned by the British India Steamship Company and requisitioned by the British for use as a troop transport. In addition to her Australian and British officers and mostly Indian crew, and 18-man British DEMS (Defensively Equipped Merchant Ship) detachment, aboard were 1,981 U.S. Army Soldiers. The U.S. Soldiers were destined for India to build B-29 bomber bases, and were mostly from the 853rd Engineer Battalion (Aviation) along with the 322nd Fighter Control Squadron, 31st Signal Construction Battalion, the 44th Portable Surgical Hospital, and several other “filler” units.

One of the rationales for invading Italy at Salerno (see H-gram 021) was to knock Italy out of the war to ease pressure on the long, vital, and vulnerable supply line from Gibraltar to Suez. However, even though Italy dropped out of the war and officially switched sides, the Germans just occupied many of the Italian airfields and ports and continued to attack Allied shipping in the Mediterranean. In but one attack, on 6 November 1943, the destroyer USS Beatty (DD-640) was hit by a German aerial torpedo while defending Convoy KMF-25A from a 25-plane German air raid off Algeria. The two planes that attacked Beatty were actually showing American Identification Friend or Foe (IFF) signals, but were correctly identified as German Ju-88 bombers. Beatty engaged, but in the smoke and haze, one was able to get close enough for a torpedo launch. Although the torpedo explosion broke the ship’s back, Beatty’s crew fought valiantly for more than four hours to save their ship, but the damage was too severe and she finally went down; the majority of her crew were saved.

On the late afternoon of 26 November, off Bougie, Algeria, Convoy KMF-26 was attacked by about 30 Luftwaffe bombers, mostly Heinkel He-177A “Greif” ("Griffin") long-range bombers, in two major waves. Four Free French Spitfire fighters put up spirited defense, followed later by several British RAF fighters. German bombers dropped many bombs in a horizontal mode, with the usual lack of success for that kind of attack. However, the He-177As dropped 42 Hs-293 radio-controlled, rocket boosted, glide bombs (also see H-Gram 021) against the convoy. (The Hs-293 had a 650 lb. warhead and a range of about 6.5 NM when dropped from about 4,600 feet, which achieved high speed with a 10-second burn by a liquid-fueled rocket motor, and was designed for use against unarmored ships.)

Despite the size of the attack, extensive anti-aircraft fire from the convoy and prolific use of smoke and maneuver all served to spoil the Germans’ aim. In addition, at least six of the guided bombs were successfully drawn off target by new radio-jamming equipment on some of the convoy escorts.  The German operators had to keep both the bomb and the target ship in sight throughout the bomb’s entire flight, a significant weakness. The German’s paid heavily for the attack. Four of the new He-117As were shot down with the group commander aboard one of them, and three more made it back to base but were not flyable afterwards. Several other German aircraft were shot down as well by determined and effective anti-aircraft fire from the convoy ships (even the old Rohna was festooned with a variety of AAA weapons and contributed to the barrage).

At about 1715–1725, during second wave attacks, Rohna was hit by an Hs-293, the only one of the 42 launched to score a direct hit on its target, although there were numerous other near misses on the escorts and the convoy ships. The bomb hit Rohna’s port side, penetrated deep into the ship on delayed-fuse, and blew holes in the starboard side, quickly causing the ship to list to starboard. About 300 U.S. Army troops were killed in the blast or never made it off the ship. The bomb hit about 15-inches above the waterline, but nevertheless the starboard holes flooded the engine room, knocking out electrical power, including to the pumps, and set the Number 4 hold on fire. The blast also destroyed six of 22 lifeboats, and buckled plates on the port side so that no boats on the port side could be launched.  Ultimately, only eight lifeboats could be launched, which turned out not to be in very good condition to begin with. All but two of the lifeboats that did get in the water were quickly overloaded, swamped and sunk. Although 101 rafts of various kinds (and condition) went into the water, most of the Army troops had to swim.

Although accounts of 15- to 20-foot seas are probably exaggerated, there was a stiff breeze and significant swell, and the water was cold, resulting in the quick onset of hypothermia. Some later accounts accused some of the Indian crewmembers of unprofessional conduct, contributing to additional deaths, but accounts by Lieutenant Colonel A. J. Frolich, the senior U.S. Army officer, and other witnesses indicated that the Indian crew behaved as well as could be expected under the circumstances, most of them were manual labor not trained for such a situation. Rohna’s British-manned anti-aircraft guns continued to fire even as the ship was sinking. The ship’s Australian master, Captain T. J. Murphy, the chief, 2nd officer, 3rd officer. and four U.S. Army personnel were the last to abandon the ship before she broke up and sank by the stern about 90 minutes after being hit.

Convoy KMF-26 had a pre-planned response in the event of the loss of a ship, with specific ships designated to conduct rescue operations. As the burning and sinking Rohna fell behind the convoy, in accordance with the plan, the Auk-class minesweeper USS Pioneer (AM-105), under the command of Commander LeRoy “Roy” Rogers—in command since 27 August 1943—immediately swung into action despite continuing German bomb and strafing attacks. Pioneer had barely missed being hit by a bomb during the attacks, and she had put up such a volume of anti-aircraft fire thought she was on fire. Other designated ships dropped behind the convoy as well, including the cargo ship Clan Campbell and the corvette Holcomb to assist in rescue operations. The British destroyer HMS Atherstone laid a smoke screen and provided protection against air or submarine attack when the other ships were vulnerable while rescuing survivors. The wind and sea state were bad enough that it was not possible to launch boats, and the rescuers were racing the clock in the gathering darkness as survivors succumbed to hypothermia.

Pioneer mounted a very aggressive rescue effort, aided by a lower freeboard than Clan Campbell.  Sailors in Pioneer’s 122-man crew demonstrated extraordinary courage as many dove into the cold water and rough seas, some tied with rope and some not, to assist soldiers who were quickly becoming too weak to climb ropes or cargo nets. The evolution was dangerous, as a number of Soldiers were killed by Pioneer’s props, or were sucked under the ship as she heaved up and down. Nevertheless, the crew of Pioneer worked into the night, bringing 606 survivors on board, quickly causing the ship to become top-heavy. Despite the risk, Pioneer’s skipper ordered the use of searchlights and continued rescuing survivors until no more could be found in the dark, and there was literally no more room to bring any more aboard. Among the survivors brought on board was Frolich (misspelled Frolick in Pioneer’s log,) who was the senior Army officer aboard Rohna. Six of the survivors would die from wounds or the effects of exposure in the water before they could reach hospitals ashore.

Clan Campbell, despite the challenge of her high freeboard, rescued 110 survivors. Atherstone joined in after dark, rescuing another 70. British sailors on Atherstone performed the same kind of heroics to rescue U.S. soldiers as those on Pioneer. Several other ships, including the tug Mindful, rescued a number more, also displaying great determination and courage to rescue as many as possible. In the end, 1,149 personnel were lost in the sinking of the Rohna. This included five officers and 117 Indian sailors of Rohna’s 195-man crew, one member of the British DEMS detachment, and one hospital orderly. U.S. casualties included 1,015 lost during the sinking. Afterward, another 35 U.S. Army personnel died, making the total U.S. loss 1,050. Of 30 officers and 793 enlisted men in the 853rd Engineer Battalion, 10 officers and 485 enlisted men were lost.

Following the landings at Salerno in September 1943, the Allies had become painfully aware of the development and employment of German guided bombs and the limited means to counter them. In order to prevent the Germans from learning how effective the guided bomb had been against Rohna, the entire matter was classified, and wartime censorship was used to delay any public revelation of the number of casualties and to prevent specific details from becoming public knowledge. The secrecy prevailed for many years after the fact, and until the 1960s, only those who were involved in the incident had significant knowledge. The tragedy was not covered in the standard histories of World War II. For example, Rear Admiral Samuel Eliot Morison’s History of U.S. Naval Operations in World War II does not mention it. In some cases, veterans of the sinking had difficulty proving that their injuries resulted from the sinking, because there was no publically available documentation that the event even occurred. In addition, neither the commanding officer of Pioneer, the crew, nor the ship received any formal recognition from the U.S. Navy for their valor in rescuing so many of the survivors (few if any would have survived the night). Not until the passage of House Concurrent Resolution No. 408 in October 2000 did the soldiers and sailors aboard Rohna and USS Pioneer receive U.S. government recognition for their courage and sacrifice.