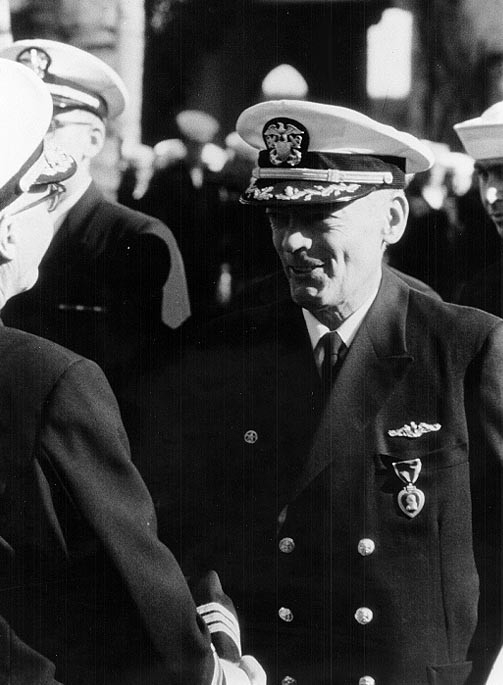 Commander Lloyd M. Bucher, USN, former commanding officer of USS Pueblo (AGER-2) receives the Purple Heart medal for injuries he received while he was a prisoner of the North Koreans, in ceremonies held in 1969, shortly after he and his crew were released. Pueblo and her crew were captured off Wonsan, North Korea, on 23 January 1968. The crew were released on 23 December 1969 (NH 75565).

The Seizure of the USS Pueblo (AGER-2)

On 23 January 1968, an overwhelming force of North Korean naval vessels fired on and hit USS Pueblo (AGER-2) before boarding and seizing the ship in international waters off the east coast of North Korea. At the start of the incident, Pueblo was dead-in-the-water about 16 nautical miles from the nearest North Korean territory (an island), conducting an intelligence-collection mission. During the attack, one U.S. crewman (Fireman Duane Hodges) was mortally wounded and would die before the ship reached North Korean port. Ten other U.S. crewmen, including the commanding officer, Commander Lloyd M. "Pete" Bucher, were wounded to varying degrees. Pueblo initially maneuvered to avoid being boarded, but Bucher determined that armed resistance was futile. After capture, Pueblo’s surviving crew of 82 (including two Marines and two civilians) would endure months of torture, beatings, food deprivation, and inadequate medical care before being released in December 1968. Some of Pueblo's crew would be paraded before camera at an international news conference to demonstrate how well they were being cared for, during which several of the crewmen displayed the "Hawaiian Good Luck Symbol" (their middle finger). More torture ensued when the North Koreans learned the true meaning of the gesture. Bucher's crew would receive one Navy Cross, two Silver Stars (one posthumously, for Hodges) and six Bronze Stars (with Combat V), mostly for their actions during captivity. Bucher's decision to place the lives of his crew ahead of the axiom "Don't Give Up the Ship" would be one of the most hotly debated in U.S. Navy history. For more on the USS Pueblo, please see the attachment H-014-1.