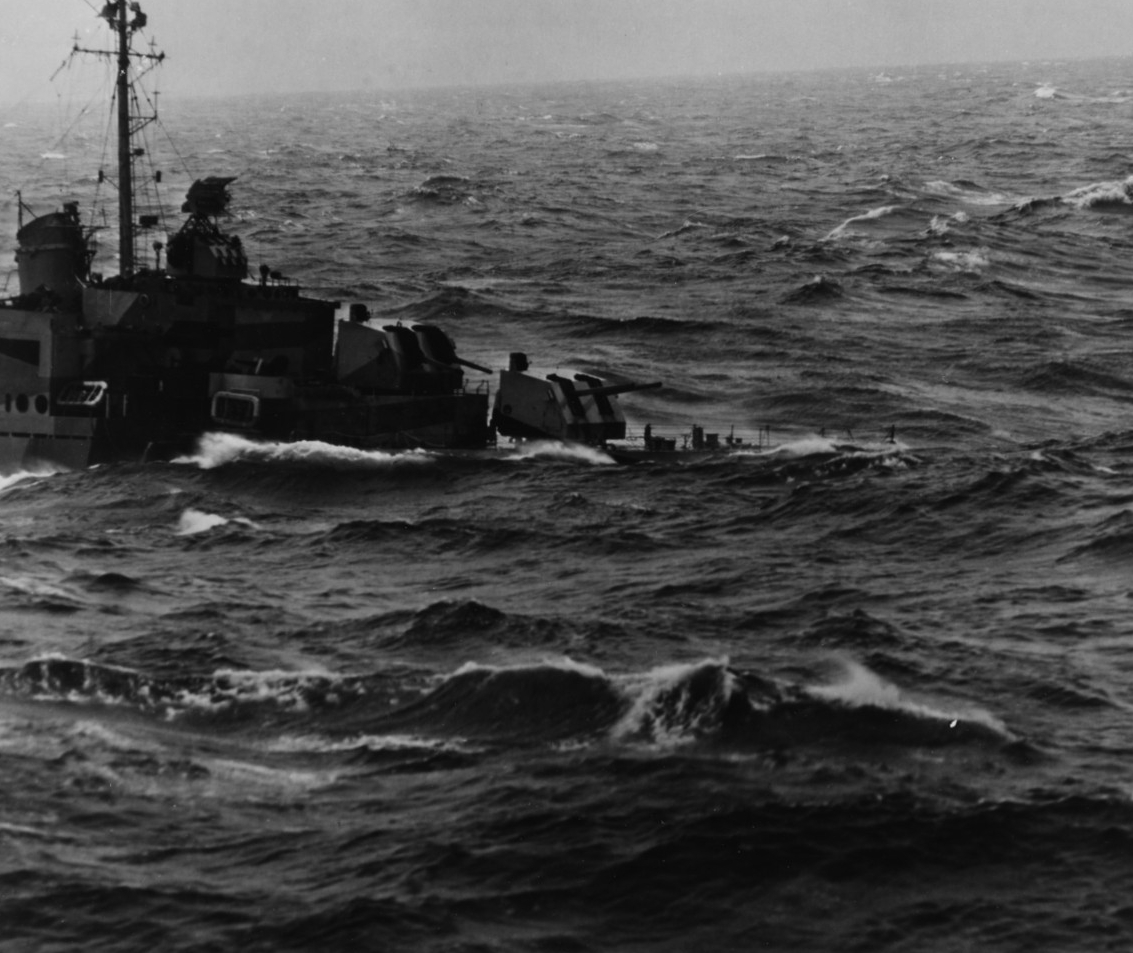 Replenishment day was always a welcome day of respite from the rigors of war—a pleasant time in a safe zone where there was temporary relief from the interminable recurrences of General Quarters, Torpedo Defense, Flight Quarters, and other necessary activities of an alert, ever-ready force within range of enemy aircraft. It was a holiday from the tensions, the incessant alerts, and the stresses that came from day after day of watch-standing, steaming offshore, launching air strikes, recovering aircraft sometimes shot full of holes, and performing necessary day-to-day maintenance and upkeep of ships and aircraft. A holiday spirit prevailed throughout the Task Group on these special days: Station-keeping was a bit more lax, and gun crews were off duty so that the gunners could lubricate, adjust and bore-sight their guns. Sailors were free to laze about the decks with shirts off, smoke (when not actually alongside the oiler or ammo ship), and absorb the sun’s welcome, warm rays.

Unfortunately, not all replenishment days were peaceful or relaxing. The weather occasionally didn’t cooperate, and the development of storms, which could slip in undetected, spoiled some planned operations, including those necessary replenishment appointments. Although the meteorologists (called “aerologists” or “aerological officers”—or sometimes “weather guessers”—in those days) did their best with the limited information available to them, but they frequently missed on their predictions of the weather. The flagship had a weather guesser aboard, as did each of the carriers. These men frequently conferred by radio before making a joint forecast and notifying the ships of their estimates of future conditions. Sometimes, however, they didn’t have enough information to predict accurately, so their joint forecasts were wrong.

In mid-December 1944, one storm slipped through while Task Force 38 was in the Philippine Sea preparing to support the landings on Luzon. Eager to replenish nearly empty fuel tanks and aviation gasoline (AVGAS) tanks depleted from earlier strafing and gunfire attacks on enemy positions on Luzon, and anxious to enter the actual landing-support operations with full tanks, Admiral William F. Halsey, Jr., Commander Task Force 38, ordered a replenishment and refueling day despite heavy seas and 30 to 40 knots of wind.

The carriers always went alongside the tankers first; their need for AVGAS took priority over everything else. Independence (CV-22), operating only night fighters and night searchers, returned from her solo all-night operations (which placed a heavy demand on her fuel and AVGAS) and was given priority so as to be able to get her “drink” at first light. She approached a heavily-laden tanker that was wallowing in the seas and taking green water over her bow. The Chief Warrant Boatswain in the foredeck of Indy shook his head in disbelief at the rough conditions, and said to me, his division officer, “This is going to be rough.” I ordered all of my division on the foredeck crew to put on life jackets and safety lines as they set about getting a towline over to the oiler.

In those days it was customary to use a towline from the carrier to the tanker. It was not actually used for towing but served as a breast line to assist the officer of the deck in maintaining a safe position. Many ship commanding officers were fearful of the suction caused by the Bernoulli effect: two ship hulls proceeding close together on parallel courses at the same speed. The towline, therefore, enabled the officer on deck to hold a slight port rudder (we always fueled on the starboard side) throughout the refueling period, keeping pressure on the towline and thus avoiding getting too close and having the ships be sucked together, which would cause topside damage to both. Later in the war it was determined that the towline was unnecessary, since an attentive officer on deck and a good helmsman could keep the ships apart. In this way, the Bernoulli effect would not come into play unless the ships came very close together.

Independence used an eight-inch manila hawser for a towline. (Hawsers of that size are designated by their diameter, in this case eight inches.) The hawser was heavy and unwieldy, and the deck crew struggled manfully on this wet, stormy morning to get it ready for passing over to the oiler. After several tries the line-throwing gun got the white line over, and it was attached to a heaving line, which was attached to a three-inch manila, to which was attached the eight-inch towline. When the towline was pulled over and made fast to the oiler, the hoses went over, and fueling began. Before long the boatswain asked me to call the bridge and report that the strain on the towline was excessive. He recommended fueling be terminated as soon as possible. I conveyed the message, but the need for AVGAS was critical, so the Officer of the Deck said we should continue as long as we could.

As much AVGAS as possible was pumped rapidly. Soon I ordered all hands off the foredeck. We all retreated to a safe area between the forward 40-mm gun mount and the forward bulkhead. Within moments after the foredeck had been cleared, the eight-inch towline parted, and whipped back across the deck and hit the 40-mm gun shield with astounding force, bending the half-inch steel armor plate. Fortunately, no one was hurt. The officer on deck on the bridge saw the casualty and immediately stopped fueling operations, breaking away while not completely topped off but with sufficient fuel and AVGAS to meet the next operation.

Meanwhile, the weather continued to deteriorate. Unknown to the forecasters and undetected by any shore-based weather stations, a full-scale typhoon was moving rapidly into the Philippine Sea and Task Force 38 was directly in its path. Most of the ships had emptied their seawater ballast in preparation for taking on fuel, and some were reluctant to add sea-water ballast back into their oil tanks, both because of the possible contamination of fuel and because of the time required to pump them down again and take on fuel.

All were caught by surprise. The result was disaster. Three destroyers—Hull (DD-350), Spence (DD-512), and Monaghan (DD-354)—capsized and sank with heavy loss of life; six or seven other ships were badly damaged. The Independence lost her forward 40-mm quad gun mount, which was swept away, and the forward edge of the fight deck was rolled back about 15 feet.

The worst of the storm hit just before noon. Great pyramidal waves built up and crashed into the ship. It was frightening to look up from the flight deck, which was some 60 feet above the waterline, and see giant waves towering another 30 feet above, almost obscured by the spray and spume whipped off by a monster wind. After the fueling was finished, I was assigned to patrol the flight deck, which was rigged with vertical spoilers (six foot metal posts attached to the tie-down racks) to break up the direct wind. My orders were to check the safety of the planes and pass information to the bridge on the status of planes strapped with wires and ropes to the tie-down racks of the flight deck. On one trip around the deck, as I held on to the spoilers to avoid being blown overboard, I glanced aloft at the anemometer, its three cups whirling furiously, only to see it spin off its mounting and, still spinning madly, fly across the flight deck and into the sea on the port side. When I went to the bridge to take the noon to 1600 officer-on-deck watch, I asked the quartermaster about the wind velocity. He reported that before the anemometer disintegrated the wind had registered 114 knots.

By this time it was no longer possible to steam in formation. After being ordered by CTF-38 to proceed independently, all ships were making their way in a northerly direction, heading into the seas and wind. As officer of the deck, I was in charge of maneuvering the ship, and avoiding other ships became my primary concern. Under the watchful eye of our captain, who was monitoring the radar repeater and incoming radio orders in the closed bridge one deck below, I, on the open bridge for better visibility, posted extra lookouts and headed into the wind and waves, crashing bow-on into each one (which caused the damage to our flight deck’s forward edge) but avoiding the dangerous rolling any other course would produce. Occasionally a destroyer was sighted as it slid by, using engines and rudder to avoid collision but nonetheless almost uncontrollable. By now all ships had ballasted, either with fuel received before their hoses parted, or with salt water pumped into their tanks to fill the voids left by failure to complete fueling.

Independence was fortunate. Two planes broke loose on the hangar deck and their ruptured fuel tanks spilled many gallons of 100-octaine aviation fuel. The members of our Marine company attached to the ship, whose compartment was just below the hangar deck, smelled the gasoline fumes and came storming up their hatch to the hangar deck. There, armed with the only available bailing tools—metal dust pans to bail and galvanized steel garbage cans to bail into—they were able to collect all of the dangerously volatile liquid and dump it over the side. Fortunately there were no sparks and no fires.

Two damage-control panels stored for use in repairing battle damage—3/4-inch steel plates, 6 feet by 6 feet square—broke loose in the chief’s quarters (which ran athwartship), and with each roll the plates became huge steel blades, slicing their way through all in their path and making the compartment uninhabitable. All of the legs of the tables and chairs in the compartment were chopped off after a few rolls.

Safety returned only when one of the chief petty officers, holding a lighted welding torch and hanging from the overhead to escape the rampaging plates, managed to spot-weld them to the deck where the welds stopped their destructive trips from side-to-side.

Eventually the storm moved away. The exhausted task force made its way to safe waters and returned to Ulithi, where it spent a sad but thankful Christmas season. Finally able to replenish stores, ammunition and fuel, the crews repaired their ships’ damages and prepared to support the Luzon landings.

Total replenishment at sea today is a routine procedure. However, in WW II, it was an innovation, one of the most effective new tactics perfected during the Pacific War. Not only did it enable the Fast Carrier Task Force to reach great distances from the nearest re-supply bases and to sortie its ships for more extensive campaigns, but it also permitted keeping constant pressure on the enemy for longer periods. On one such strike series, Independence was underway for 63 continuous days, and all needs (except rest and recreation) were satisfied by frequent replenishment at sea. As a result, there was no letup in the devastating, around-the-clock air attacks on the enemy (made possible by night-operating planes from our carriers—first Independence, and later joined by others), giving the Japanese no chance to regroup and repair damage between strikes. The strategy of using alternating task groups—one to strike and then to replenish while another was striking—assured ceaseless, relentless strikes from which the enemy never recovered.