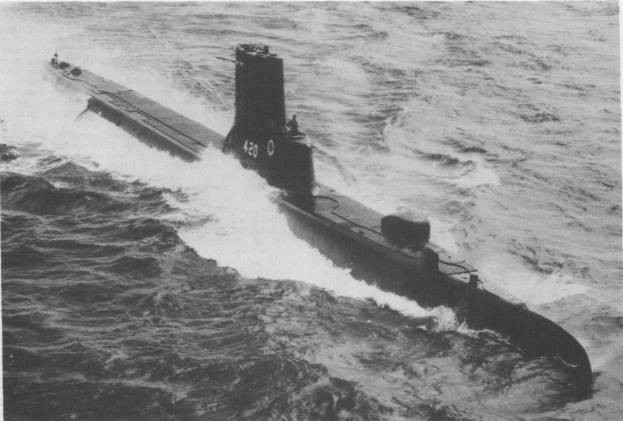 Caption: Tirante (SS-420) as a streamlined Guppy IIA submarine, July 1962. A sonar dome is prominent on her forecastle.

A silvery, enlongated "cutlass fish" found in waters off Cuba.

Following shakedown training in Long Island Sound and training in waters off Panama and off Oahu, Hawaii, Tirante departed Pearl Harbor on 3 March 1945, bound for Japanese home waters. Prowling to the westward of Kyushu, the submarine patrolled the approaches to Nagasaki. She had good hunting. She sank the 703-ton tanker Fuji Maru on 25 March and followed this success with the sinking of the 1,218-ton freighter Nase Maru three days later. After the latter attack, Japanese escorts kept Tirante down for seven hours, before she slipped away from her hunters, unscathed.

On 31 March, Tirante shelled and sank a 70-ton lugger with 5-inch and 40-millimeter gunfire and, on 1 April, missed an LST-type vessel with a spread of three torpedoes. The submarine soon shifted to waters off the south coast of Korea, near the Strait of Tsushima. At twilight on 6 April, she battle-surfaced and captured a small Japanese fishing vessel and took its three crewmen prisoner before sinking the prize.

The following day, Tirante torpedoed a 2,800-ton cargo freighter loaded with a deck cargo of oil drums. The submarine surfaced, looked over the debris, and directed nearby Korean fishing craft to pick up two survivors who were clinging to pieces of wreckage. Nevertheless, although observers on the submarine reported witnessing the Maru's sinking, post-war examination of Japanese records failed to confirm the "kill."

Having broken the Japanese codes, American naval intelligence men were able to anticipate Japanese movements. One intercepted enemy message told of an important convoy steaming toward Tirante's area. In response to this information, the submarine laid an ambush on 9 April. Picking out two targets, she fired three torpedoes at each. One spread missed, but the other struck the 5,500-ton transport Nikko Maru, carrying homeward-bound Japanese soldiers and sailors from Shanghai. As the important auxiliary slipped beneath the waves, enemy escorts leapt to the offensive. To ward off the counterattack, Tirante fired a "cutie" (homing torpedo) at one of the escorts and heard subsequent "breaking-up noises." But again, post-war accounting failed to confirm the sinking.

Tirante resumed her relentless prowling of the Yellow Sea between Quelpart Island (Cheju Do) and the mouth of the Yangtze. She soon received an intelligence report which informed her that an important Japanese transport was at Cheju, the main port on Quelpart Island. Under cover of darkness, Tirante boldly began her approach on the surface. In defiance of possible enemy radar or patrolling planes or ships, she closed the coast and penetrated the mine- and shoal-obstructed waters within the 10-fathom curve line. Prepared to fight her way out, Tirante then entered the harbor where she found three targets: two escort vessels and the 4,000-ton Juzan Maru.

The submarine launched three torpedoes at the maru, which blew up in an awesome explosion. The conflagration clearly illuminated Tirante and alerted the Mikura-class escort vessel Nomi and Kaibokan No. 31 which immediately got underway toward the invading submersible. While she headed back out to sea at flank speed, Tirante launched a spread of torpedoes which hit and destroyed both pursuers. En route to Midway, the submarine captured two Japanese airmen (bringing her prisoner total to five) and concluded her first war patrol on 25 April.

Tirante's stellar performance earned Comdr. Street the Medal of Honor. Lt. Edward L. Beach, the executive officer-and later commander of Triton (SSRN-586) during the submarine's submerged circumnavigation of the globe-received the Navy Cross. The ship, herself, was awarded the Presidential Unit Citation.

Tirante departed from Midway on 20 May as command ship of the nine-boat "wolfpack" dubbed "Street's Sweepers." They patrolled the Yellow and East China Seas on the lookout for enemy targets, by then dwindling in number. Tirante located a four-ship convoy on 11 June, in the familiar hunting grounds off Nagasaki. She evaded the three escorts long enough to get a shot at the lone merchantman, an 800-ton cargo freighter, and pressed home a successful attack. Post-war Japanese records, though, do not confirm a "kill."

The next day, Tirante pulled off nearly a repeat performance of her hit-and-run raid at Cheju. She crept into Ha Shima harbor, some seven miles from Nagasaki and picked out the 2,200-ton Hakuju Maru moored alongside a colliery. From a range of 1,000 yards, the submarine fired a "down the throat" shot at the cargoman which exploded with a roar. The second "fish" failed to detonate, but the third completed the destruction begun by the first. As shells from shore guns fell around her, Tirante bent on speed and cleared the area.

Resuming her roving patrols, Tirante and her sisters played havoc with shipping between Korea and Japan, destroying junks carrying supplies from Korea to the Japanese home islands. Boarding parties from the submarine would take off the skippers for questioning, put the crew in life boats, and set the craft afire. Tirante bagged a dozen in this manner and also destroyed two heavily armed picket boats with surface gunfire before returning to Guam on 19 July.

Tirante departed Guam on 12 August on what would have been her third war patrol. The end of the war, however, cut this operation short and the submarine put into Midway on the 23d. Eventually sailing for the east coast of the United States, Tirante moored at the Washington Navy Yard in October, at which time Comdr. Street received his Medal of Honor in a White House ceremony. Shifting to Staten Island, N.Y., on 31 October, the submarine remained there until moving to New London, Conn., on 8 January 1946. After conducting training operations out of New London, Tirante was decommissioned and placed in reserve on 6 July 1946 at her Connecticut home port.

Subsequently converted to greater underwater propulsive power (GUPPY) configuration, Tirante was re-commissioned on 26 November 1952, at the Portsmouth Naval Shipyard. After conducting her shakedown to Bermuda and operating in the Atlantic as far north as Iceland, the submarine returned to the east coast of the United States to prepare for her first deployment with the 6th Fleet.

In the ensuing two decades, Tirante conducted six more Mediterranean deployments, interspersed with a regular schedule of exercises and maneuvers with Fleet units in the North Atlantic, off the east coast and in the Caribbean and the Gulf of Mexico. The ship participated in joint exercises with NATO forces; sometimes served as a target for antisubmarine warfare exercises; and, on occasion, assisted the Fleet Sonar School at Key West, Fla., in the development of ASW tactics and weapons.

Decommissioned at Key West, Fla., on 1 October 1973, and struck from the Navy list the same day, Tirante was sold on 11 April 1974 to Union Minerals and Alloys of New York, for scrapping.