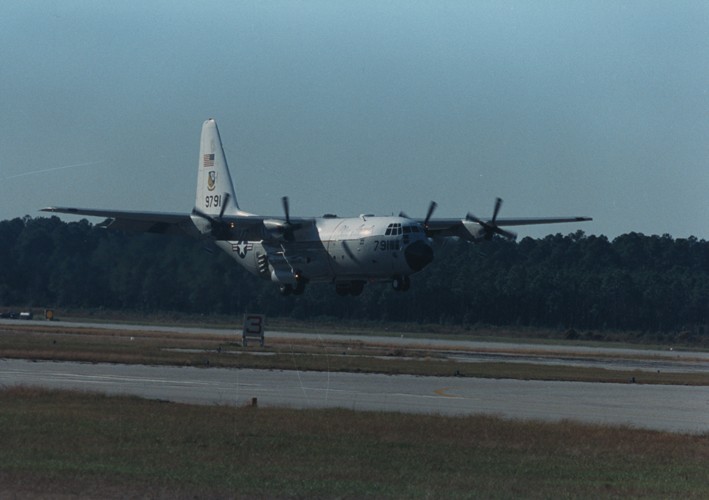 The C-130 Hercules first entered naval service in 1960 when four LC-130F's were obtained for Antarctic support missions. These ski-equipped Hercules were soon followed by 46 KC-130F models procured by the Marine Corps in 1962 for the dual role of assault transport and aerial tanker for fighter and attack aircraft. That same year the Navy obtained seven C-130F's without inflight refueling equipment to serve its transport requirements. The Hercules, initially designed to specifications laid down by the USAF Tactical Air Command, first flew as the YC-130 in August 1954. The KC-130F made its first test flight in January 1960 as the GV-1 under the old Navy designation system. The tanker version can refuel two aircraft simultaneously from the 3,600 gallons in its cargo compartment. The fuel is routed to two detachable pylon pods located below the outer wing, containing refueling gear.

The C-130F, identical to the tanker, less refueling equipment, can transport cargo or personnel and deliver its load by either the normal method or by airdrop. An integral cargo ramp/door and removable roller tracks facilitate the handling of palletized loads. In its passenger-carrying role the Hercules can accommodate 92 combat troops or 64 paratroops with equipment. For medical evacuation, 74 litters may be rigged in the cargo area.

In 1965 the Navy procured a number of C-130G's to provide support to Polaris submarines and the exchange of their crews. Essentially the same as the F model, these aircraft have increased structural strength, allowing higher gross weight operation. All models feature crew and cargo compartment pressurization, single-point refueling and a Doppler navigation system.

One other model, the EC-130Q, served in two VQ squadrons. This version had a permanently installed VLF radio transmitter system used to supplement shorebased communications facilities and acted as strategic communications aircraft, communicating with ballistic-missile submarines, under the TACAMO program.

The Hercules also flies with the Coast Guard as the HC-130B, performing air-sea rescue. In addition, C-130's are used by more than 50 foreign countries.

The Hercules probably is the most versatile tactical transport aircraft ever built. Its uses appear almost limitless: transportation, electronic surveillance, search and rescue, space-capsule recovery, helicopter refueling, landing (with skis) on snow and ice, gun ship and special cargo delivery. It has even landed and taken off from a carrier deck without benefit of arresting gear or catapults.