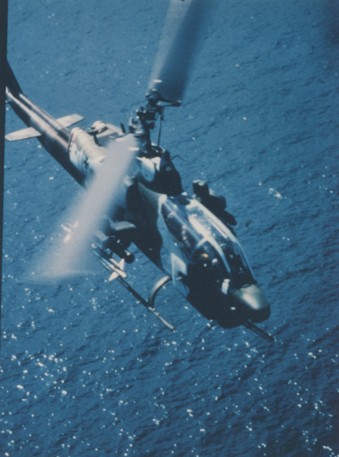 Armed helicopters came into widespread use in Vietnam in the early Sixties. Limitations of the modified armed utility helicopters used led to the specially configured attack helicopter.

While the Army went forward with its sophisticated AAFSS (advanced aerial fire support system) program to provide an attack helicopter, Bell proceeded with another company-sponsored prototype, Model 209, using the Huey dynamics and an airframe similar to the initial design. The 209 first flew in September 1965. The urgent need for greater armed helicopter performance in Vietnam and the success of the 209 led to Army orders for prototypes and production models of the 209 as interim attack helicopters, pending production of the AAFSS (which, finally, was never to occur). Carried over from the 209 were the slim fuselage with tandem cockpits (gunner in front of pilot), the Lycoming T-53 engine, stub wings with store stations and the under nose turret. Its retractable skid landing gear was replaced by a fixed gear. As the AH-1G, the Huey Cobra went into combat in September 1967.

The Marines also operated armed Hueys in Vietnam, and ordered their own version of the Cobra in May 1968. Featuring the Pratt and Whitney Twinpac T400 engine (two 900-hp turboshaft engines coupled together) giving an overall increase in installed power, the AH-1J Sea Cobra included a new nose turret gun, the three barrel XM-197 20mm and other improvements. While development and production of the first 49 ordered were under way, the Marines obtained 38 AH-1Gs from the Army. After initial training of Marines by the Army, Marine Huey Cobras first became operational in April 1969 with VMO-2 in Vietnam. In December 1969, the AH-1Gs were transferred to HML-367. After flight tests beginning that same month and subsequent BIS trials, the first AH-1Js joined them in February 1971, entering combat the following month. AH-1Js, including those of HMA-369, participated in SEAsia operations until final withdrawal and continued as the Marine's attack helicopter afterwards, a total of 67 being delivered. The Marine AH-1Gs became the reserve helicopter attack squadron's aircraft.

With increasing demands for higher performance, particularly greater load-carrying capability in high temperature conditions, Bell developed improved dynamic components for the Huey series. Application of these components, which included a larger diameter rotor, led to the 309 attack helo in the early Seventies. This allowed an increased payload, providing more combat capability. The subsequent Marine-ordered version of the King Cobra was designated the AH-1T. In addition to the modifications for improved combat effectiveness, major efforts were made to incorporate the lessons of the Cobra experience in achieving greater reliability and maintainability. With the TOW missile system added to its weapons, the AH-1T gave Marines a ground attack capability far beyond that first envisioned by their predecessors who took the first Marine Huey Cobras into combat in the late 1960s.

An upgrade to the AT-1T, the AH-1W was received in 1986. The AH-1W Super Cobra provides full night-fighting capability with the Night Targeting System (NTS). The Super Cobra is armed with a 20mm turret gun, TOW, Hellfire, Sidewinder, Sidearm missiles, and 5 inch or 2.75 inch rockets. Future upgraded and modifications for the AH-1W are underway or in the planning stages. 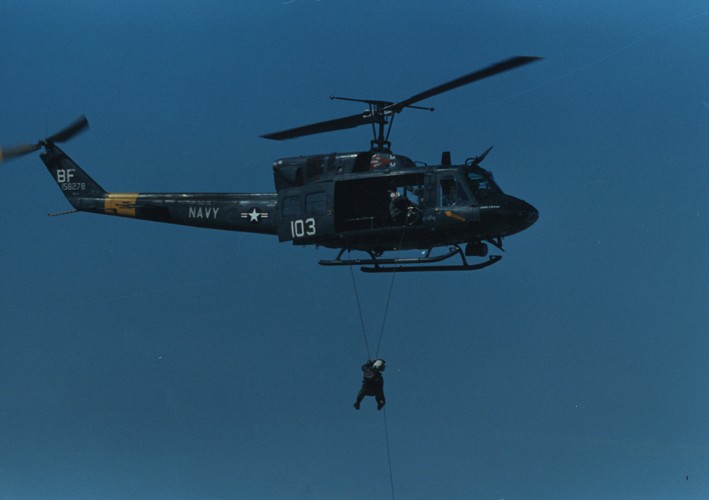 Officially the UH-1 series is the Iroquois. But its unofficial name, Huey, became so commonly used that the AH-1 attack version was officially named the Huey Cobra. The Huey story traces back some four decades. In 1955, with an interest in a utility helicopter designed around a turboshaft engine, the Army had the Air Force develop a new helicopter for its use. At that time the Army did not have its own aircraft development capability.

The design selected, Bell's Model 204, was to be powered by a new Lycoming T-53 engine of some 850 shaft horsepower and featured a typical Bell two-blade teetering rotor. In the original helicopter designation series, the first three aircraft received the XH-40 designation. First flight of the new design was in October 1956, development and production following. When the Army adopted its own two-letter designation system, the H-40 became the HU-1 (Helicopter Utility). From this designation came Huey, the name by which it has remained known. The DOD standard designation system reversed this to UH-1, the first designation in the new DOD helicopter series. With larger engines and increased capacity, the UH was developed through successive models.

In 1962, after an evaluation of available types, the UH-1E version, generally similar to the Army's UH-1B, was ordered for the Marine Corps. These went into service in 1964 with VMO-1 being the first squadron to receive them. Subsequently, 209 UH-1E aircraft were delivered to the Marines by 1968. All, after the first 67, were equipped with an improved rotor system.

Like their Army counterparts, the Marine Hueys served all manner of combat roles, including that of armed gunships. For combat operations in Southeast Asia, a Navy Light Attack Helicopter squadron was also established using UH-1Bs acquired from the Army.

Other models followed for special Navy use: the HH-1Ks equipped for air station search and rescue duty, the TH-1Ls as advanced instrument trainers, and a few of the L models in standard utility configuration as UH-1Ls. The Air Force had meanwhile ordered a "Twin Pac" engine, improved utility version, the UH-1N, for general utility/transport duties. In 1971 deliveries of this latest model to the Navy and Marine Corps began. A total of 212 have been delivered, six in VH-1N executive transport configuration. These UH-1Ns are widely used in a transport, airborne battlefield command and control, troop insertion/extraction, fire support coordination, medical evacuation, search and rescue, armed escort/visual reconnaissance or utility roles throughout the Navy and Marine Corps.