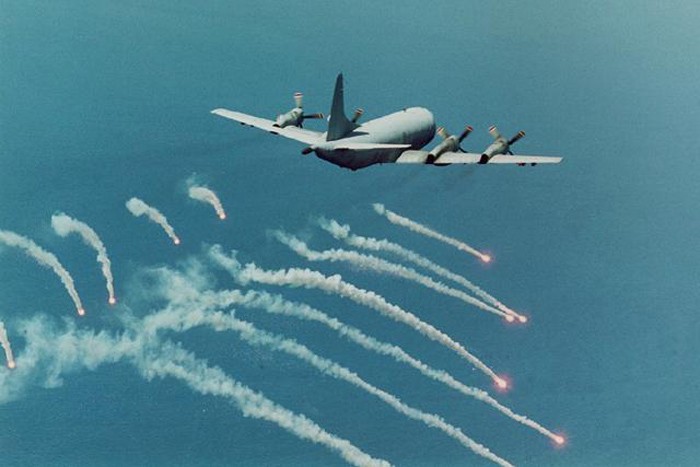 Far from sight of land, skimming over rough seas whose depth and darkness hide a possibly hostile submarine, ten men concentrate on instrument panels, scopes and detection devices as their P-3 Orion flies an ASW search pattern. The P-3 is from a long line of Navy patrol planes. It is powered by four constant-speed turboprop engines, swinging 13 1/2-foot paddle-blade propellers. For sea-level ASW work, two engines may be shut down to achieve increased time on station.

Crew efficiency is increased not only through improved equipment, but also by an improved environment. Instead of the cramped, confined spaces found in earlier patrol planes, the P-3 boasts 250 percent more floor area than the Neptune. It has a pressurized cabin, air conditioning, electrically heated floor panels, and plenty of stand-up and walk-around space. Controllable, polarized lighting reduces eye strain, and comfortable adjustable chairs cut crew fatigue.

Armament available for ASW attacks include torpedoes, depth charges, bombs and rockets, which may be carried in the bomb bay or on underwing pylons. Pilot or TACCO may select and release weapons as the tactical situation requires. Status panels provide a continuous display of the weapons inventory available for use. A similar panel gives a visual reference to the search store's status.

No matter how well an aircraft does its job, there is always room for improvement. Air Test and Evaluation Squadron One (VX-1), NAS Patuxent River, Md., conducted operational test and evaluation of the P-3C Update III weapons prototype aircraft system to determine the operational suitability and effectiveness of the antisubmarine warfare avionics package for service use.

The IBM Proteus acoustic processing system is featured on the Update III. The previously employed directional frequency analysis and recording (DIFAR) system allowed sonobuoy reception on only 31 separate radio frequencies. Proteus employs up to 99 different radio frequencies. Each receiver channel is tunable to all of the frequencies, so that the loss of one receiver channel does not result in the loss of that particular sonobuoy's information.

Four major elements have been incorporated into the Update III. A single advanced signal processor (SASP) processes the acoustic signals for display to the acoustic operator and determine whether such sounds are produced by random ocean noises or submarines. Two video screens enable crew members to study a graphic representation of acoustic signals transmitted by many sonobuoys simultaneously. The SASP utilizes three programs internally as well as interfacing with the aircraft's CP-901 computer for tactical data transfer.

The adaptive controlled phased array (ACPA) is a sonobuoy antenna system which consists of four antennas arranged in a diamond formation on the belly of the aircraft. This system is controlled by the tactical coordinator via keyset entries to the P-3's CP-901 computer. The ACPA, which boasts increased VHF reception range, rejects undesired electromagnetic signals.

Acting as the sonobuoy receiver system, the advanced sonobuoy communication link (ASCL) extracts acoustic data received from the sonobuoy as it is picked up by the antennas.

A sonobuoy signal testing device, called the acoustic test signal generator (ATSG), broadcasts sonobuoy signals and simulated acoustic data on all 99 radio frequencies to check the system while the aircraft is on the ground. The ATSG's signals are transmitted to the ACPA antennas which in turn route them to the SASP. The device can simulate all passive and active sonobuoy types, including the bathythermograph sonobuoy.

Another new system, although not unique to the Update III aircraft, is the digital magnetic tape system (DMTS). It has been installed in all Update IIs since March 1981 and functions as a program loading device for both SASP and CP-901 program loading, as well as a digital data extraction device for the CP-901.

VX-1's role in the test and evaluation of the new antisubmarine weapons system required that testing be conducted in an operational "real world" environment using fleet aircrews and maintenance personnel. The squadron deployed with the Update III to several operational sites, including the Atlantic Undersea Test and Evaluation Center range, Bahamas; Atlantic Fleet Weapons Training Facility, Roosevelt Roads, P.R.; the operating areas of Jacksonville, Fla., Brunswick, Maine, southern California and the Virginia Capes; and from deployed sites at Sigonella, Sicily, and Keflavik, Iceland.

The P-3C Update III and its antisubmarine avionics improvements were found to be operationally effective and potentially suitable for operational use. Based on the test results, improvements incorporated since operational test and evaluation, and the low risk associated with correcting the deficiencies noted, it has been recommended that provisional acceptance for service use be continued. The first fullscale production deliveries of the P-3C Update III began in the mid-1980s.

Numerous modifications and improvements have been made to the P-3C Update III during the past 10 years. Designed primarily as an anti-submarine warfare platform, the Orion has begun a modernization plan to keep pace with increasing multi-mission requirements: Over-the-Horizon surveillance and targeting, maritime patrol, carrier battle group support, interdiction operations, and littoral warfare. The Anti-Surface Warfare (ASUW) Improvement Program (AIP) will provide an imaging radar, electro-optic sensors, and near real-time connectivity of surveillance/reconnaissance data with battle group and national command decision makers.