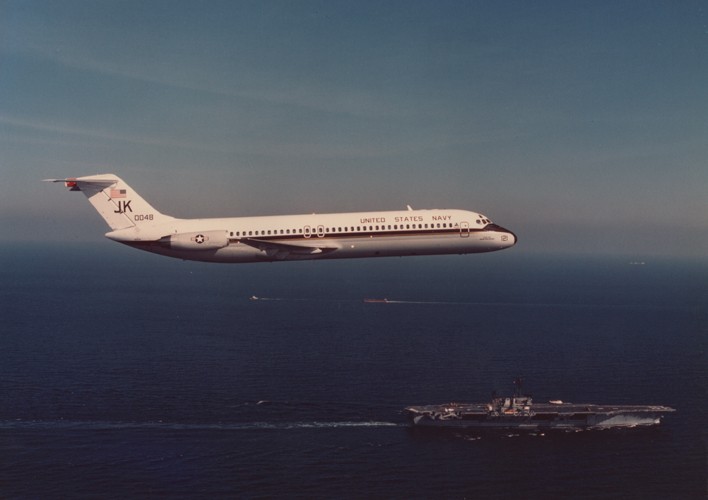 Description: 3-View Drawings for an C-9

Among the Navy's proud possessions are the McDonnell Douglas C-9B Skytrain II transports. These twin jets have brought the Navy into the jet transport age, replacing outmoded piston-engine transports as combined personnel/cargo haulers.

Selected on the basis of a competitive evaluation of available certified twin-jet transports, the C-9B is a convertible passenger/cargo version of the civil series 30 DC-9--a stretched development of the original Douglas DC-9 transport. It is the second military version, the Air Force having previously selected essentially the same model as their C-9A Nightingale aeromedical airlift transport which has been in service for more than five years. Due to the specialized nature of the Air Force operations and the resultant name for its aircraft, a different name was selected for the Navy version--one of the exceptions to normal military aircraft-naming practice in which all versions of the same basic design carry the same name, even though used by different services. The Skytrain II name carries on the traditions of the famed DC-3 of WW II, the original Skytrain.

The prototype DC-9 flew on 25 February 1965, and DC-9s have since become the most widely used twin-jet airline transports. The DC-9 has grown considerably in dimensions-and gross weight--over the four basic model series built to date, with the Navy choosing one of the stretched models.

In common with other convertible passenger/cargo versions, the C-9Bs differ from standard airline aircraft in having a large cargo door on the port side of the forward fuselage, along with other necessary cargo-handling features. All other details are essentially the same as airline models.