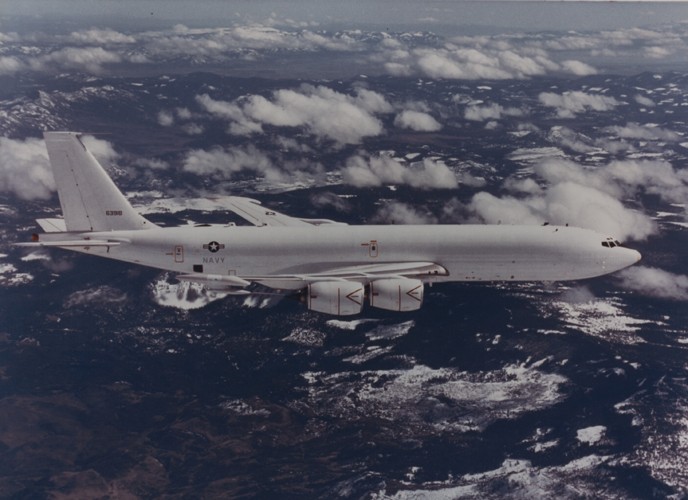 Emphasis in the design and operation of most of today's new Navy aircraft is on multimission capability. One exception, by designation and intended role, might seem to be the Boeing E-6A. Fleet Air Reconnaissance Squadrons (VQs) 3 and 4 operate E-6As in the same manner as their EC-130s - as TACAMO (take charge and move out) communications platforms serving as command links to the fleet ballistic missile submarine force. In spite of their new military designation, the E-6As, like the EC-130s, are part of a large family of transports that have been adapted to many roles. Prototypes of both designs first flew within a month of each other in the summer of 1954.

Following Boeing's prototype four-jet transport, widely publicized as the first of the 707 series, the Air Force ordered the first production models as KC-135 tanker transports. Much modified and adapted, these still serve the Air Force, and two were transferred to the Navy in the late 1970s for use in the electronics support role. Similar in appearance, but considerably redesigned, the first 707-120 airline transports rolled off Boeing's production lines in 1957. By the time these were in service, the larger 707-320 series was following, designed for long range transoceanic service. Both models soon received turbofan engines in place of their original jets. The Navy's E-6A is the final derivative of the 707-320 series to be added to the production line, joining its better known E-3A Sentry AWACS (airborne warning and control system) predecessor.

The first 707-320 series to join the military took on the duties of the presidential aircraft as "Air Force One" in 1962, two joining several earlier 707-120s in the VC-137 series. Ten years later, the two prototypes for what would become the E-3 were also designated in this series. In addition to the large radome mounted on struts above the aft fuselage, similar to that on the prototypes, many detail modifications were made to the 707-320B airframe for the subsequent production E-3As. Particular attention was paid to hardening the airframe against the effect of electromagnetic radiation and nuclear blasts. Updated E-3s serve the Air Force, NATO, and other countries, and are still being produced today.

With the Navy order for TACAMO versions of the 707-320B airframe, the E-6A designation was assigned for these airframes, to be built on the E-3A line. At the same time, C-18 series and E-8A designations were assigned to ex-airline 707-320Bs purchased and modified as test aircraft, both for airborne range instrumentation duties and the JSTARS (joint surveillance target attack radar) program. The former, as EC-18Bs, feature a bulbous nose radome, while the latter carry an elongated under-fuselage radome for a multimode side-looking radar.

The E-6A had its beginnings in studies at the Naval Air Development Center, Warminster, Pa., looking for an expanded capability airframe for the TACAMO role. Among several turbofan-powered jet transports, the basic Boeing 707-320B was particularly attractive because of the availability of the hardened E-3A airframe in production. Higher bypass ratio, more fuel efficient GE-SNECMA CFM 56 engines were being retrofitted to various first-generation, four-jet commercial transports and would enhance the performance of a TACAMO version. Space and weight-carrying capability would accommodate the various communications systems of the EC-130 TACAMO aircraft, including the long trailing very low frequency antenna and its extension/retraction system.

Based on the study results, the TACAMO replacement program got under way; the first two of a planned buy of 16 were ordered in 1984. Unusual was the concept that major components of the communications systems in squadron EC-130s would be removed and reinstalled in the E-6As as they were completed. Many features of the E-3 airframe were retained, including the in-flight refueling receptacle for the flying boom refueling system located at the top of the fuselage aft of the cockpit. A forward cargo door, as on commercial air freight transports, was installed for purposes of transporting major spare components to remote sites.

Provisions for the two trailing wire antennas, one extending from under the mid-fuselage and the other from the tail cone, are among the obvious changes. Enlarged wing tip pods for special electronic equipment are also fitted. Not obvious are the structural changes required to carry the heavy communications systems in the aft fuselage and the increased level of electromagnetic pulse and nuclear blast hardening over that already incorporated in the E-3s.

The first E-6A rolled out in December 1986 and made its first flight in February 1987. After initial flights at Seattle, Wash., it was ferried to the Naval Air Test Center, Patuxent River, Md., for further systems development testing. Crew training using contractor-owned commercial 707-320s began for squadron personnel with no standdown required for squadron transition - a necessity to maintain the strategic communications links. Operational test and evaluation was undertaken by VX-1. Initial deliveries to VQ-3 took place in August 1989.

The new flight profiles and structural characteristics that the E-6A introduced to the 707-320 airframe did result in some unanticipated development challenges. Their resolution will provide the necessary survivable strategic command link to the submarine-launched leg of the strategic nuclear triad well into the future. Besides the command link to the ballistic missile submarines, the E-6A TACAMO aircraft is involved in a joint mission, to provide the vital communication link from the National Command Authority (NCA) to all strategic forces. By 1998, after completion of extensive modifications, it will also provide an Airborne Command Post for United States Command in Chief for Strategic Forces (USINCSTRAT) and theater CINCs.