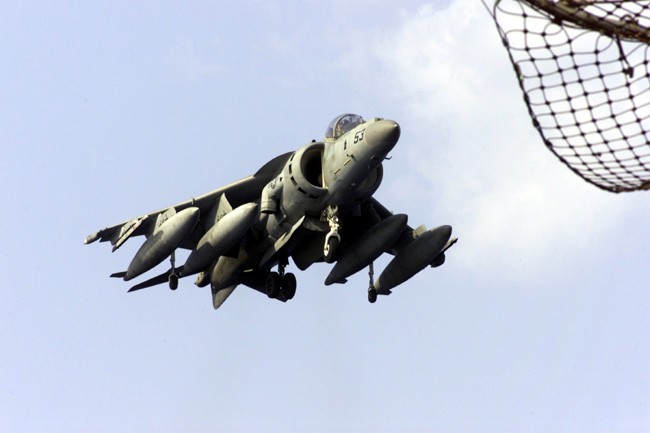 The Harrier today is one of the truly unique and most widely known of military aircraft. It is unique as the only fixed wing V/STOL aircraft in the free world. It also is unusual in the international nature of its development, which brought the design from the first British P.1127 prototype to the AV-8B Harrier II of today.

When the Harrier II was first flown in the fall of 1981, 21 years had elapsed since the original Hawker P.1127 first hovered in untethered flight. This basic design, only one of many promising concepts of the time, has weathered its growing up period and reached maturity in the AV-8B.

The 1957 design for the P.1127 was based on a French engine concept, adopted and improved upon by the British. The project was funded by the British Bristol Engine Co. and by the U.S. Government through the Mutual Weapons Development Program.

With the basic configuration of the engine largely determined and with development work under way, Hawker Aircraft Ltd. engineers directed their attention to designing a V/STOL aircraft that would use the engine. Without government/military customer support, they produced a single-engine attack-reconnaissance design that was as simple a V/STOL aircraft as could be devised. Other than the engine's swivelling nozzles, the reaction control system was the only complication in the effort to provide V/STOL capability.

The initial P.1127 was rolled out in the summer of 1960, by which time RAF interest in the aircraft had finally resulted in funding by the British Government for the two prototypes. First hovers in the fall were made with a severely stripped airplane. This was due to the fact that the first Pegasus engines were cleared for flight at just over 11,000 pounds thrust.

With potential NATO and other foreign interest in the P.1127, four additional airplanes were ordered to continue development.

As the project proceeded into the early sixties international interest in V/STOL tactical aircraft led to an agreement to conduct a tripartite operation, with the United Kingdom, West Germany and the United States sharing equally in development and evaluation. Nine P.1127s were ordered and designated Kestrel F.G.A. 1s in the RAF name system. A number of major configuration changes were incorporated in it although the basic concept remained unchanged. Within the United States it was a tri-service venture (Army, Navy, Air Force) with the Army functioning as the lead service. However, the final interservice agreement later transferred responsibility for this category of aircraft to the Air Force.

Following completion of the operational evaluation in the United Kingdom, six of the Kestrels were shipped to the United States in 1966, designated XV-6As. Here they underwent national trials, including shipboard tests. Two subsequently served in a research role with NASA.

While the Kestrel operation trials were being completed and the six aircraft were headed for the United States, the RAF ordered an updated version, the P.1127 (RAF), subsequently given the designation Harrier GR 1. Retaining its basic concept, Hawker-Siddley extensively redesigned the P.1127 for production.

Before it entered RAF service, the U.S. Marine Corps evinced a major interest in the Harrier for attack missions, and procurement of Marine AV-8As was initiated. The Harrier entered service with the RAF and the U.S. Marines in the early seventies. It was followed in both services by a limited number of two-place trainer versions, designated TAV-8As for the Marines.

Both Hawker-Siddley in the United Kingdom and McDonnell Douglas Aircraft in the United States who had become the American associate contractor, could see ways to improve the Harrier. In 1973, a joint advanced Harrier program was undertaken but the costs of both airplane and Rolls-Royce engine development led to abandonment of the proposed AV-16A advanced Harrier.

Building on the technical accomplishments of the joint program, McDonnell evolved a revised design configuration, incorporating a composite structure wing, which promised most of the AV-16's capabilities without a new Pegasus development. Following full-scale wind-tunnel tests and flight and structural test confirmation with two YAV-8B prototypes, the AV-8B is now in full scale production as the Harrier II. The first AV-8B squadron stood up in 1985.

Upgrading of the AV-8A with some of the systems improvements of the AV-8B resulted in the AV-8C configuration. Two test aircraft were reconfigured for evaluation and a limited AV-8C conversion program was undertaken.

An ongoing remanufacture program for selected Harriers in the inventory will provide new engines and radar, a Forward Looking Infrared Radar (FLIR), moving map and night vision goggles. These improvements will give the Harrier a day and night attack capability, and will extend the service life into the next century as well as greatly improving warfighting capability.