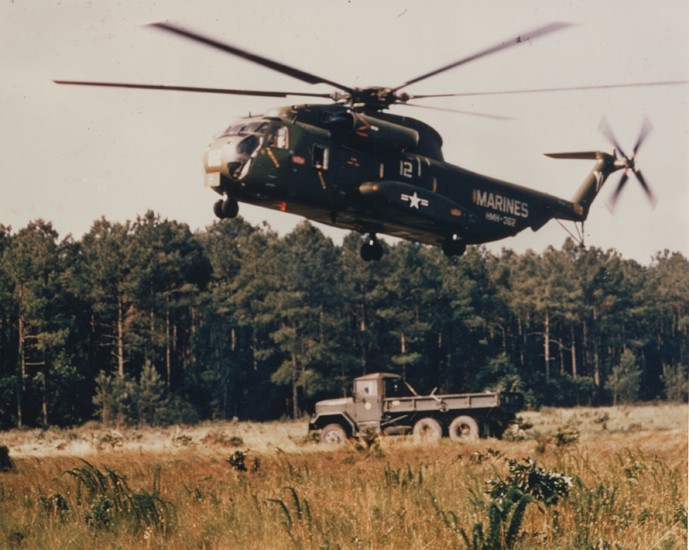 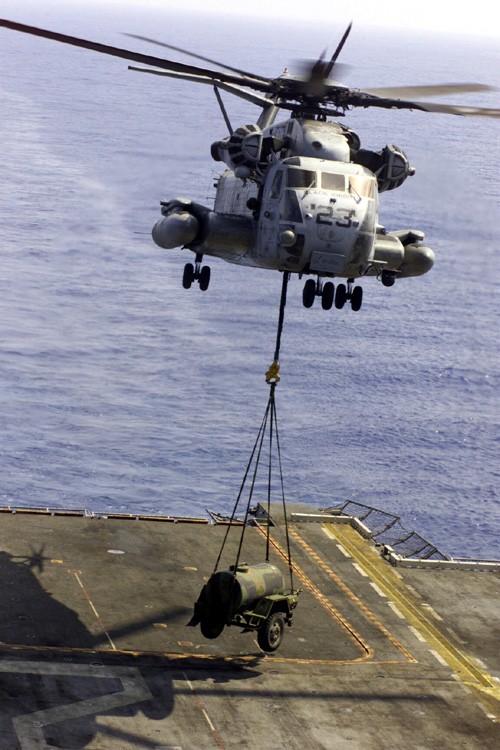 Description: 3-View Drawing of a CH-53E

In recent years, one of the major thrusts in the helicopter industry has been to produce more aesthetically pleasing designs. One exception to this has been the CH-53 Sea Stallion which, in its new CH-53E Super Stallion model and the MH-53E mine countermeasures version, has regressed significantly with various appurtenances and surfaces at different odd angles.

However, beauty is in the eye of the beholder, and the Marine combat officer who needs to move a 16-ton external load over rugged terrain to achieve his objective would find the newest Marine helicopter, hovering overhead as it picks up the load, beautiful!

The CH-53E is an obvious derivative from its CH-53 series forebears. However, the major changes necessary to provide the largest lift capability in the free world have resulted in its being given a new company model number, S-80 in lieu of S-65, for non-U.S. military sales. In many ways, like Topsy, it just grew from the earlier models. Recognizing the need for increased lift capability but not to the extent considered necessary by the Army in its HLH (heavy lift helicopter) program, the Marines, the Naval Air Systems Command and Sikorsky combined forces to develop the CH-53 from a 10-ton to a 16-plus-ton lifter.

Starting off with two concepts, a third engine and a seventh main rotor blade (all with increased diameter), a ground test rig was first built in the early 1970s. Two YCH-53E prototypes followed successful completion of these tests, the first making its initial hovering and limited maneuvering flight on 1 March 1974.

In addition to the engine and rotor changes and generally increased size, the most obvious change was in the tail configuration: a low-mounted symmetrical horizontal tail was surmounted by a larger vertical tail and tail rotor tilted from the vertical so that the tail rotor provided some lift in hover while counteracting the main rotor torque.

Not as obvious were the many internal improvements, particularly a new automatic flight control system. By August 1974, the first YCH-53E had shown that it could lift 17.8 tons to a 50-foot wheel height and, without an external load, could reach 170 knots at a 56,000-pound gross weight.

The capabilities demonstrated were such that, in spite of a number of setbacks in the subsequent development test program, NPEs and other milestones were achieved, and the first two preproduction aircraft and a static test article were ordered, the first flying in December 1975. By this time, the tail had been redesigned to include a single, high-mounted, strut-braced horizontal surface opposite the rotor on the 20-degree canted vertical surface, the inboard section being perpendicular to the vertical with a bend to horizontal at the strut juncture.

By the spring of 1977 testing, including shipboard trials on Iwo Jima, was well along and full production was subsequently ordered. The Dual Digital Automatic Flight Control System had proven its worth--technologically one of the newest systems in the Super Stallion and one that gives it exceptionally good flying qualities in all flight modes.

The first production aircraft flew in December 1980, being delivered to Marine squadron HMH-464 in mid-1981. Further Marine deliveries have continued and Navy squadron HM-12 took delivery of its first Navy CH-53E in November 1982 for vertical onboard delivery (VOD) operations. Modification of the first Navy production CH-53E to the MH-53E configuration led to the MH version being the Navy's principal mine countermeasures helicopter beginning in 1986. Its capability to lift (including retrieval of all Marine and most Navy carrier tactical aircraft, as well as itself), to transport heavy internal loads at reasonable speeds for extended ranges, and to tow MCM gear for long durations, makes the Super Stallion a mainstay of Naval Aviation for many years to come. 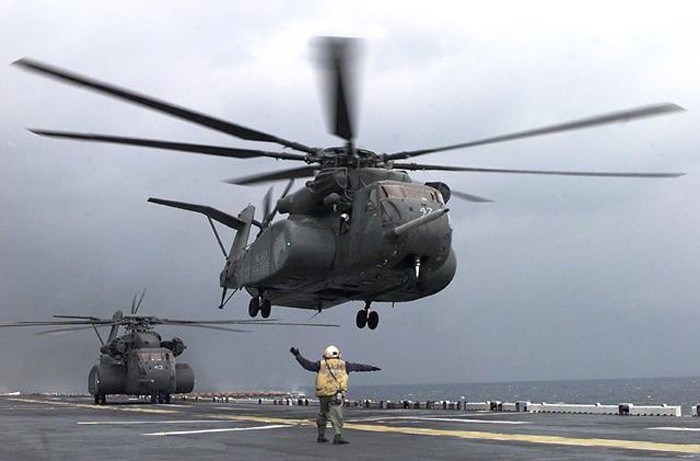 MH-53E
Developed by Sikorsky, the MH-53E is a reconfigured version of the CH-53E Super Stallion presently being used by the Marine Corps. The prototype, MH-53E, made its first flight on 23 December 1981. It underwent evaluation and testing at the Naval Coastal Systems Center in Panama City, Fla.
The MH-53E's triple turbine engines provide greater lift for mine countermeasures operations while enlarged sponsons carry additional fuel to allow up to six hours of time on station. The new configuration also features the airborne mine countermeasures coupled, dual digital automatic flight control system. The system consists of two digital computers, a cockpit control box, six accelerometers, and five position sensors. It is 42 percent lighter, occupies 54 percent less volume and consumes 41 percent less power than the older analog system. There is no organizational level maintenance required. The computers continually cross-check one another and disable any potential false inputs to the automatic flight control system servos. If one computer fails, the other will automatically double its output, eliminating any degradation in automatic flight control performance.
Also part of the new mine countermeasures capability is a dedicated AMCM hydraulic system, improved AMCM navigation, 30,000-pound tension tow boom, better mirrors and better crew environment.
The MH-53E Super Stallion is capable of inflight refueling and can be refueled at hover. It is also shipboard compatible with amphibious ships serving as airborne mine countermeasures platforms. The aircraft will sweep waterways for mines by flying above the surface, towing electronic or magnetic sweeping gear as well as gear for neutralizing moored mines.
Both the CH-53E and MH-53E are involved in development and modernization programs. They will continue to provide a myriad of support functions for the fleet in the area of heavy and medium lift requirements.

Description: Drawing of an MH-53E