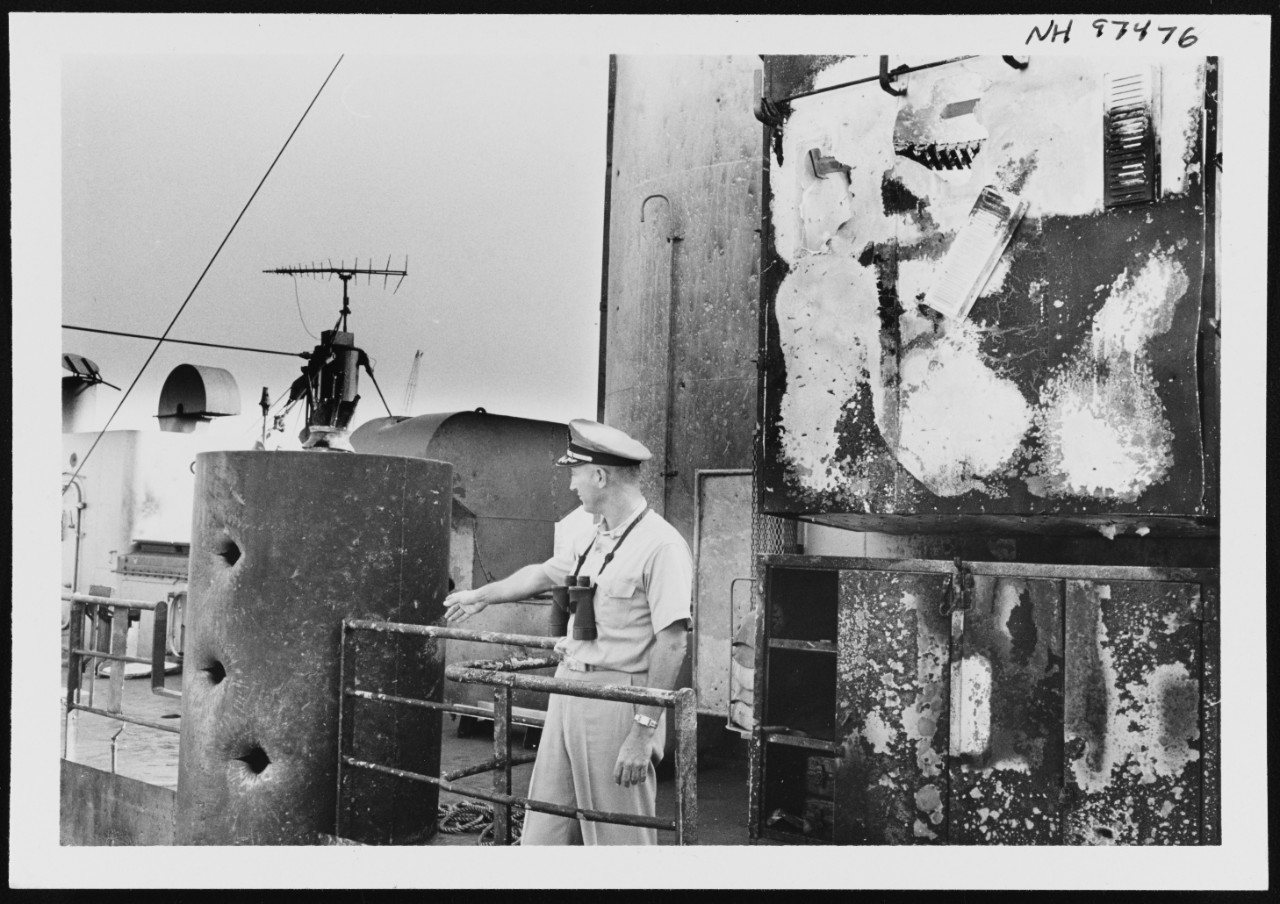 Description: Points out damage inflicted on the ship's superstructure when Israeli forces attacked the Liberty off the Sinai Peninsula on 8 June 1967. The photograph was taken on 16 June, two days after Liberty arrived at Valletta, Malta, for repairs. Official U.S. Navy Photograph, from the collections of the Naval History and Heritage Command.
Related Content

"For conspicuous gallantry and intrepidity at the risk of his life above and beyond the call of duty as Commanding Officer, USS Liberty (AGTR-5) in the Eastern Mediterranean on 8-9 June 1967. Sailing in international waters, the Liberty was attacked without warning by jet fighter aircraft and motor torpedo boats which inflicted many casualties among the crew and caused extreme damage to the ship. Although severely wounded during the first air attack, Captain (then Commander) McGonagle remained at his battle station on the badly damaged bridge and, with full knowledge of the seriousness of his wounds, subordinated his own welfare to the safety and survival of his command. Steadfastly refusing any treatment which would take him away from his post, he calmly continued to exercise firm command of his ship. Despite continuous exposure to fire, he maneuvered his ship, directed its defense, supervised the control of flooding and fire, and saw to the care of the casualties. Captain McGonagle's extraordinary valor under these conditions inspired the surviving members of the Liberty's crew, many of them seriously wounded, to heroic efforts to overcome the battle damage and keep the ship afloat. Subsequent to the attack, although in great pain and weak from the loss of blood, Captain McGonagle remained at his battle station and continued to conn his ship for more than seventeen hours. It was only after rendezvous with a United States destroyer that he relinquished personal control of the Liberty and permitted himself to be removed from the bridge. Even then, he refused much needed medical attention until convinced that the seriously wounded among his crew had been treated. Captain McGonagle's superb professionalism, courageous fighting spirit, and valiant leadership saved his ship and many lives. His actions sustain and enhance the finest traditions of the United States Naval Service."