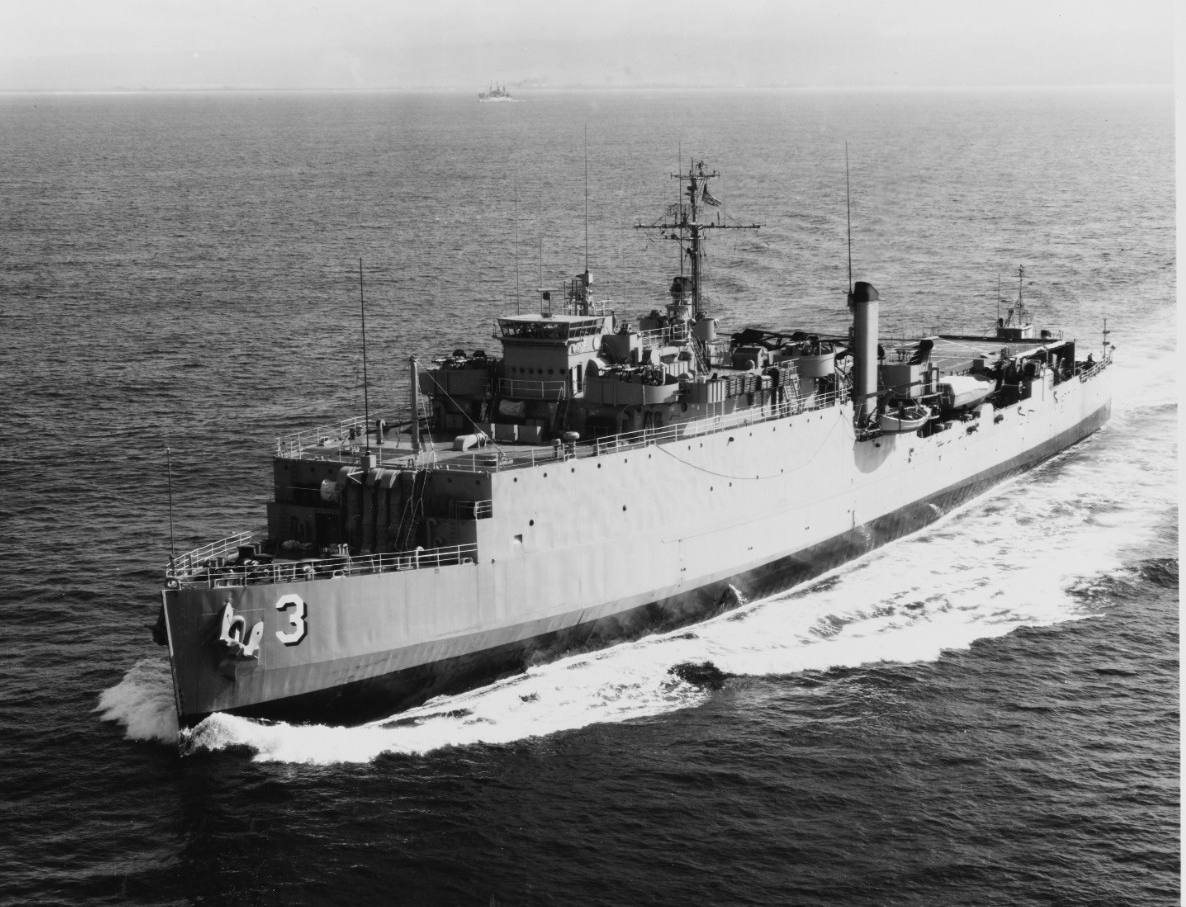 Carter Hall (LSD-3) underway off the coast of Oahu, Hawaii on 11 May 1968. Photographer: PH2 T.F. Sullivan. Official U.S. Navy photograph from the collections of the Naval History and Heritage Command, NH 107619.

Carter Hall, a Virginia estate, was the home of a colonial governor of the state.

Carter Hall sailed from San Francisco 12 October 1943 with cargo and passengers for Brisbane, Australia. She arrived at her next port, Milne Bay, N.G., 26 November to act as receiving ship, tender, and supply ship for small craft there and at Buna until 10 May 1944. During this period, she took part in the invasion landings at Cape Merkus, Arawe, New Britain on 15 December 1943, where valuable experience in the use of newly developed landing craft was gained. Upon the invasion of Aitape and Tanahmerah Bay late in April, Carter Hall once again launched laden landing craft, and stood by the invaded beaches to service small craft, remaining in the area until 2 May 1944.

Carter Hall arrived at Guadalcanal 12 May 1944 for amphibious training, then sailed to Kwajalein to standby in case she should be needed during the invasion of Saipan. Her services not required for that assault, she sailed on to Eniwetok and final preparations for the smashing return to Guam, where she arrived 21 July, day of the initial assault. She remained off the island, supporting the operation through servicing small craft, until 26 July. The dock landing ship returned to Hollandia 29 August, and from 11 September to 1 October supported the operations at Morotai.

Carter Hall sailed from Hollandia 12 October 1944 with the Palo Attack Group of the Northern Attack Force, bound for the landings on Red Beach near Tacloban, San Pedro Bay, P.I. on 20 October. Working efficiently in the apparent chaos that concealed the intricate, smoothly meshed landing plans, Carter Hall's men carried out their key role both in landing their craft and in caring for small craft through 24 October, when she made her retirement as the Battle for Leyte Gulf raged nearby. Her participation in the Leyte operation continued as she carried cargo from New Guinea on a series of runs until 17 November. From then until 30 December, she was stationed in San Pedro Bay as tender and supply ship for landing craft.

Overhauled at Oakland, Calif., between 31 January and 4 April 1945, Carter Hall returned to Subic Bay 1 May to transport small craft, and to take part in the invasions at Brunei Bay, 10 to 16 June, and Balikpapan, 1 to 4 July. She remained at Leyte drydocking small craft until 6 September, when she sailed for Jinsen, Korea, carrying LCM's and picket boats for use in the reoccupation of Korea.

Occupation duty at Shanghai and Sasebo continued until 9 April 1946, when Carter Hall cleared for San Francisco. She was decommissioned and placed in reserve at San Diego 12 February 1947.

Recommisioned 26 January 1951 for duty in the Atlantic Fleet, Carter Hall arrived at her home port, Norfolk, Va., 11 June 1951. Until 7 January 1955, she operated on training, salvage, and fleet exercises, as well as a tour with the 6th Fleet in the Mediterranean from January through May 1953, and a supply lift to Greenland in November 1953.