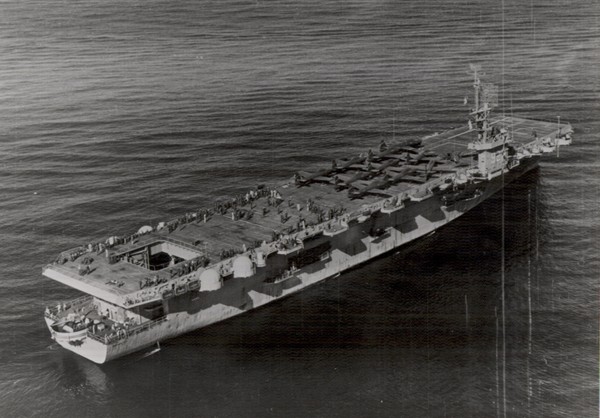 Caption: Three-quarter aerial view of Windham Bay (T-CVU-92), circa 1958, with a deckload of what appears to be Republic F-84 Thunderjets on the flight deck, forward. Note that the ship retains the 5"/38 mount on the centerline at the fantail, and what appears to be a few 20-millimeter mounts; also note the protective "igloos" covering the four 40-millimeter twin Bofors mounts, aft. (National Archives Photograph, 80-G-1046213, National Archives and Records Administration, Still Pictures Branch, College Park, Md.)

A bay on the southeastern coast of Alaska off Frederick Sound.

Following commissioning, Windham Bay, earmarked for transport and training duties exclusively, conducted shakedown training in Puget Sound and then headed for San Diego on 6 June 1944. There, she conducted air qualifications and catapult trials before taking on a load of Hawaii-bound aircraft and passengers. She departed San Diego on 12 June and arrived in Pearl Harbor on the 19th. Trading her cargo of planes and passengers for a similar one bound for the Marshall Islands, Windham Bay stood out of the harbor on 25 June and arrived at Majuro on 2 July. After unloading her aircraft, she moved on to Kwajalein where she loaded planes and men of Marine Night Fighter Squadron (VMFN) 532 and headed for the Marianas. The Marines flew off near Saipan, and Windham Bay put into Garapan anchorage to unload the squadron's gear.

Afterward, the escort carrier took on a load of captured Japanese planes and other material for transportation back to Hawaii. She arrived in Pearl Harbor on 10 July 1944 and remained there for 15 days, getting underway for the west coast on 25 July. The warship arrived in San Diego on 31 July and soon began overhaul at San Pedro.

Repairs took the entire month of August 1944, but she was back at sea on 1 September with a load of aircraft bound for Emirau and Manus. She arrived at Emirau at mid-month and at Manus on the 18th. From there, she voyaged to Espiritu Santo on a passenger run, returning to Manus on 5 October with a load of planes. After a brief visit to Guadalcanal during the second week in October, she got underway for the United States. Windham Bay steamed via Espiritu Santo and arrived in San Diego on 20 October. In November, she made another voyage from the west coast to the South Pacific, carrying aircraft to Manus and embarking about 350 casualties from the Palau campaign at Guadalcanal on 24 November for the return voyage to San Diego.

The escort carrier remained at San Diego from 10 December 1944 until the 27th when she resumed aircraft ferrying operations. She arrived in Pearl Harbor on 2 January 1945, unloaded one cargo of aircraft there and took on another made up of Vought F4U Corsairs. She departed Pearl Harbor on 5 January and arrived at Midway Island on the 9th to unload the Corsairs. Departing Midway the next day, Windham Bay returned to Oahu on the 13th. On 1 February, the ship stood out of Pearl Harbor on her way to the Central Pacific. Carrying replacement aircraft for the fleet carriers of Task Force 58, she made a stop at Eniwetok on her way to the staging base at Ulithi in the Western Carolines.

From there, she operated with the 5th Fleet Logistics Group, Task Group 50.8, in support of the fast carrier strikes conducted during the Iwo Jima and Okinawa operations. During the next four months, assigned to the Carrier Transport Squadron, she visited Guam and the Ryukyus. On 4-5 June 1945, while steaming with the logistics group in support of TF 38 and the strikes on Okinawa, Windham Bay encountered a typhoon. The heavy storm damage included the collapse of 20 feet of flight deck onto the foc'sle, a warped and ruptured catapult, as well as lost and damaged planes. On 16 June, she cleared the Marianas en route to Oahu. The warship reached Pearl Harbor on the 25th but departed again two days later. She entered port at San Diego on 11 July and immediately began repairs to correct the typhoon damage she had suffered earlier in the month. Those repairs lasted through late August so that she missed the final weeks of the war.

On 26 August 1945, she departed San Diego on her way back to the Central Pacific carrying Marine Fighter Squadron (VMF) 312 to Guam. She stopped briefly at Pearl Harbor and arrived in Apra on 15 September. After unloading passengers and cargo, Windham Bay headed for Samar in the Philippines where she arrived on 19 September. There, she loaded passengers, planes, and equipment for transportation back to Hawaii. She got underway from Leyte on 24 September, made a stop at Guam on the 27th, and arrived back at Oahu on 7 October. On the 8th, she continued eastward toward the west coast and arrived at San Diego on the 14th.

Five days later, the ship headed back to Pearl Harbor on her way to participate in Operation Magic Carpet, the return of American servicemen to the United States. After a round-trip voyage to San Pedro, Calif., and back to Pearl Harbor, she set out for the western Pacific once more on 13 November 1945. Arriving at Samar in the Philippines on the 26th, she embarked passengers and then headed east again on the 28th. She stopped at Oahu along the way and arrived in Port Hueneme, Calif., on 17 December. She moved to San Pedro on the 18th and remained there through the New Year.

On 8 January 1946, Windham Bay departed San Pedro, headed for Hawaii, and arrived in Pearl Harbor on 14 January. She departed Oahu again on the 15th and arrived in San Pedro on the 21st. Within days, however, she moved north to Tacoma, Wash., where she reported for duty with the Pacific Reserve Fleet on 25 January 1946. She remained there "in commission, in reserve," designated as the temporary flagship of the Commander, Tacoma Group, 19th Fleet, until 23 August 1946 when she was placed out of commission.

The escort carrier stayed with the Reserve Fleet until hostilities erupted in Korea during the summer of 1950. Designated for activation on 7 August 1950 for assignment to the Military Sea Transportation Service (MSTS), Windham Bay (T-CVE-92) was recommissioned at Bremerton, Wash., on 28 October 1950, Capt. Charles E. Brunton in command. On 20 November, she steamed south to California, visiting San Francisco on the way to San Diego where she arrived on 2 December. After 11 days, the escort carrier returned to San Francisco whence she embarked upon a voyage to Pearl Harbor on the 19th. Returning to the west coast at Alameda on 2 January 1951, the warship headed west again five days later. She arrived in Yokohama, Japan, on the 24th and unloaded a cargo of aircraft. Departing Japan two days later, she visited Saigon, French Indochina (1-3 February) to unload a cargo of Grumman F8F Bearcats for the French, and Sangley Point, Philippine Islands (6-8 February), before shaping a course back to the United States. Windham Bay reentered San Francisco Bay on 24 February.

At this juncture, the escort carrier settled into a routine of transpacific resupply voyages between the United States and Japan. Over the next 20 months, she made nine round-trip voyages, beginning each at either San Francisco or San Diego, stopping always at Yokosuka, and returning always to San Francisco. She broke that nine-voyage routine in October and November 1952 when she visited Takao, Japan, and Bangkok, Thailand, before returning, via Japan, to the west coast at Alameda on 9 December.

Windham Bay continued her aircraft ferrying voyages between the United States and Japan during 1953. The war in Korea, however, began to subside in intensity at about the same time, and her passages began to take on more of a peacetime character. She began making more stops and side trips in addition to Yokosuka, notably to Hawaii, the Philippines, and at other Japanese ports. French Indochina also returned to her itinerary in May of 1954 and again in February and March of 1955 when she made visits to Saigon, capital of the newly constituted Republic of South Vietnam. On 12 June 1955, she was redesignated T-CVU-92. In May 1957, she added Naha, Okinawa, to her list of ports of call; and, in December, she made one more stop at Saigon. Otherwise, the remainder of her career consisted of the normal west coast-to-Japan aircraft resupply voyages in support of the fast carriers assigned to the western Pacific.

Windham Bay's career lasted until the end of 1958. In January 1959, she was decommissioned and berthed with the San Francisco Group, Pacific Reserve Fleet. Her name was stricken from the Navy list on 1 February 1959, and she was ultimately sold to the Hugo Neu Steel Products Corp., of New York City. The ship was scrapped in Japan in February, 1961.