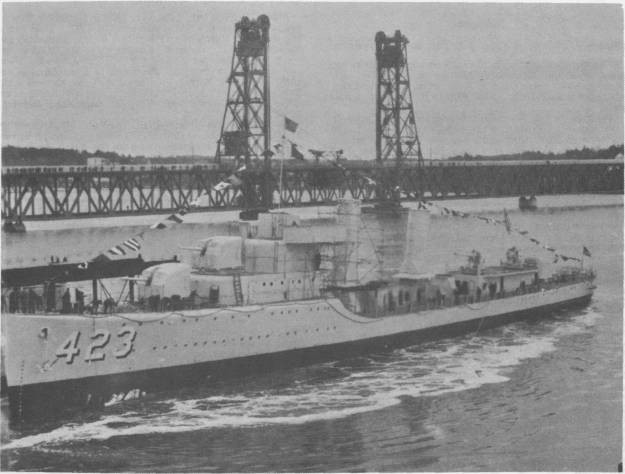 Albert Gleaves, born 1 January 1858 in Nashville, Tenn., graduated from the Naval Academy in 1877. After serving on board Hartford and Trenton, he was appointed an Ensign in 1881. Assigned to many ships and station, he commanded Gushing during the Spanish-American War and later North Dakota. Promoted to Rear Admiral in 1915, in World War I he commanded the Cruiser and Transport Force. For his outstanding contribution he was awarded the Army and Navy Distinguished Service Medals.

In 1919 he was promoted to Admiral. While serving at the Naval Ordnance Proving Ground, Admiral Gleaves made outstanding contributions in the field of gunnery and torpedoes. While carrying out some tests on torpedo steering devices he changed these weapons from instruments of luck into instruments of precision. The gear which he tested in Gushing provided the imprints which made the torpedo the "terrible weapon" of World War I. In spite of a life of constant action in war and peace, he found time to write a biography on Captain Lawrence; the "History of the Cruiser and Transport Force," and the "Life of an American Sailor, William Hensley Emory, Rear Admiral, USN." After a most distinguished career, he retired in 1921. Admiral Gleaves died 6 January 1937 at Haverford, Pa.

Departing for shakedown training soon after commissioning, Gleaves operated off the Atlantic coast and in Caribbean waters until returning to Boston 19 March 1941 to prepare for convoy duty. She departed Newport on her first voyage 23 June 1941, and saw her convoy arrive safely at Iceland. After patrolling in Icelandic waters for a time, she returned to Boston 23 July.

Subsequently, Gleaves made four other convoy voyages to Iceland, Ireland, and North Africa protecting the vital flow of supplies to the European Theater. As the pace of German submarine attacks increased, she made more and more attacks on U-boats, but recorded no confirmed kills. On 11 to 12 May 1942, despite the efforts of Gleaves and the other escort vessels, seven ships of the convoy were lost in two separate attacks by a large wolfpack.

After returning to Boston 31 March 1942, Gleaves departed 10 May for participation in the Allied landings in Sicily. After engaging in support and convoy operations in the battle zone, Gleaves and Plunkett accepted the surrender of the Italian garrison on the island of Utica 5 August 1943, and later landed occupation troops on the island. She also drove off a group of five enemy E-boats attempting to attack shipping in the harbor of Palermo, Sicily.

As Allied preparations for the invasion of Italy reached a climax, Gleaves bombarded the Italian mainland. In September 1943 she helped clear the way for the Alerno landing forces. Following the assault, Gleaves convoyed shipping in the Mediterranean area in support of the drive north from Salerno.

When German air and land forces combined in a determined attempt to stop the landings at Anzio in January 1944, Gleaves was again on hand to lend decisive gunfire support and antiaircraft cover. In May of that year she attempted to search out and destroy German submarine V-616 but other ships of the group sank the U-boat. Survivors from the sunken U-boat were picked up by Gleaves 17 May.

Gleaves next took part in the invasion of southern France in August 1944. She escorted the Rangers in their initial landings; bombarded shore installations in support of the main assault; and screened heavier units of the fleet off shore.

Sent to San Remo on patrol and support duty, Gleaves helped in the bombardment of shore installations there 1 October firing on shipping in the harbor of Oneglio, Italy, with hits on two cargo ships. On the night of 1 to 2 October, Gleaves was attacked and succeeded in destroying one of three small explosives-laden German motor boats moving down the coast to San Remo. The other two were temporarily driven off. Returning to her station off San Remo, Gleaves was attacked two more times before she, by violent maneuvering, depth charges, and well-placed gunfire, left five boats sunk in her wake. The following morning she returned to the area to find a sixth boat disabled; and captured it with two operators on board, who provided the Allies much valuable information.

In December 1944, Gleaves was assigned as fire support ship near Allied positions on the Franco-Italian frontier, and ably performed this duty until sailing for the United States in February 1945. After a period of outfitting at New York and training activities in the Caribbean, she departed 30 June 1945 from Guantanamo Bay, Cuba, for the Pacific, arriving at Pearl Harbor 4 August. After the war's end, Gleaves proceeded westward to Saipan and Nagasaki, Japan, with the occupation forces. She distinguished herself for outstanding rescue and salvage work during the powerful typhoon which swept through the Philippine Sea during September and October.

While repairing her machinery at Adak, Alaska, 23 November, Gleaves received word that steamer Adabelle Lykes in the Pacific was suffering from a smallpox epidemic. The veteran "can do" destroyer put to sea at top speed from Adak on 25 November with the vital vaccine. She met the stricken steamer next day and transferred the life-saving supplies.

Her duty in the North Pacific terminated, Gleaves transported 300 veterans from the Aleutians to Seattle, Wash., on "Magic Carpet" duty, arriving 10 December 1945. She then moved to San Francisco and on 2 January 1946 departed for Charleston, S.C. At Charleston, where she arrived 18 January 1946, Gleaves decommissioned 8 May 1946, and was placed in reserve at Philadelphia, Pa. She was later moved to the Reserve Fleet at Orange, Tex., where she remains in 1967.