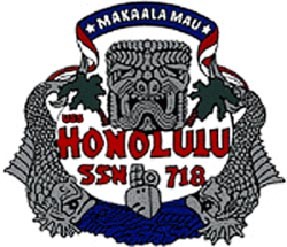 The capital of Hawaii.

Background on Name: The third ship named in honor of the capital city of Honolulu, Hawaii. The first was a cargo ship (1918-1919) that earned a World War I Victory Medal for her service. The second was a light cruiser (CL-48) commissioned on 15 Jun 1938 at New York Navy Yard. Honolulu (CL-48) earned 9 Battle Stars in action at Pearl Harbor, Guadalcanal, Solomon Islands, Tassafaronga, Saipan, Guam, Caroline Islands and Leyte Gulf.

Sponsor: Mrs. Joan B. Clark wife of The Honorable William P. Clark, former Secretary of the Interior and Assistant to the President for National Security Affairs.

Decommissioned: In commission, in reserve 01 November 2006

The central theme of the design is a tiki image of "Kuka'ilimoku," the Hawaiian god of war. During the wars of Hawaiian unification by Kamehameha, the first King of Hawaii (1790-1832), it was believed that Kamehameha took on the power (or "mana") of Kuka'ilimoku during battle. The pennant with the ships' motto "Maka'ala Mau", meaning "Always on the alert," centered in a blue field represents both the commissioning pennant as well as the colors of the national ensign. The diesel boat and dolphins illustrate the submarine's heritage. The palm trees are typical of the Hawaiian Islands and compliment the symbolism of the tiki, as well as add color to the design.


6 Sep 1986: Honolulu transited the Panama Canal and turned south to the Equator for a "Shellback Ceremony." One hundred and eleven Pollywogs are initiated into the "Order of the Deep King Neptune."


21 Sep 1986: Honolulu arrived in Pearl Harbor, Hawaii with much fanfare. She “toured the Waikiki waterfront less than one mile from shore escorted by many small pleasure crafts. Upon entering Pearl Harbor the ship paused for a salute at the Arizona War Memorial before receiving a warm 'Welcome Home' ceremony at the Hotel Pier that included Hula dancers, an escort of outrigger canoes, and a speech by the City of Honolulu Mayor, Frank Fasi.”


12 May 1987: Underway from Pearl Harbor for a western Pacific deployment.


22 May 1987: In port Moen, Truk Island, thus becoming the first warship since World War II to enter that port. Unfortunately, when departing Moen, Honolulu touched aground forcing the ship to Guam for minor rudder repairs.


19 Aug 1987: In port Subic Bay, Republic of the Philippines for liberty. Following her stay in Subic Bay, the submarine sailed to Yokosuka, Japan for a upkeep. With minor repairs complete, Honolulu then sailed for Hong Kong on 8 September.


13 -21 Oct 1987: Honolulu returned to Yokosuka, Japan for her last upkeep prior to heading home.


Nov  Dec 1987: In port Pearl Harbor for holiday stand down and upkeep.


30 May  Jun 1988: Honolulu departed Pearl Harbor to begin at sea testing of new sonar systems and to participate in RIMPAC 88, a multi-national fleet exercise involving forces from Japan, Canada, Australia, and the United States. Following RIMPAC, Honolulu enjoyed a liberty call in San Diego over the Fourth of July weekend.


Jul  Aug 1988: On the return voyage to Pearl Harbor, Honolulu completed an unscheduled ORSE. Following a two week upkeep, the boat returned to sea to participate in PCO OPS with Louisville (SSN 721). This rigorous at sea period took Honolulu to the Barking Sands range off Kauai, ending in a three day liberty stop at Lahaina, Maui and dependents cruise back to Pearl Harbor.


Sep - Dec 1988: Honolulu spent the month of September in upkeep before participating in PACSUBASWEX 89-1 (17-21 Oct) and conducting systems testing required for deployment.


24 Feb  9 Mar 1989: In port Subic Bay, Philippines for upkeep and liberty. “The crew enjoyed the sights and sounds the friendly population had to offer and several crewmembers assisted in a COMSEVENTHFLT public affairs office request to help paint a local village school.”


Mar  Apr 1989: Honolulu sailed to Hong Kong and moored alongside the fleet ocean tug Sioux (T-ATF-171). The crew enjoyed five days of liberty in the city. “Many took advantage of the China Fleet Club’s exchange and did some serious shopping for everything from oriental rugs to fine china to tailor made clothing. Everyone agreed that this was the best stop of the entire deployment.” Following the port visit, Honolulu embarked on a month long operation.


30 Apr  4 May 1989: In port Chinhae, South Korea for a rigorous upkeep alongside the submarine tender Proteus (AS 19). “Crew members took advantage of the few off hours they had to explore the areas around Chinhae and Pusan, enjoying the local color and flavor.”


14 Jun 1989: Honolulu completed another operation and sailed to Guam for a post- operation upkeep alongside Proteus.


Jul  Aug 1989: After post-deployment stand down, Honolulu prepared for the Naval Technical Proficiency Inspection (NTPI). The ship completed the NTPI and received orders to deploy to the North Pacific.


Nov  Dec 1989: Honolulu spent the remainder of the year alternating in port upkeep and at sea services for various surface ships. The ship entered dry dock on 1 December.


Jan  Apr 1990: Underway for local research and development operations. Completed TRE in February and returned to port for upkeep in March and April.


28 May 1990: Underway from Pearl Harbor for north Pacific operations.


Dec 1990: Honolulu completed sea trials and a shakedown cruise prior to returning to Pearl Harbor for holiday stand down.


Jan  Mar 1991: Honolulu spent the first quarter primarily at sea for PCO OPS, TRE and Tactical Weapons Proficiency. She returned to Pearl Harbor for her final POM upkeep prior to deployment.


23 May 1991: Underway from Pearl Harbor for western Pacific deployment.


Dec 1991: Following stand down, Honolulu conducted a dependents cruise from Oahu to Kona. The crew enjoyed holiday stand down for the rest of the month.


Jan  Mar 1995: Honolulu spent the month of January underway for local operations, a VIP cruise (13 Jan) and a dependents cruise (14-17 Jan). Upon her return she completed a short upkeep.


Apr  Jun 1995: In April Honolulu participated in ENCOUNTEREX with the Abraham Lincoln (CVN-72) battle group (17-25 Apr). She completed TRE work up and inspection for much of May (3-19 May). From 20 May to 5 July Honolulu completed her final POM upkeep prior to deployment.


Feb  Mar 1996: Honolulu completed a short upkeep in March after enjoying some post deployment stand down.


Apr  Jun 1996: Starting in April, Honolulu spent several weeks underway providing TRE support for submarines Tautog (SSN-639), Pasadena (SSN-752) and Henry M. Jackson (SSBN-730). Honolulu enjoyed a dependents cruise to Maui (10-14 May) and a VIP cruise (15 May) prior to participating in RIMPAC ’96. From May through June Honolulu participated with the Independence (CV 62) battle group in RIMPAC ’96 providing valuable training for all ships involved.


Feb 1997: Honolulu completed POMCERT (9-13 Feb) before enjoying some pre deployment stand down. During this time she also hosted photographer Brian Wolfe who took numerous photos for his book “From the Sea.”


Mar  Aug 1997: Honolulu completed a successful deployment conducting operations vital to national security. She also participated in Exercise SEA EAGLE ’97, an operation with the Royal Thai Navy and P-3 patrol craft. Honolulu enjoyed several port visits including Okinawa, Japan on 3 May. Honolulu visited Pattaya Beach, Thailand from 12-17 May where she, along with sailors from USS Curts (FFG-38), Independence (CV-62), and Curtis Wilbur (DDG-54) made structural, electrical and esthetic repairs to a school for homeless children. While in Sasebo, Japan (24 May-3 Jun and 6 Jul), Honolulu hosted several dignitaries including Rear Admiral Kazunari Doke, Chief of Staff for the Japan Maritime Self Defense Force Sasebo District; Mr. Hideyake Miyajima, General Manager of Holiday Inn Sasebo and Mr. Yutaka Kawachi, a senior official from Shinwa Bank. While in Guam (29 Jul-6 Aug), Honolulu assisted in the effort to rescue victims of the Korean Airlines Flight 801 plane crash and she completed a maintenance availability.


Apr  Jun 1998: Honolulu provided TRE and TWP support for various ships (15-27 Apr) prior to successfully completing her TWP (28-30 Apr). Honolulu completed a surprise ORSE from May 5-6. She then held a dependent’s cruise in Lahaina, Maui (9-11 May) before returning to Pearl Harbor to enter dry dock. On 4 Jun Honolulu entered dry dock at Pearl Harbor Naval Shipyard.


Jul  Sep 1998: Honolulu left the dry dock on 9 Jul and completed Sea Trials on 28-30 Jul. She participated in PCO OPS (2-15 Aug) before enjoying a port visit to Kona, HI (21-24 Aug). Honolulu spent the month of September preparing for the upcoming deployment.


Oct  Dec 1998: Honolulu spent much of the time at sea preparing for her TRE and POMCERT. She completed both inspections on 14-18 Dec. On 22 October, CDR Haney received the VADM Stockdale Leadership Award in Washington, D.C.


Dec 1999: Honolulu spent the month preparing for Mine Certification and enjoyed holiday stand down.


13 May 2006: Underway from Pearl Harbor for final western Pacific deployment.


1 Nov 2006: Honolulu returns to Puget Sound Naval Shipyard for inactivation, decommissioning and recycling. In an unusual decision to actually recycle part of the submarine, the shipyard planned to transplant the bow of retiring Honolulu onto submarine San Francisco (SSN-711), which had been severely damaged after it ran into an underwater sea mount off Guam in 2005.