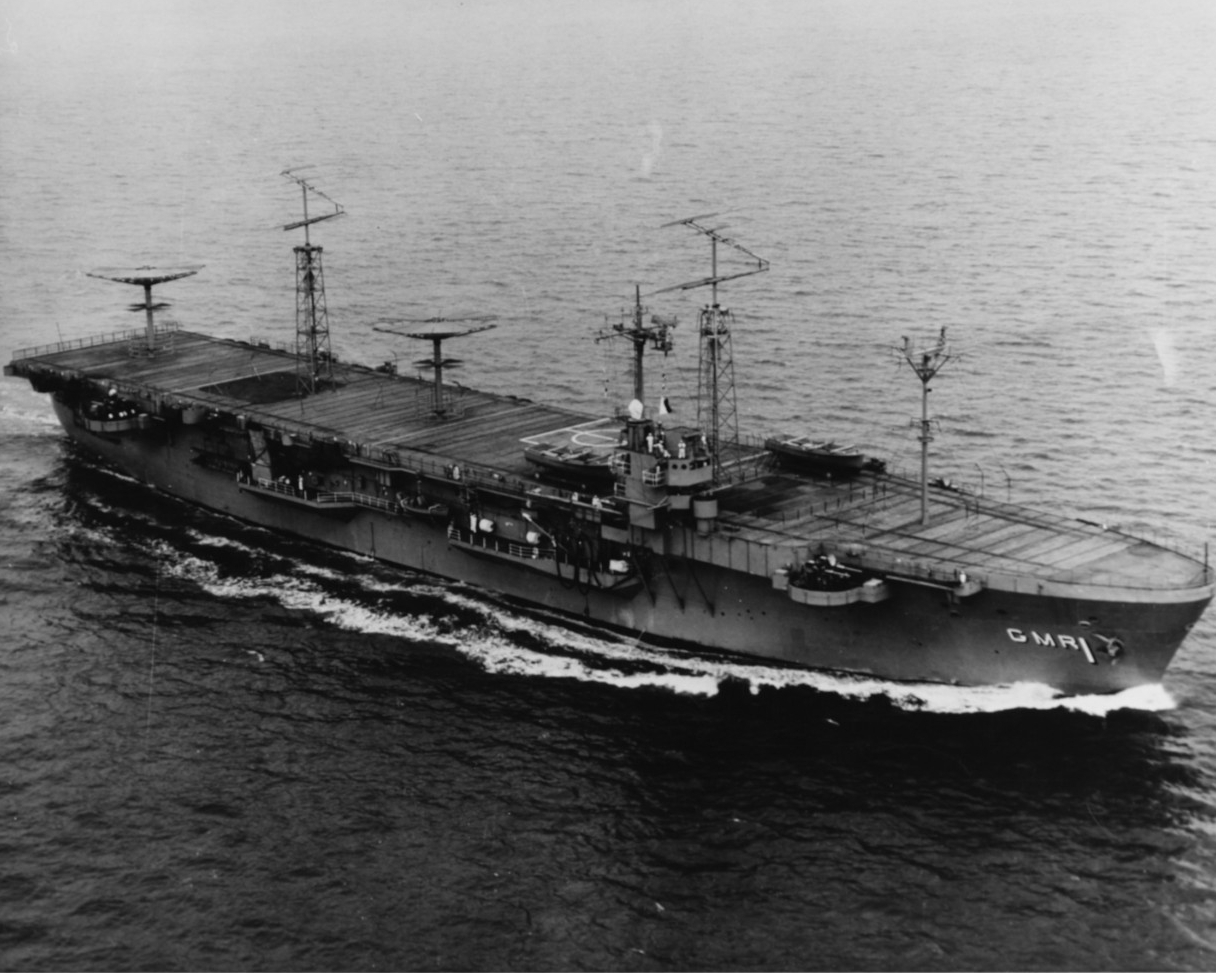 The third U.S. Navy ship named for the capital city of the state of Maryland and the location of the U.S. Naval Academy.

After fitting out, Gilbert Islands departed Puget Sound and, after passing through the Straits of Juan de Fuca, headed south for California, on 20 February 1945. The next day a patrolling blimp reported a hazard to navigation and requested the escort carrier destroy the floating mine with gunfire. As the ship's war diarist noted, the crew received "some badly needed gunnery practice," as it took 431 rounds of 40 millimeter and 417 rounds of 20 millimeter ammunition to finally destroy the mine.

After the short but intense workup period, the escort carrier sailed for the Caroline Islands on 2 May 1945, arriving at Ulithi on the 14th. The voyage was marked by repeated submarine contacts reported by her escorts Caperton (DD-650), Cogswell (DD-651) and Ingersoll (DD-652), all of which were later evaluated as "doubtful." That remark in the war diary was followed by the melancholy phrase "This war was tough for whales." Three days later the escort carrier steamed for the Ryukyu Islands, joining Task Unit (TU) 52.1.1 off Okinawa on 21 May.

For the first three days on station, the escort carrier provided local combat air patrol and anti-submarine (ASW) patrols for the task unit. Once the pilots got some combat flying experience the missions broadened, and MAG Two began flying escort and strike missions against fortified Japanese positions around Shuri Castle in southern Okinawa. During these operations, a fighter piloted by Capt. Thomas Liggett, Jr., USMC, shot down a twin-engine Mitsubishi Ki. 46 Dinah reconaissance plane, which turned out to be the only air victory for MAG Two and Gilbert Islands during the war. Attacks against concrete dugouts, trench lines and supply dumps lasted until the end of May, with one pilot lost on the 23rd when his F4U dipped too low during a turn and splashed into the sea.

Shifting to TU 32.1.3 on 1 June 1945, Gilbert Islands aircraft then heavily bombed and strafed airfields on ths Sakishima Gunto group for over two weeks, repeatedly striking installations on Ishigaki Shima, Erabu Shima and Miyako Shima with bombs and rockets. Radio and radar stations were also destroyed, with barracks, port facilities and villages repeatedly bombed and strafed. The intense air activity did not come without cost, with four planes, two fighters and two bombers, lost in combat. Two aircraft, a fighter and a bomber, ditched at sea following battle damage with the loss of one radioman. Two other aircraft were shot down over their targets, with the loss of two pilots, a radioman and a gunner.

After retiring to San Pedro Bay, Leyte, on 16 June 1945 for "rest, recreation and repairs," the crew of the escort carrier spent five hectic days receiving fuel, bombs rockets and other ammunition, general stores and provisions in between badly needed maintenance work. Then, just as the crew was getting around to the "rest and recreation" part, the warship was ordered south to the Dutch East Indies. Underway 26 June, Gilbert Islands joined Task Group (TG) 78.4, comprising two other escort carriers, Suwanee (CVE-27) and Block Island (CVE-106), and six escorts and steamed south to Borneo, via the Philippine Sea, Celebes Sea and Makassar Strait. Starting on 30 June, Marine pilots began bombing and strafing Japanese buildings, troops and vehicles in and around Balikpapan in support of Australian landings there. One plane was lost during these strikes, when an F6F Hellcat flew into a flurry of anti-aircraft fire during a low-level strafing run, killing the pilot. With the beachhead securely established by 4 July, the escort carrier turned north for Leyte. During the two day voyage back to San Pedro Bay the warship crossed the equator and was deemed far enough away from "any Japanese held bases to indulge in some relaxation." Unfortunately for some, the war diarist noted, "King Neptune and all of his Shellbacks exerted themselves so vigorously that the Pollywogs were not able to relax for several days."

Gilbert Islands finally received some rest and recreation at Leyte, spending most of the month there, before getting underway 29 July 1945 to screen logistic ships replenishing Third Fleet striking forces along the coast of Japan. This duty included helping escorts shepherd eight oilers and tugs away from a typhoon between 10-12 August. On that station 15 August she joined TG 30.8, which included nearly all of the Third Fleet, and heard Adm. William F. Halsey, Jr.'s laconic direction "Apparently the war is over and you are ordered to cease firing; so, if you see any Jap planes in the air, you will just have to shoot them down in a friendly manner." They later heard his formal speech regarding the armistice where Adm. Halsey began by declaring "a barbarous and treacherous foe has been brought to its knees in abject submission," and, as declared by the war diarist, the Admiral only then "gradually warmed up to his subject."

Detached from TG 30.8 on 2 September 1945, the escort carrier remained at Okinawa for almost six weeks before sailing south to Formosa, where she covered the landing of the Chinese Nationalist 70th Army at Kiirun. She was then routed onward via Saipan (to embark passengers) and Pearl Harbor to San Diego, arriving 4 December 1945. She remained in port until 21 January 1946, then set course for Norfolk where, after arrival on 7 February 1946, Gilbert Islands decommissioned 21 May 1946 and was placed in reserve. The mothballed escort carrier was later towed to the Inactive Ship Facility at Philadelphia in November 1949.

Following the outbreak of the Korean War in the summer of 1950, many mothballed warships were recalled to service, including Gilbert Islands which recommissioned at Philadelphia on 7 September 1951, Capt. Carl E. Giese in command. After a six month overahaul at Boston Naval Shipyard starting on 25 November, the escort carrier joined the Atlantic Fleet on 1 August 1952. The warship sailed eight days later with a cargo of jets for Yokohama, Japan, arriving 18 September, and returned to her new homeport of Quonset Point, R.I., on 22 October. Gilbert Islands got underway 5 January 1953 for a short training cruise to the West Indies, returning to New England waters in the spring to continue those duties through the summer and fall of that year. Following a cruise to Halifax and overhaul at Boston, the escort carrier stood out 5 January 1954 for a two-month Mediterranean cruise, returning to Quonset Point on 12 March for reserve training and other exercises. She became the first of her class to have jets make touch-and-go landings on the flight deck while she had no way on, a dangerous experiment successfully conducted on 9 June 1954.

Gilbert Islands left Rhode Island on 25 June 1954 for Boston and decommissioned there on 15 January 1955. Reclassified as an aircraft ferry (AKV-39) on 7 May 1959, Gilbert Islands remained in reserve until her name was stricken from the Navy List on 1 June 1961. Five months later, the old warship was reinstated on the Navy List and she was reclassified as a communications relay ship (AGMR-1) on 1 June 1963. Renamed Annapolis on 22 June 1963, the communications relay ship recommissioned on 7 March 1964, Capt. John J. Rowan in command.

As the Navy's first major communication relay ship, Annapolis was designed to provide a mobile command and control communications center for areas where shore-based communications do not exist or are inadequate. In addition to handling message traffic through teletype or multi-channel radio circuits, the ship had approximately 30 radio transmitters, with five major antenna towers installed on the former flight deck, now called the antenna deck. By relaying large volumes of routine message traffic through Annapolis, the communications relay ship lightened the traffic load on regular ship-to-ship or ship-to-shore circuits. This was a critical function during crisis response or humanitarian operations, as the large number of ships often clogged up the frequencies available. As part of her acceptance trials, Annapolis demonstrated those capabilities by handling fleet broadcasts and ship-to-ship communications during Operation Steel Pike, an 80-ship U.S.-Spanish exercise held in October, before officially joining the Atlantic Fleet on 16 December 1964. 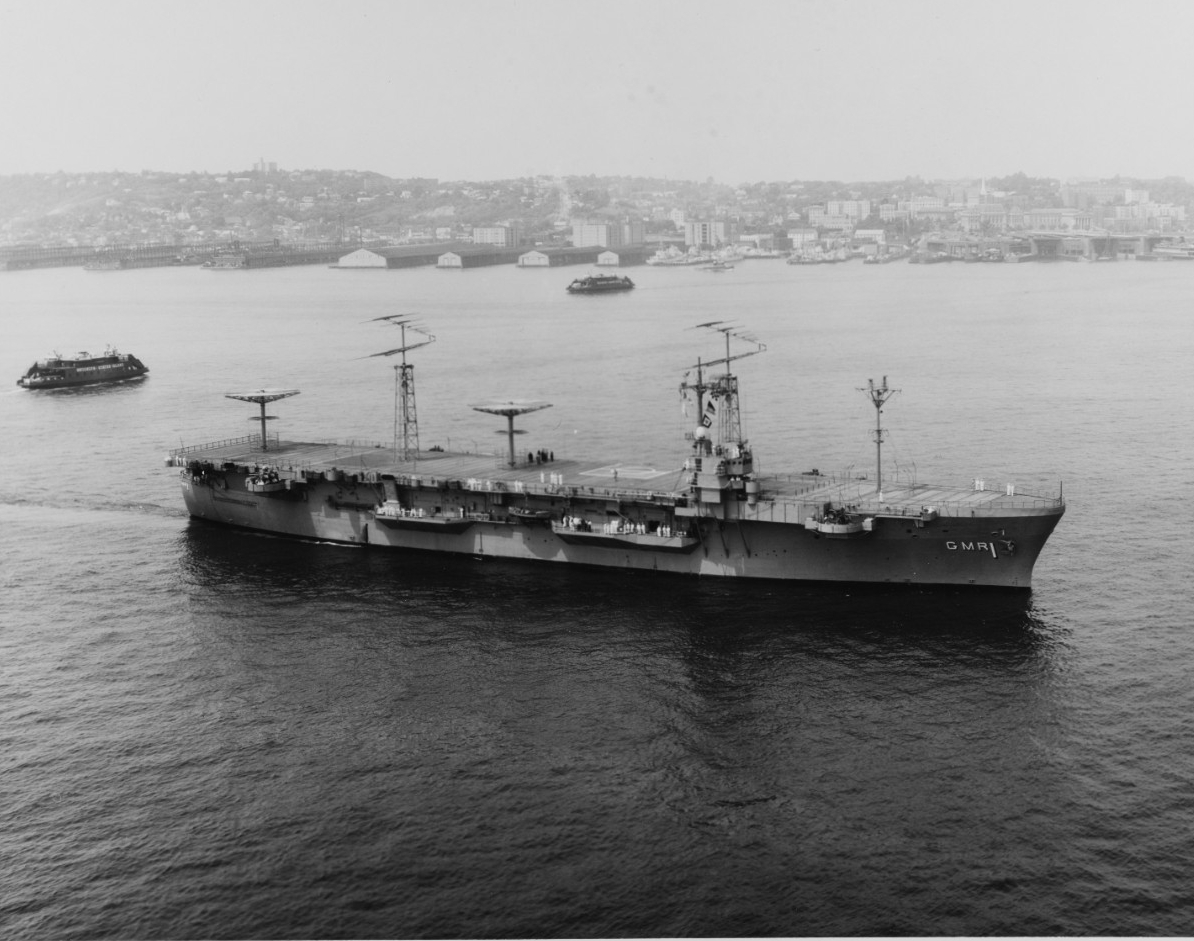 After operations out of Norfolk during the first half of 1965, Annapolis was assigned Long Beach as home port on 28 June 1965. In September she got underway for the Far East, providing fleet communications services for Seventh Fleet units off the coast of Vietnam. The ship mainly served as the relay point by which Seventh Fleet units sent mesages to ground-based Western Pacific communications stations but she also provided cryptographic support and rebroadcast fleet bulletins as well as daily news summaries to the Fleet. For such services, Annapolis received a Meritorious Unit Commendation for Fleet operations in Southeast Asia from 9 January 1967 to 29 January 1968. With the exception of periodic port visits to Hong Kong, Formosa, and the Philippines for liberty and upkeep, as well as periodic overhauls at Yokosuka, Japan, Annapolis remained on station in the western Pacific for the next four years, conducting 19 communications patrols before finally turning for home on 9 April 1969.

The ship initially sailed into the Indian Ocean, visiting the Mauritius' and Angola in May before sailing around the Cape of Good Hope enroute to Senegal. On 19 May 1969 Annapolis crossed the equator at 00'00 latitude and 00'00 longitude, initiating her Royal Order of Trusty Shellbacks into the Golden Order of Shellbacks. Following a short visit to Dakar, the ship stopped at Lisbon, Portugal and Rota, Spain, before commencing two months of operations with Sixth Fleet out of Naples, Italy. Finally underway for home on 29 August, she arrived at Philadelphia via Norfolk on 1 October 1969.

Annapolis decommissioned at Philadelphia on 20 December 1969 and was placed in reserve. She was stricken from the Naval Vessel Register on 15 October 1976 and sold for scrap to the Union Minerals & Alloys Corp. on 19 December 1979.