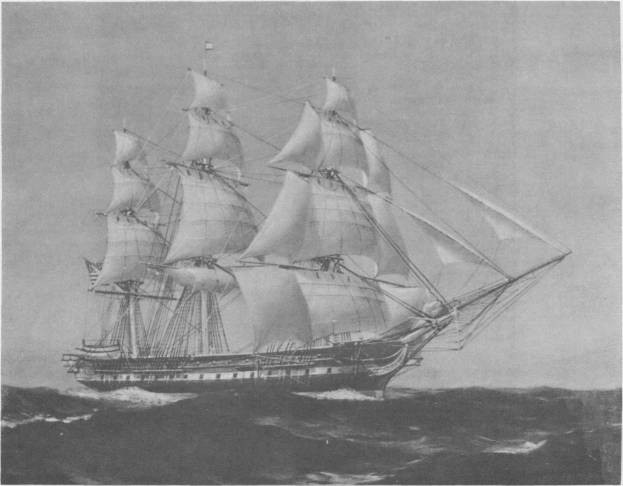 Caption: A painting of Independence after the Ship-of-the-Line was cut down to a razee.

Independence, first ship-of-the-line commissioned in the U.S. Navy, launched on 22 June 1814 in the Boston Navy Yard, Mass. She immediately took on guns and was stationed with frigate Constitution to protect the approaches to Boston Harbor and remained there until the end of the war with Britain.

Wearing the broad pennant of Commodore William Bainbridge, and under command of Capt. William Crane, the warship led a squadron out from Boston on 3 July 1815, beginning her first overseas cruise. Proceeding to the Mediterranean, Independence was intended to reinforce the squadron then serving under Capt. Stephen Decatur and engaged in preventing corsair attacks by the Barbary Powers against American merchant commerce.

Although Decatur had obtained a peace agreement before her arrival, Independence led an impressive show of force before the Barbary ports, encouraging them to keep the peace. With the weather turning rough later in the year, Independence returned to Newport, R.I., on 15 November 1815. She continued to wear the pennant of Commodore Bainbridge at Boston until 29 November 1819, Commodore John Shaw broke his flag in the ship until she was placed in ordinary in 1822.

Independence remained in ordinary at Boston until 1836 when she was razed or cut down to one covered fighting deck with poop and forecastle. She was rated down to 54 guns as her configuration gave way to that of a very large frigate. She proved to be one of the fastest and most powerful "frigates" of the Navy.

Independence recommissioned on 26 March 1837, sailing from Boston on 20 May as the flagship of Commodore John B. Nicholson. George Dallas, Minister to Russia, sailed on board Independence for her record passage across the Atlantic to England. She arrived at Portsmouth, England, on 13 June, called at Copenhagen; then proceeded into Cronstadt (Kronstadt), Russia, on 29 July 1837, to receive a visit from Emperor Nicholas I of Russia. Two days later a steamboat arrived to transport Dallas and his family to St. Petersburg.

Having received marked social courtesies from the Russian government, Independence departed Kronstadt 13 August 1837 for Rio de Janeiro, where she became flagship of the Brazil Squadron to guard American commerce along the eastern seaboard of South America. This duty continued into the spring of 1839, when Commodore Nicholson attempted mediation to end the war between France and Argentina. He reported on 22 April 1839 that: "I volunteered, as I conceived it a duty I owed to my Country, as well as to all Neutrals, to endeavor to get peace restored that commerce should be allowed to take its usual course. In accordance of the feelings of humanity at least, I hope my endeavors will be approved by the Department... I see no probable termination of this War and Blockade which is so injurious to the Commerce of all Neutrals..."

Independence returned north to New York on 30 March 1840. She was laid up in ordinary until 14 May 1842 when she became flagship of Commodore Charles Stewart in the Home Squadron. Basing at Boston and New York, she continued as his flagship until laid up in ordinary on 3 December 1849. Independence recommissioned on 4 August 1846 and the Nation was at war with Mexico as she departed Boston on 29 August 1846 for the coast of California. She entered Monterey Bay on 22 January 1847, and became the flagship of Commodore William B. Shubrick, commanding the Pacific Squadron.

Independence assisted in the blockade of the Mexican coast, capturing Mexican ship Correo and a launch on 16 May 1847. She supported the capture of Guaymas on 19 October, and landed bluejackets and Marines to occupy Mazatlán on 11 November 1847. She later cruised as far as the Hawaiian Islands, arriving at Honolulu on 12 August 1848. Independence returned to the East Coast at Norfolk, Va., on 23 May 1849, decommissioning there on 30 May.

Recommissioned on 7 July 1849, Independence departed Norfolk on 26 July under Capt. Thomas A. Conover, to serve as flagship of the Mediterranean Squadron under Commodore Charles W. Morgan. She became the first U.S. man-of-war to show the flag at La Spezia, Kingdom of Sardinia, arriving on 23 May 1850 for an enthusiastic welcome. She returned to Norfolk on 25 June 1852 and was placed in ordinary at New York on 3 July 1852.

Independence recommissioned on 4 September 1854 and sailed from New York on 10 October to serve as flagship of the Pacific Squadron under Commodore William Mervine. She arrived at Valparaiso, Chile, on 2 February 1855. Her cruising grounds ranged northward to San Francisco and west to the Hawaiian Islands. Proceeding from Panama Bay, she entered the Mare Island Navy Yard, Calif., on 2 October 1857. She served as receiving ship there until decommissioned on 3 November 1912. Her name was struck from the Navy List on 3 September 1913.

Independence did not leave the Mare Island Navy Yard until 28 November 1914. Sold to John H. Rinder, she was towed to the Union Iron Works, San Francisco. On 5 March 1915 she shifted to Hunter's Point, and remained there for a week. Some repairs were made and a plan formulated to use her as a restaurant for the Panama-Pacific Exposition, though it never came to pass. Pig iron and ballast were later removed from her hold and valuable hard wood salvaged from her orlop deck knees. On the night of 20 September 1919, Independence was burned on the Hunter's Point mud flats to recover her metal fittings. The sturdy veteran of the days of wooden ships and iron men had survived more than a century, 98 years of which were spent serving the U.S. Navy.