Ralph McMaster Rich was born on 22 January 1916, in Denmark, Ward County, North Dakota, to Ralph W. Rich and Agnes H. Rich. Ralph attended college at the University of Minnesota, graduating in the summer of 1939, and then enlisting in the U.S. Naval Reserve on 12 October 1939 at Minneapolis, Minnesota. He received his initial flight training in Minnesota, and then on 28 December 1939, Aviation Cadet Rich reported for active duty at Pensacola, Florida. Rich, received designation as a Naval Aviator on 12 July 1940, and was then commissioned as an ensign on 16 August of that same year.

On 28 November 1940 Rich was assigned to Fighting Squadron (VF) 6, stationed on board the aircraft carrier Enterprise (CV-6). The carrier was operating with Task Force 8, west of the Hawaiian Islands on 7 December 1941, when Japan launched a surprise attack against U.S. forces at Oʻahu, T.H. Having been underway at the time of the attack, Enterprise and the other carriers of the Pacific Fleet avoided the initial onslaught, but were nonetheless quickly called upon to engage Japanese forces. For this reason, Rich participated in several of the initial actions of the war in the Pacific.

Rich flew his Grumman F4F Wildcat fighter in support of a raid on the Marshall Islands on 1 February 1942 and received credit for destroying a Mitsubishi G4M Type 1 land attack plane that was still on the ground. Toward the end of the month, on the 24th, he participated in the air raid on Wake Island as well. On 28 November 1942, Rich was promoted to the rank of Lieutenant (j.g.). 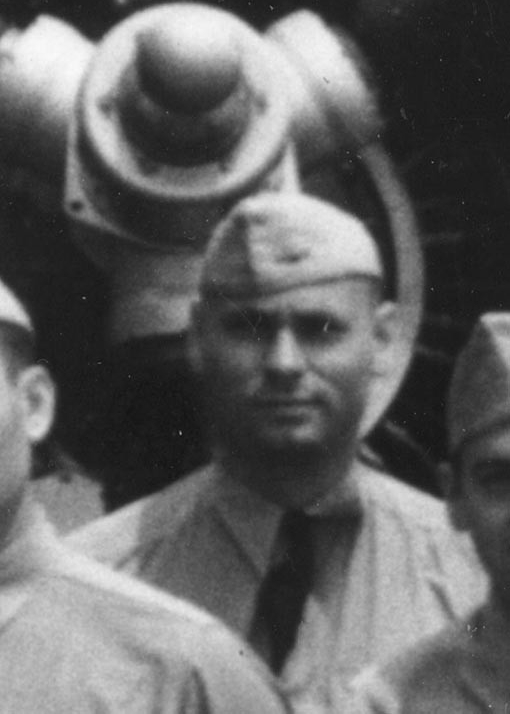 Caption: Ens. Ralph M. Rich, Fighting Squadron 6 (VF-6). This photograph was taken on board Enterprise (CV-6) in January 1942, just prior to the Marshall Islands raid. The propeller hub of a Grumman F4F-3 Wildcat fighter is directly behind Rich. (Naval History and Heritage Command Photograph NH 99078)

Notably, Rich also participated in the showdown between American and Japanese forces at Midway from 4 to 6 June 1942. During the action, Rich and a group of his fellow fighters covered the approach of American dive bombers attacking the Japanese fleet. He then demonstrated aggressive and capable leadership during the battle by splashing a Nakajima B5N2 Type 97 carrier attack plane while providing combat air patrol over the carrier Yorktown (CV-5). The Battle of Midway proved to be a decisive American victory that had lasting ramifications on Japan’s ability to prosecute the rest of the war.

Tragically, on 18 June 1942, while Rich was participating in aerial gunnery practice over the Hawaiian Islands, his Wildcat lost a wing and crashed, instantly killing the young lieutenant. Despite his untimely loss, Rich was posthumously awarded the Navy Cross, his citation referencing his heroic leadership during the Battle of Midway, which enabled his attack group to “maintain continuous flight over enemy naval units, thereby assuring our dive bombers an unmolested approach.”

After her commissioning Rich remained moored in New Orleans, port side-to berth 5 for several weeks departing her moorings only to bring on fuel and supplies in preparation for her shakedown. On 10 October, the escort ship finally stood out of the Mississippi River Channel en route to Great Sound, Bermuda, British West Indies. As she put out to sea for the first time, she transported a notably ‘green’ crew, some 80% of whom “had never been to sea before.” Despite some heavy weather which tested the sea legs and stomachs of the new sailors she arrived safely at her destination on 15 October.

Following a productive shakedown in which the crew’s “experience and training progressed very favorably,” Rich stood out of Great Sound on 9 November 1943 and steamed for the Boston [Mass.] Navy Yard, for post shakedown availability. She arrived on 11 November and shortly thereafter entered the dry dock for some minor repairs and alterations.

On Friday, 3 December 1943, Rich stood out of Boston Harbor to begin her first war-time mission escorting transports to Argentia, Newfoundland. She rendezvoused with Task Unit (TU) 29.1.1, on 4 December, and assumed her duties in the screen roughly 2,000 yards from the auxiliary ship Antaeus (AG-67). Rich arrived at Argentia on the 5th and moored port side to berth H. Underway the next day the escort ship voyaged with TU 29.1.1 to Davisville, R.I. On 9 December, prior to her arrival at Davisville, Rich received orders to proceed independently to Newport, R.I., where she arrived on the 10th, mooring to Buoy No. 1.

Within only a few hours of her arrival at Newport, Rich got underway to escort the U.S. merchant ship Alcoa Patriot to a rendezvous point off Hampton Roads, Va. They arrived at their meeting point on 11 December 1943 and shortly thereafter joined Task Group (TG) 29.18, charged with escorting merchant ships to the Panama Canal Zone. The convoy arrived without any confirmed submarine contacts on 17 December, and Rich moored starboard side to Pier 8, Cristobal, C.Z.

A few days after arriving at Cristobal, Rich got underway on 19 December 1943, in accordance with a special dispatch to escort the New Zealand light cruiser HMNZS Leander to Boston. Rich, along with the escort ship Barber (DE-161), delivered Leander as ordered on 23 December, and Rich moored port side to Pier 1, West, South Annex, Boston Navy Yard. The ship had a week of availability and then on Wednesday, the 29th, at approximately 1422, she got underway to escort convoy VT 6. On the 30th Rich received orders to leave the convoy and she steamed independently to Casco Bay, Maine, arriving there the following day.

At Casco Bay, Rich conducted refresher training with the escort ships Amesbury (DE-66) and Bunch (DE-694). Training at Casco Bay concluded on 6 January 1944, and Rich got underway at 0745 in company with Escort Division (CortDiv) 19 en route to New York, N.Y. Rich arrived at Tompkinsville, Staten Island, N.Y., on the 7th and moored starboard side to Pier 10. On 9 January Rich stood out from N.Y., as part of CortDiv 19 for her first trans-Atlantic convoy. She arrived at Londonderry, Ireland on the 19th.

Rich departed Londonderry on 27 January 1944, and after arriving back in New York on 7 February, she went into dry dock for just over a week. Rich had minor repairs done and made a few day trips outside Gravesend Bay for various exercises but she primarily remained at port. She stood out from N.Y., on 26 February, dropping her anchor later that evening in Sandy Hook Bay and passing the night there. The following morning, she stood out with Task Force (TF) 69 to act as a screen for the left flank of convoy UT 9 bound for Lisahally, Ireland. Rich arrived at Lisahally on 9 March and moored in berth B.

On 14 March 1944, Rich got underway again, standing down the River Foyle to conduct tactical exercises; after which, at around 1639, she anchored at Lough Foyle off Moville, Ireland. The following day, on the 15th, the escort ship departed Lough Foyle and rendezvoused with convoy TU 9 headed back to New York. Early on in the voyage Rich diverted a small fishing vessel from the path of convoy, but the journey was otherwise uneventful. The escort ship arrived at N.Y., on 25 March, mooring alongside berth D, Pier 4, and then, a few days later on the 27th, she entered the dry dock.

“Standing out of New York Harbor,” on 6 April 1944, Rich took up her screening station with convoy UT 11 bound for Ireland. She arrived at Lisahally on 15 April and moored port side in berth D. She remained in port at Lisahally for nearly a week and then on 20 April, Rich proceeded through the North Channel headed for the Irish Sea. Rich rendezvoused with convoy TU 11 on the 22nd and then began the voyage back to N.Y., arriving there on 1 May.

Rich got underway for another passage across the North Atlantic on 12 May 1944, as a part of Task Group 21.8, escorting convoy TCU 12, and arrived at Londonderry on the 23rd. The escort ship moored at Londonderry for the remainder of the month waiting to get underway with a return convoy to the East Coast. The convoy finally departed Ireland in the first week of June, but just prior to her departure Rich, received word that she would be taking part in Operation Overlord—the invasion of German-occupied Normandy, France.

Specifically, Rich took part in Operation Neptune, the naval phase of the invasion. On 5 June 1944, she steamed with TF 125 towards the Normandy coast acting as an escort for heavy ships and transports moving across the English Channel. The action commenced on the 6th, and Rich began screening large warships as they shelled German defenses along Utah Beach in support of troop landings. She dutifully managed that task for the next two nights.

On the morning of 8 June 1944, Rich steamed to her screening station off Utah Beach, seaward of the battleship Nevada (BB-36); the heavy cruisers Quincy (CA-71) and Tuscaloosa (CA-37); and the British light cruiser HMS Black Prince. At approximately 0845, Rich proceeded to stand by the destroyer Glennon (DD-620), which had struck a mine northwest of the Saint-Marcouf Islands. Rich arrived shortly thereafter and came up on Glennon’s starboard side, close aboard.

Shortly after Rich made contact, she was informed that her assistance was not needed and then at approximately 0920, a mine exploded off the ship’s starboard beam which, significantly “staggered,” her crew. Depth charges were set on safe and a damage assessment started, however, within just a few minutes another mine went off directly underneath the ship. As the commanding officer, Lt. Cmdr. Michel recalled in his report, men on the bridge, “were thrown to the deck and upon recovering it was observed that about fifty feet of stern had been blown completely off and was slowly drifting away.” 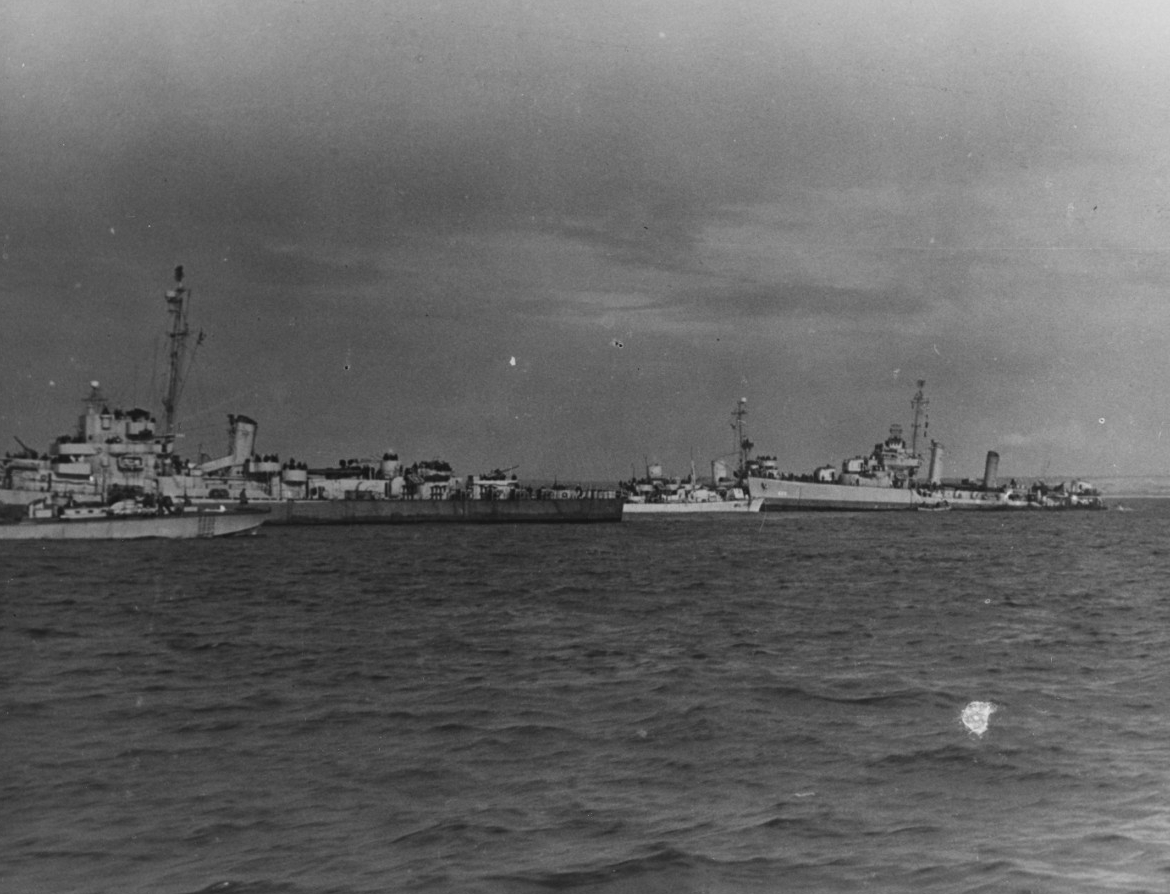 Caption: Glennon (right), after her stern was blown off by a mine, off Utah Beach, Normandy, on 8 June 1944. Rich, is pictured, left, standing by along with a U.S. PT boat, a British motor launch, and a U.S. Auk class minesweeper. (Naval History and Heritage Command Photograph NH 44311) 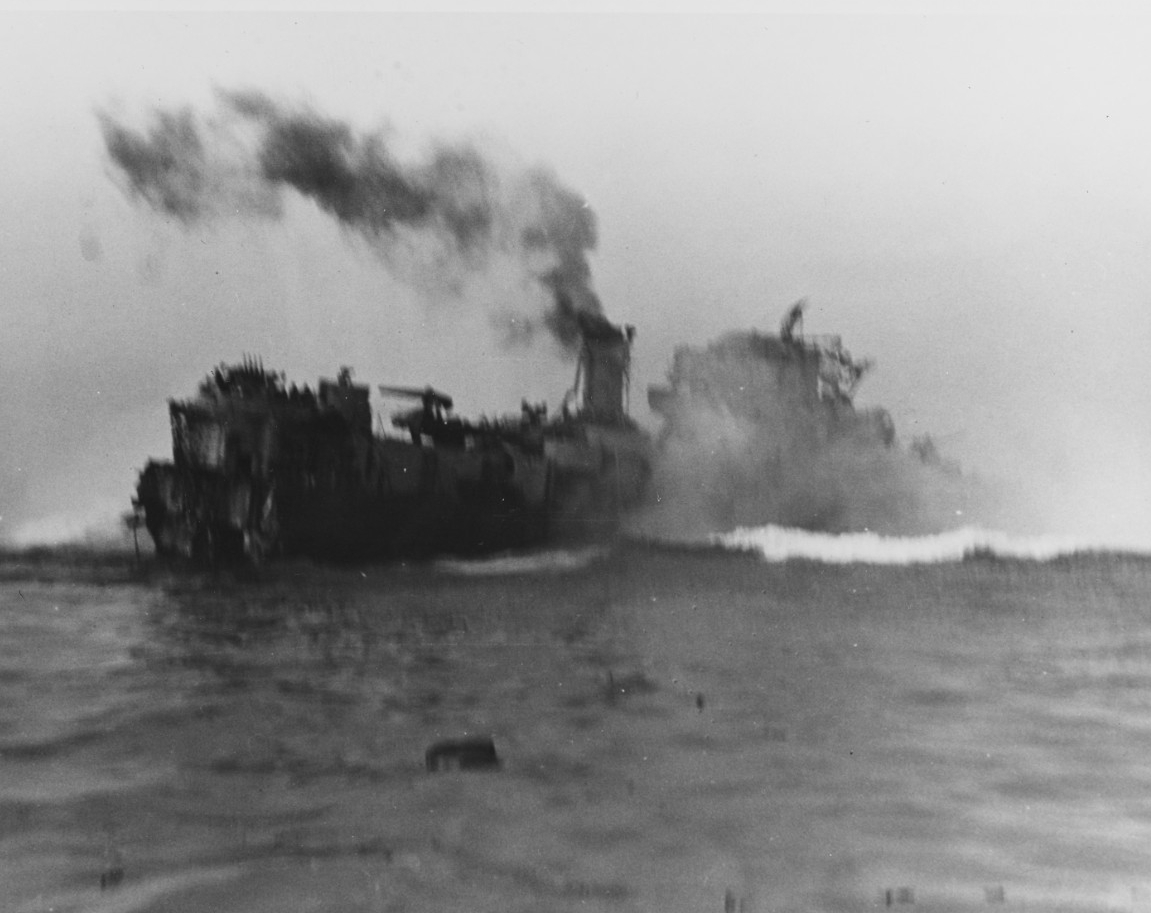 Caption: Rich striking a mine, amidships, while operating off Utah Beach on 8 June 1944. Just moments before she had hit another mine, which severed her stern. (Naval History and Heritage Command Photograph NH 44312)

A third and final explosion came only a short time later, with Lt. Cmdr. Michel’s only recollection of it being a “sensation of flying through the air.” The forward section of the ship buckled, and upon regaining consciousness Michel gave the order to abandon ship. With that Rich began her descent to the bottom of the Bay of Seine, some three miles from the Saint-Marcouf Islands, located at approximately 49°31'N, 01°10.5'W. Of her gallant crew 27 were killed; 73 wounded; 62 reported missing; and 54, including Michel, were recovered and eventually returned to duty.

Rich was stricken from the Navy Register on 29 July 1944. 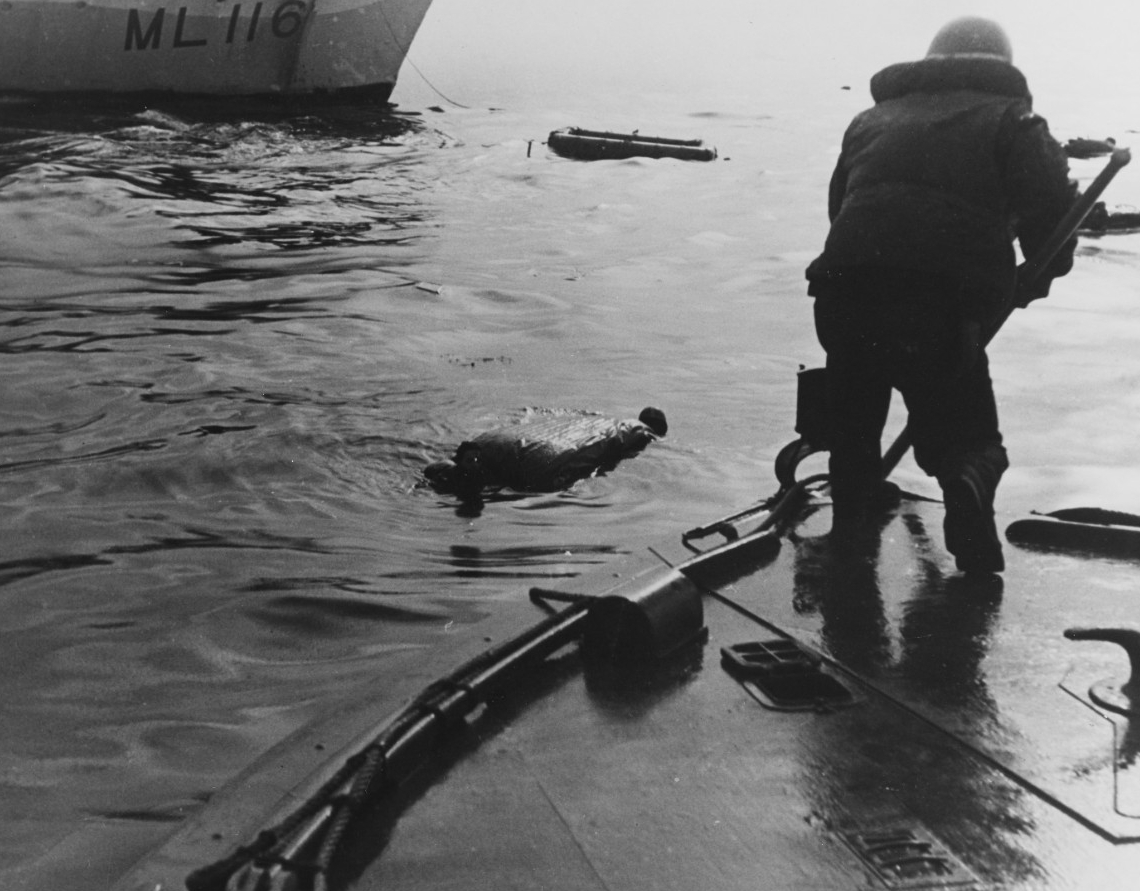 Rich was awarded one battle star for her World War II service.