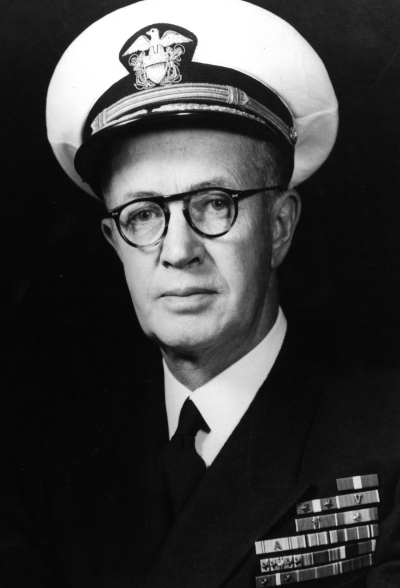 The end of hostilities in Korea three weeks before Admiral Carney became Chief of Naval Operations was attended by reduction in force levels and redeployment. While guns were momentarily silenced following the Korean truce, trouble spots persisted in Southeast Asia and elsewhere, where aggressive threats to peace required a strong naval presence and much of the Chief of Naval Operations’ attention.

The close of the French-Viet Minh War and the division of Vietnam at the 17th parallel stranded vast numbers of refugees who desired not to remain in Communist-dominated North Vietnam. Beginning in August 1954 and continuing until July of the next year, the U.S. Navy organized and conducted a huge humanitarian operation: Passage to Freedom. Some 300,000 refugees and thousands of tons of cargo were sealifted from North to South Vietnam. Admiral Carney directed the operation as a result of the Navy’s responsibilities as executive agent for the Pacific Command.

At the request of the Republic of China, elements of the U.S. Seventh Fleet helped evacuate the military garrison and civilian population from the beleaguered Tachen Islands just off the China coast. Although the removal took place within range of Communist artillery, the presence in strength of Seventh Fleet carriers, cruisers, and destroyers was sufficient deterrent to any overt action by the mainland Chinese.

The demands of the Passage to Freedom and Tachen Islands operations reinforced Admiral Carney’s conviction that the post-Korean War Navy must be a versatile, balanced force capable of meeting any spectrum of hostile situations from an atomic confrontation to localized brush fire conflicts.

An area of major thrust by Admiral Carney as Chief of Naval Operations was modernization of the Navy. In public speeches and in appearances before Congress seeking shipbuilding appropriations, he stressed the acute threat of “block obsolescence,” that is, the danger that large segments of the fleet, built during World War II, would grow old and unserviceable all at once.

A dramatic and revolutionary development became reality with the commissioning and initial cruise of the submarine USS Nautilus—the world’s first nuclear-powered ship. And on December 11, 1954, USS Forrestal, the first of a new generation of aircraft carriers, was launched.

While working to update ships and weapons and incorporate the new technology, Admiral Carney never lost sight of the fact that the nation’s sea strength rested on the men and women of the Navy. To retain highly qualified personnel, the Chief of Naval Operations devoted himself to making naval careers attractive and increasingly rewarding.

Robert Bostwick Carney was born in Vallejo, California, on March 26, 1895. His 43-year naval career began in 1912, as he became a Naval Academy midshipman. After graduation in 1916, he joined the battleship USS New Hampshire. He was Torpedo and Gunnery Officer of the USS Fanning when she sank the German submarine U-58.

Between the wars, Carney commanded several destroyers and a cargo ship, and served as gunnery and executive officer in battleships and cruisers and with fleet staffs. Navy Department duty ashore included Fleet Training Division, Office of the Chief of Naval Operations, and small craft program coordination in the Secretary of the Navy’s office.

When the United States entered World War II, he was serving on the staff of Commander, Support Force, Atlantic Fleet, involved in convoy escort operations. From October 15, 1942, until July 1943, Captain Carney commanded the cruiser USS Denver, participating in Solomon Islands actions. He was promoted to rear admiral on July 26, 1943, and became Chief of Staff to Admiral William F. Halsey Jr., Commander, South Pacific Force, and Commander, Third Fleet. Admiral Carney remained with Admiral Halsey throughout the remainder of the Pacific war campaigns. He concluded arrangements with the Japanese for entry of the Third Fleet into Tokyo Bay and accepted the surrender of Yokosuka Naval Base.

Admiral Carney died in 1990 of heart failure in Washington, DC, and is buried in Arlington National Cemetery.