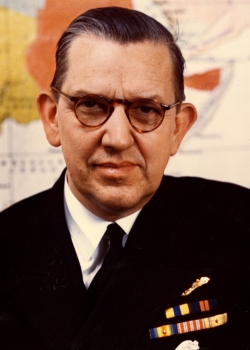 Admiral Denfeld’s term as Chief of Naval Operations was a time of stringent peacetime economy and severe cutbacks in the national defense budget. Competition for the limited funds and intense debate over the roles, force levels, and missions of the three military services followed enactment of the National Security Act of 1947. At the same time, the need continued for U.S. naval forces to counter increasing threats to peace in the Mediterranean and Far Eastern waters.

The Chief of Naval Operations emphasized the goal of coordination of effort. He voiced Navy support of the unification concept on the basis of each service being admitted to full membership on the defense team.

Admiral Denfeld expressed grave concern over the prospect that during this period of ferment, transition, and a sharply reduced fleet, the Navy could be relegated to solely a convoy and antisubmarine role. Aware also of the dangers inherent in over reliance on a single weapon system, such as strategic bombing, he called for a balanced national defense.

The Chief of Naval Operations resolutely set forth the nation’s need of balanced naval forces to support the United States’ interests in times of peace, to deter war, and to be prepared for defensive and offensive missions in times of war. To meet these commitments to national security, Admiral Denfeld reasoned logically, the Navy must have the Marine Corps, aircraft carriers, and the modern weapon systems made possible by ever expanding technology research. He also recognized the Navy needed to move forward development to provide the Navy with carrier-based atomic attack capability. Other areas of emphasis included antisubmarine warfare and airborne and surface-launched guided missiles. The seaplane tender USS Norton Sound was converted to a mobile missile testing platform.

In April 1948 the Soviet Union precipitated a major crisis by cutting off land access to West Berlin. U.S. Air Force planes were joined by naval aircraft in the celebrated Berlin Airlift. Hundreds of thousands of tons of food and supplies were shuttled to the isolated city, while Navy tankers delivered millions of gallons of aviation gasoline at Bremerhaven, Germany, to keep the humanitarian lift going and break the Russian blockade.

The Navy assumed sealift responsibilities for all the armed services on October 1, 1949, when the Military Sea Transportation Service (MSTS) was established under the command of the Chief of Naval Operations.

Although Admiral Denfeld’s testimony before Congress and his public statements on strategy for national security and the maintenance of strong, ready naval forces reflected thoughtful moderation, he was relieved as Chief of Naval Operations prior to the completion of his tour.

Louis Emil Denfeld was born in Westboro, Massachusetts, on April 13, 1891. Entering the U.S. Naval Academy from Minnesota, he graduated in 1912 and, following the pattern of the period, went to battleship duty. His World War I service was in USS Ammen, a destroyer based on Queenstown, Ireland. He continued in destroyers after the war, including command of USS McCall. In 1922, Denfeld, then a lieutenant commander, reported to New London for instruction in submarines. He served in USS S-30 and commanded USS S-24 until June 1924, when he was detailed to the Office of the Chief of Naval Operations for duty in the Ships Movements Division. This shore tour was followed by command of destroyer USS Brooks.

Between 1929 and World War II, Denfeld alternated between the Bureau of Navigation, destroyer division command, and duty on major staffs afloat. As a rear admiral, he was Assistant Chief of the Bureau of Naval Personnel from January 1942 to March 1945. He then commanded Battleship Division Nine, and with his flag on USS Wisconsin, he participated in the Okinawa operation and bombardment of the Japanese home islands.

Immediately after Japan’s surrender he returned to Washington, DC, as Chief of the Bureau of Naval Personnel with
the rank of vice admiral. He directed the Navy’s successfully concluded demobilization program and effected personnel plans
for the postwar Navy. On February 28, 1947, Admiral Denfeld was named Commander in Chief, Pacific, and Commander in Chief, U.S. Pacific Fleet, and was so serving when appointed Chief of Naval Operations.

Admiral Denfeld retired on March 1, 1950, and returned to live in his birthplace, Westboro, where he died on March 28, 1972. He is buried in Arlington National Cemetery.