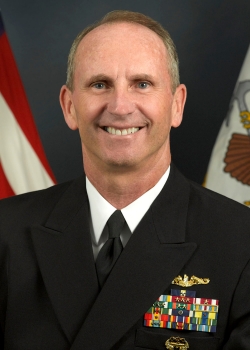 Admiral Jonathan Greenert harnessed innovation to build a relevant and capable future Fleet during a period of growing security challenges and fiscal uncertainty. Greenert’s combination of disciplined leadership, operational experience, and budget acumen enabled him to navigate strategic and financial changes and leveraged technical and organizational advances to meet the Navy’s mandate of providing access and maritime dominance where it matters, when it matters.

As Chief of Naval Operations, Greenert led initiatives to establish enduring warfighting advantages, improve forward presence, and enhance readiness.  He spearheaded new concepts for undersea, electromagnetic maneuver and cyber warfare to build on longstanding strengths of the Navy while expanding the use of unmanned systems in all domains.  Propelling these concepts forward, he deployed laser technology afloat for the first time, pushed the electromagnetic railgun for at-sea testing and transition, and watched the first carrier-landing of an unmanned system.

Further increasing the capacity and reach of naval forces, he implemented new approaches to enhance the relevance and capability of the Fleet through modular and reconfigurable ships and more flexible personnel management systems. To address an increasingly contested maritime environment with limited resources, Greenert expanded the forward basing and deployment of naval forces around the world, in addition to accelerating a number of speed-to-fleet initiatives.   He stressed the innovative use of auxiliaries to carry adaptive force packages, initiating a period of experimentation that allowed the Navy to maximize the utility of every Fleet asset and weapon.  In the Arabian Gulf, he responded to Iranian rhetoric by doubling the number of minesweeping and patrol ships, converted a retired LSD and deployed it as an afloat forward staging base, deployed new unmanned ISR, mine detection and countermeasure technologies, and built a multi-national coalition to demonstrate international resolve.  In the Asia Pacific region, he increased the number of forces, deployed the newest capabilities, and fostered improved understanding between navies, which led to the passage of the Code for Unplanned Encounters At Sea (CUES) and solidified Singapore as a new forward operating location for the Littoral Combat Ship.  To improve the readiness of the fleet, Greenert implemented a new plan to train and prepare ships for deployment, filled personnel gaps at sea, sustained education opportunities for Sailors, and expanded opportunities for women in submarines and special warfare.

Greenert is a recipient of various awards including the Distinguished Service Medal, Defense Superior Service Medal, and Legion of Merit.  In 1992, he was awarded by his peers the Vice Admiral Stockdale Award for inspirational leadership.