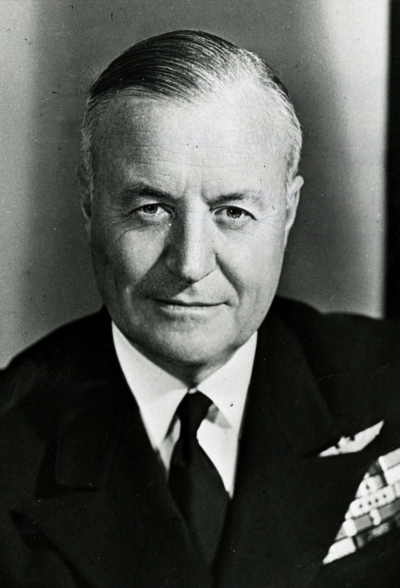 U.S. Navy control of the sea was essential to the movement of men and supplies, the mounting of amphibious assaults, ship gunfire, air support, and coastal blockade. Superimposed on Korean War tasks was President Truman’s order to the Seventh Fleet to prevent an invasion of Formosa by the Chinese Communists and also bar Nationalist attacks against the Chinese mainland.

The Chief of Naval Operations rapidly deployed naval forces to the Western Pacific. Mothballed ships in the reserve fleets were reactivated and, to help man them, Naval Reservists were called to active duty.

Admiral Sherman played a prominent role in shaping the Korean War strategy. He recommended a blockade of the North Korean coast and went to Japan to participate in planning the historic “end-run” amphibious assault at Inchon that sent the North Korean invaders reeling back.

Modern Russian mines encountered at Wonsan and elsewhere presented a serious threat to the projection of strength ashore in the combat zone. “When you can’t go where you want to, when you want to,” said Admiral Sherman referring to the mine hazard, “you haven’t got command of the sea. And command of the sea is a rock bottom foundation of all of our war plans.” He assigned the highest priority to mine countermeasures, an area that had languished in the post-World War II economy. An intensive reactivation in the program swiftly readied mine vessels for service in the Far East.

In 1950 the Navy gained its initial capacity for nuclear attack by carrier aircraft, the forerunner of an operational capability as a major sea-based deterrent force.

The Chief of Naval Operations went to Europe in the summer of 1951. At the conclusion of a highly successful military-diplomatic mission, including conversations with Generalísimo Francisco Franco regarding establishing U.S. bases in Spain, Admiral Sherman succumbed to a heart attack in Naples on July 22, 1951.

Forrest Percival Sherman was born in Merrimack, New Hampshire, on October 30, 1896, and graduated in the Naval Academy class of 1918. World War I found him serving afloat in the Mediterranean and Atlantic. He received his first command, the destroyer USS Barry, in 1921. The next year Sherman reported to the Naval Air Station, Pensacola, for flight training. On December 22, 1922, he was designated a naval aviator and ordered to Fighting Squadron Two, Battle Fleet.

Instructor duty at Pensacola and study at the Naval War College were followed by duty on board carriers USS Lexington and USS Saratoga. During the academic year 1930–1931, Sherman taught in the Department of Seamanship and Flight Tactics at the Naval Academy and then returned to Saratoga for a second tour.

Following assignments in the Bureau of Ordnance, the Office of the Chief of Naval Operations, and on major fleet staffs, Captain Sherman was ordered to command carrier USS Wasp in May 1942. He commanded her on September 15, 1942, when Wasp, heavily damaged by an enemy submarine attack during the Guadalcanal campaign, had to be sunk by friendly forces to avoid falling into enemy hands. Sherman was designated Chief of Staff to Commander, Air Force, Pacific Fleet, in which assignment he was promoted to rear admiral before being transferred to duty as Deputy Chief of Staff to Commander in Chief, Pacific Fleet and Pacific Ocean Areas. Admiral Sherman represented the Navy in the initial surrender conferences with the Japanese at Manila in August 1945 and was present onboard USS Missouri when the formal surrender was signed.

Of his untimely death, General Hoyt Vandenberg, Air Force Chief of Staff, said, “In Admiral Sherman the United States has lost one of its most brilliant military minds. He had an understanding possessed by few men of the nature of American leadership in the free world.” The admiral is buried in Arlington National Cemetery.