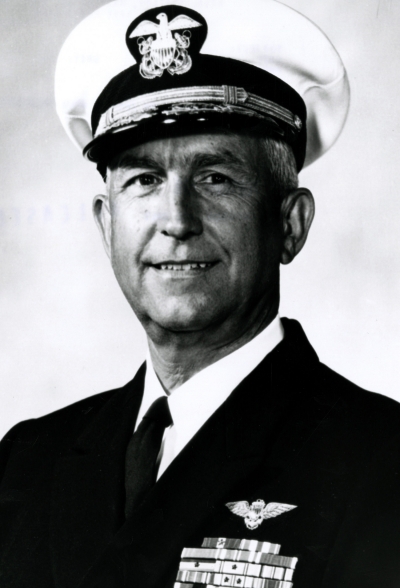 Conduct and support of operations in Southeast Asia remained the first priority item during the Moorer years in the Navy’s top assignment. The Chief of Naval Operations described the diverse nature of the Navy’s combat role in this unusual conflict: “Today, our Navy and Marine forces utilize every available technique and skill. Tactics akin to those used by gunboats in the Civil War are exploited in the Mekong Delta of South Vietnam. At the same time offshore, our carriers and amphibious task forces are operating with the most complex and sophisticated electronic and weapons systems known to man. On board our Navy river boats, the seamen’s eye and the bamboo pole are used to navigate, while far at sea satellite navigation systems guide our ships.” In-country an accelerated training program moved ahead, looking toward turning over total operational responsibilities to the South Vietnamese Navy.

The demands of the combat area strained the Navy’s capability to meet mission requirements in other sectors of the globe. Confronted, likewise, with force level reductions and the necessity to present a credible worldwide readiness posture, a vastly increased tempo of at-sea time was required of all fleet units. The resulting effect on career motivation and retention rate was severe. Admiral Moorer directed attention to meeting the needs of Navy men and their families by stating, “no matter how complex or how awesome you build the weapons of war, man is still the vital element of our defense team. Men make decisions, men fight battles, men win wars.”

Two tragic events occurred—accidental loss at sea of the nuclear submarine USS Scorpion and the boarding and capture of USS Pueblo by the North Koreans—disasters entirely different in nature, but each with considerable impact.

Time and again before Congress and the public, the Chief of Naval Operations focused on the expanding and aggressive employment of the Russian Navy. “A Soviet bear who has demonstrated a new fondness for deep salt water,” said Admiral Moorer, “represents a real and substantial challenge to free world maritime supremacy.”

Rather than quantity—“the numbers game”—for the U.S. Navy, the Chief of Naval Operations stressed quality for ships, aircraft, and personnel. “We must be prepared for almost any environment in any area of the world.” Admiral Moorer pressed for continued modernization and the phasing out of older ships to overcome the encroaching obsolescence of much of the active fleet. He drew notice to the fact that one new advanced design multipurpose ship could perform the mission of two or more old ships, and better.

Admiral Moorer considered a strong, broadly based research and development program—and incorporation of the most advanced technology—as matters of the utmost importance. He urged construction of a third Nimitz-class nuclear aircraft carrier, while pointing out the increasing significance of carrier forces as the availability of overseas land bases continued to diminish. The program of converting Polaris submarines to receive the new Poseidon missiles moved ahead.

Thomas Hinman Moorer was born February 9, 1912, in Mount Willing, Alabama. After graduation from the Naval Academy in 1933 and Gunnery and Engineering duty in cruisers, he reported to Pensacola for flight training and was designated a naval aviator in 1936. His first flight duty was on board carriers and, at the time of the Japanese attack, he was attached to a patrol squadron based on Pearl Harbor. Moving with his squadron to the Southwest Pacific in the early desperate days of the war, Moorer’s PBY was shot down off Darwin, Australia. Returning from the Pacific in July 1942, he was sent to the United Kingdom as a mining observer for Commander in Chief, U.S. Fleet. He then commanded a bombing squadron in the Atlantic and was later on the staff of Commander, Air Force, Atlantic Fleet, as Gunnery and Tactical Officer.

His immediate postwar assignment was with the Strategic Bombing Survey established by the President to study the effects of all types of air attacks on the enemy. This was followed by various sea and shore assignments including executive officer, Naval Aviation Ordnance Test Station, Chincoteague, Virginia; Experimental Officer, Naval Ordnance Test Station, Inyokern, California; a year in study at the Naval War College; and Aide to the Assistant Secretary of the Navy (Air).

Admiral Moorer died in 2004 and is buried at Arlington National Cemetery.