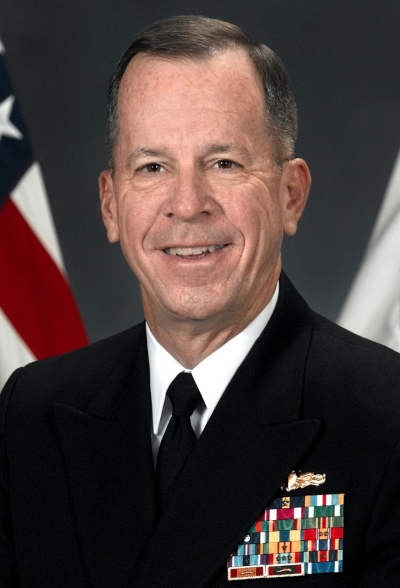 As a fleet officer, Admiral Michael G. “Mike” Mullen envisioned seapower as a show of force to deter terrorism or other acts of aggression. As Chief of Naval Operations, however, seapower began to take on a different meaning. It still included a strong forward presence in the blue waters and brown littorals, but it also included those serving on shore providing humanitarian aid or rebuilding infrastructure torn down by years of conflict.

As Admiral Mullen told students at the Naval War College in August 2005, the bigger picture relies on a “very different image of seapower” that includes “doctors and nurses healing the sick.” American warships may deter acts of violence, but it will be the service members providing aid who will change how Americans are perceived globally, Mullen explained in a 2006 interview with Seapower Magazine.

Just one month into his assignment as CNO, Hurricane Katrina made landfall in New Orleans with loss of life and property damage. On Admiral Mullen’s watch, the Navy dispatched Sailors, Seabees and more than 20 ships, including hospital ship USNS Comfort; provided medical services for the hurricane-stricken city; and oversaw search and rescue, search and recovery, and dive and salvage operations.

Despite the strain on his current fleet in directly supporting two wars, his vision never waned. “I have three priorities … and they are to get it right for our people, operate our fleet and build the fleet for the future,” he said during an All Hands call at Naval Station Norfolk in May 2007.

As the United States continued fighting in ground wars, the Navy’s role became more expansive, and its definition of seapower evolved with mushrooming threats. According to Admiral Mullen, seapower was a “forward-deployed Navy, rotational and surge capable, in support of the joint force, large enough, agile enough, and lethal enough to deter any threat and defeat any foe.”

In January 2006 Admiral Mullen established the U.S. Navy Expeditionary Combat Command (NECC) to realign the existing expeditionary units under a single type command. NECC aimed to be more capable, responsive, and effective in responding to the requirements ordered by U.S. joint combatant commanders fighting terrorism and beyond.

Admiral Mullen also developed the Navy’s 30-year shipbuilding plan, which was designed to stabilize the fleet at 313 ships from 281 ships. The 2007 plan supported the Navy’s trend toward modernization and a larger force to carry on the fight against terrorism while remaining capable of providing humanitarian relief and deterring potential combatants in the maritime domain.

During his tenure as CNO, Admiral Mullen tasked the Naval War College with creating a new maritime strategy that addressed the challenges of the time and guided the Navy in an entirely new, globally connected environment. Representatives from the CNO’s staff and the Naval War College traveled throughout the country to facilitate the Maritime Strategy Symposium Series. This effort to define a new maritime strategy for the nation included involving American citizens through a series of public forums.

The maritime forces of the United States—the Navy, Marine Corps, and Coast Guard—came together to create the unified maritime strategy. A Cooperative Strategy for 21st Century Seapower was released under Admiral Mullen’s successor, Admiral Gary Roughead.

Michael Glenn “Mike” Mullen was born in 1946 in Los Angeles. He attended the U.S. Naval Academy as a recruited basketball player and graduated in 1968. In 1985 Mullen earned a master of science degree in operations research from the Naval Postgraduate School, and in 1991 he graduated from the advanced management program at the Harvard Business School.

Before being named Chief of Naval Operations, Admiral Mullen’s final operational assignment was as Commander, Joint Force Command Naples/Commander, U.S. Naval Forces Europe. After two years as CNO, Admiral Mullen was sworn in as the 17th Chairman of the Joint Chiefs of Staff on October 1, 2007. He was nominated and confirmed unanimously for a second term, which began Oct. 1, 2009. Admiral Mullen retired on Sept. 30, 2011.