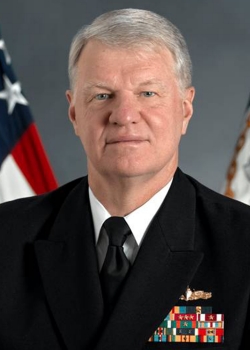 Admiral Gary Roughead assumed the Navy’s helm nearly six years into a multifront war on terror. The Navy was supporting military operations against terrorists at sea and contributing significant forces to operations against enemies on land—in Iraq, in Afghanistan, and in numerous countries around the world.

As Chief of Naval Operations, Admiral Roughead guided the Navy through a challenging period of transformation in fiscal, security, and personnel matters. He had to sustain an ambitious wartime fighting force, yet transition the 20th-century Navy to an increasingly perilous 21st-century battlespace, which included cyber warfare, the proliferation of affordable nuclear and missile technology, nonstate combatant networks and forces, the increased focus on naval power by many nations, and spiraling force acquisition costs and delivery timelines. He was also determined not to reduce the nation’s historical commitment to supremacy at sea. As he put it, he never wanted to see America’s Sailors in a fair fight.

As Chief of Naval Operations, his leadership reshaped the Navy strategically and operationally. Shortly after taking office Admiral Roughead, among others, introduced A Cooperative Strategy for 21st Century Seapower, the landmark U.S. maritime strategy document coauthored by the Navy, Marine Corps, and Coast Guard. It was, in effect, a blueprint for the future of the nation’s maritime forces and relationships with its many global partners.

Innovations under his administration restructured Navy fleets in a number of ways. He reestablished Fourth Fleet in the Caribbean and then appointed for the first time a Navy SEAL as commander of a numbered fleet. He also stood up Fleet Cyber Command as the Tenth Fleet, while consolidating the Navy’s information-related communities together in the Information Dominance Corps.

Recapitalizing a global blue-water fleet remained a priority throughout Admiral Roughead’s tour. His leadership was critical in securing investment and support for a dual-block purchase of the littoral combat ship. He advocated buying ten ships of both variants in order to rapidly expand force structure with agile, fast, and flexible platforms more capable and responsive to the threats faced at sea. The Navy also restarted the DDG-51 Arleigh Burke-class destroyer production line while truncating the DDG-1000 program to three ships.

One concerted effort launched in the wake of the 9/11 attack was the recruitment and growth of special forces—in the Navy’s case, SEALs—to more nimbly respond to world events. Efforts in this regard bore fruit in two high-profile operations during his tour as CNO. The first was the at-sea rescue of the captain of the hijacked American-flagged motor vessel Maersk Alabama, who had been taken hostage by pirates off Somalia in April 2009. The second was the successful raid and killing of Osama bin Laden in May 2011.

Two events that captured the world’s attention demonstrated Admiral Roughead’s investment in delivering capability and capacity when nations needed it most: Operation Unified Response (the U.S. military’s response to the January 12, 2010, Haiti earthquake) and Operation Tomodachi (the Department of Defense’s disaster relief to Japan following the March 12, 2011, earthquake and tsunami). Within one week of the Haiti earthquake, the U.S. Navy had dedicated 17 ships, 48 helicopters, and 12 fixed-wing aircraft in support of approximately 10,000 Sailors and Marines for Operation Unified Response. As many as 16 U.S. Navy ships participated in Operation Tomodachi. Commander, Seventh Fleet oversaw 160 search and relief air sorties for 1,100 flight hours, delivered 260 tons of relief supplies, and helped clear the ports of Hachinohe, Aomori; Miyako, Iwate; and Kesennuma, Miyagi. These disasters and the corresponding relief efforts illustrated the value of the American maritime forces in an increasingly connected world.

Admiral Roughead recognized that the influence of social media had become undeniable on the global stage and publicly espoused that government leaders who were reluctant to allow access to social media were making a strategic error. He went on to say that the Navy was irreversibly committed to engaging in social media throughout the organization and had come to realize the demand for radical transparency in external communications.

Admiral Roughead also led the Navy in another considerable change for the military force, the repeal of the “Don’t Ask, Don’t Tell” policy that prevented openly gay people from serving in the military. As CNO, Admiral Roughead led the Navy through a comprehensive training and certification program aimed at ameliorating religious and societal concerns of its members. He certified the service was ready to implement the change and, three days before Admiral Roughead left office, the policy was officially repealed on September 20, 2011.

Among his six operational commands, Roughead was the first officer to command both classes of Aegis ships, having commanded USS Barry and USS Port Royal. As a flag officer, he commanded Cruiser Destroyer Group 2, the George Washington Battle Group, and U.S. 2nd Fleet/NATO Striking Fleet Atlantic and Naval Forces North Fleet East. At the time he was on active duty, Roughead was one of only two officers to have commanded the fleets in both the Pacific and Atlantic, having commanded the U.S. Pacific Fleet and Joint Task Force 519, as well as U.S. Fleet Forces Command, where he was responsible for ensuring Navy forces were trained, ready, equipped, and prepared to operate around the world, where and when needed.

Ashore he served as the Commandant at the U.S. Naval Academy, during which time he led the strategic planning effort that underpinned that institution’s first capital campaign. He was also the Navy’s Chief of Legislative Affairs, responsible for the Department of the Navy’s interaction with Congress, and the Deputy Commander of the U.S. Pacific Command during the massive relief effort following the 2004 tsunami in Southeast Asia and the Indian Ocean.

Admiral Roughead retired on November 1, 2011, after more than three decades of service in the U.S. Navy.