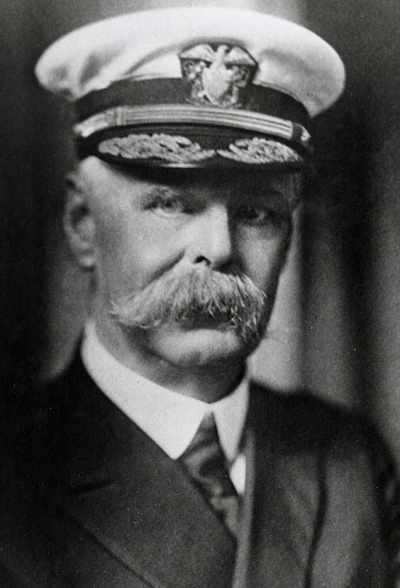 Admiral Hughes expressed three primary objectives as Chief of Naval Operations: to organize and train the fleet to the highest state of efficiency and provide a nucleus for expansion in case of national emergency, to protect American interests in the disturbed areas of the world, and to cultivate friendly relations with foreign peoples.

Aircraft carriers became part of the Battle Fleet for the first time while Admiral Hughes was Chief of Naval Operations. USS Saratoga and USS Lexington joined in 1928 and participated in
the fleet exercises of 1929 and 1930. These annual exercises convinced Admiral Hughes that an urgent need existed for additional light cruisers of improved design. The Chief of Naval Operations stated, “the light cruisers present with the fleet demonstrated their value, and the need for still larger numbers of these important craft was, as always in these problems, an obvious conclusion.” He successfully pressed for the authorization of 15 light cruisers. Likewise, the notable success of USS Saratoga and USS Lexington in the fleet exercises highlighted the requirement for expansion of naval aviation.

In testimony before the House Appropriations Committee in January 1929, Admiral Hughes asserted, “the general war readiness of the fleet is not being maintained, and increased funds are needed for this purpose.” During his term as Chief of Naval Operations, five new light cruisers were added to the fleet; USS Ranger, the first ship in the U.S. Navy designed from the keel up as an aircraft carrier, was authorized; and the number of naval aircraft increased from 297 in 1928 to a total of 875 in 1930. With the onset of the Great Depression, however, naval construction and operating funds, as well as personnel levels, were severely curtailed.

Political tumult in China and the Caribbean necessitated the presence of ships and Marines to safeguard American nationals and interests. Assistance afforded by U.S. Sailors and Marines in the Nicaraguan election of November 1928 was notable. Admiral Hughes observed that “the conduct of the election was a success in every respect; no disorder occurred, there was no intimidation of voters, and the presidential candidate of both political parties publicly acknowledged the fairness and impartiality that characterized the entire conduct of the election.”

Charles Frederick Hughes was born on October 14, 1866, in Bath, Maine. Graduation from the U.S. Naval Academy in 1888 was followed by more than a decade of virtually continuous sea duty. During this period he became an expert in deep sea sounding. In the monitor USS Monterey during the Spanish-American War, he participated in the bombardment of Manila’s defenses, and later, while on board USS Concord, took part in operations against Philippine insurgents. Various types of duties afloat and ashore including hydrographic work, torpedo instruction, and a tour in the Bureau of Equipment followed until December 1911 when he received his first command, USS Birmingham. After the Titanic disaster, Birmingham was assigned to the first ice patrol ever formed by any nation.

Captain Hughes commanded USS New York when that battleship was one of the squadron that joined Britain’s Grand Fleet during World War I. Promoted to rear admiral after the war, Hughes was assigned fleet commands of ever-increasing responsibility, briefly attended the Naval War College, and had duty as Director of the Fleet Training Division in the Office of Chief of Naval Operations. With a four-star rank, he assumed command of the U.S. Fleet, September 4, 1926, and the next year was appointed Chief of Naval Operations.

Admiral Hughes retired November 1, 1930, and died at his home in Chevy Chase, Maryland, on May 28, 1934. He is buried in Arlington National Cemetery.