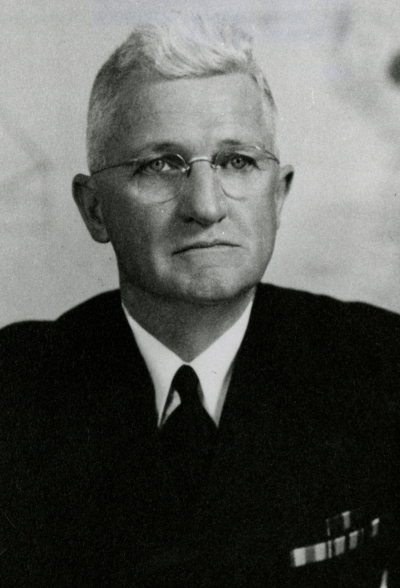 A month after Admiral Stark assumed his duties as Chief of Naval Operations, Hitler’s army invaded Poland, and World War II was underway. Western hemisphere defense and the Navy’s combat readiness were matters of such urgency as to permit no delay should the nation be drawn into the war.

To prevent belligerent actions in a zone encompassing water approaches to the Western hemisphere, President Franklin D. Roosevelt, on September 5, 1939, ordered formation of a Neutrality Patrol—an action subsequently endorsed by the Pan-American states. Within a week eight units had been organized to cover offshore waters from Newfoundland to the Guianas. The Chief of Naval Operations called the presence of the Neutrality Patrol “a deterrent against embarrassing situations which might come within our waters.”

Admiral Stark spearheaded the drive for “Two Ocean Navy” legislation, that passed Congress in July 1940. The Naval Expansion Act provided more than 1.3 million tons of new construction, including Essex-class carriers, Iowa-class battleships, Cleveland- and Baltimore- classes light and heavy cruisers, submarines, Fletcher-class destroyers, plus auxiliaries, and escort vessels. Considerable time would, of course, be required before the tonnage authorized by this act actually became available. However, the active fleet was markedly strengthened when battleships USS North Carolina and USS Washington and aircraft carrier USS Hornet were commissioned in 1941.

World War I duty with Admiral William S. Sims in London had impressed upon Admiral Stark the vital nature of early planning for coordination between the U.S. and Royal navies. Accordingly in mid-1940, the Chief of Naval Operations sent Rear Admiral Robert L. Ghormley to England for informal conversations with British naval authorities. This was a move toward a 1941 series of secret Anglo-American staff planning sessions from which emerged agreements on major strategy and combined operations.

The Chief of Naval Operations prepared a perceptive national strategy evaluation that he presented to Secretary of the Navy Dudley W. Knox in November 1940. Admiral Stark recognized that Japan’s aggressive expansion threatened vital national interests in the Pacific, but he reasoned that Nazi Germany represented the gravest danger to American security. Therefore, he held that the right course would be an initial offensive strategy in the Atlantic and defensive in the Pacific if the United States entered the war.

The U.S. Navy, in addition to Neutrality Patrol Operations, undertook limited convoys of merchantmen carrying lend-lease materials and implemented the “Destroyers for Bases” agreement, which aided Britain’s battle against German U-boats and provided
the United States with a chain of bases in the Atlantic for hemisphere defense. This was the “short of war” period that ended abruptly when the Japanese attacked Pearl Harbor on December 7, 1941.

Following President Roosevelt’s decision to have one officer serve as wartime Chief of Naval Operations and Commander in Chief, U.S. Fleet, Admiral Stark was relieved by Admiral King as CNO. Admiral Stark remained on active duty as Commander, U.S. Naval Forces, Europe, with headquarters in England, from April 1942, until the end of World War II. His command embraced all U.S. naval forces assigned to British waters and in the Atlantic coastal waters of Europe.

Harold Rainsford Stark was born in Wilkes Barre, Pennsylvania, on November 12, 1880. He entered the U.S. Naval Academy in 1899 and graduated with the class of 1903. He was the first twentieth-century graduate of the academy to become Chief of Naval Operations.

While on duty in the battleship USS Minnesota, Stark made the “Great White Fleet” cruise around the world, 1907–1909. During the next six years, he commanded four different destroyers and was engineering officer of the cruiser USS Brooklyn.

He went to the Torpedo Station, Newport, Rhode Island, in 1915 and, in June 1917, shortly after the United States’ entry into World War I, he took command of Torpedo Flotilla, Asiatic Fleet. He steamed his small destroyers in record time from the Philippines to the Mediterranean, where he took an active part in the antisubmarine campaign. Stark was detached in November 1917 to join Admiral Sims’ staff in London.

Duty in battleships, on major fleet staffs, at ordnance activities, and command at sea and as a Naval War College student
were Stark’s assignments in the decade after World War I. He then served as Aide to Secretaries of the Navy Charles F. Adams and Claude A. Swanson. A year commanding USS West Virginia was followed by assignment as Chief of the Bureau of Ordnance in 1934 with the rank of rear admiral. Returning to sea duty in 1937, Admiral Stark was Commander, Cruisers, Battle Force, with his flag in USS Honolulu, when chosen to succeed Admiral Leahy as Chief of Naval Operations.

Admiral Stark was placed on the retired list as of April 1, 1946. He died at his Washington, DC, home on August 20, 1972, and is buried in Arlington National Cemetery.