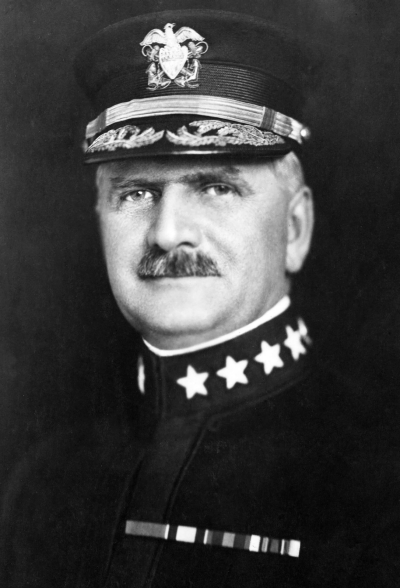 The immediate post-World War I years were dominated by headlong demobilization of the armed forces, a mood of stringent economy in government, and the search for a lasting peace through disarmament and international agreements to limit naval armaments. Against this background, Admiral Coontz was confronted with the problem of retaining the Navy at a ship and manning level sufficient to assure safeguarding national defense and interests.

Initially directing attention to the shore establishment, the Chief of Naval Operations made personal inspection tours to obtain information “as to what station complements could be reduced, which station could be closed down and possibly sold, and what other property could be transferred or disposed of.” Admiral Coontz and other staff officers joined with Assistant Secretary of the Navy Theodore Roosevelt Jr. to outline the United States’ position at the Washington Naval Conference of 1921–1922. The Chief of Naval Operations was an advisor to the American delegation. A capital ship ratio of 5:5:3 among Great Britain, the United States, and Japan was agreed upon by the conference. Admiral Coontz argued that such a ratio was meaningless unless the U.S. Navy was maintained at treaty strength.

It was on the premise of treaty strength that he stood in firm opposition to drastic cuts in naval appropriation by Congress following the Washington Conference. “Men fight, not ships,” was the expressed conviction of the Chief of Naval Operations, “Just because a nation has hundreds of thousand[s] of tons of naval vessels tied up in navy yards does not mean that the ratio is being maintained when compared to another navy of equal tonnage which is fully manned and highly trained.” He was instrumental in winning Congressional approval for an enlisted strength of 86,000 men and money for improvements at West Coast and Pearl Harbor navy yards.

The Naval Research Laboratory, destined to achieve worldwide renown, became operational July 2, 1923. Naval aviation that had come of age in World War I combat moved ahead during Admiral Coontz’s term as Chief of Naval Operations. The Bureau of Aeronautics was created in 1921, and the following year USS Langley, the Navy’s first aircraft carrier, was commissioned. Admiral Coontz sponsored conversion of two uncompleted battle cruisers to aircraft carriers. They became USS Lexington and USS Saratoga and would be called upon to play historic roles in World War II, 20 years later.

Robert Edward Coontz was born in Hannibal, Missouri, on June 11, 1864. He entered the Naval Academy from that state and graduated in the class of 1885. Ensign Coontz        served in the gunboat USS Pinta for nearly six years in Alaskan waters. The Spanish-American War found him on board USS Charleston, which participated in the capture of Guam and the final bombardment of Manila.

Coontz was executive officer of USS Nebraska and made the cruise around the world with the “Great White Fleet.” In 1909
he reported to the Naval Academy as Commandant of Midshipmen. Shore duty in Washington, DC, on the Board of Inspection and Survey was followed by assignment as Naval Governor of Guam in 1912. Coontz commanded the battleship USS Georgia from December 1913 until mid-1915 when he became Commandant, Navy Yard, Puget Sound. He was commanding Battleship Division Six, U.S. Pacific Fleet, when named as Chief of Naval Operations.

After his four years in that office, Admiral Coontz became Commander in Chief, U.S. Fleet and later Commandant, Fifth Naval District. He retired on June 11, 1928, and died at Puget Sound Naval Hospital on January 26, 1935. Burial was in Hannibal, Missouri.