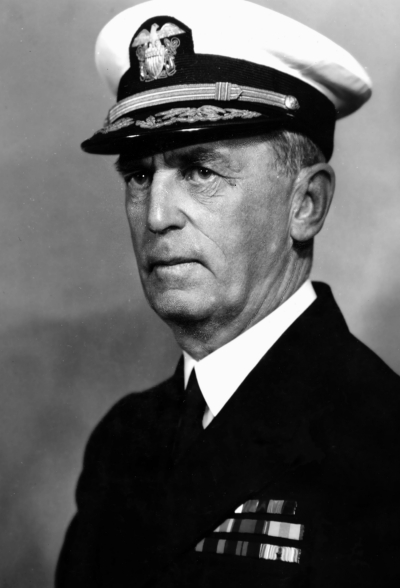 Admiral Leahy entered upon his duties as Chief of Naval Operations at a point when the international scene and the outlook for peace were deteriorating rapidly
in Europe and Asia. During his first year in office, an acute crisis was created when Japanese aircraft sank the gunboat USS Panay in China’s Yangtze River.

The Chief of Naval Operations faced the urgent requirement of preparing the Navy for large-scale combat action should the nation become enmeshed in a global war. He pressed relentlessly for increased naval strength to meet the mounting threat. His vigorous support resulted in the Naval Appropriation Act of 1938. This legislation upped authorized tonnage by 20 percent and fixed the number of naval aircraft at no fewer than 3,000. Funds for the aircraft carrier USS Hornet and South Dakota-class battleships were also provided.

The serious lag in base development was of particular concern to Admiral Leahy. Under his guidance, the Hepburn Board conducted a detailed study of base requirements. Although unable to implement the board’s recommendations fully, the Chief of Naval Operations obtained a Congressional appropriation of $65 million for 15 air bases extending from Kodiak to Palmyra Island in the Pacific, and from San Juan, Puerto Rico, to Quonset Point, Rhode Island, in the Atlantic.

Upon completion of his term as Chief of Naval Operations, Admiral Leahy was placed on the retired list. However, the illustrious career of this distinguished officer was far from finished. He was Governor of Puerto Rico from September 1939 until November 1940 when he became U.S. Ambassador to France. Admiral Leahy held this difficult diplomatic post in Vichy for more than two years. President Franklin D. Roosevelt, acting in his capacity as Commander in Chief, returned Leahy to active duty and named him his Chief of Staff in July 1942. The Admiral presided over meetings of the Joint Chiefs of Staff, as well as the Allied Combined Chiefs of Staff when the United States was host country. As a senior adviser, he accompanied the President to all the historic wartime international meetings. Leahy was promoted to five star fleet admiral rank on December 15, 1944.

President Harry S. Truman accepted Fleet Admiral Leahy’s resignation as Chief of Staff on March 2, 1949, but like all five star fleet admirals, he remained on active duty in an advisory capacity to the Secretary of the Navy.

William Daniel Leahy was born on May 6, 1875, in Hampton, Iowa. His 1897 Naval Academy class graduated in time to see active Spanish-American War service. Leahy was in the USS Oregon when she made her celebrated speed dash from the West Coast around Cape Horn to take part in the decisive battle off Santiago, Cuba. Returning to the Pacific, he took part in the operations to suppress the Philippine Insurrection and the Boxer Rebellion in China. Leahy was an instructor in the Department of Physics and Chemistry at the Naval Academy for his first shore duty from 1907 to 1909. Sea assignments as navigator and ordnance officer followed the Naval Academy tour. Late in 1912 he was ordered to Washington, DC, as Assistant Director of Gunnery Practice and Engineering Competitions.

World War I duty for Leahy was as executive officer of USS Nevada and Commanding Officer of a troop transport. The postwar years found him filling a broad spectrum of ship and shore assignments with emphasis on ordnance duties. He took command of USS New Mexico in June 1926 and 16 months later was appointed Chief of the Bureau of Ordnance. On another Washington, DC, tour from 1933 to 1935, he was Chief of the Bureau of Navigation. Admiral Leahy was Commander in Chief, Battle Force, flying his four star flag on USS California, when appointed Chief of Naval Operations.

Fleet Admiral Leahy died at the Naval Hospital Bethesda, Maryland, on July 20, 1959. He is buried in Arlington National Cemetery.