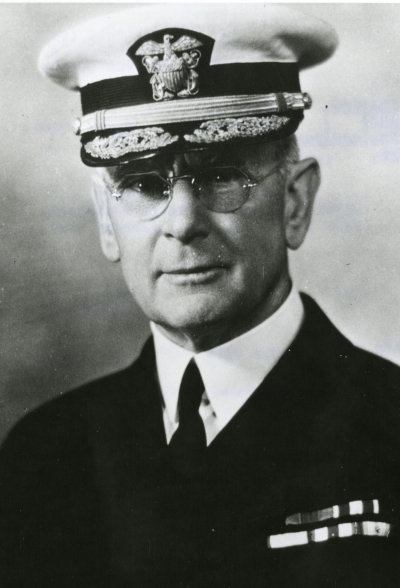 These were years in which the clouds of impending conflict were thickening over Europe and Asia and which witnessed political upheaval in Cuba, requiring the presence of U.S. Navy ships in the Caribbean.

The readiness and efficiency of the Navy were critically hampered by deep personnel reductions imposed since the outset of the economic depression. Meeting with President Franklin D. Roosevelt several days before reporting as Chief of Naval Operations, Admiral Standley stated frankly, “Mr. President, to operate our fleet on this basis is unfair to the American people. They think they have a fleet in being. In reality, it is a phantom fleet.” He advised that the Navy was short some 30,000 enlisted men and requested an immediate increase in naval personnel. “If we do not get it, I am going to recommend that we lay up enough ships so that the ones we do operate will be effective fighting units of a smaller Fleet ready for action on a moment’s notice.” Admiral Standley’s solid argument prevailed and the downward trend was reversed during his term as Chief of Naval Operations. The Fleet Marine Force was established December 7, 1933.

To meet the needs of the constant technological changes inherent in a modern fleet, Admiral Standley staunchly advocated adopting a regular schedule of ship replacement. The system evolved would thus prevent vessels from becoming obsolete en masse. Shortly after his 1933 inauguration, President Roosevelt allocated public works funds amounting to $238 million to proceed with the building of some 32 naval vessels of varying types. Following this impetus, the Chief of Naval Operations and his staff took the leading role in drafting a bill to enable the Navy to build to full strength allowable under the Washington and London naval treaties. Championed by Congressman Carl Vinson and Senator Park Trammell, the Vinson-Trammell Act became law on March 27, 1934, and was a major step toward providing the nucleus of the Navy that would have to fight in World War II. A working plan was devised that provided for annual building programs designed to bring the U.S. Navy to treaty strength by 1942 and to ensure replacement of overage tonnage.

Illness forced Secretary of the Navy Claude Swanson to be frequently absent from the Department, and Admiral Standley often bore the added responsibility of performing the duties of the Secretary’s office. The Chief of Naval Operations was also a delegate to the second London Naval Conference in 1935–1936.

William Harrison Standley was born in Ukiah, California, on December 18, 1872. After graduation from the U.S. Naval Academy in 1895, he was ordered to USS Olympia. He had Spanish-American War service in the monitor USS Monterey and was in the gunboat USS Yorktown during the Philippine Insurrection. Standley’s varied tours afloat, including command, for the next 16 years were broken by assignment ashore at Tutuila, Samoa, to serve as Captain of the Yard, Chief Customs Officer, and Commander of the Native Guard. He was ordered to the Naval Academy in 1916 where he supervised construction of the new seamanship and navigation buildings and the enlargement of Bancroft Hall. A year in command of USS Virginia preceded attendance at the Naval War College and staff duty with the Battle Fleet.

In 1923 he reported to the Office of the Chief of Naval Operations as Head of the War Plans Division. He took command of the battleship USS California on February 15, 1926.

Admiral Standley retired on January 1, 1937, but was recalled to active duty on February 13, 1941, and served on a number of boards and commissions. In the historic tradition of the naval officer diplomat, Admiral Standley was U.S. Ambassador to the Soviet Union from February 1942 to October 1943. He was again relieved of all active duty on August 31, 1945.

Admiral Standley died in San Diego, California, on October 25, 1963. He is buried in Arlington National Cemetery.