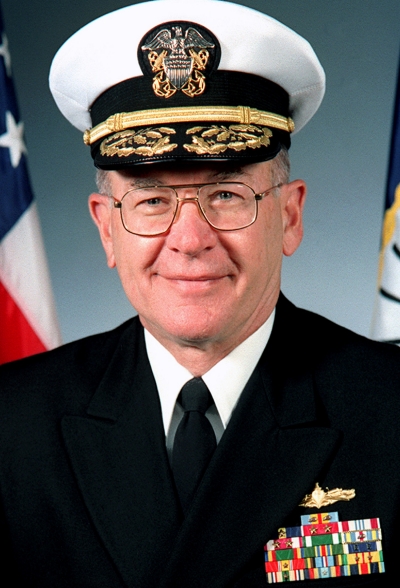 Admiral Clark had been Chief of Naval Operations only two months when a terrorist suicide attack blasted a hole into the side of guided-missile destroyer USS Cole while the ship was harbored at a Yemen port on October 12, 2000. As the Navy adapted to an enemy with neither geographic borders nor moral boundaries, the September 11, 2001, attacks further signified that the battlespace had changed. American Airlines Flight 77 slammed into the Pentagon just yards from the CNO’s office. Admiral Clark would spend the remainder of his time as CNO shaping the Navy to fight a war against terrorism.

Under his guidance, the Navy was at the forefront during Operations Enduring Freedom (OEF) and Iraqi Freedom (OIF). In OEF, the Navy outfitted the USS Kitty Hawk with a contingent of special forces from which a meaningful land campaign could be launched and sustained. In OIF, five carrier strike groups deployed in simultaneous support of major combat operations in the war. The Navy also operated closer to the home front while supporting Homeland Security’s Noble Eagle response following the 9/11 attacks.

To counter the risk of regional and widespread terrorism, Admiral Clark stressed that the Navy “must expand its striking power, achieve information dominance, and develop transformational ways of fulfilling our enduring missions of sea control, power projection, strategic deterrence, strategic sealift and forward presence.” He would achieve that with his innovative strategic plan, “Seapower 21,” which utilized three fundamental concepts: Sea Strike, Sea Shield, and Sea Basing. These elements would revamp the Navy into a more cost-efficient, strategically defensive, and effective service. Admiral Clark stated, “Bringing the fight to our enemies is our mission. Transforming ourselves and our great institution for the dangerous decades ahead is our imperative. Our task: Prevail today while bridging to a successful future.”

Warfare had become anything but predictable, so he sought to improve flexibility of the ship maintenance schedules that rendered non-deployable significant portions of the fleet. His Fleet Response Plan brought major change to the means by which ships were maintained. His other innovations included standing up the Expeditionary Strike Group Command for fast action overseas. Admiral Clark recognized that “speed is not just about how fast your ships or airplanes go, it also is about how responsive and agile your organizations are.”

Through his tenure as CNO, Admiral Clark remained focused on his top five priorities: manpower, current readiness, future readiness, quality of service, and alignment. That included a shift from a planned maintenance system to one based more on the readiness condition of the ship in order to maintain operational readiness. “It’s critical to mission accomplishment,” explained Admiral Clark, “If our fleets, staffs and various systems are in alignment, we can more effectively accomplish our primary mission and that’s victory in combat.”

As the first CNO to face budget constraints following 9/11, Admiral Clark applied business tactics to reorganize the Navy into a more efficient and productive military branch. He proposed cutting the number of military personnel in order to reallocate the funding to purchase more ships. To balance the impact of this policy, he promoted the education of current staff. In order to increase retention of naval service members he implemented a personnel plan that enabled Sailors to develop their own career paths. The Navy expanded educational opportunities for Sailors with internet-based courses afloat as well as traditional opportunities like the Program Afloat for College Education (PACE). Admiral Clark credited the Navy’s personnel with making “ours the greatest Navy ever to sail the world’s oceans; our ability to attract, train, and retain them is a testament to the health of our service and an indicator of our proper heading as we chart our course into the twenty-first century.”

Admiral Clark retired many ships during his time as Chief of Naval Operations. Innovations in systems maintenance and a reduction in the number of personnel required to serve on active ships further cut operational costs across the fleet. While Admiral Clark served as CNO, the Navy purchased ships on an installment plan rather than paid in full, which made available additional money for personnel retention and educational training. “At the heart of everything good that is happening in our Navy today is the vital fact that we are winning the battle for people. We are attracting, developing, and retaining a talented cadre of professionals who have chosen a life of service. Our ability to challenge them with meaningful, satisfying work that lets them make a difference is fundamental to our covenant with them as leaders,” Admiral Clark testified before the House Appropriations Committee in March 2005.

He retired a few months later on July 22, 2005, the longest serving CNO since Admiral Arleigh Burke.

Vernon E. Clark was born in Sioux City, Iowa. A graduate of Evangel College, Clark continued his education to earn a master of business administration from the University of Arkansas. Afterward, he attended Officer Candidate School and received his commission in August 1968.