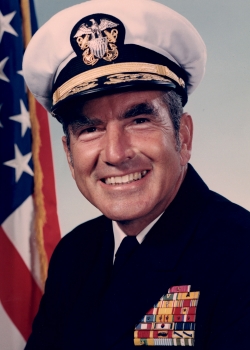 Learn about the Legacy of Admiral Zumwalt

When he was tapped as Chief of Naval Operations at 49 years old, Admiral Zumwalt became the youngest officer ever named to the post. His tour was one of sweeping changes within the Navy. Entering office as defense spending declined and with a steadily aging fleet, he saw it as his job to ensure the Navy remained capable of meeting the Soviet threat. That included a program of retiring, sometimes ahead of schedule, obsolete fleet forces, in order to improve capability and maintenance elsewhere. He had to do so while enabling an overextended Navy to continue to meet mission requirements, acquire affordable equipment, and ensure lifecycle costs made it possible to adequately man, train, equip, and maintain the force. The result was a number of new programs that had lasting impacts on the warfighting readiness of the Navy.

The Oliver Hazard Perry-class guided missile frigate (FFG) was designed to provide commanders with increased capability at a reduced cost. With Admiral Zumwalt’s support, the program produced 51 FFGs for the U.S. Navy. They served the U.S. Navy for 38 years, from 1977 through 2015, and more than 20 of the American ships went on to serve in the navies of Bahrain, Egypt, Poland, Pakistan, and Turkey. The class was described by former Secretary of the Navy John F. Lehman Jr. as “one of the most successful shipbuilding programs in the Navy’s postwar history.”

By the time Admiral Zumwalt became CNO, the Navy was no longer building fleet ballistic missile submarines (SSBN). The newest of the original “41 for Freedom” SSBNs was commissioned three years earlier and ongoing strategic arms limitations talks, if ratified, would prevent modernization of the aging SSBN fleet. Admiral Zumwalt saw this as a threat to the future readiness of this important element of the nation’s strategic deterrent and put his support behind the design and construction of a new, more capable class of SSBN. The Ohio-class submarines were an evolutionary leap ahead of their predecessors, designed specifically for extended patrols, stealth, and increased accuracy and range of weapons. Thirty five years after Ohio was commissioned in 1981, all 18 of the boats in the class remained in service.

Admiral Zumwalt also championed the F-14 Tomcat as the Navy’s replacement for the F-4 Phantom. Admiral Zumwalt sold a reluctant Congress on the F-14 with calculations comparing a 13-carrier force carrying 301 F-14s to a 16-carrier force carrying 903 of the old F-4s. The smaller force, he said, was “militarily more effective; $2.5 billion cheaper in procurement costs; $500 million a year cheaper in operating costs and requiring 17,000 fewer Sailors.” The F-14 served in the U.S. Navy for more than 30 years from 1974 to 2006.

Admiral Zumwalt believed it was his job to “modernize and humanize the Navy,” yet he is especially remembered for his progressive personnel programs. To articulate his position on the changes he planned, Admiral Zumwalt implemented a series of naval messages given the moniker “Z-grams.” The first Z-gram was released the day he took office. A torrent of the missives followed (the first 92 of a total of 120 came out in his first year in office). They addressed personnel matters that Admiral Zumwalt described as “Mickey Mouse” issues that he believed were partially responsible for plummeting retention of a force attained through the draft. Reversing that trend was one of his top priorities. On November 10, 1970, he released Z-57. In it, he advised the fleet he intended to rid the Navy of demeaning or abrasive regulations, singling out one issue in particular: fashion. “I will not countenance the rights or privileges of any officers or enlisted men being abrogated in any way because they choose to grow sideburns or neatly trimmed beards or moustaches or because preferences in neat clothing styles are at variance with the taste of their seniors.”

But not all the Z-grams dealt with “Mickey Mouse” issues—some were the foundation of policies that remain in effect today. During Admiral Zumwalt’s term as CNO, the Navy, like the nation, experienced racial unrest. In Z-66 dated December 17, 1970, Admiral Zumwalt noted “there is significant discrimination in the Navy.” However, he didn’t shrink from it. “We do have problems, and it is my intention . . . to take prompt steps toward their solution.” He directed each command to appoint a special assistant for minority affairs with direct access to the commanding officer, and for commanders to ensure a minority group wife was included in the ombudsman program. He also directed the Naval Supply Systems Command to renew emphasis on meeting the special needs of minority groups in ships’ stores and other service organizations. He understood this was just the beginning and committed to further study and action. To emphasize his determination, he gave commanders until January 15, 1971—less than a month—to take action on the directives. He wrapped up the Z-gram saying, “There is no black Navy, no white Navy—just one Navy—the United States Navy.” Minority firsts in the Navy in the succeeding years can trace their roots to Z-gram 66.

Another Z-gram that has become a milestone for equality in the Navy is Z-116: Equal Rights and Opportunities for Women in the Navy. Like Z-66, Z-116 began the process of more fully integrating women into the Navy. Admiral Zumwalt not only believed the Navy could do better in the fair treatment of women, but he also saw women as “a vital personnel resource” in the early days of the all-volunteer force. Among other things, Z-116 opened ratings to enlisted women, established a pathway for women to be assigned to ships, and opened all staff corps and restricted line communities to women.

Elmo Russell Zumwalt Jr. was born in San Francisco, California. He was appointed to the U.S. Naval Academy in 1939, graduating in 1942, a year early, due to World War II. His early sea tours included service aboard four destroyers and USS Wisconsin. He commanded USS Tills, USS Arnold J. Isbell, USS Dewey, Cruiser-Destroyer Flotilla Seven, and Naval Forces, Vietnam. He served ashore in a number of important billets on the staffs of the Secretary of the Navy and the Chief of Naval Operations. President Richard M. Nixon nominated him as CNO, and he took office on July 1, 1970, retiring on the same date in 1974. Admiral Zumwalt died January 2, 2000, at the age of 79. “At a time when morale and enthusiasm were at an all-time low, he had the vision to see a great future for the Navy,” said President William J. Clinton during a memorial service for Admiral Zumwalt. “The changes he brought about three decades ago will continue to shape the character and culture of our Navy for a long time in the 21st century.”