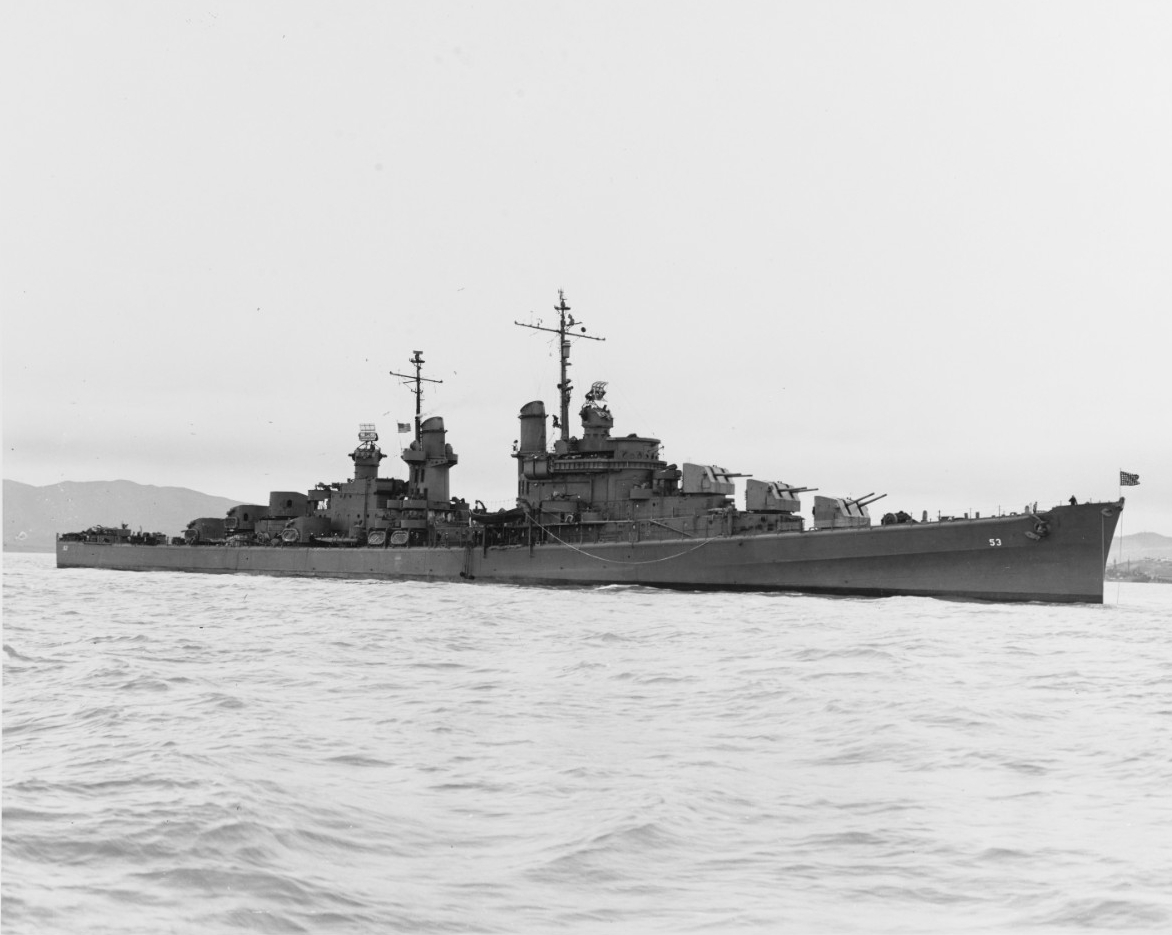 Antiaircraft light cruiser USS San Diego (CL-53) was commissioned on 10 January 1942 with Captain Benjamin F. Perry in command. After shakedown in the Chesapeake Bay, San Diego set sail for the U.S. west coast—via the Panama Canal—and arrived at her southern California namesake city on 16 May 1942. On 15 June, she began escort duty for USS Hornet (CV-8) in the South Pacific, and in early August, San Diego participated in the first American offensive effort of the war—the invasion of the Solomons at Guadalcanal. The powerful Imperial Japanese Navy fiercely contested the Allied thrust into the Solomons causing heavy damage on American ships. San Diego was witness to the sinking of USS Wasp (CV-7) on 15 September and of Hornet on 26 October. In addition, the ship provided antiaircraft support to USS Enterprise (CV-6) during the Naval Battle of Guadalcanal from 12–15 November. After several months battling the Japanese in the dangerous waters of the Solomons, San Diego steamed to Auckland, New Zealand, for replenishment.

The following year in early November, San Diego joined aircraft carrier USS Saratoga (CV-3) and HMS Victorious in support of the invasion of Bougainville, and then, from 5–11 November, San Diego joined Saratoga and USS Princeton (CVL-23) in the highly successful raids on Rabaul. She also participated in late November in the capture of Tarawa in the Gilbert Islands. In early December, San Diego escorted USS Lexington (CV-16) that had been damaged by a torpedo attack to Pearl Harbor, and she continued on to San Francisco for installation of modern radar equipment, a combat information center, and 40 millimeter antiaircraft guns to replace her obsolete 1.1” batteries.

In January 1944, San Diego joined Vice Adm. Marc Mitscher's Fast Carrier Task Force at Pearl Harbor and served as an important part of the force as her updated rapid-fire guns were superb protecting carriers against enemy aerial attacks. From 31 January to 4 March, San Diego participated in Operation Flintlock, the capture of Majuro and Kwajalein, and Operation Catchpole, the invasion of Eniwetok in the Marshall Islands. Also, during this time, Task Force 58 delivered devastating blows on enemy forces in Truk—the Japanese naval base known as the “Gibralter of the Pacific.” After extended combat action, San Diego steamed back to San Francisco for additions to her radar and then she rejoined the carrier force at Majuro to support the raids on Wake and Marcus Islands in June. Later that month, the ship participated in Operation Forager: The Battle of Saipan, the attacks on the Bonn Islands, and fought in the Battle of the Philippine Sea on 19–20 June. After a brief replenishment stop at Eniwetok, San Diego supported the invasion of Guam and Tinian. In early August, she stood by as carriers provided close air support to elements of the 1st Marine Division, who landed on Peleliu, 15 August.

After supporting Task Force 58 in the attacks in the Manila Bay area of operations on 21 September, San Diego joined Task Force 38 for the first strikes on Okinawa. From 12–15 October, as carriers pounded Formosa, San Diego shot down multiple Japanese aircraft in her sector and drove away a multitude of other enemy aircraft. Unfortunately, some of the enemy attackers made it through the American line of defense and damaged USS Houston (CL-81) and USS Canberra (CA-70). San Diego, subsequently, helped escort the two crippled cruisers out of danger to Ulithi. In January 1945, as part of Task Force 38, San Diego entered the South China Sea and participated in attacks on Formosa, Luzon, Indochina, and southern China. On her way to replenishment on Ulithi, San Diego joined again in strikes on Okinawa.

San Diego next participated in diversionary bombardment operations against the Japanese home islands and finished out the month of February with antiaircraft support during the pivotal Battle of Iwo Jima. On 1 March, San Diego and other cruisers detached from the task force to bombard Okino Daijo Island in support of the landings on Okinawa. After another visit to Ulithi, San Diego joined the carrier strikes on Kyushu, again shooting down or driving away enemy aircraft from the carriers. On the night of 27–28 March, she participated in the shelling of Minami Daito Jima, and on 11 April and again on 16 April, San Diego’s guns shot down several attackers. In addition, she provided antiaircraft protection and escort for ships damaged by kamikaze attacks. San Diego continued to support carriers during the Battle of Okinawa until she entered drydock at Guian in the Philippines for repairs and maintenance.

From 19 July until the Japanese surrendered unconditionally on 14 August, San Diego operated off the coast of Japan. On 27 August, San Diego was the first major Allied warship to enter Tokyo Bay and was present when the instrument of surrender was signed by representatives of the Allied and Japanese governments onboard USS Missouri (BB-63). She supported the occupation of the Yokosuka Naval Base and the surrender of Japanese battleship Nagato. After steaming more than 300,000 miles in Pacific waters, she returned to San Francisco on 14 September. San Diego continued to support the post-war effort as part of Operation Magic Carpet that brought thousands of American troops home. San Diego was decommissioned and placed in the Pacific Reserve Fleet on 4 November 1946. More than ten years later, the mighty ship was struck from the Navy list. San Diego received 15 battle stars for her exceptional World War II service. 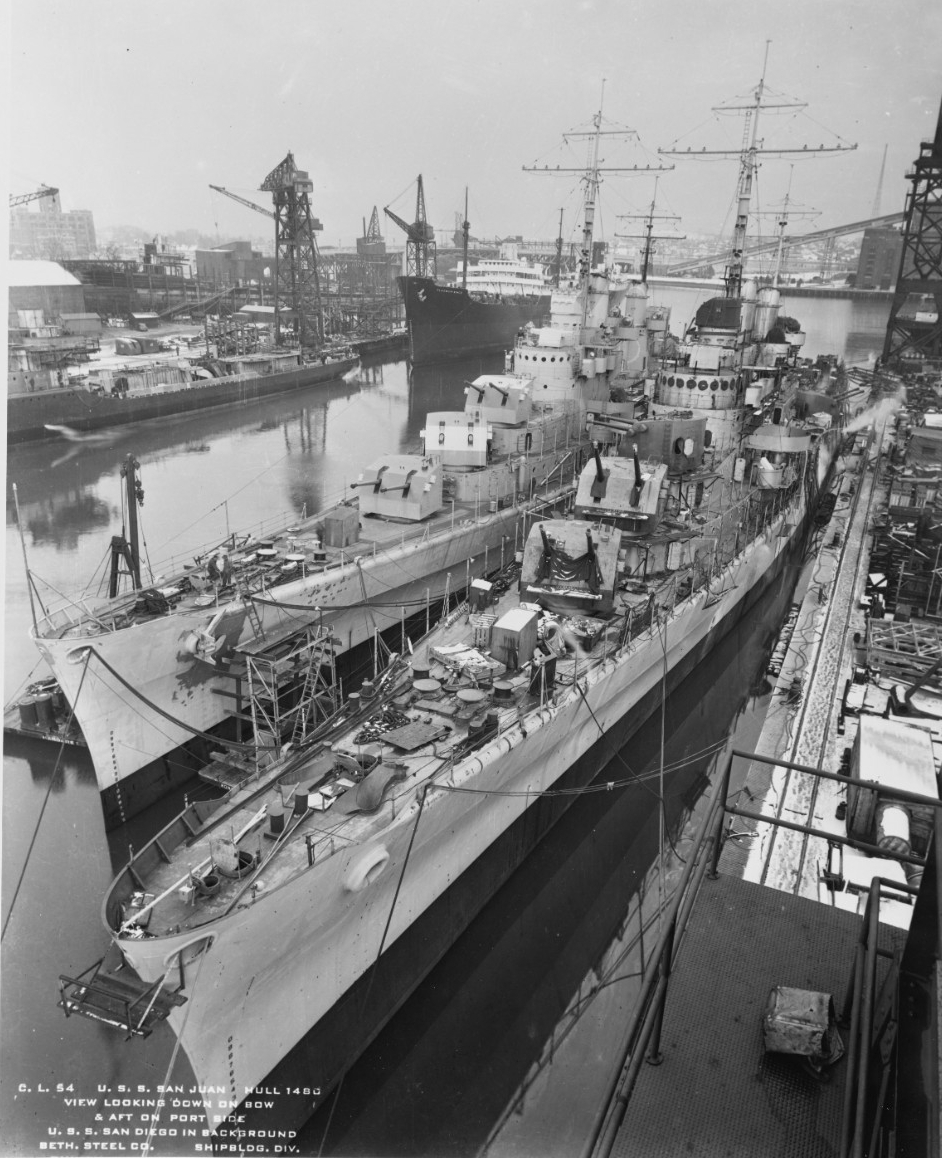 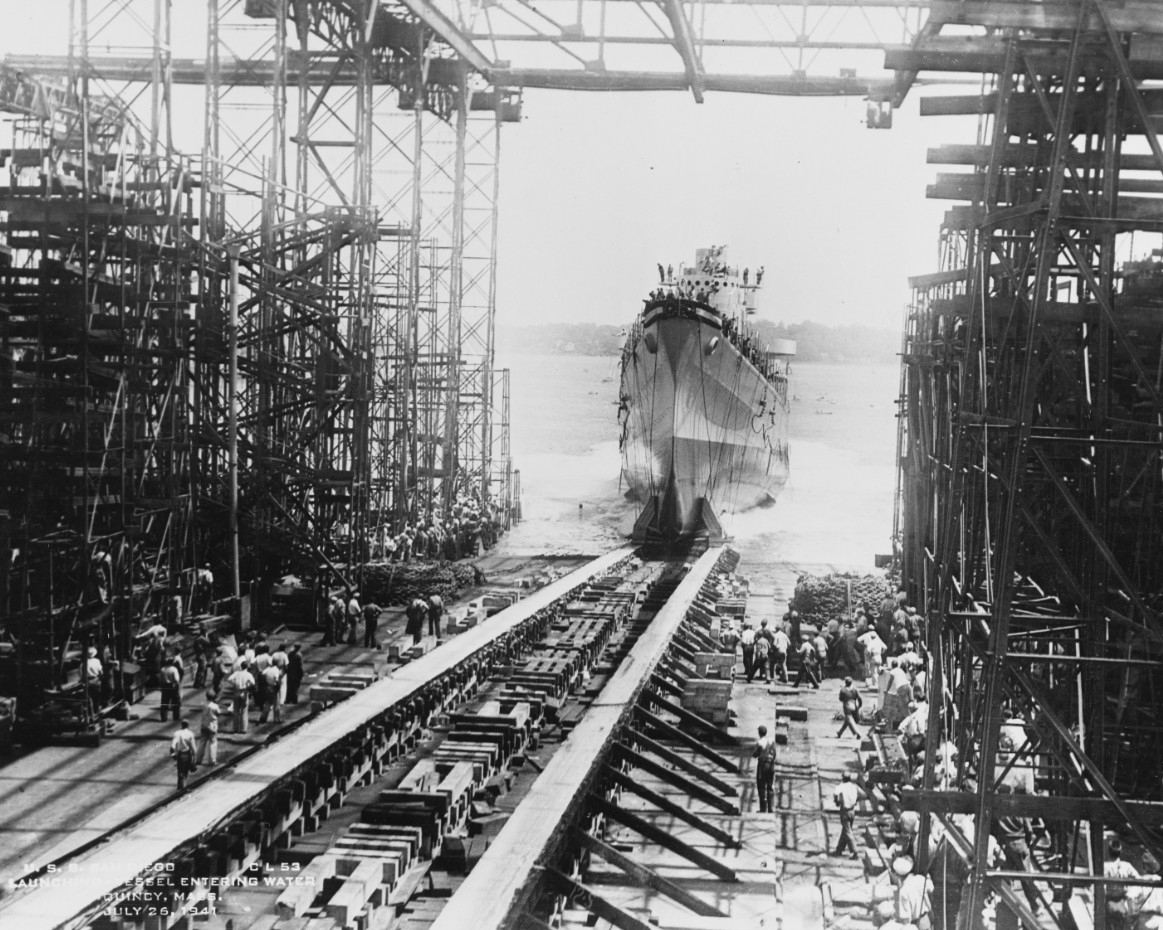 USS San Diego (CL-53) slid down the shipways during her launching at the Bethlehem Steel Company shipyard, Quincy, Massachusetts, 26 July 1941. Photograph from the Bureau of Ships collection in the U.S. National Archives, 19-N-29980. 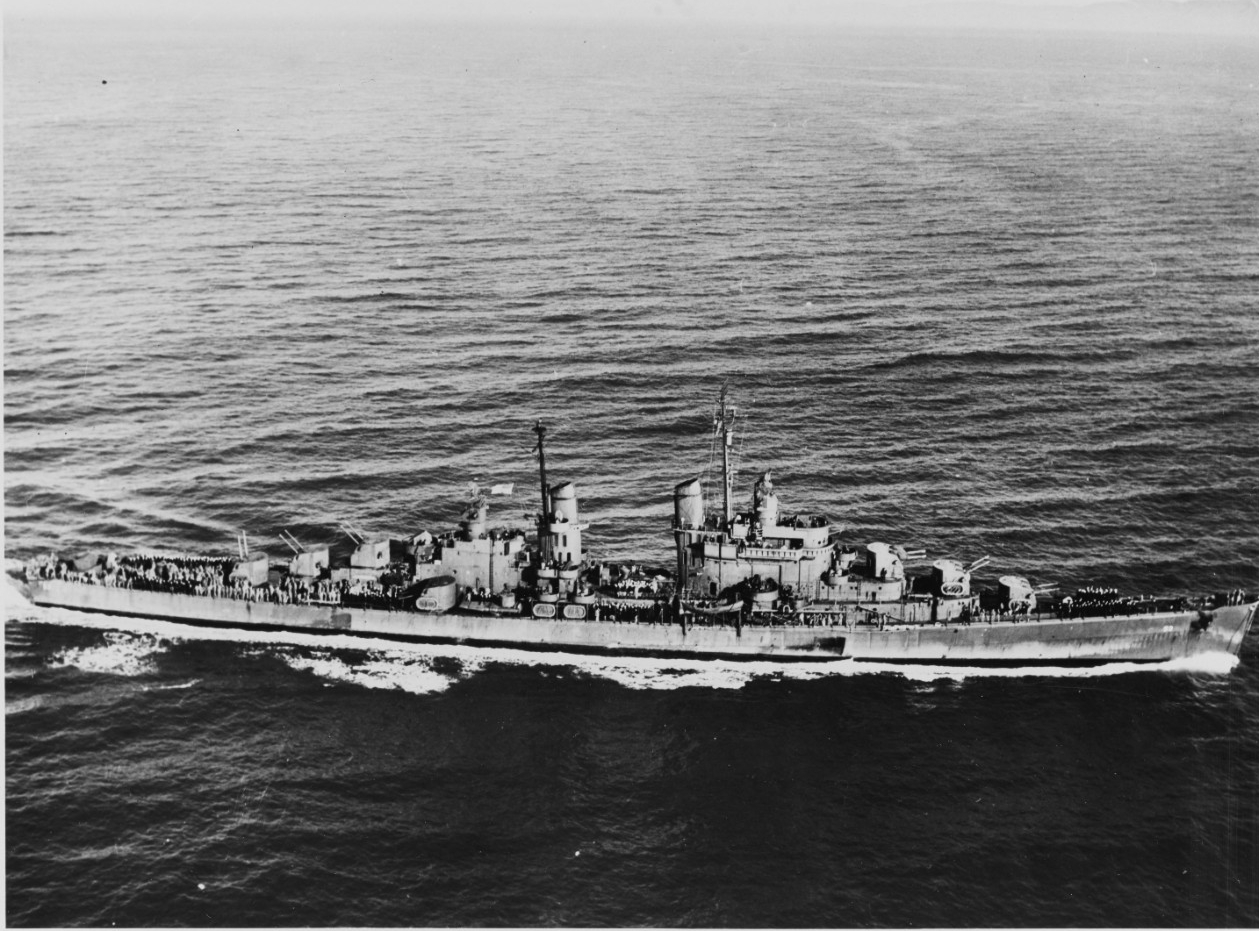 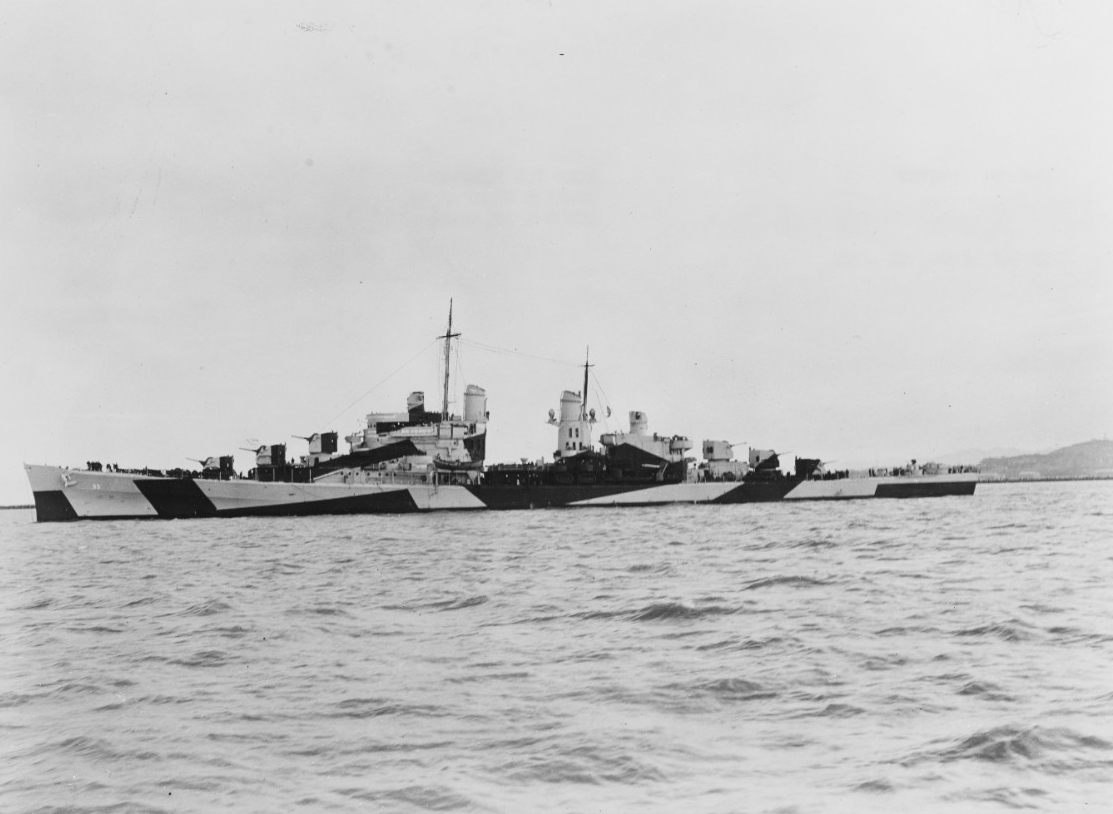 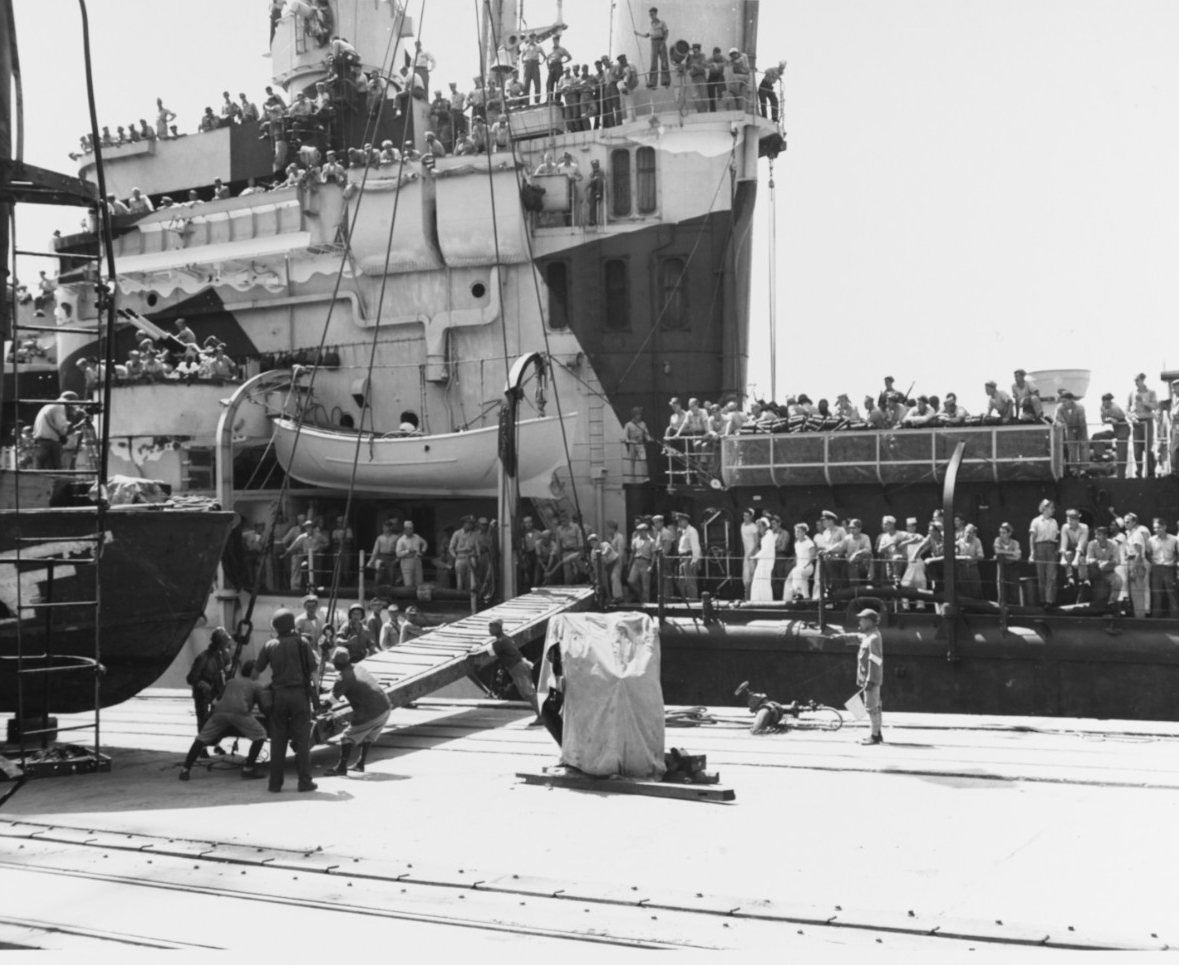 A Japanese working party rigged the gangway as USS San Diego (CL-53) docks at Yokosuka Navy Base, Japan, 30 August 1945, to take part in the U.S. occupation of that facility. Official U.S. Navy photograph now in the collections of the National Archives, 80-G-338387. 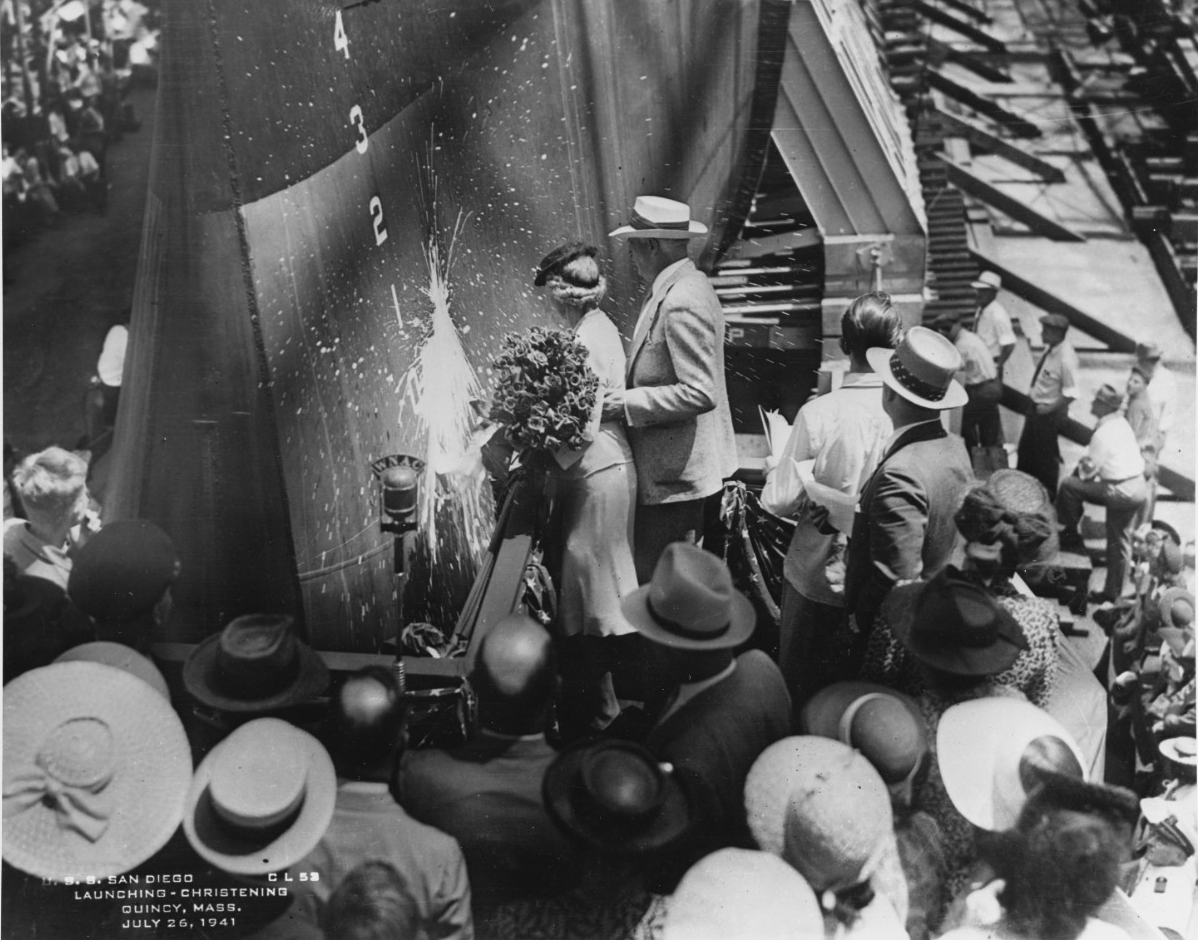 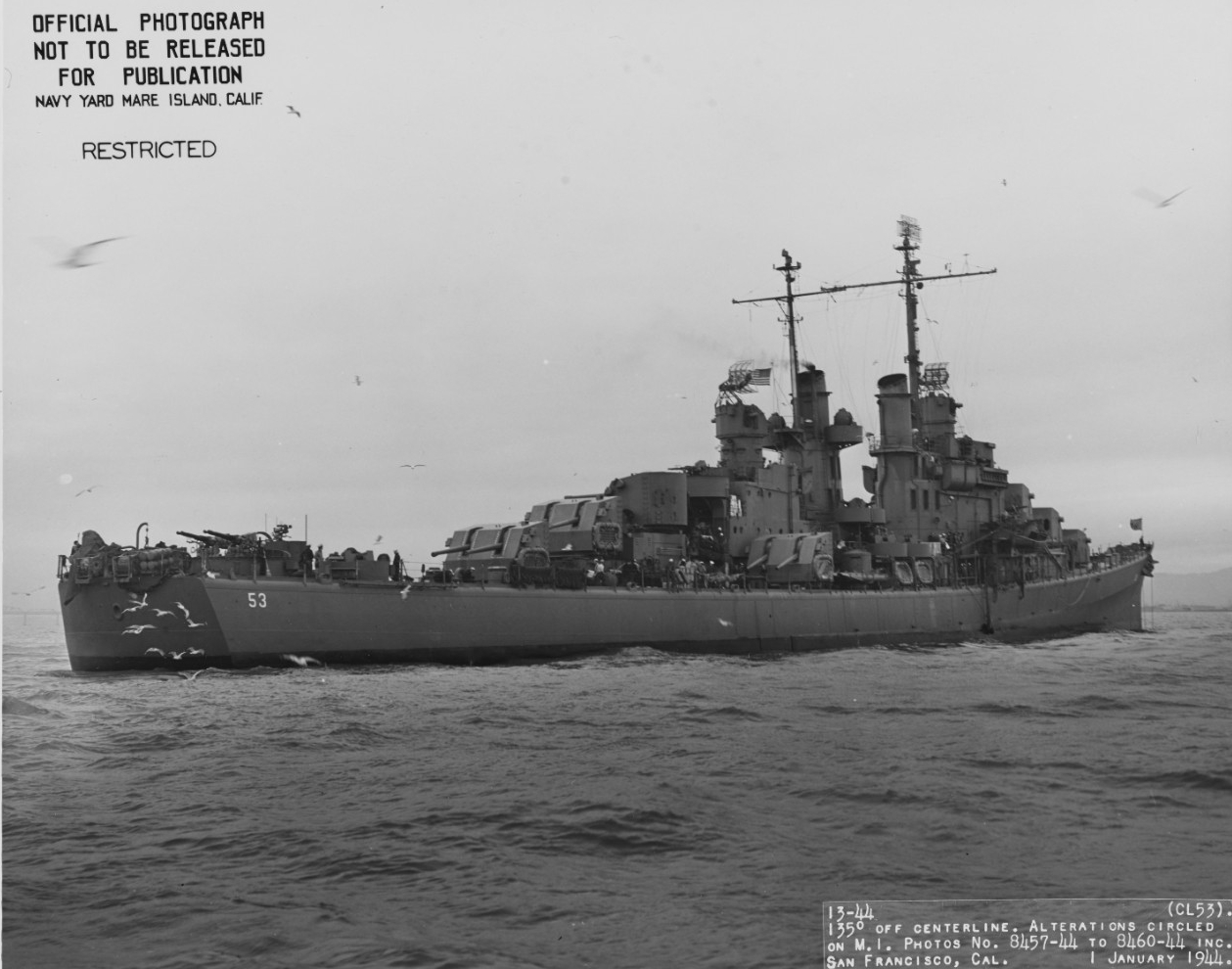 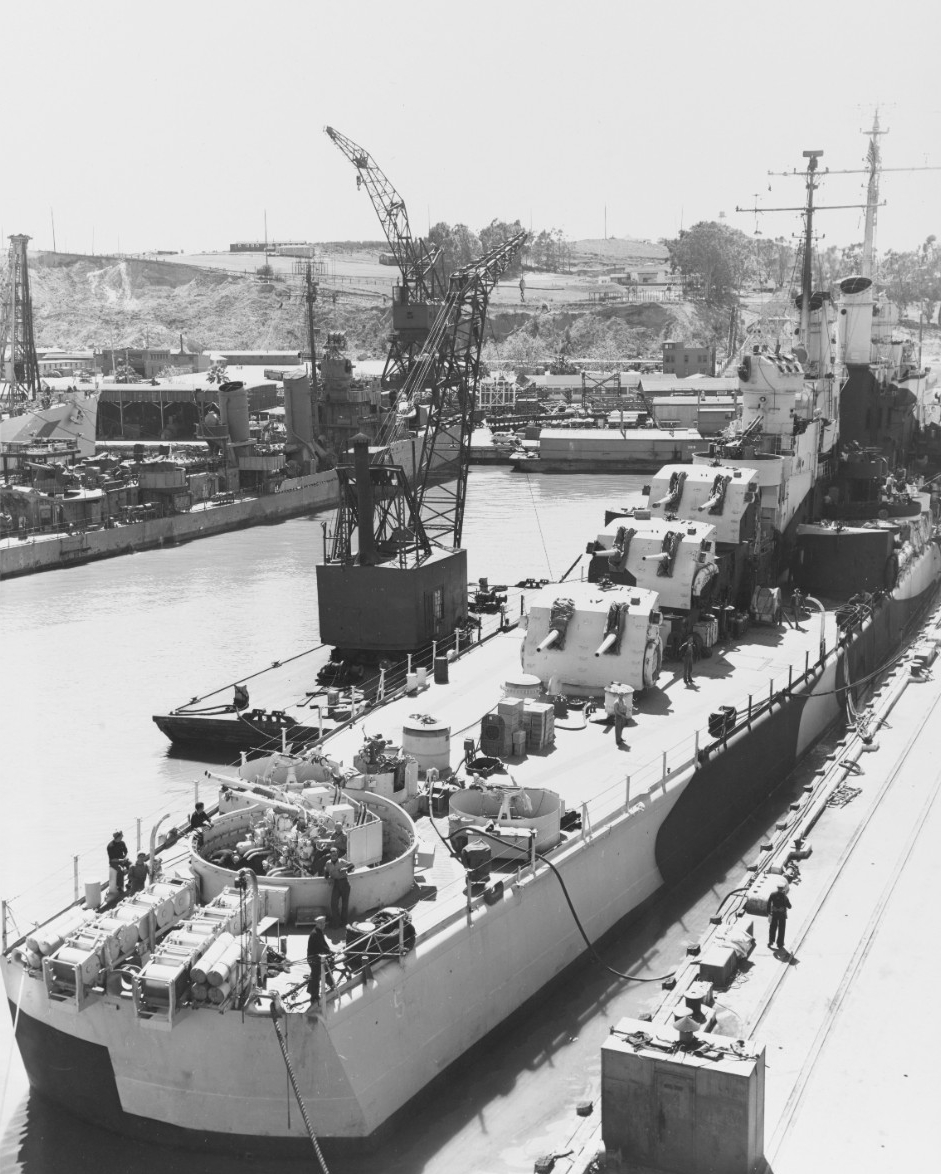 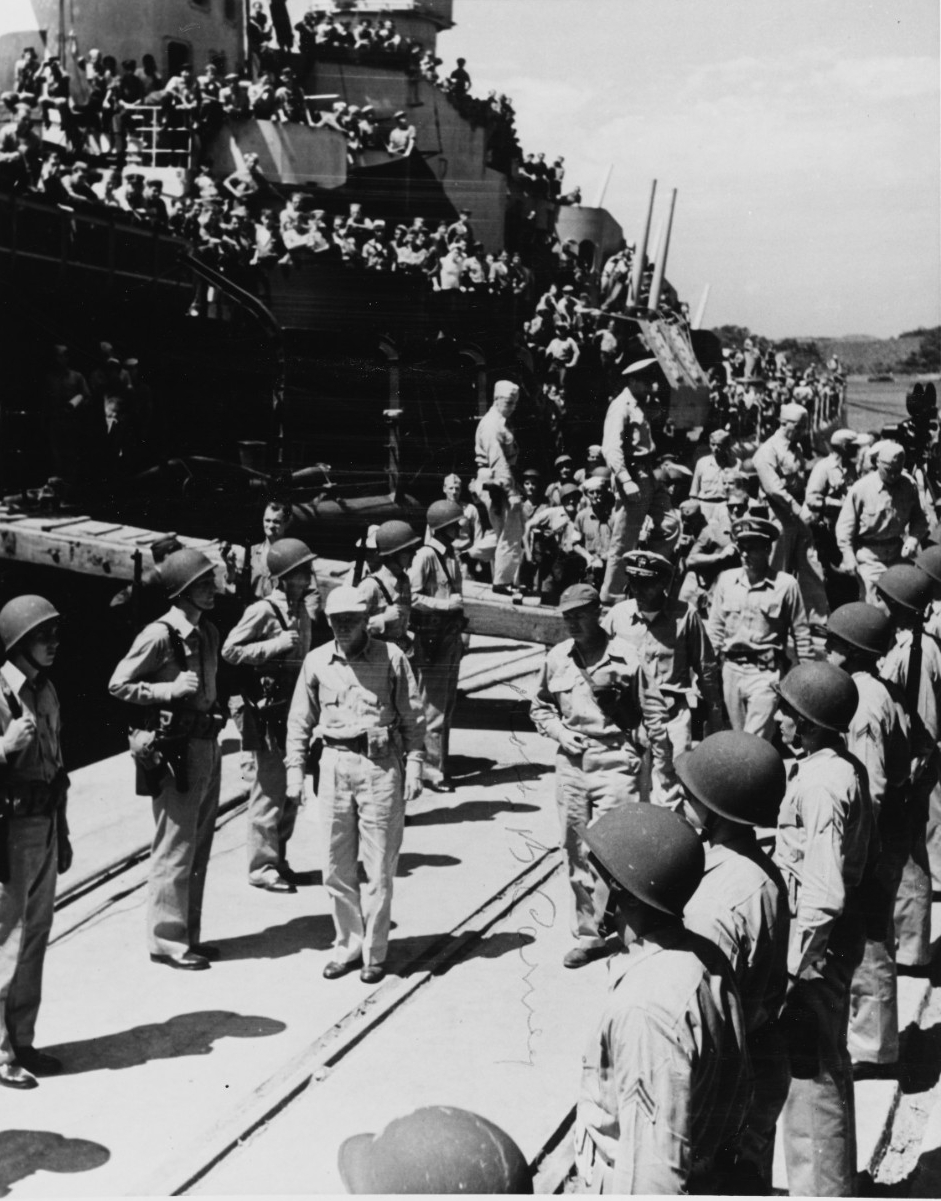 Scene at Yokosuka Naval Base, Japan, where American forces prepared for occupation, 30 August 1945. Having debarked from USS San Diego (CL-53), Rear Admiral Robert B. Carney (near center with shoulder holster) walks along with other officers. Naval History and Heritage Command photograph, NH 124423.