USS Saratoga (CV-3) arrived at Pearl Harbor from the U.S. west coast, 6 June 1942. She departed the following day to join USS Enterprise (CV-6) and USS Hornet (CV-8) near Midway bringing replacement aircraft for those two ships whose air groups had been depleted during the Battle of Midway. Official U.S. Navy photograph now in the collections of the U.S. National Archives, 80-G-10121.

USS Saratoga (CV-3) was commissioned on 16 November 1927 with Captain Harry E. Yarnell in command. The ship was originally to be built as a battle cruiser, but was later authorized to be completed as an aircraft carrier. Saratoga was the U.S. Navy’s first fast carrier. She sailed from Philadelphia, on 6 January 1928, on shakedown and on 11 January, Saratoga’s air officer, Marc A. Mitscher, landed the first aircraft on her flight deck. On 27 January, during an experiment, rigid airship Los Angeles (ZR-3) moored to Saratoga's stern and took on fuel and stores. Later that day, she sailed for the Pacific where she joined the Battle Fleet at San Pedro, California. For the remainder of the decade and throughout the 1930s, Saratoga maintained readiness by participating in multiple fleet exercises in the Pacific, Atlantic, and the Mediterranean.

On 7 December 1941, after the Japanese attacked Pearl Harbor, Saratoga was just entering San Diego from an interim drydocking at Bremerton, Washington. The following day, she hurriedly was underway carrying Marine aircraft intended to reinforce the vulnerable garrison on Wake Island. Saratoga reached Pearl Harbor on 15 December only to refuel, and she then rendezvoused with USS Tangier (AV-8), which had relief troops and supplies onboard, while other U.S. Navy’s aircraft carriers, USS Lexington (CV-2) and USS Enterprise (CV-6), provided distant cover for the operation. However, the Saratoga force was delayed by the low speed of its oiler and the necessity to refuel destroyers. After receiving reports of Japanese carrier aircraft over Wake Island and enemy landings on the island, the relief force was recalled on 22 December. Wake fell into the hands of the Japanese the next day. Saratoga continued to operate in the region of the Hawaiian Islands. On 11 January 1942, while heading towards a rendezvous with Enterprise, 500 miles southwest of Oahu, Saratoga was hit by a deep-running torpedo fired by Japanese submarine I-16. Although six crewmembers were killed and three firerooms were flooded, Saratoga managed to reach Oahu under her own power. After temporary repairs were completed, the ship made way to the Bremerton Navy Yard for permanent repairs and the installation of a modern antiaircraft battery.

On 22 May, Saratoga made way to San Diego where the ship’s air group conducted intensive training. While there, intelligence was received of an impending Japanese assault on Midway, but due to the need to load planes, stores, and to collect escorts, the carrier was unable to sail until 1 June. She arrived at Pearl Harbor on 6 June after the Battle of Midway had ended. After refueling, Saratoga transferred 34 aircraft to USS Hornet (CV-8) and Enterprise to replenish their depleted air groups. The three carriers then made way for the Aleutians, but the operation was cancelled, and Saratoga returned to Pearl Harbor on 13 June.

On 7 July, Saratoga steamed for the southwest Pacific, and in late July, she provided air cover for rehearsals in the Fiji Islands in preparation for landings on Guadalcanal. As the flagship of Rear Admiral Frank J. Fletcher, Saratoga opened the Guadalcanal assault on 7 August providing air cover for the landings for the next two days. Saratoga continued to operate east of the Solomons, protecting the sealanes to the beachhead while awaiting an imminent Japanese naval counterattack. On 24 August, the first contact of enemy carriers was received. Two hours later, Saratoga launched an attack that sent Japanese carrier Ryujo to a watery grave. Later in the afternoon, Saratoga launched aircraft that damaged seaplane tender Chitose. Saratoga, due to cloud cover, was able to escape detection by Japanese aircraft, who had concentrated their attack on Enterprise. The American force fought ferociously and weakened enemy air strength so severely that the Japanese recalled their transports before they reached Guadalcanal. After landing her returning aircraft, Saratoga refueled and resumed patrols east of the Solomons. About a week into the patrols, a nearby destroyer reported to Saratoga that a torpedo wake was headed their way. The ship was unable to maneuver away from the torpedo quickly enough and minutes later a torpedo slammed into Saratoga. The attack killed no one onboard and only flooded one fireroom. However, the strike caused short circuits which damaged Saratoga's turbo-electric propulsion system and left her dead in the water. USS Minneapolis (CA-36) took her under tow while Saratoga’s aircraft made way to shore bases. After temporary repairs were made at Tongatabu, Saratoga arrived at Pearl Harbor on 21 September for extended upkeeps.

Saratoga set sail from Pearl Harbor on 10 November, via Fiji, to Noumea which she reached on 5 December. She operated in that vicinity for about a year providing air cover for some minor Allied operations while protecting American forces in the Eastern Solomons. On 1 November 1943, while troops stormed ashore on Bougainville, Saratoga's aircraft neutralized nearby Japanese airfields on Buka. On 5 November, in response to reports of the Japanese concentrating at Rabaul to counterattack the Allied landing forces, Saratoga conducted one of her most brilliant strikes of the war. Saratoga’s aircraft penetrated the heavily defended port and damaged most of the Japanese cruisers, ending the surface threat on Bougainville. About a week later, Saratoga and USS Princeton (CV-23) were designated the Relief Carrier Group for the offensive in the Gilberts, and after a strike on Nauru on 19 November, the ship rendezvoused with the transports carrying garrison troops to Makin and Tarawa. At this time, Saratoga had operated for more than a year without repairs. Saratoga was detached from the group on 30 November to return to the United States, where she underwent overhaul at San Francisco.

On 7 January 1944, Saratoga arrived at Pearl Harbor, and after a brief period of training, joined USS Langley (CVL-27) and Princeton to support the drive into the Marshalls. From 29–31 January, Saratoga’s aircraft struck Wotje and Taroa, and then pounded Engebi—the main island at Eniwetok. During the month of February, Saratoga’s aircraft continued to cripple the Japanese defense by providing close air support over the operation. After the assault was complete, Saratoga took an extended leave of the main theaters in the Pacific to conduct rigorous training and provide support for the British and French navies. On 10 June, Saratoga arrived at Bremerton for repairs that lasted through the summer.

On 24 September, Saratoga arrived at Pearl Harbor and began her second special assignment—training night fighter squadrons. Saratoga continued to train squadrons for about four months until 29 January 1945 when she was rushed out of Pearl Harbor to join the Fleet at Iwo Jima. After landing rehearsals on Tinian, the carrier force Saratoga was directed to carry out diversionary strikes on the Japanese home islands on the night of 16–17 February. On 21 February, Saratoga was detached with an escort of three destroyers to join amphibious forces and carry out night patrols over Iwo Jima and nearby Chichi Jima. However, as Saratoga approached the area of operations, six Japanese aircraft attacked scoring five hits on the carrier in just three minutes. Saratoga's flight deck forward was wrecked, her starboard side was holed twice, and large fires started in her hangar deck. By that evening, the fires were under control and the ship was able to recover aircraft, however Saratoga was ordered to Eniwetok and subsequently to Bremerton for repairs. The ship lost 123 of her crew as a result of the attacks.

After repairs were complete, Saratoga resumed training pilots at Pearl Harbor until the Japanese surrendered, ending World War II. The ship was then assigned “Magic Carpet” duty where she brought home more than 29,000 Pacific war veterans, more than any other individual ship. At the time, Saratoga also held the record for the greatest number of aircraft landed on a carrier, with a lifetime total of 98,549 landings in 17 years. Saratoga received seven battle stars for her World War II service.

After the war, Saratoga was considered surplus and was assigned to Operation Crossroads at Bikini Atoll to test the effect of the atomic bomb on naval vessels. Saratoga survived the first blast, an air blast, but was mortally damaged by a second blast, an underwater detonation. Saratoga was struck from the Navy list on 15 August 1946. View of the USS Saratoga (CV-3) commissioning ceremony, 16 November 1927. Captain Harry E. Yarnell, the ship's first commanding officer, was in the group of people to the left of the cameras, front row right. Naval History and Heritage Command photograph, NH 50784. 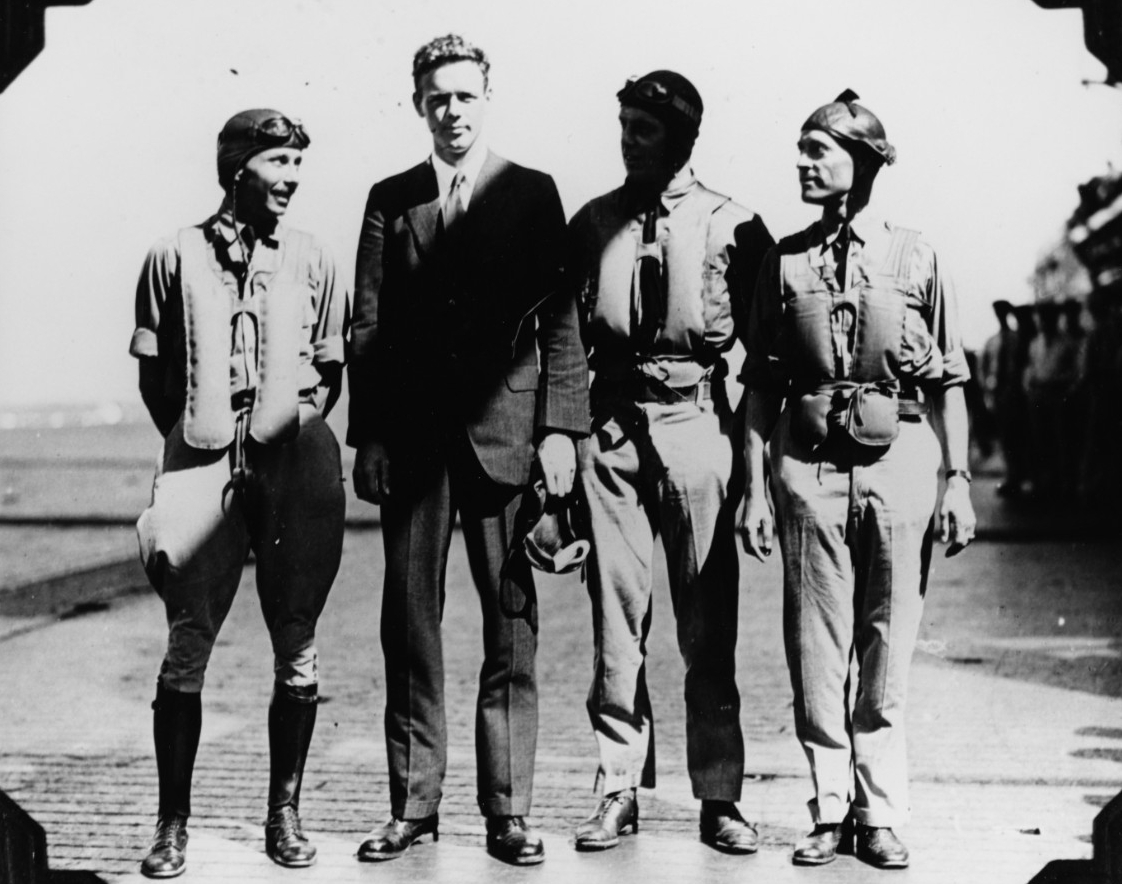 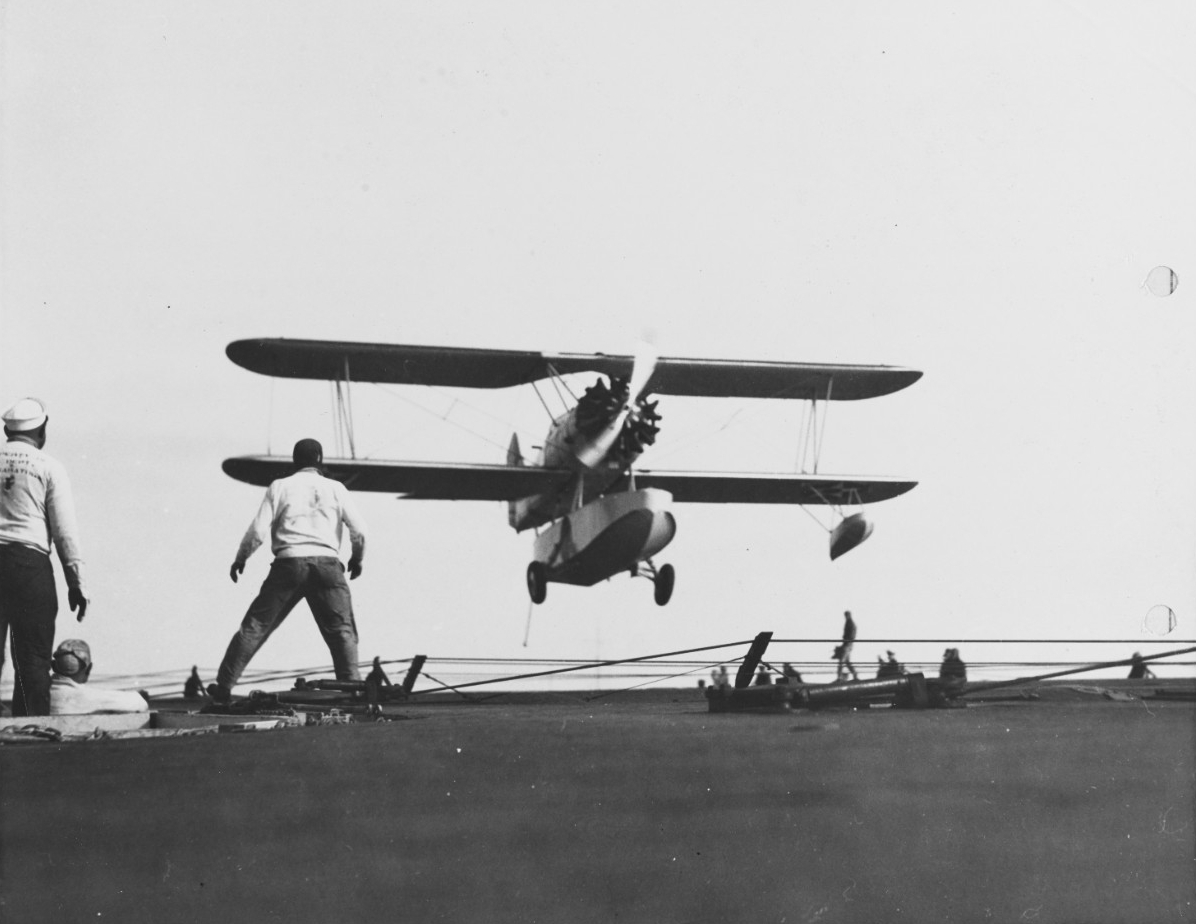 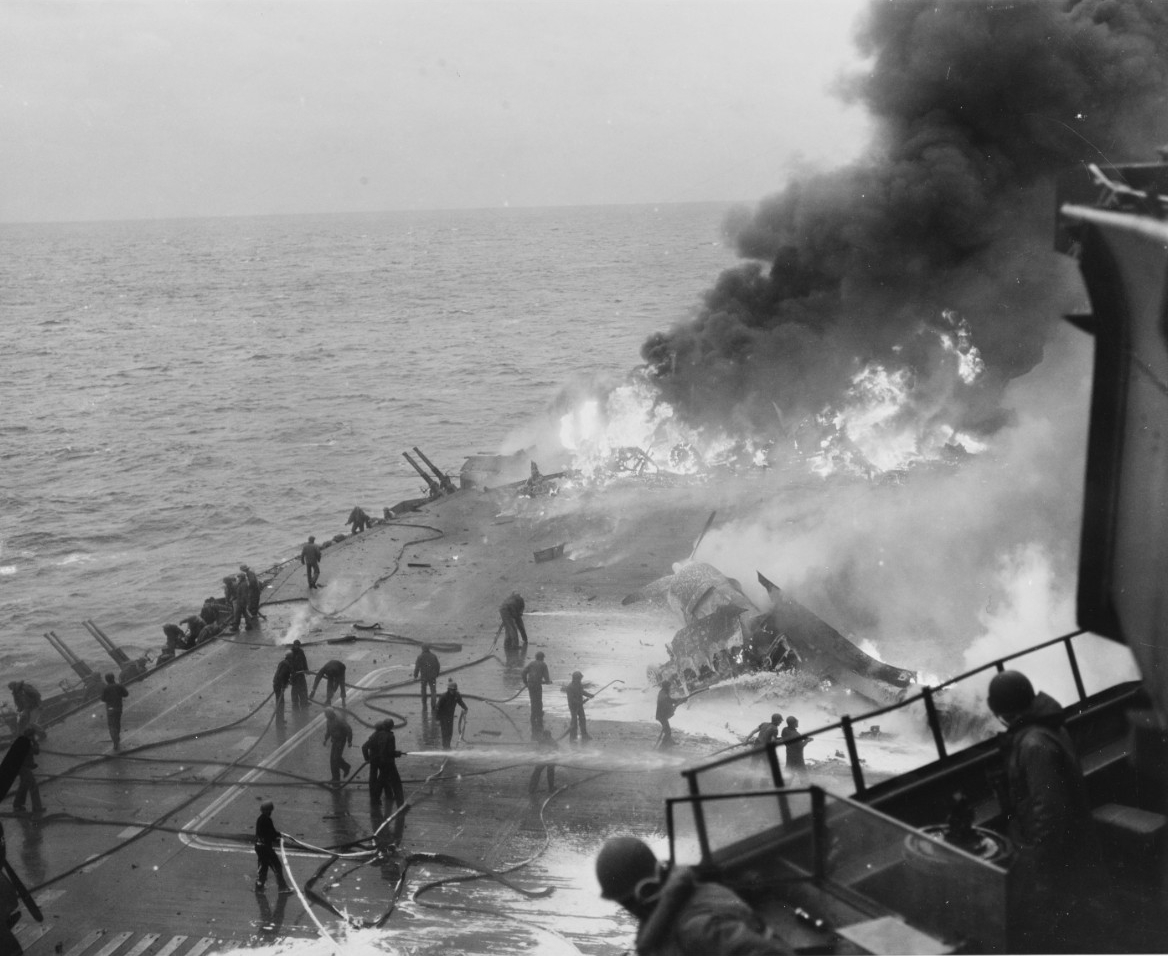 View showing damage on the port side of USS Saratoga (CV-3) incurred by a submarine torpedo on 11 January 1942, 500 miles southwest of Oahu. View taken on 16 January 1942 at Pearl Harbor while in drydock for repairs. Naval History and Heritage Command photograph, NH 84006. WAVES kissed Sailors during a “Back to the States” party on the flight deck of USS Saratoga (CV-3) at Pearl Harbor, 10 September 1945. The ship was about to depart for the mainland carrying personnel due for discharge. National Archives photograph, 80-G-357932.