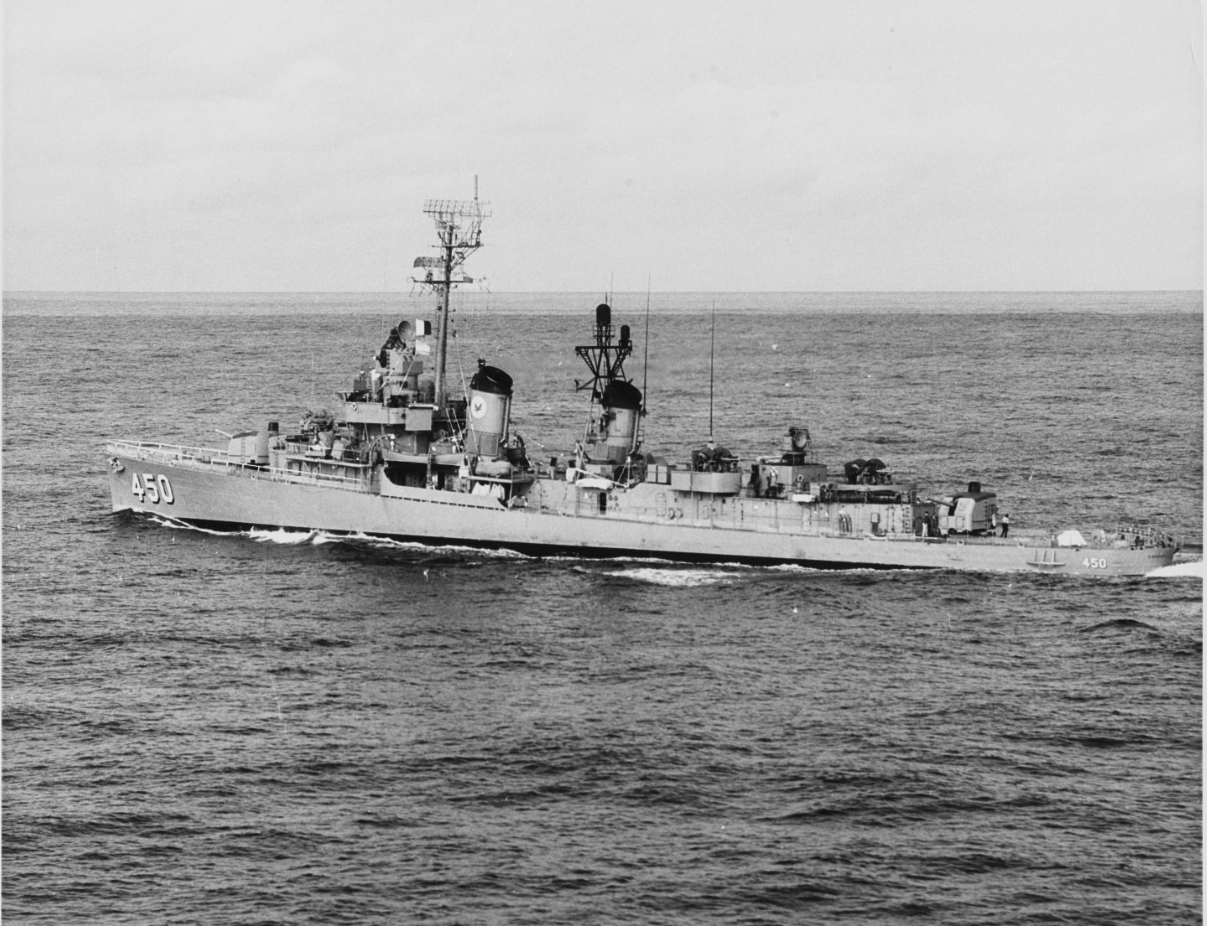 Destroyer USS O’Bannon (DD-450) was commissioned at Boston, Massachusetts, on 26 June 1942 with E.R. Wilkinson in command. After training briefly in the Caribbean, O’Bannon set sail on 29 August for the southwest Pacific, where she joined the fleet in the battle for Guadalcanal. Based at Noumea, New Caledonia, O’Bannon first escorted USS Copahee (CVE-12) to Guadalcanal where naval aviators flew their Wildcats off Copahee’s decks in early October providing reinforcements on the besieged Henderson Field. On 7 November, the ship joined Rear Admiral Daniel J. Callaghan's Support Group, who were transporting critical reinforcements, replacements, food, ammunition, and aviation material. As they approached Guadalcanal, O’Bannon sighted and fired on an enemy submarine that had surfaced, holding it down while the convoy she was protecting passed safely. During the night of 12 November, the convoy was attacked by 15 enemy torpedo bombers, and all but one was shot down. O’Bannon splashed four of the enemy aircraft. Later, intelligence reported that the Japanese were headed south to destroy Henderson Field to break up the American reinforcement mission and to cover reinforcement movements of their own. O’Bannon and other ships of the support force, which consisted of two heavy and three light cruisers, and eight destroyers, confronted the enemy force on 13 November in Ironbottom Sound—named for the number of ships on both sides sunk in the area during the Guadalcanal campaign. O’Bannon boldly attacked the Japanese battleship Hiei with her gunfire, in combination with attacks from the rest of the American force. The enemy ship was so badly damaged that it became a sitting duck, ripe for an air attack which happened the next day sending the ship to the ocean’s floor. In all, the Naval Battle of Guadalcanal was a tough fight, but the Japanese were turned back, and Henderson Field was saved from destruction.

Through the following year, O’Bannon protected landings, carried out escort duties from Noumea and Espiritu Santo to Guadalcanal and Tulagi, joined in bombardments at Guadalacanal, Munda, Kolombangara, and shouldered her share of nightly patrols in the Solomons. The duty was intense and demanded the best of her crew and their ship. Port time was minimal. Usually, a few hours only to fuel and reprovision. On 5 April 1943, O’Bannon fired

on Japanese submarine RO-34 and splashed two enemy aircraft. On 6 July, during the Battle of Kula Gulf, O'Bannon fought with three cruisers and three other destroyers against ten Japanese destroyers. Although an American cruiser was lost in the engagement, the enemy was removed from the area. About a week later, a second battle was fought against a Japanese cruiser, five destroyers, and four destroyer-escorts in the same waters. The same American force sank the Japanese cruiser and turned the other enemy ships away.

For the next couple of months, O’Bannon spent most of the time in Vella Gulf guarding landings, intercepting Japanese troop convoys and their covering escorts, and fighting off air attacks. With the aid of other American destroyers on several patrols, O’Bannon sank a number of barges, two submarine chasers, an armed boat, and a gun boat. The highlight of the deployment was during the Battle of Vella Lavella on 6 October when the Japanese attempted to evacuate their troops from the island. In company with USS Selfridge (DD-357) and USS Chevalier (DD-451), O’Bannon led the attack on the enemy force which was composed of nine to ten destroyers and smaller armed craft. Japanese destroyer Yugumo was sent beneath the waves, but both Selfridge and Chevalier took torpedo hits. Chevalier had to be abandoned, and O’Bannon rescued her survivors. The enemy departed the area when three more American destroyers chased them out of the area.

After the engagement, O’Bannon made repairs at Tulagi, and then steamed to the American west coast for overhaul. By March 1944, O’Bannon was back in the Solomons, and again, she provided escort for other ships and conducted bombardment operations. On 18 October, O'Bannon cleared Hollandia for escort reinforcements in the invasion of Leyte. O'Bannon guarded a northern transport area and patrolled the entrances to Leyte Gulf during the battle, coming under air attack frequently.

Through June of the following year, O’Bannon operated primarily in the Philippines serving as an escort or as an assault vessel for numerous Pacific island invasions. Air attacks were common, but O’Bannon’s antiaircraft crew splashed numerous enemy aircraft. On 31 January 1945, during the Lingayen offensive, O’Bannon and three other destroyers sank Japanese submarine RO-115. At the end of April into early May, O’Bannon interrupted her Philippine service to provide fire support at Tarakan, Borneo, and cover minesweeping operations in the area. On 17 June, O’Bannon rendezvoused with a group of escort carriers off Okinawa, and guarded them as they attacked Sakashima Gunto. In July, she protected American carriers as their aircraft struck northern Honshu and Hokkaido. When the Japanese agreed to surrender, O’Bannon patrolled the coast of Honshu until late August, when she joined two other destroyers to escort USS Missouri (BB-63) into Tokyo Bay. Afterwards, O’Bannon sailed to California where she was decommissioned in San Diego on 21 May 1946.

Between January 1949 and February 1950, O’Bannon was converted to an escort destroyer and redesignated DDE-450. She was recommissioned on 19 February 1951 to serve out of Pearl Harbor. Later that year, O’Bannon operated with United Nations forces during the Korean War. For the next seven months, O’Bannon guarded carriers at sea, fired on enemy gun emplacements, and protected convoys between Japan and Korea. Between the Korean and the Vietnam War, O’Bannon took part in multiple training operations and made several port visits in the Far East. In 1966, O’Bannon made way to the Vietnam coast to guard USS Kitty Hawk (CVA-63) as her aircraft struck targets in the war torn country. During May and June, O’Bannon conducted shore bombardments, destroyed Vietcong base camps, troop concentrations, and small craft. She returned to Vietnam in late 1967 with USS Constellation (CVA-64) and operated as an aircraft guard on Yankee Station through 4 November. As 1967 ended, O'Bannon was still on the gun line supporting allied ground forces. She departed the area later in 1968.

On 30 January 1970, O’Bannon was decommissioned at Pearl Harbor next to her sister ship, USS Nicholas (DD-449), who was constructed at the same time. O’Bannon received the Presidential Unit Citation for her valiant service during the Guadalcanal campaign. She also received 17 battle stars for her service during World War II and earned three more for her contribution to the Communist invasion of South Korea. 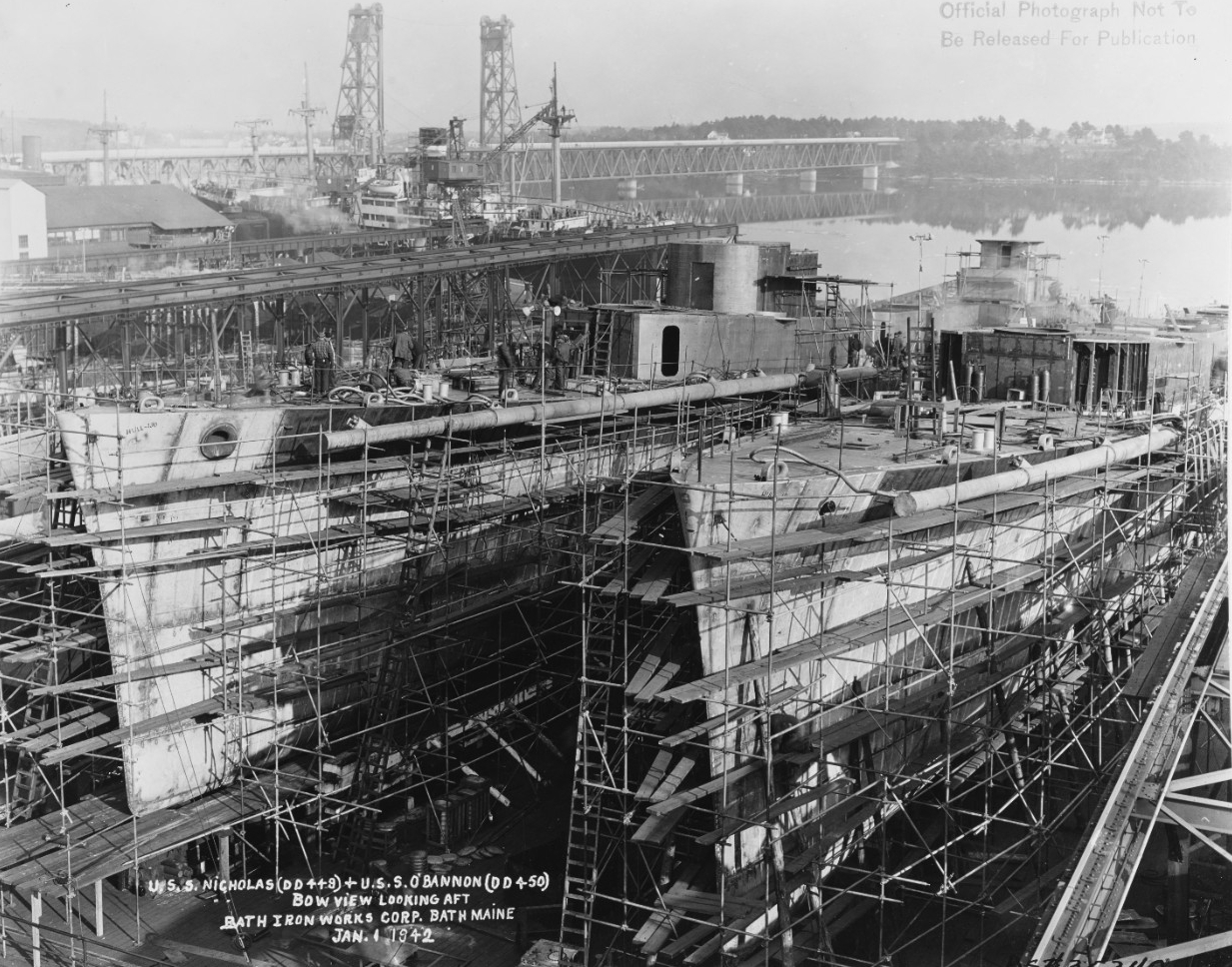 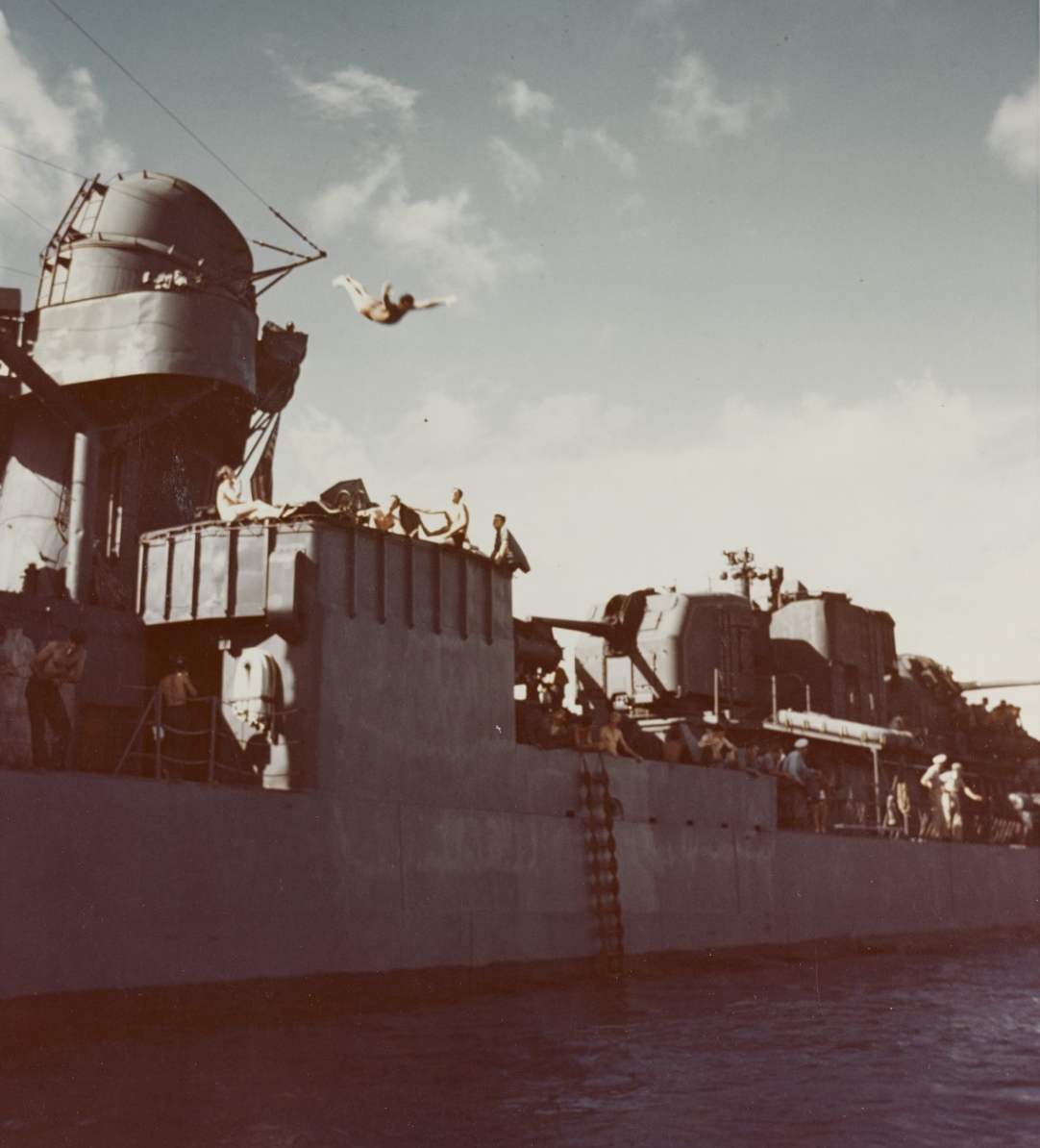 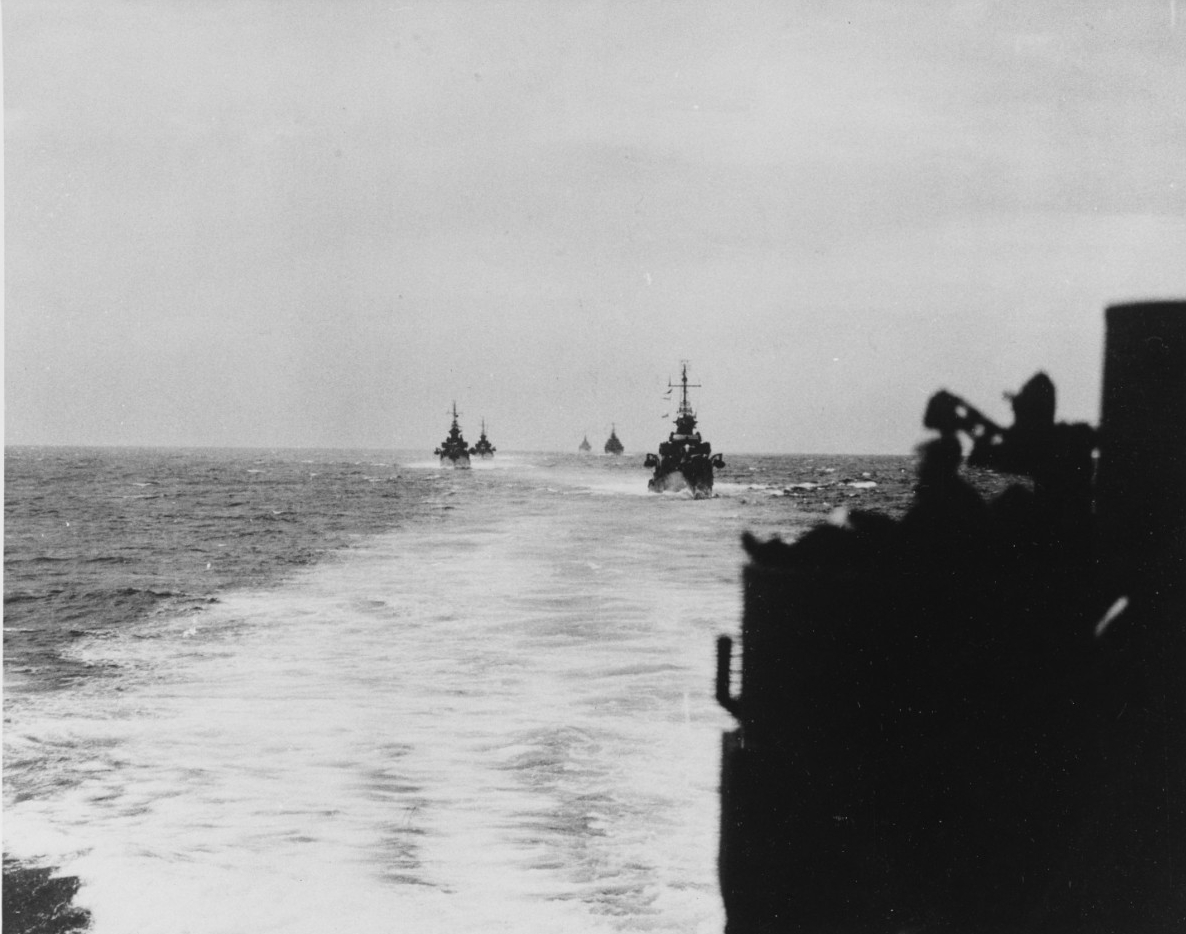 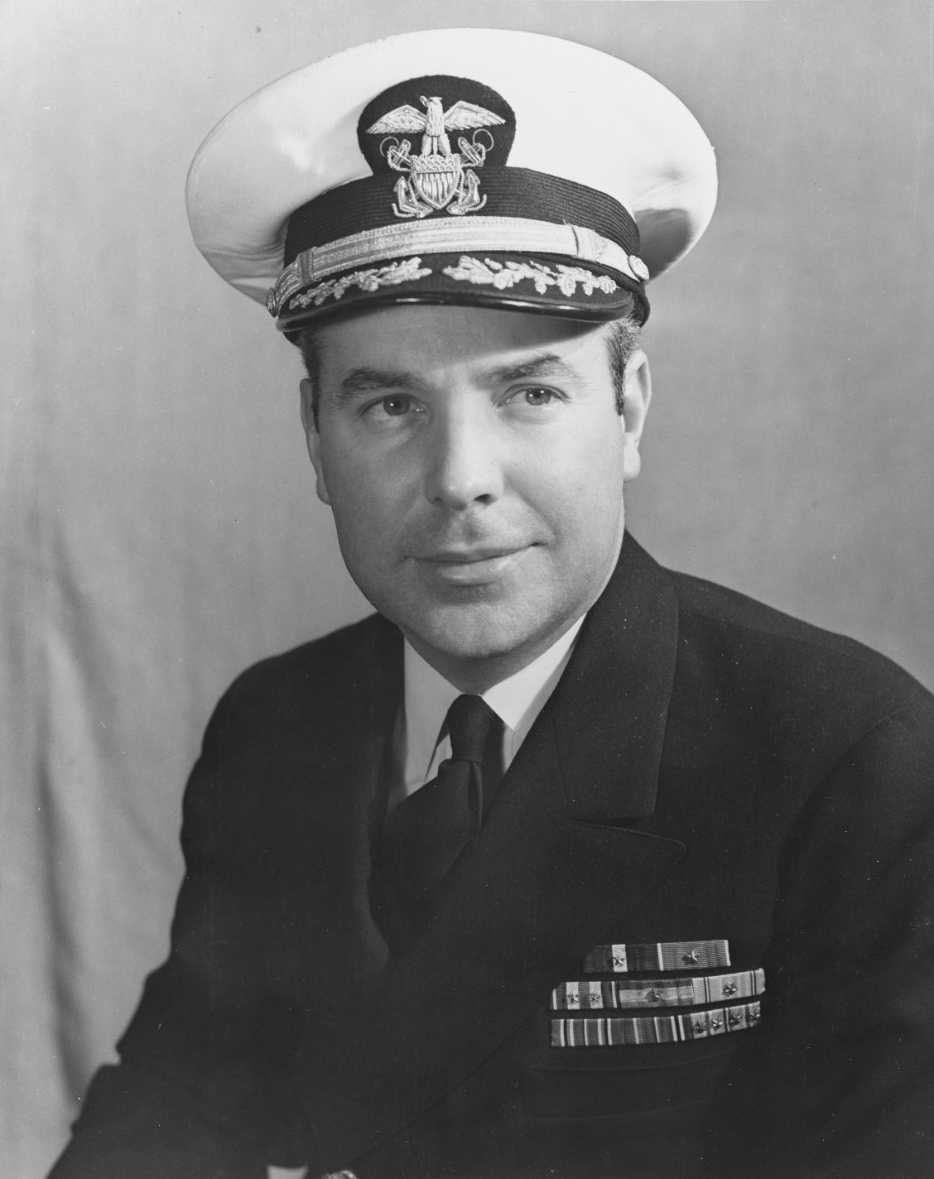 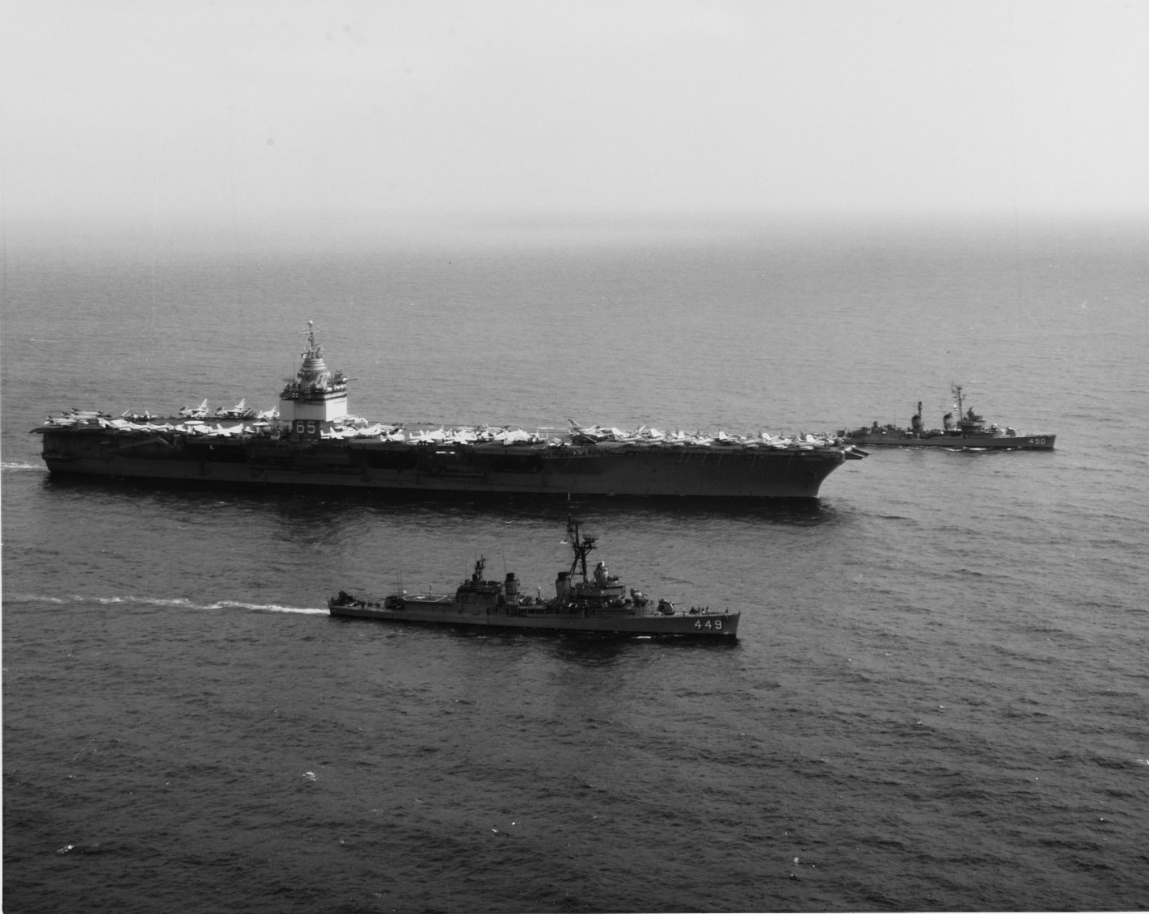 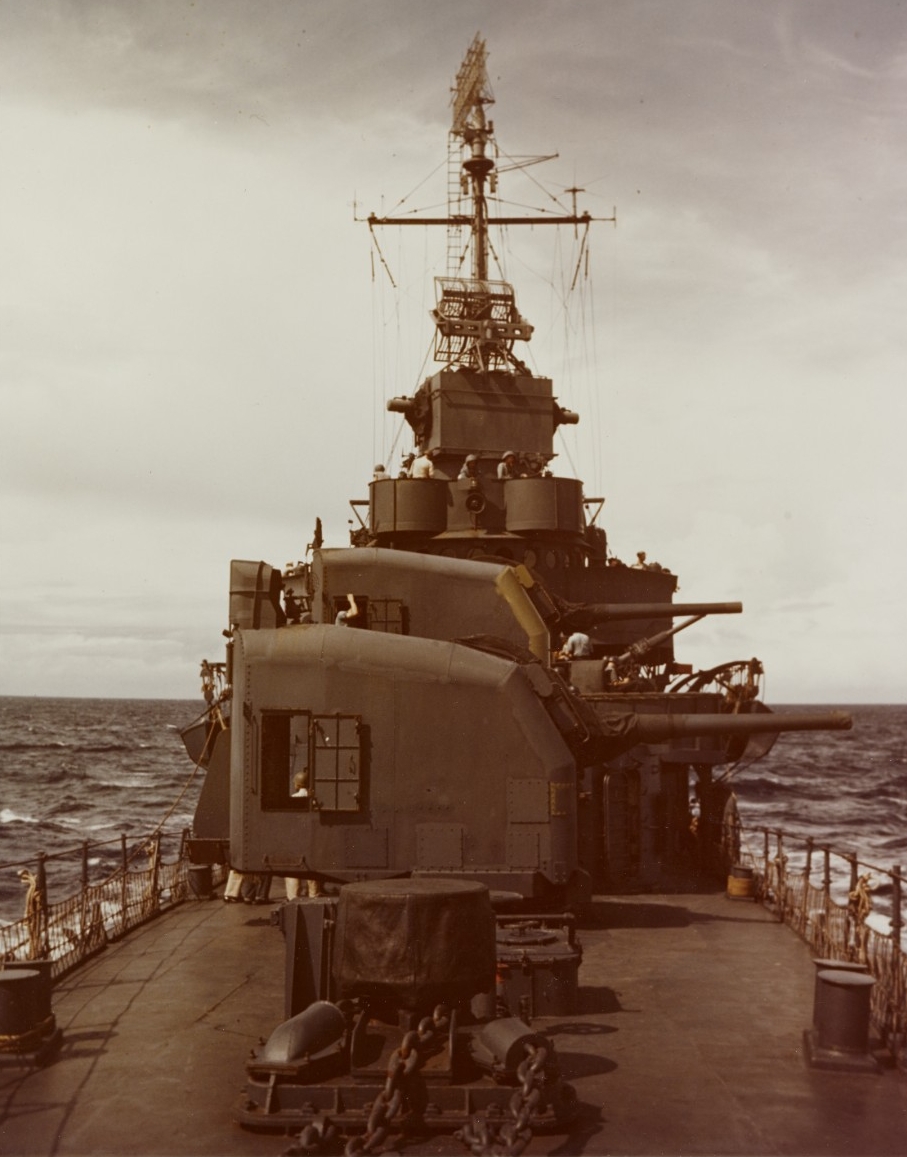 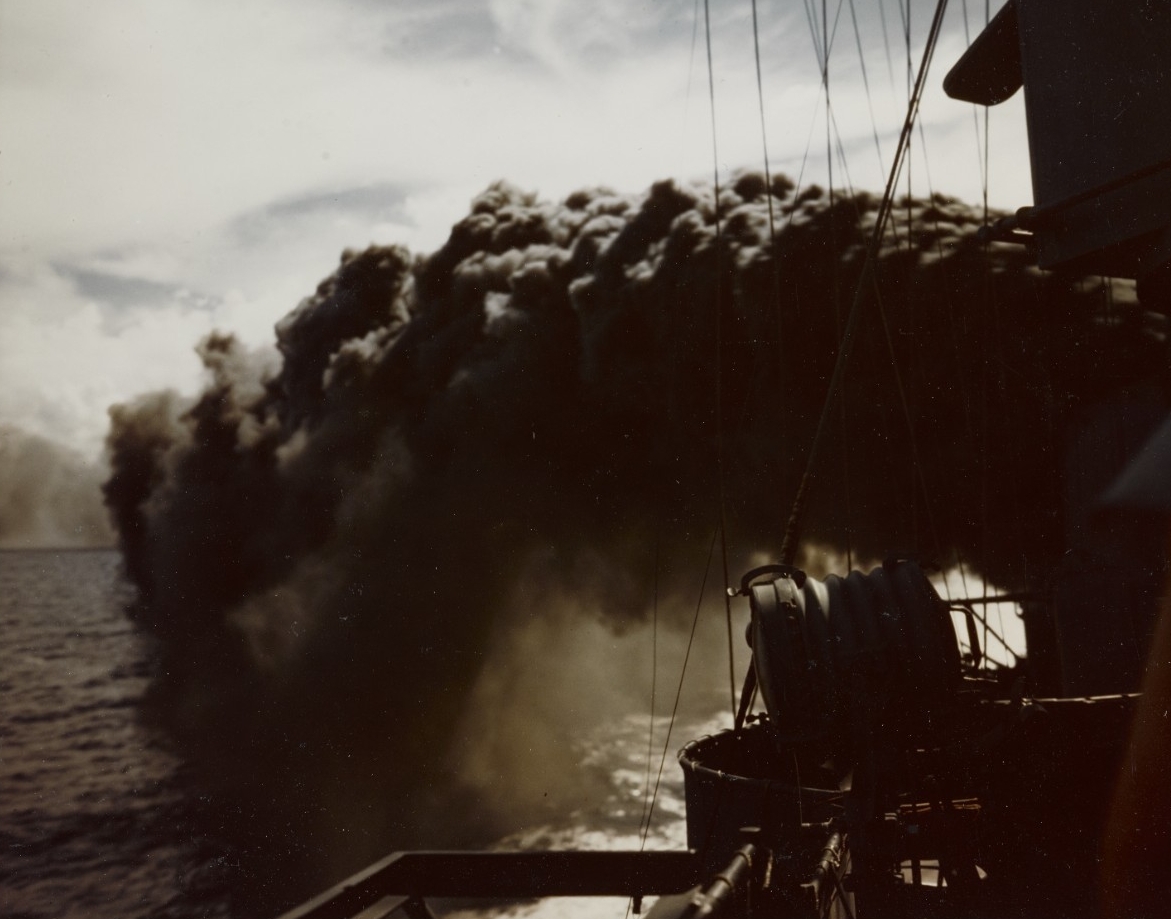 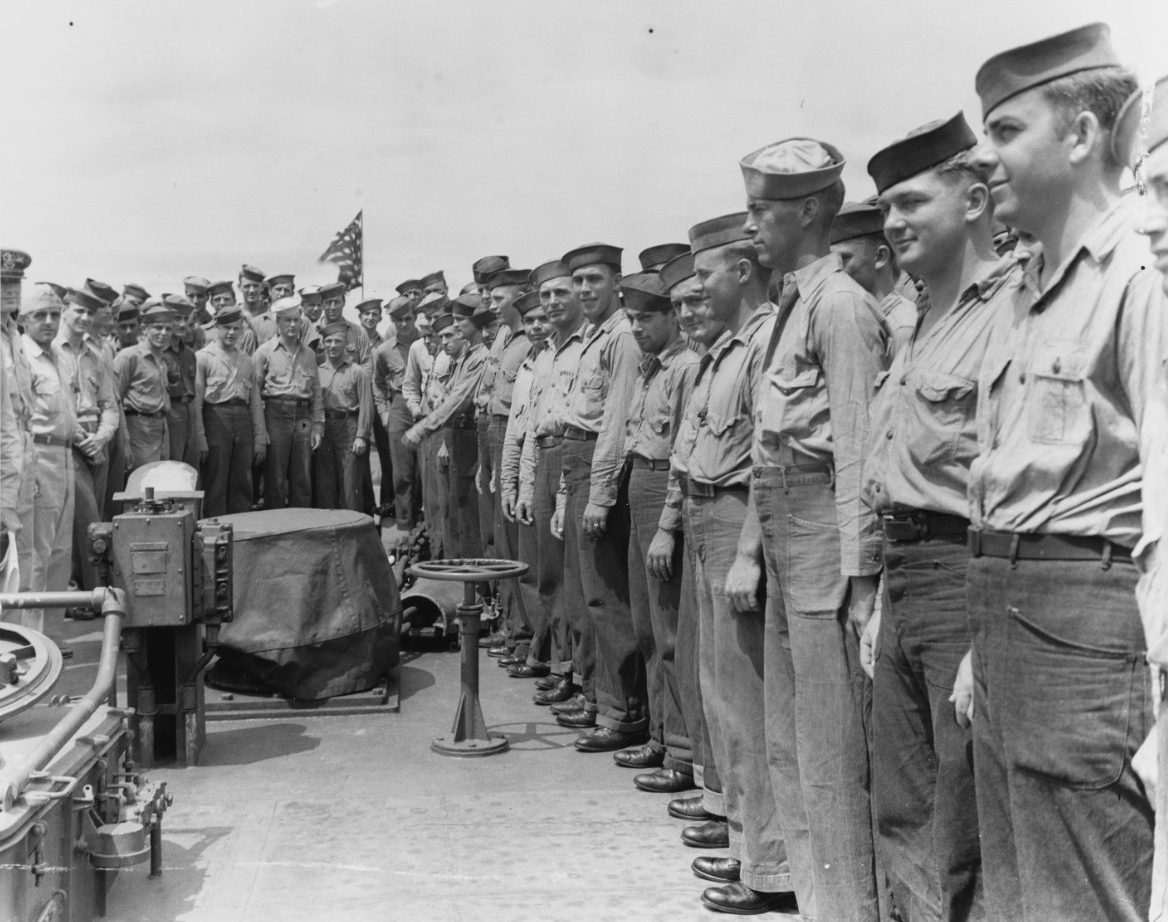 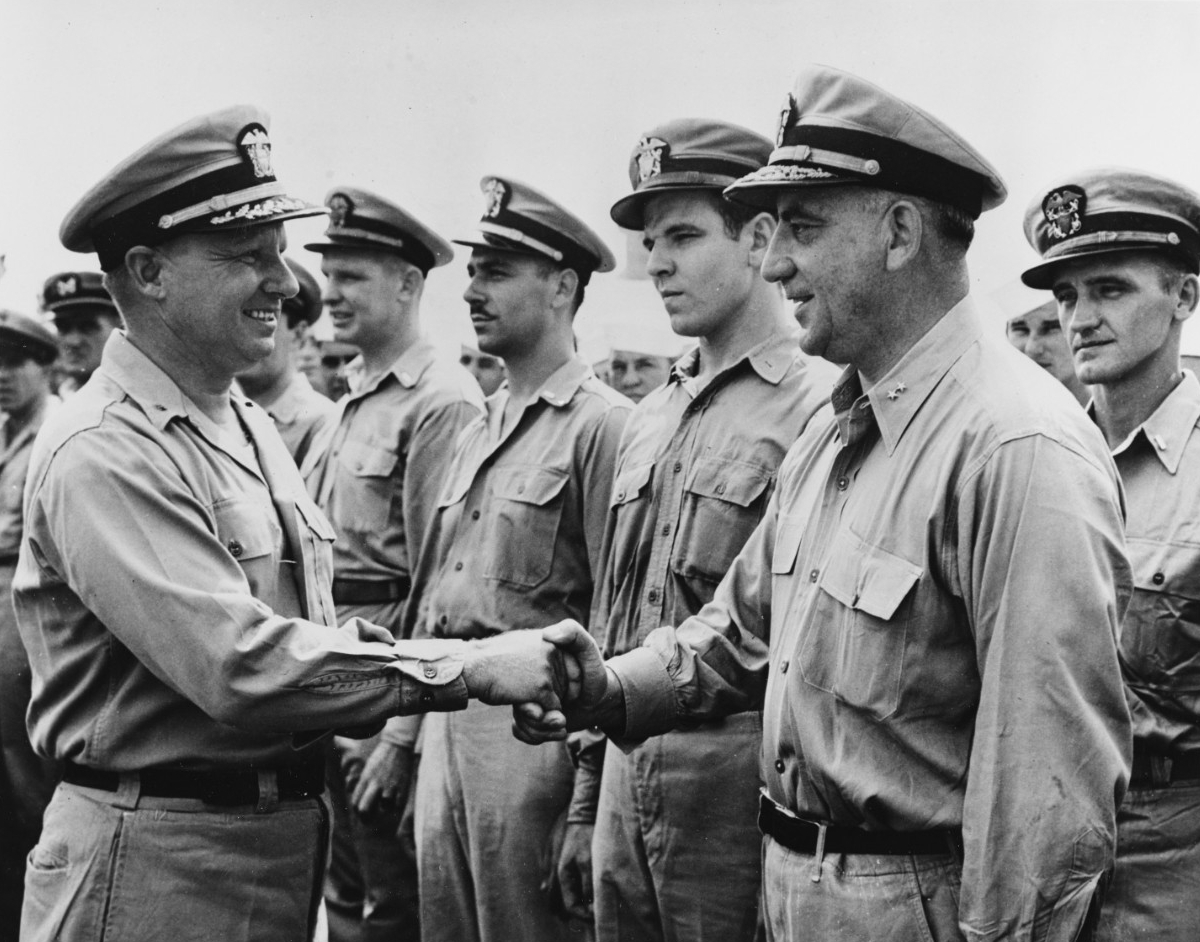 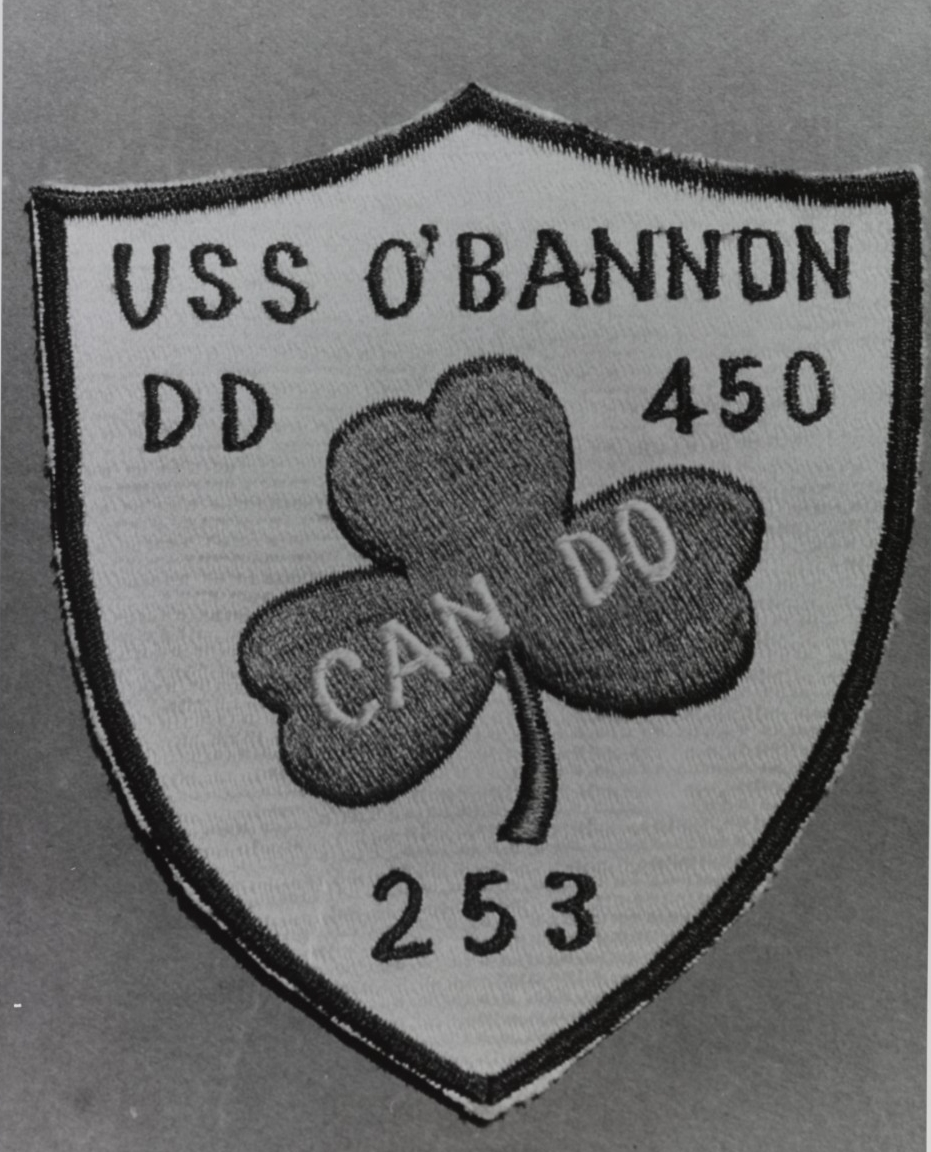 USS O’Bannon (DD-450) embroidered patch of emblem in use about 1968 with design featuring a three-leaf clover and motto, "can do." Naval History and Heritage Command photograph, NH 68007-KN.