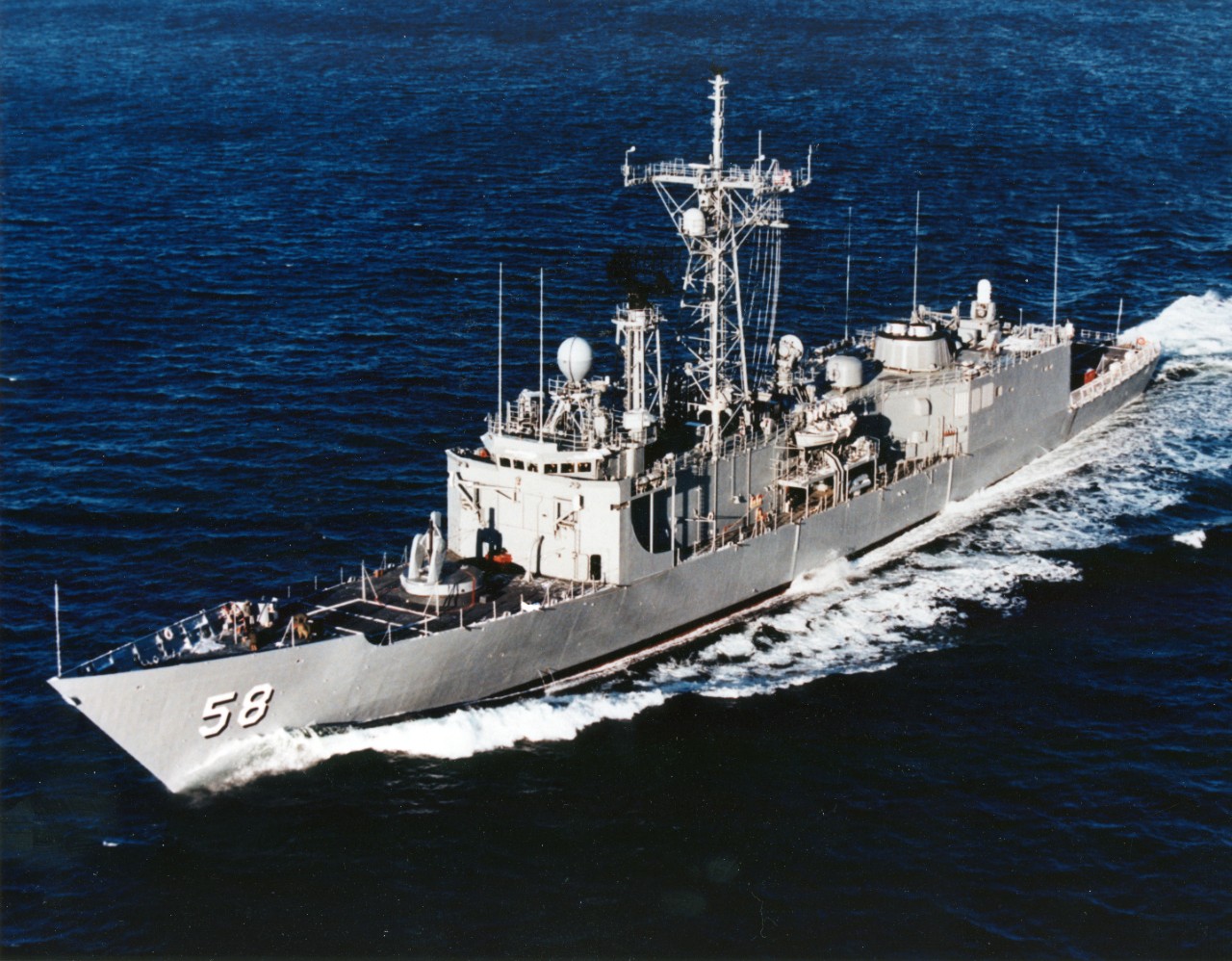 USS Samuel B. Roberts, an Oliver Hazard Perry–class guided missile frigate, was commissioned in April 1986. The frigate was the third ship to be named after Navy Coxswain Samuel Booker Roberts Jr, who posthumously received the Navy Cross for rescuing stranded Marines from Guadalcanal in the Solomon Islands during World War II.

In April 1988, the ship participated in Operation Earnest Will in the Arabian Gulf. The United States launched the operation to protect reflagged Kuwaiti tankers during the “Tanker War” phase of the Iran-Iraq war.

On 14 April 1988, Samuel B. Roberts was on her way to meet with San Jose (AFS-7) to replenish stores when a lookout spotted mines in the area. Once the commanding officer, Cmdr. Paul Rinn, confirmed the ship had entered a minefield, he sent the crew to battle stations. He also ordered the men below to come topside—in the event of mine damage below the waterline. Rinn reversed engines and backed out of the minefield but hit an Iranian moored contact mine.

The mine inflicted severe damage to the ship, breaking her keel and blowing a 21-foot-hole in the port side, flooding the ship with 2,000 tons of water in two main spaces and starting a major fire. Three of the four diesel generators were damaged, and the ship lost power for five minutes. While trapped below decks, one Sailor, Fireman Mike Tilley, was able to “suicide-start” the fourth diesel generator. This restored some electrical power and pumps, so the crew was able to fight the fire. Meanwhile, Sailors worked to shore up the flooding while others cabled the cracked superstructure. Seven hours later, the crew had stabilized the ship.

Ten Samuel B. Roberts Sailors sustained severe injuries, and four were seriously burned. Rinn was injured as well; the shock wave from the mine broke the metatarsal bone in his left foot.

Commander, Joint Task Force Middle East/Middle East Force, Rear Adm. Anthony Less, radioed Rinn several times from his flagship Coronado (AFG-11) to gain updates on the status of the ship, and he asked the captain about the possibility of losing the ship. Rinn replied that he would not abandon ship, and added, “No higher honor,” which was the ship’s motto. It was a nod to Lt. Cmdr. Robert Copeland, the captain of the first Samuel B. Roberts (DE-413), which was sunk by Japanese forces on 25 October 1944, during the Battle of Leyte Gulf. Copeland, who was pulled out of the water by his shipmates, stated in an after-action report that he could think of “no higher honor than to have served with these men.”

On 17 April 1988, the ship was towed into Dubai for dry-docking and temporary repairs. Several months later, the Dutch heavy-lift ship Mighty Servant carried the frigate to a dry dock at Bath Iron Works in Maine.

On 18 April, the U.S. Navy launched Operation Praying Mantis against Iranian targets in the Arabian Gulf in retaliation. In the one-day operation, the U.S. Navy destroyed two Iranian surveillance platforms, sank two of their ships, and severely damaged another.

From 2004 to 2008, Samuel B. Roberts participated in drug interdiction and relief operations in the U.S. Southern Command’s area of responsibility. While deployed to the Mediterranean in 2010, the ship set a new Navy record for flight hours of its embarked Northrop Grumman MQ-8B Fire Scouts. 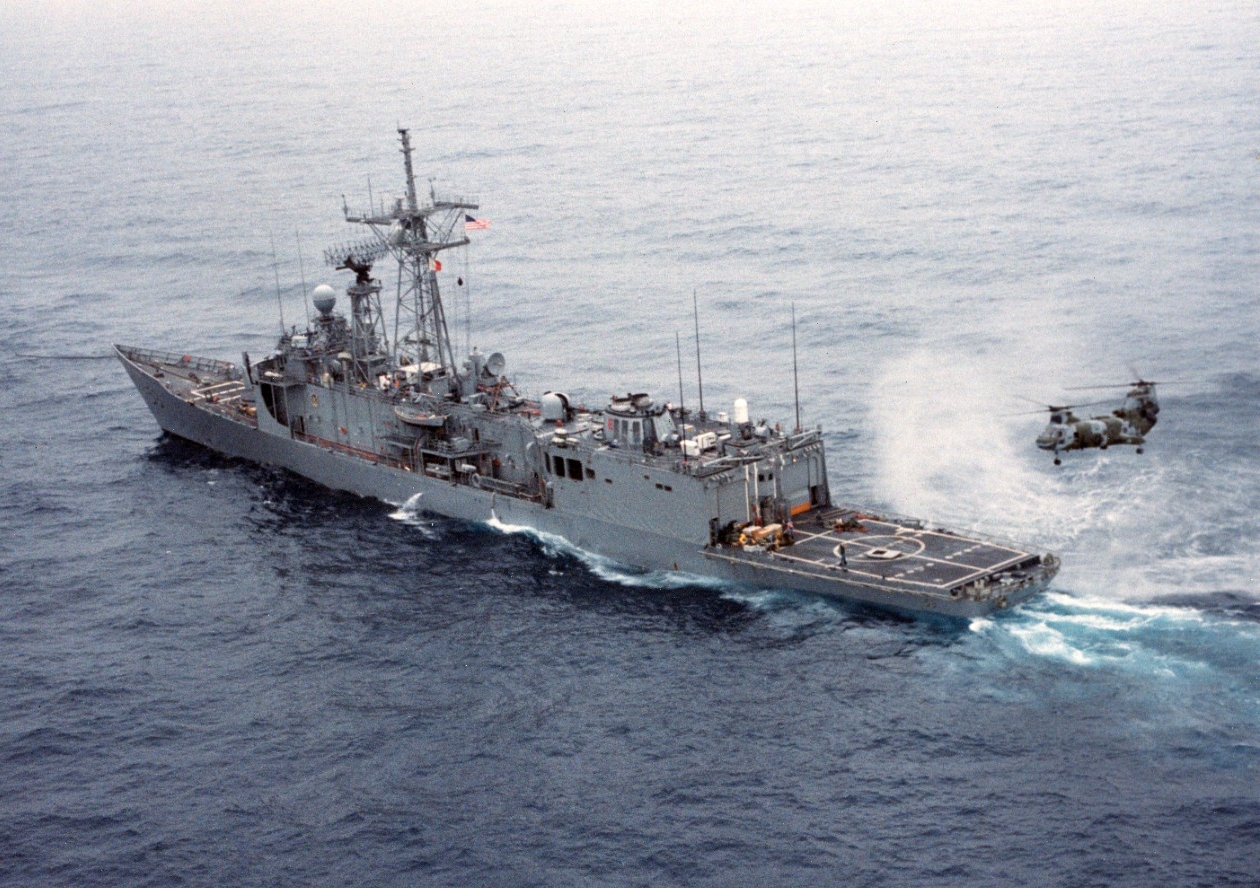 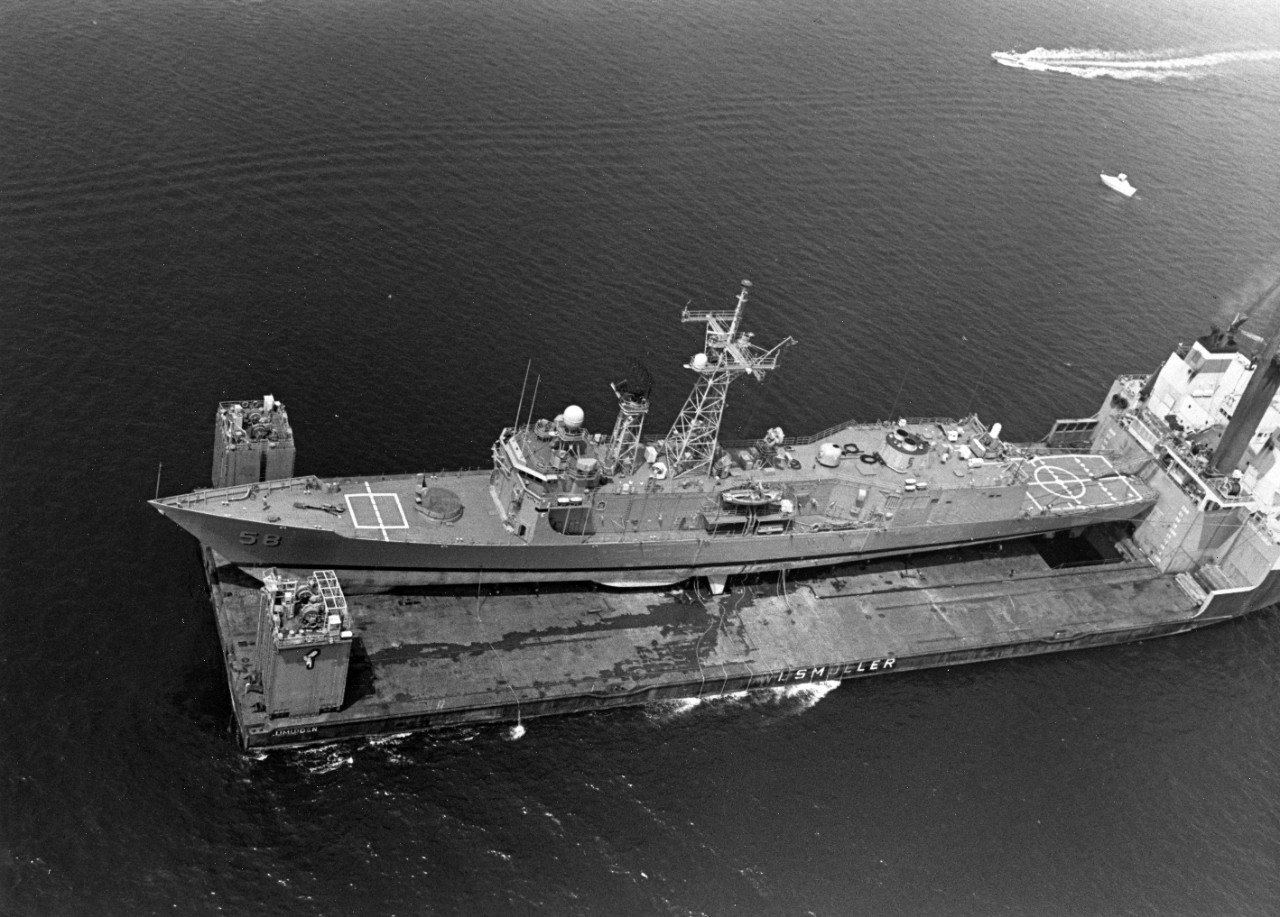 An aerial view of the guided missile frigate USS Samuel B. Roberts (FFG-58) being transported by the Dutch heavy-lift ship Mighty Servant II in Narragansett Bay. The frigate was damaged when it struck a mine while on patrol in the Persian Gulf 14 April 1988. (DN-SN-89-03163). 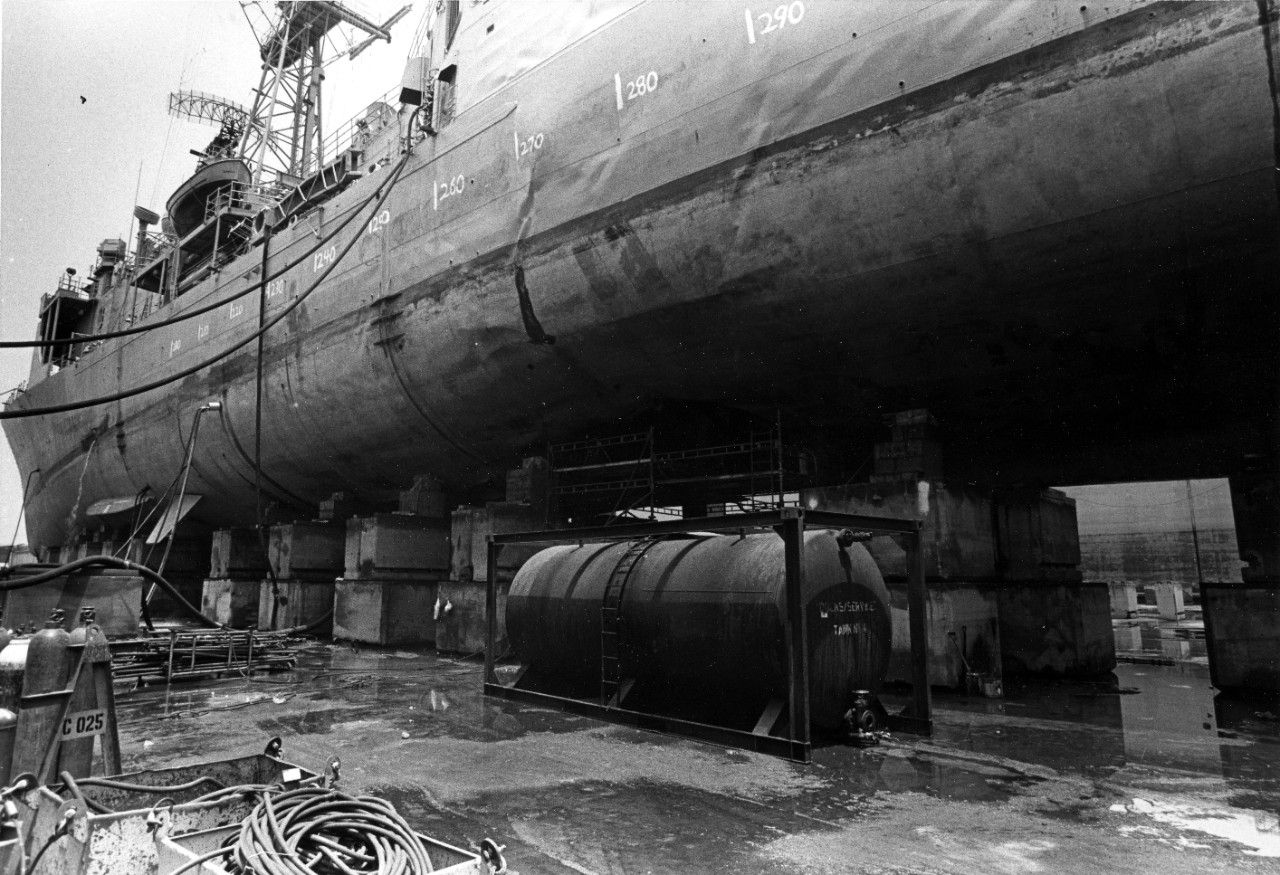 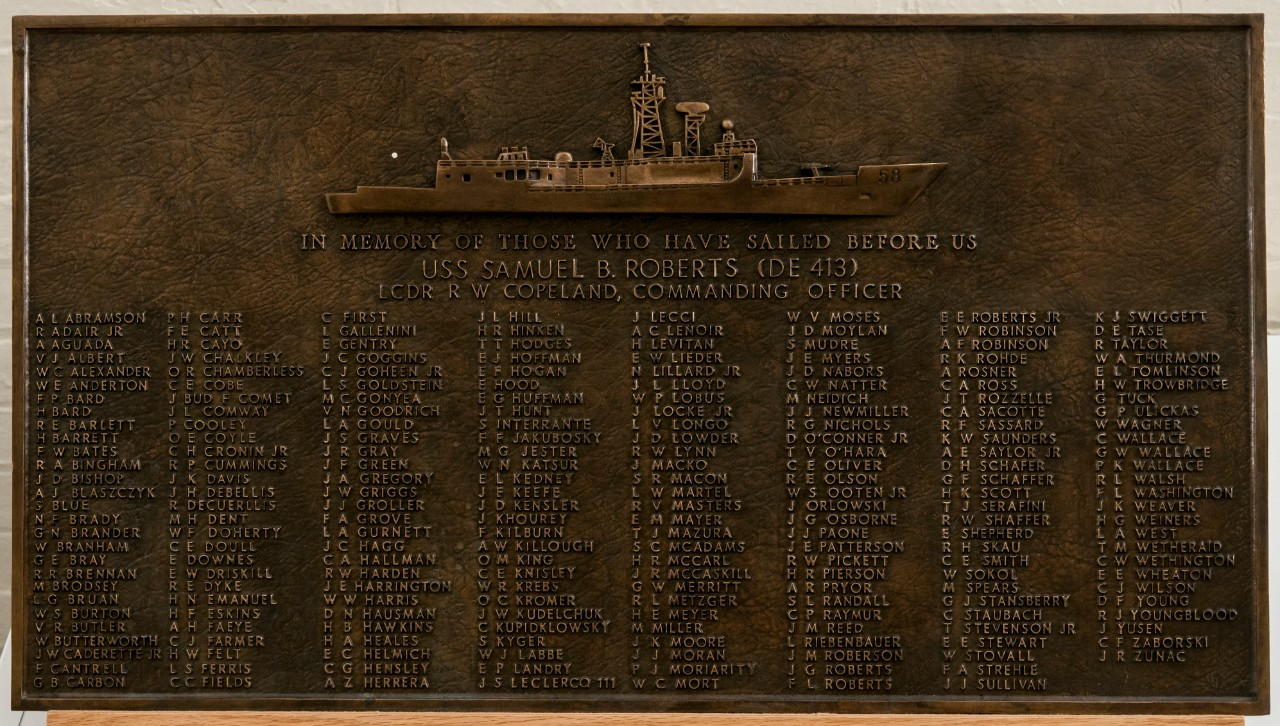