A city in California. 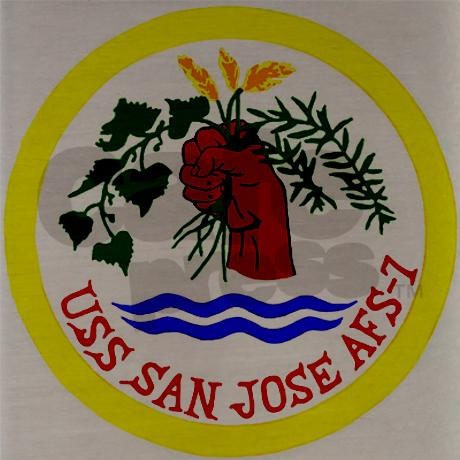 The origin of San Jose’s insignia lies in early maritime history. The circular shape symbolizes the manner in which seas encompass the earth. The two undulating lines are derived from ancient Greece, and represent the two oceans that border the United States. The grape vine and wheat are taken from the seal of the city of San Jose. They typify the city’s role as a center of agriculture. The wheat also signifies man’s need for nourishment and relates to San Jose’s mission of supplying the fleet with food. The olive branch stands for the Navy’s role as peace keeper of the seas. The upraised forearm and fist have their source in medieval heraldry and mean “Ready For Action.” Collectively, San Jose’s coat of arms express the ship’s dual heritage, from the city and the Navy, and her dual mission, to aid in keeping the peace and to carry stores to naval ships.

Following commissioning and fitting out, San Jose operated as part of the Pacific Fleet Service Force. She made a short cruise from San Diego to Acapulco, Mexico (7–17 December 1970), recovering a small capsized Mexican fishing boat without crew or passengers at 27°10'N, 115°6'2"W, on 8 December. The ship turned over the boat to the Mexican authorities upon her arrival at Acapulco. San Jose’s historian observed that she embarked and loaded a “multitude of families, pets and cars and carried everyone on a maiden voyage” to Oakland, Calif., for the ship’s “first arrival in her homeport area” (8–9 February 1971).

She was forward deployed to Guam to support the Seventh Fleet during the 1980s and 1990s. In the wake of the Iraqi invasion of Kuwait on 2 August 1990, a coalition that eventually comprised 29 nations initiated Operation Desert Shield: a UN-sanctioned economic blockade of Iraq. After Saddam Hussein, the Iraqi leader, refused to withdraw his country’s troops, the coalition then launched Operation Desert Storm to liberate Kuwait. San Jose deployed for those operations during the Persian Gulf War (24 September 1990–13 March 1991).

San Jose was decommissioned and placed in service with the Military Sealift Command (MSC) as USNS San Jose (T-AFS-7) on 2 November 1993. 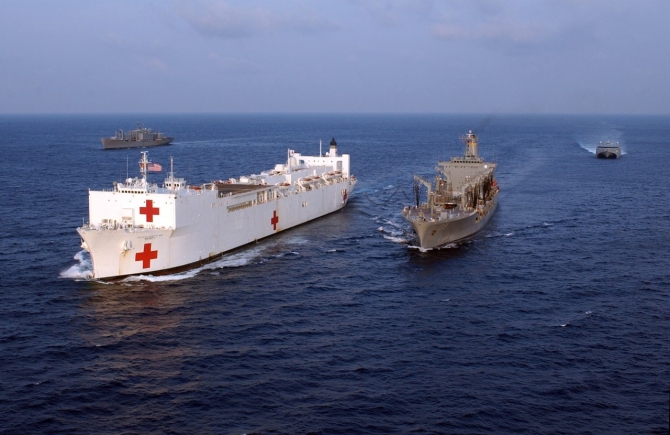 The ship was inactivated on 27 January 2010, and then transferred to the custody of the Maritime Administration. Commercial tugboat Roughneck took her in tow from Pearl Harbor, Hi., to Brownsville, Texas, in December 2012. On 9 October 2013, All Star Metals, LLC, of Brownsville announced that it had “dismantled” San Jose.