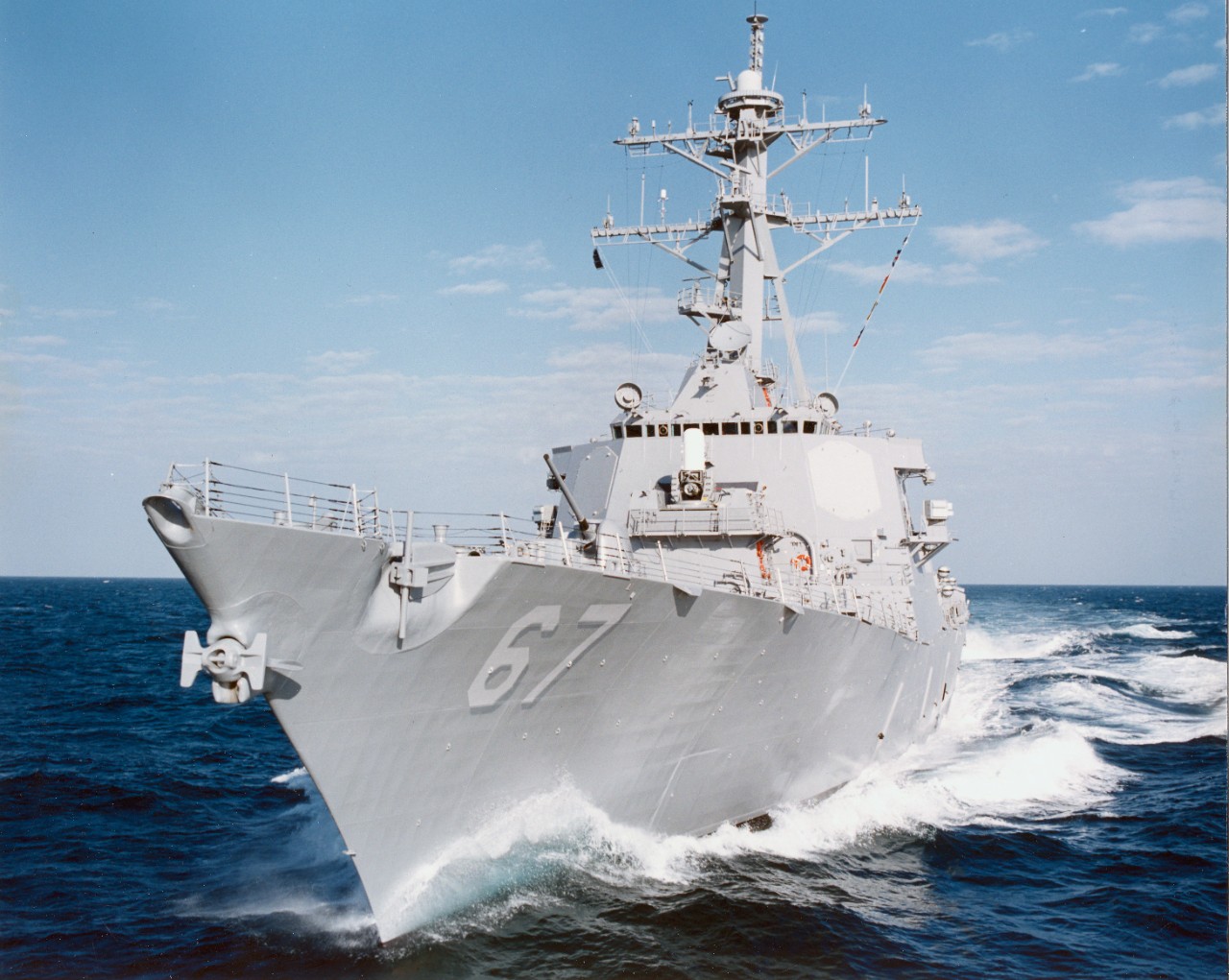 On 8 August 2000, with Kirk S. Lippold in command, Cole was deployed with guided missile frigate Simpson (FFG-56) and Military Sealift Command (MSC)-manned oiler USNS John Lenthall (T-AO-189) from Norfolk to the Mediterranean, Red Sea, Gulf of Aden, and Indian Ocean. On 12 October, while Cole refueled at Aden, Yemen, two al-Qaeda terrorists brought an inflatable Zodiac-type speedboat that carried a bomb alongside the destroyer, port side amidships, and detonated their lethal cargo. The explosion blew a 40-foot wide hole in Cole, but the crew’s valiant damage control efforts saved her.

Cole carried out emergent repairs and on 29 October stood out of Aden. The following day, MSC-manned heavy lift vessel Blue Marlin loaded the destroyer on board and sailed her to Pascagoula for extensive repairs, reaching that port on 13 December. Cole’s crewmembers were flown to Rhein-Main AFB Germany, and from there to Norfolk, VA. Cole’s Sailors then completed convalescent leave through 1 December, and the ship returned to the water on Christmas Eve and continued repairs and maintenance into 2001. On 12 October 2001, the USS Cole (DDG-67) Memorial was dedicated at Naval Station Norfolk to honor the memory of the victims. The Navy subsequently enhanced global force protection training during crucial transits, and Sailors qualified to fire M60 and Browning M2 .50 caliber machine guns to defend against assaults by low-slow flying aircraft and small boats. 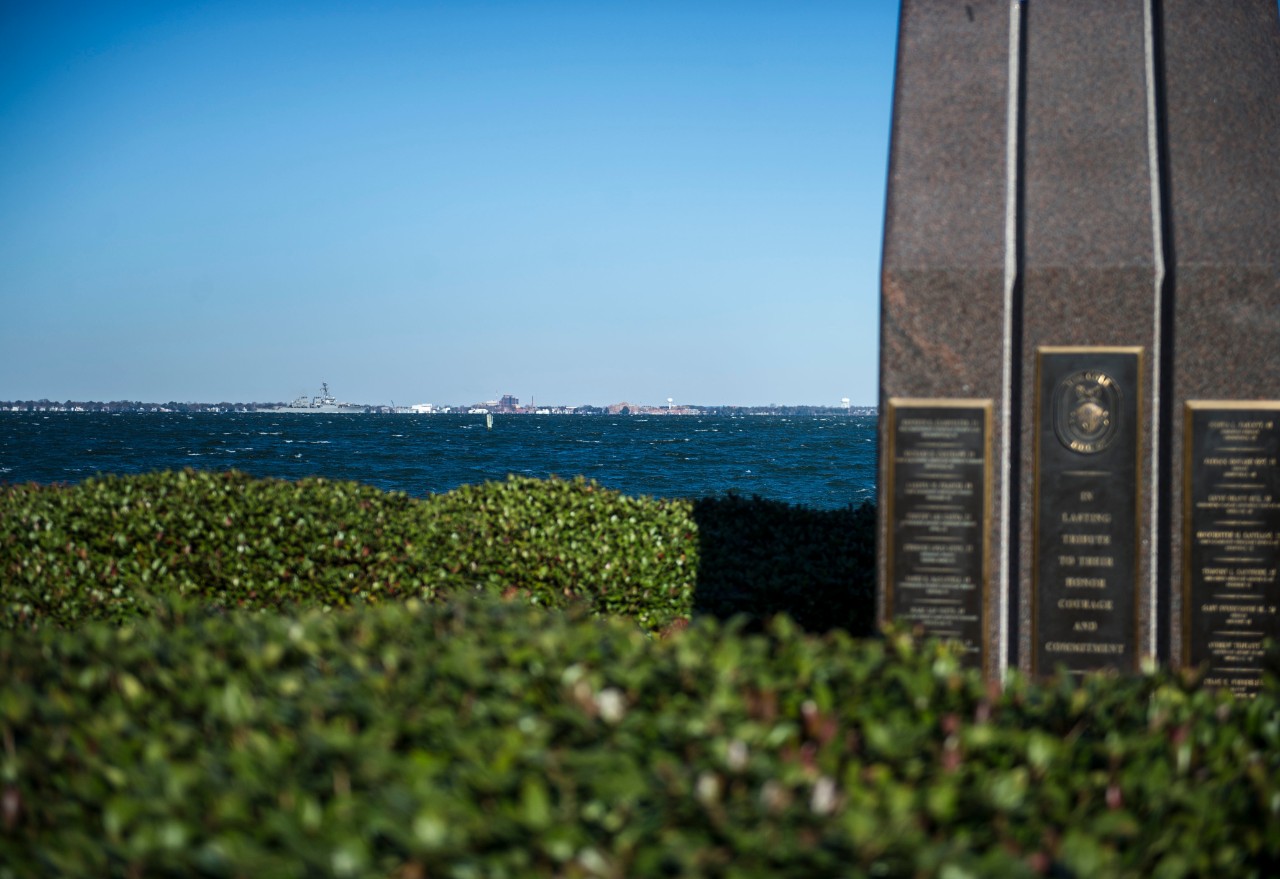 USS Cole In Memoriam—Honoring Those Lost

At 1118 on the morning of 12 October 2000, as USS Cole (DDG-67) was refueling in Aden Harbor, Yemen, suicide bombers detonated an explosive-laden boat directly against the port side of the ship. The resulting blast killed 17 Sailors, wounded 37 others, and tore a hold forty by sixty feet in the ship’s hull. In the aftermath of the explosion, the crew of USS Cole fought tirelessly to free shipmates trapped by the twisted wreckage and limit flooding that threatened to sink the ship. The crew’s prompt actions to isolate damaged electrical systems and contain fuel oil ruptures prevented catastrophic fires that could have engulfed the ship and cost the lives of countless men and women. Skillful first aid and advanced medical treatment applied by the crew prevented additional death and eased the suffering of many others. Drawing upon their Navy training and discipline, the crew heroically conducted more than 96 hours of sustained damage control in conditions of extreme heat and stress. Deprived of sleep, food, and shelter, they vigilantly battled to preserve a secure perimeter and restore stability to engineering systems that were vital to the ship’s survival. By their sacrifice and bravery in the fact of daunting adversity, the crew of USS Cole personified Honor, Courage, and Commitment.

Published figures for the number of Sailors injured in the USS Cole explosion range from 37 to 47—the official number is 37. Discrepancies among the numbers reflect inclusion of evacuated Sailors whose conditions were not a direct result of the explosion and/or those whose injuries did not meet the threshold for award of the Purple Heart. 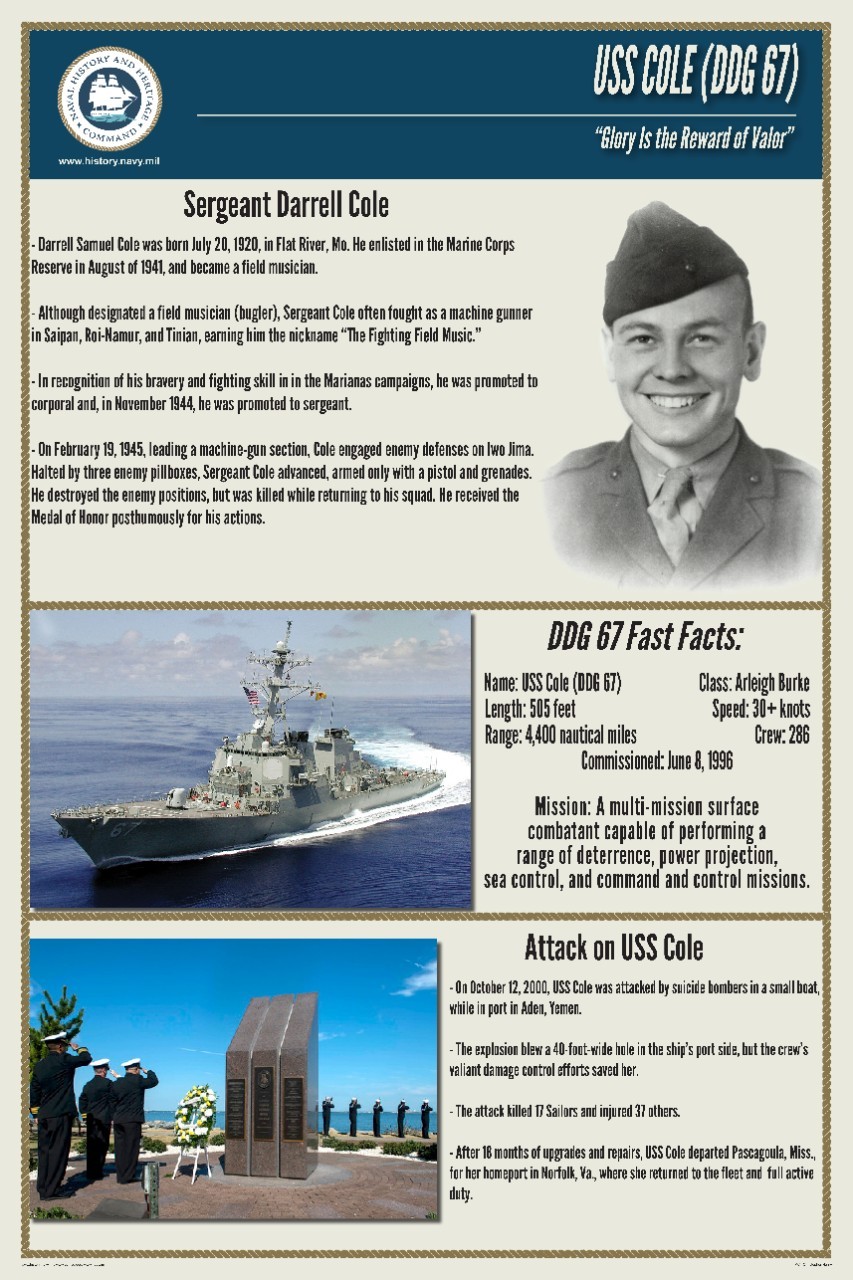 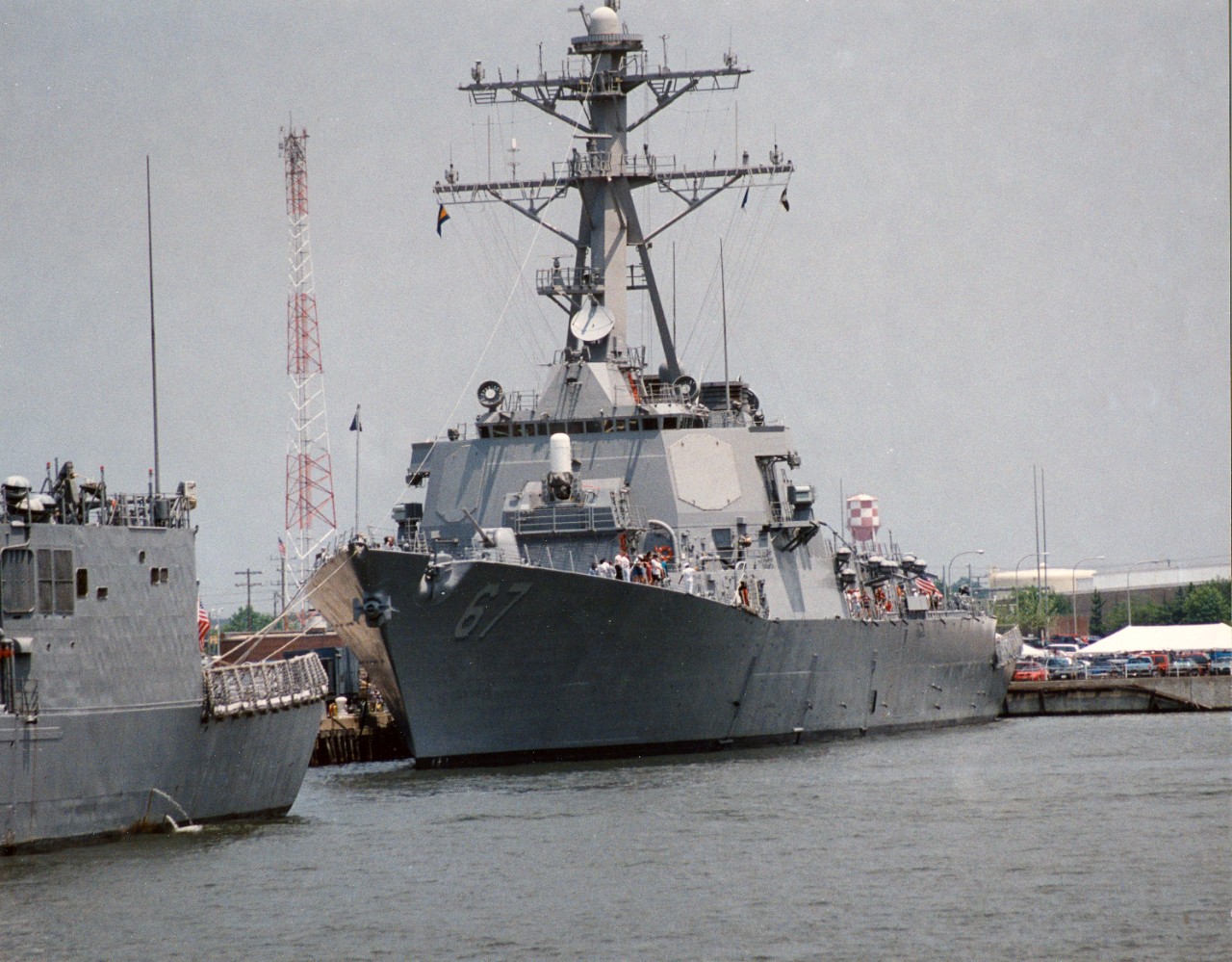 Port bow view of the latest Arleigh Burke class guided missile destroyer to join the fleet, the USS Cole (DDG-67), tied up at one of the destroyer and submarine (D & S) piers at the Norfolk Naval Base. (L45-54.10.02) 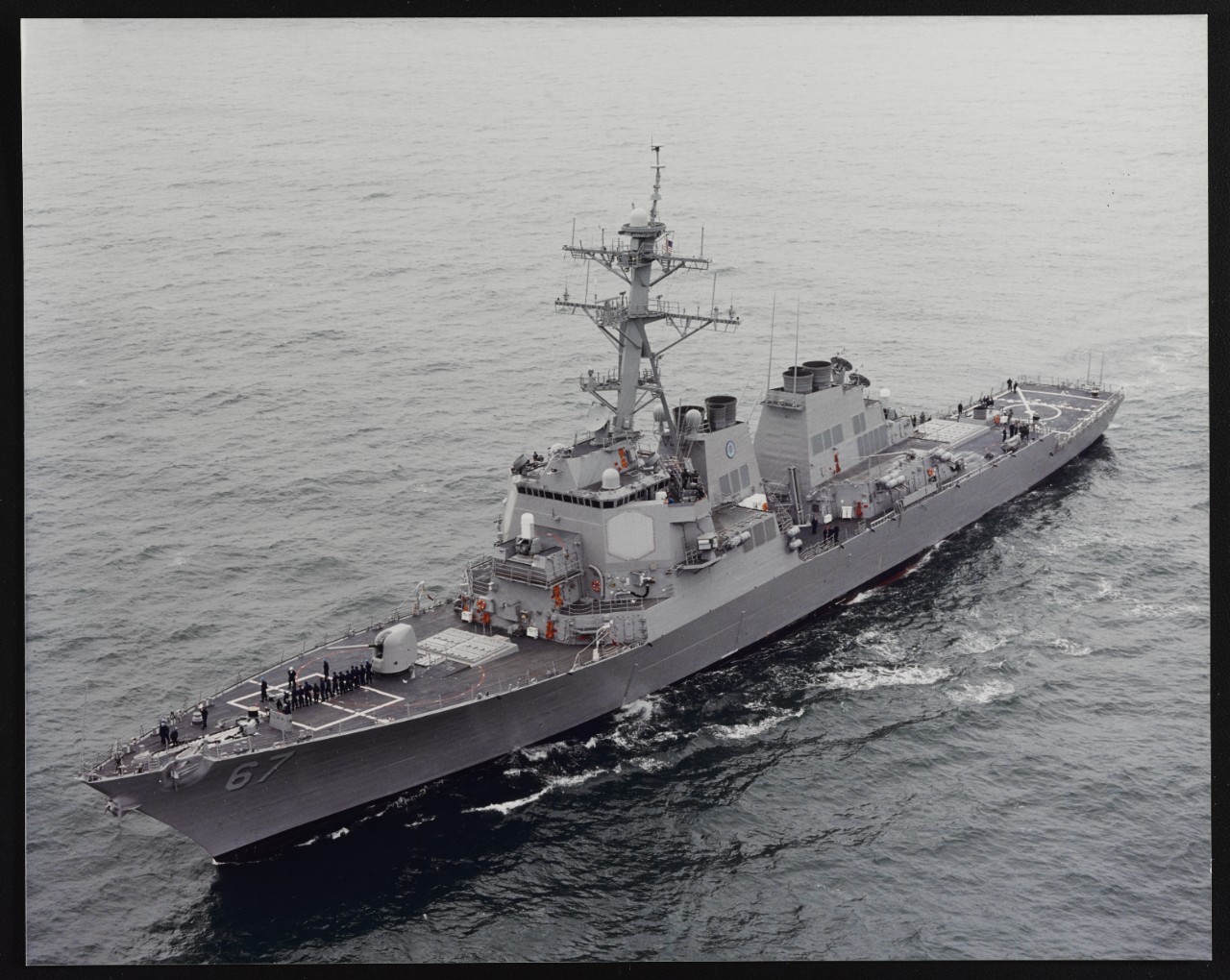 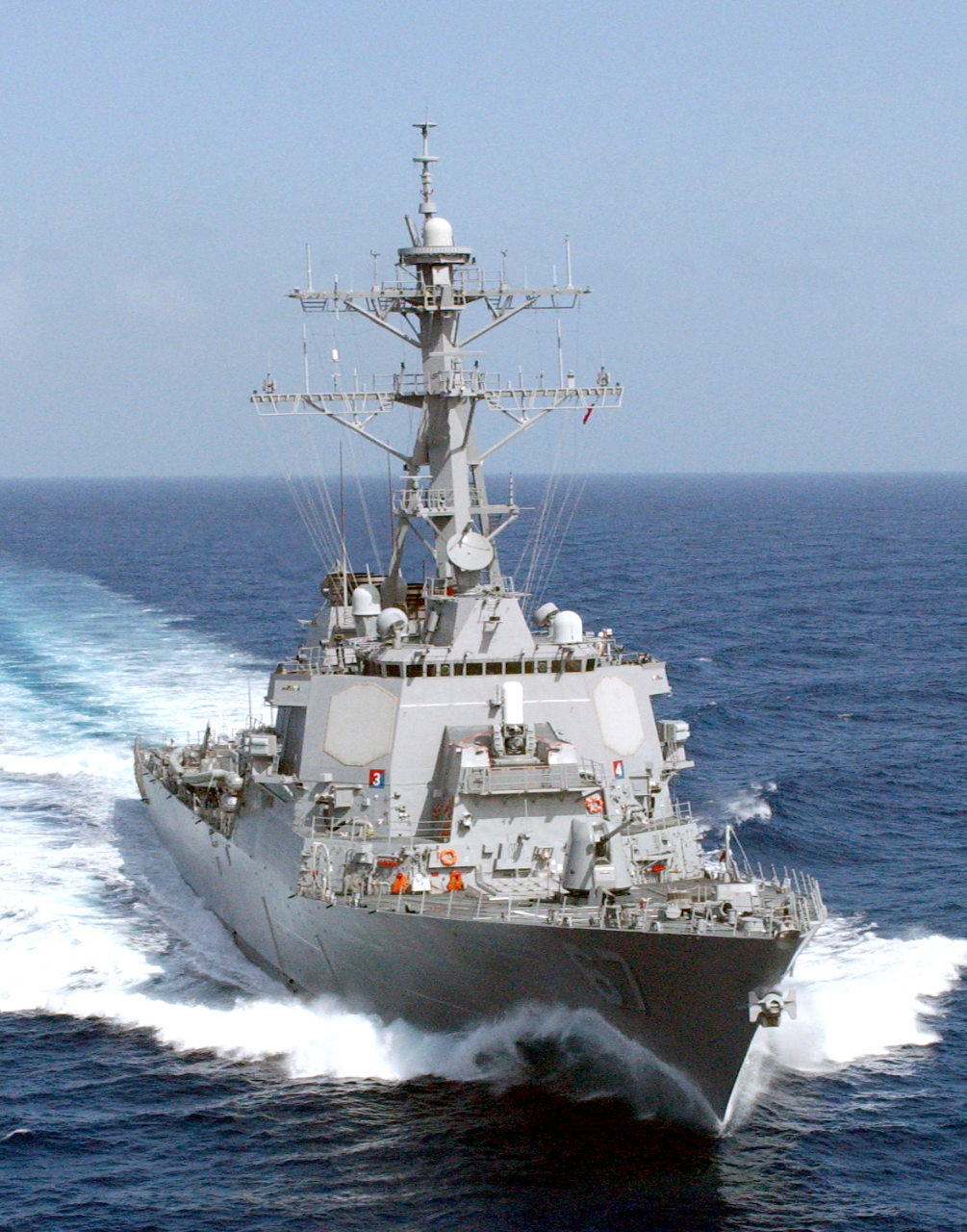 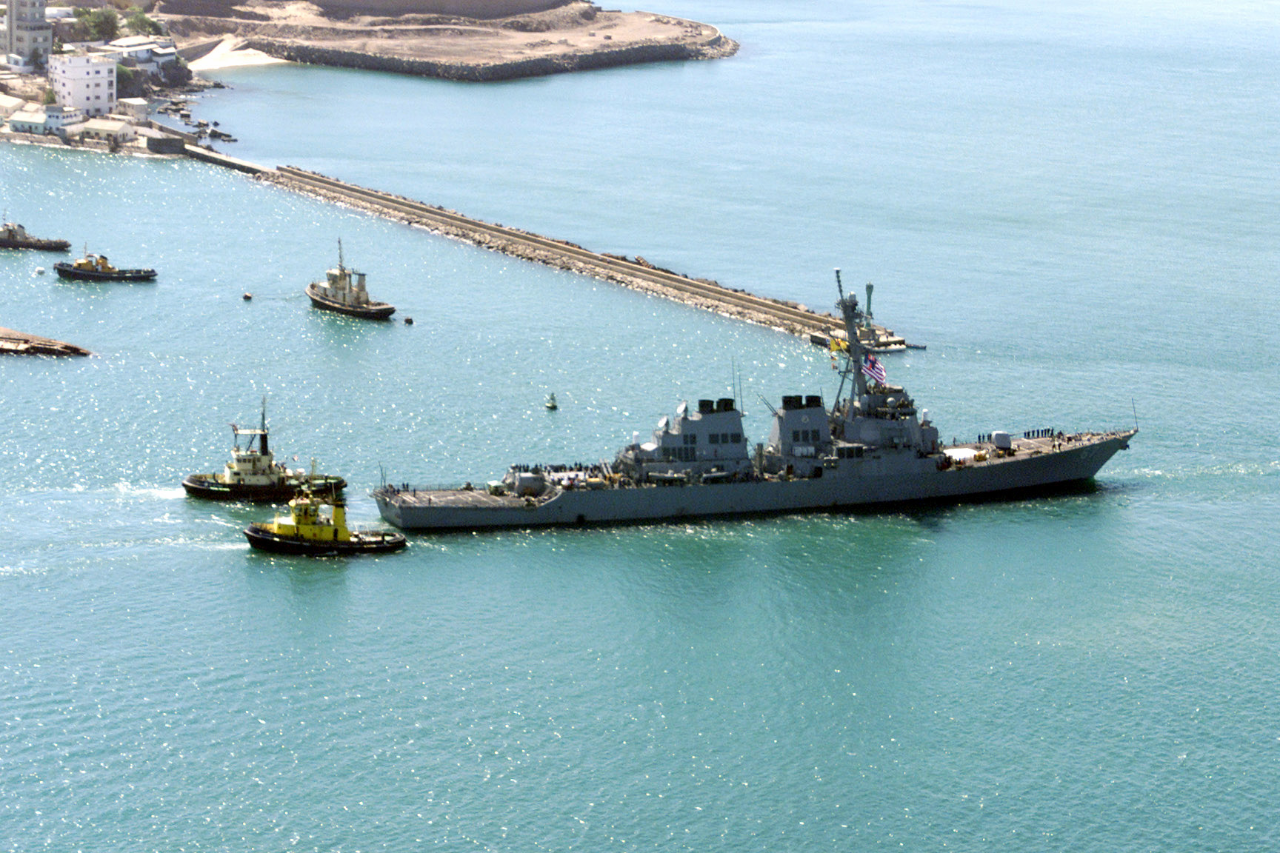 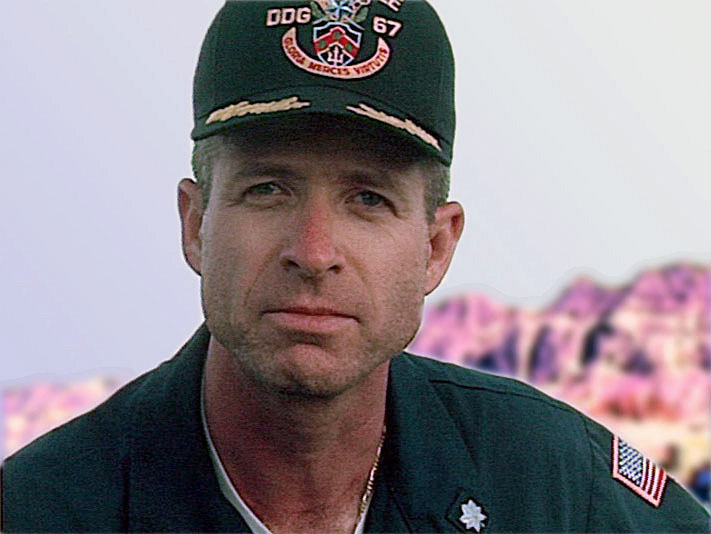 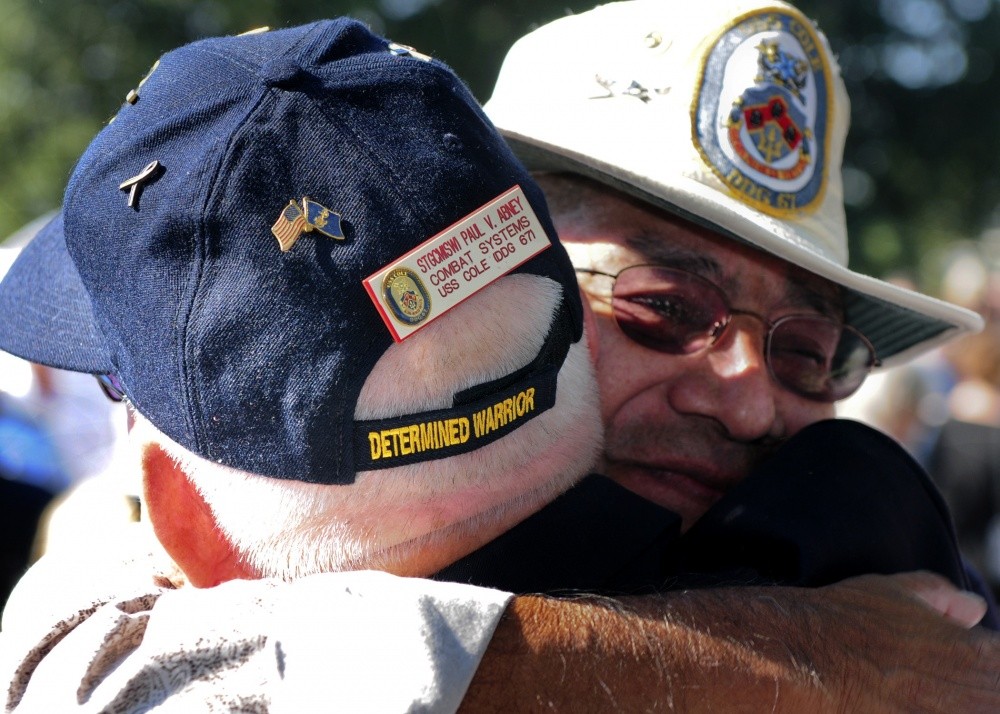 Former crew members of the guided-missile destroyer USS Cole embrace before the beginning of the tenth anniversary remembrance ceremony of the terrorist attack on Cole. The Norfolk-based ship was damaged by a suicide bombing while refueling in the Port of Aden in Yemen, killing 17 and wounding 39 Sailors. Cole returned to the fleet in 2002 and has deployed four times since the attack. (Photo by Lt.j.g. Michael Eric Quisao) 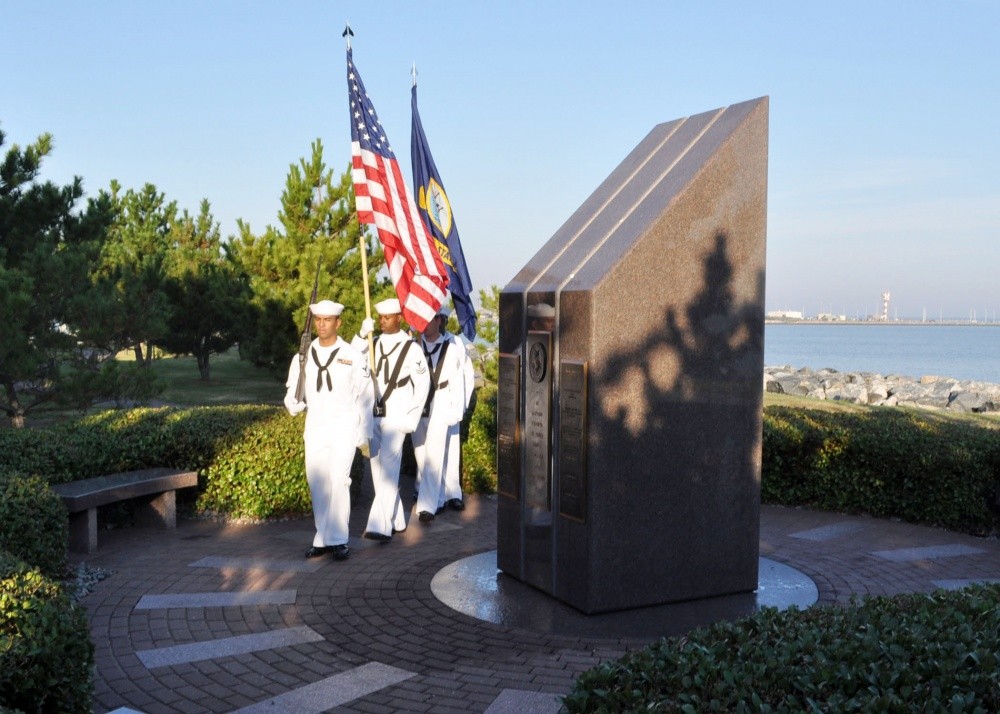 Members of a Navy honor guard from the guided-missile destroyer USS Cole practice rendering colors before a memorial service at the USS Cole Memorial at Naval Station Norfolk. The Norfolk-based ship was damaged by a suicide bombing while refueling in the Port of Aden in Yemen, killing 17 and wounding 39 Sailors. (Photo by Petty Officer 1st Class Julie Matyascik) 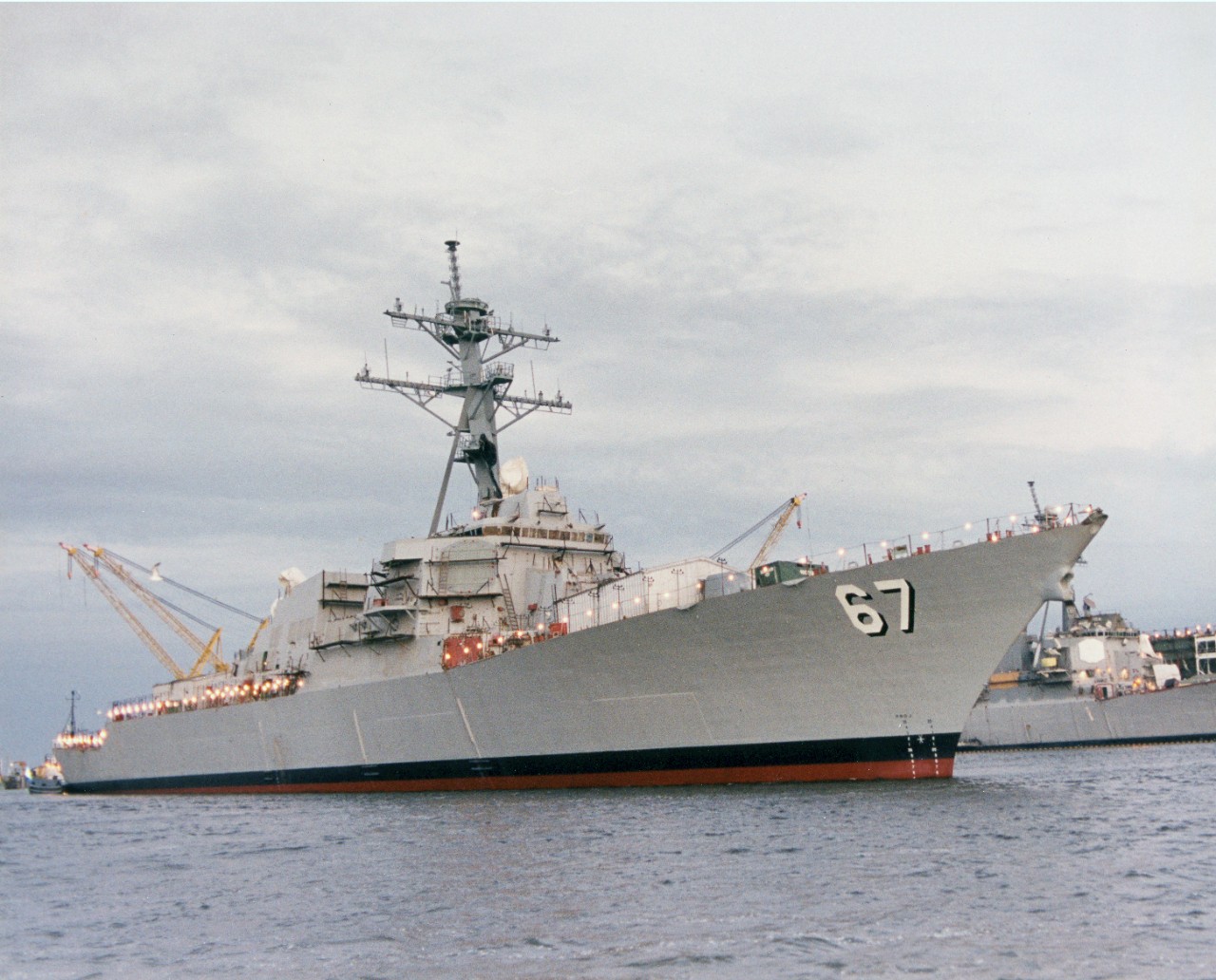 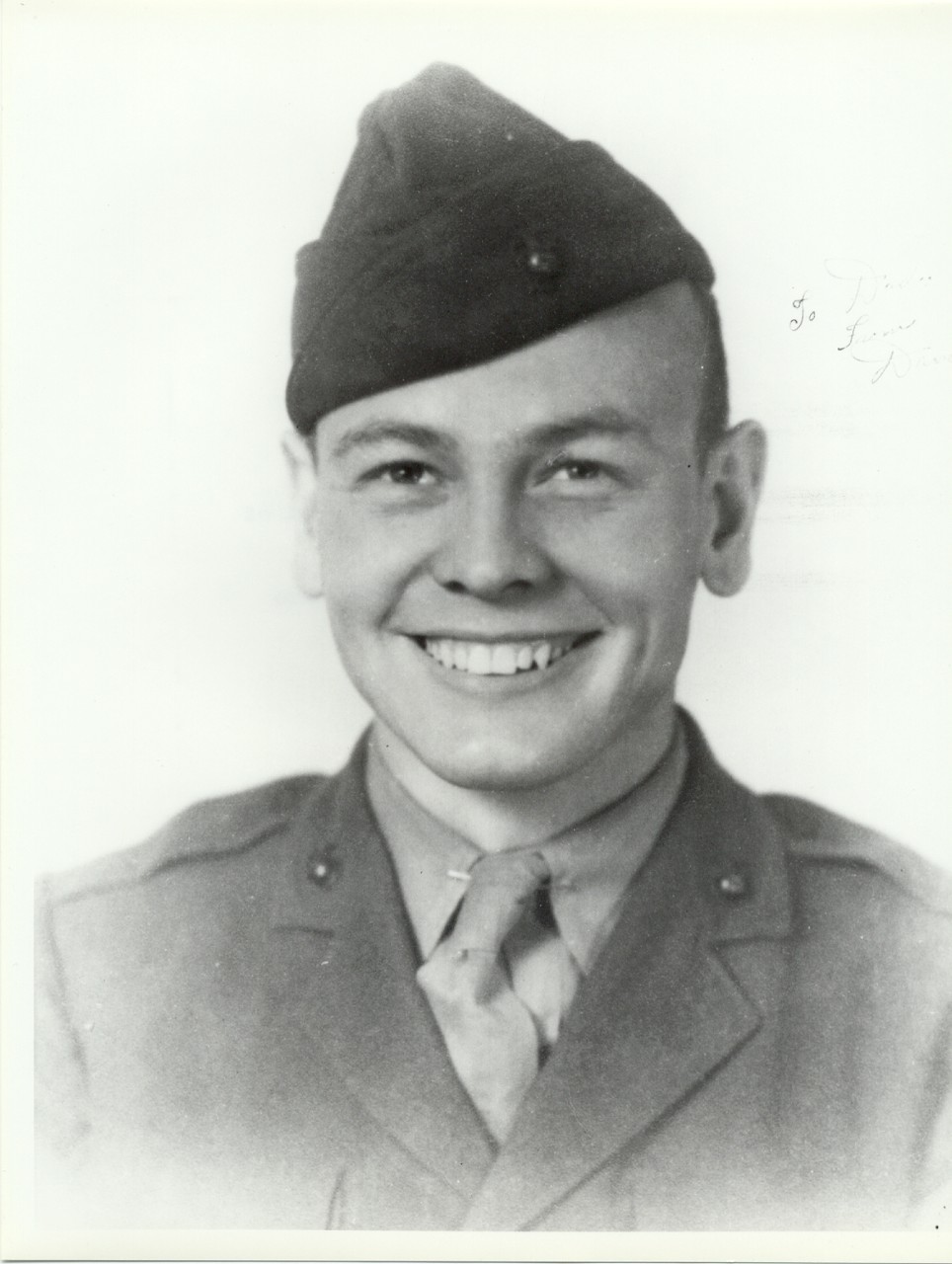 Sergeant Darrell S. Cole, USMCR. Darrell S. Cole received the Medal of Honor, posthumously, for conspicuous gallantry and intrepidity at the risk of his life on 19 February 1945, during the Battle of Iwo Jima. United States Marine Corps photo. Right click photo to download. 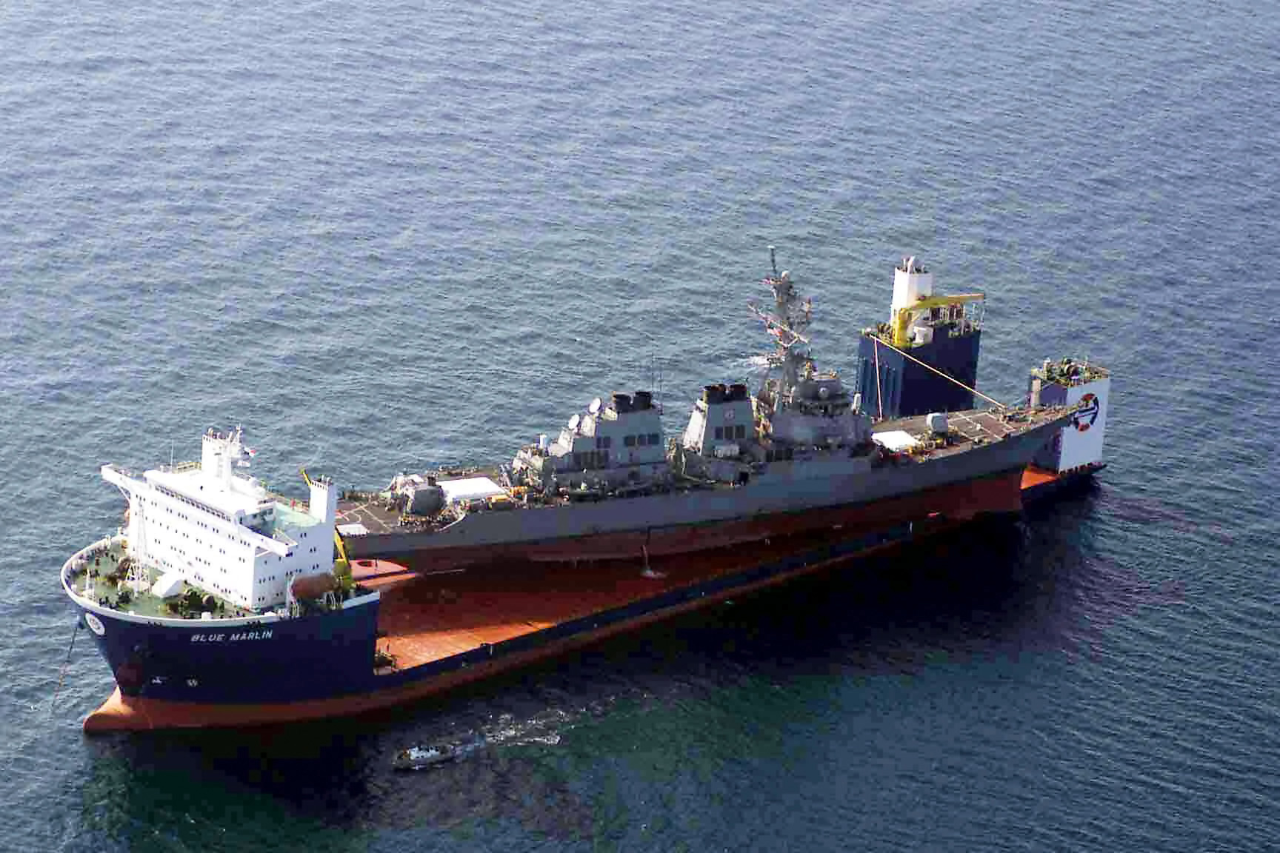 USS Cole is lifted by MV Blue Marlin, a Norwegian dry dock vessel, off the coast of Aden, Yemen on October 31, 2000. The American destroyer was bombed by suspected terrorists in the port of Aden, Yemen, October 12. Blue Marlin will transport the damaged warship back to the United States. (National Archives photo 6610002) 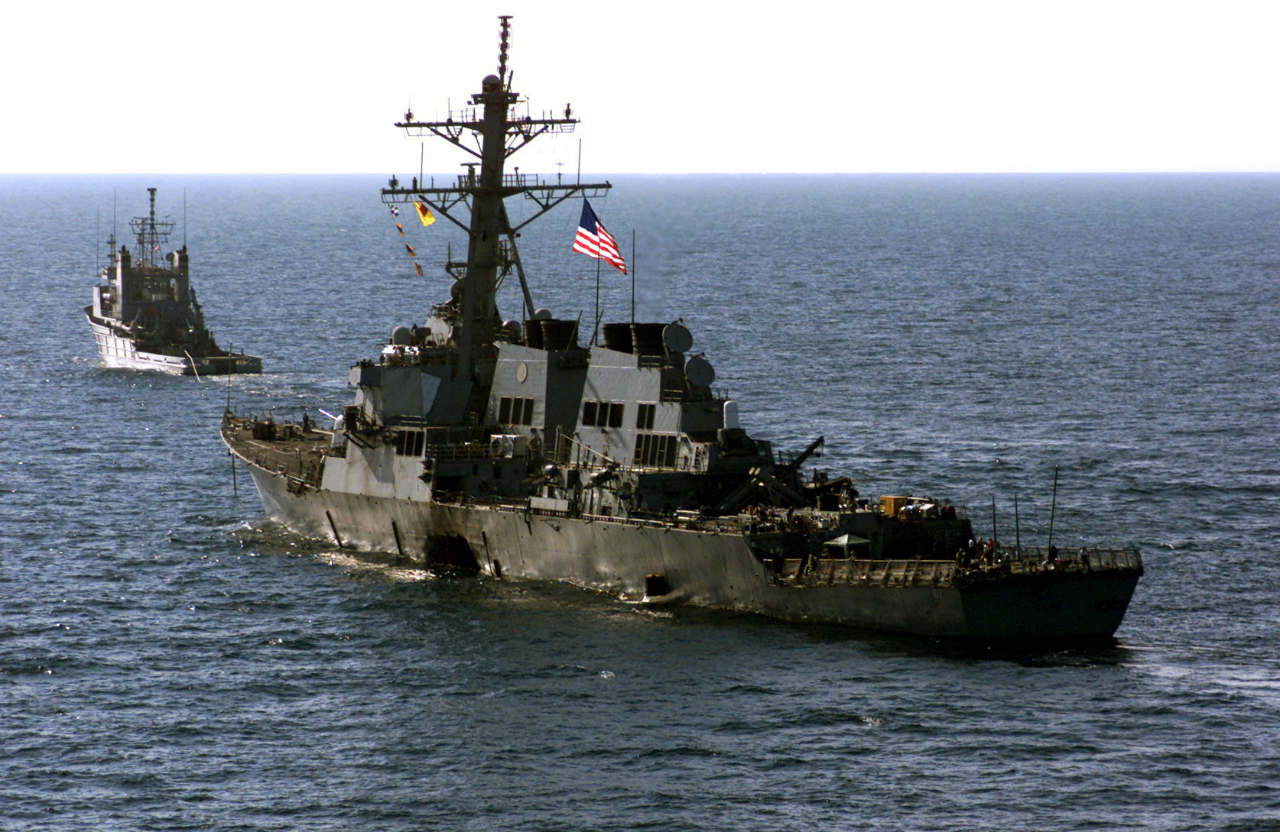 The crew of the Arleigh Burke-class USS Cole (DDG-67), escort their wounded ship aboard Navy tug vessel, USNS Catawba, to a staging point in the Yemeni harbor of Aden awaiting transportation by the Norwegian-owned semi-submersible heavy lift ship MV Blue Marlin back to their homeport, during Operation Determined Response, on October 29, 2000. (National Archives photo 6610001) 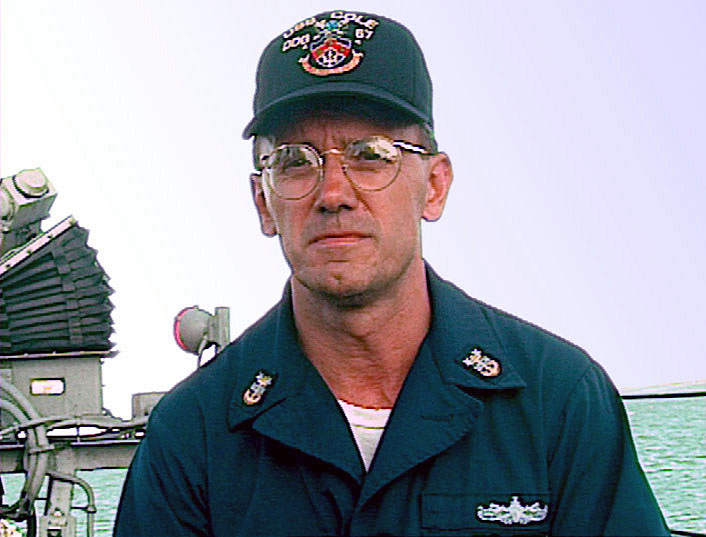 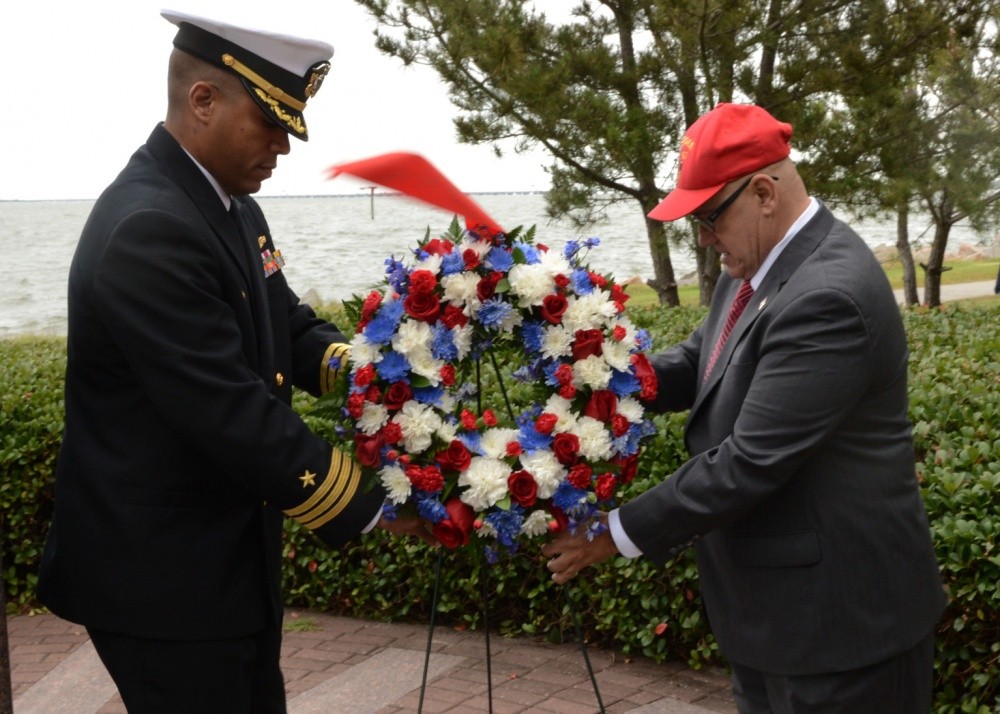 Cmdr. Mikal Phillips, USS Mason (DDG-87) commanding officer, and retired Command Master Chief James Parlier place a wreath at the Cole Memorial during USS Cole (DDG-67) commemoration at Naval Station Norfolk. Phillips was the fire control officer and Parlier was the CMC aboard during the attack. More than 150 former and current crew members, along with relatives, family members and naval officials, gathered together to pay tribute to the 17 Sailors killed and 39 wounded in the attack on the ship 14 years ago.(U.S. Navy photo by Mass Communication Specialist 3rd Class Amber O'Donovan/Released)