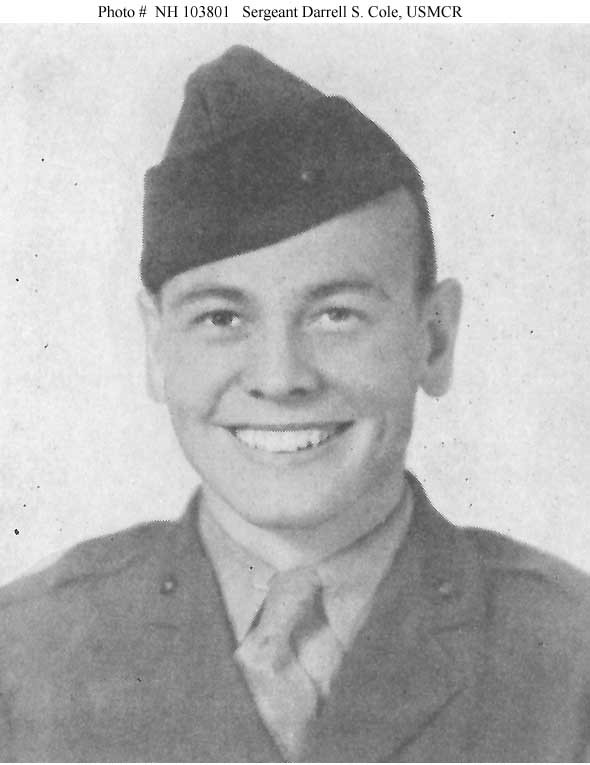 Description: Halftone reproduction of a photograph, copied from the official publication Medal of Honor, 1861-1949, The Navy, page 168. Darrell S. Cole received the Medal of Honor, posthumously, for conspicuous gallantry and intrepidity at the risk of his life on 19 February 1945, during the Battle of Iwo Jima. U.S. Naval History and Heritage Command Photograph.
Related Content

Medal of Honor citation of Sergeant Darrell Samuel Cole, USMCR (as printed in the official publication "Medal of Honor, 1861-1949, The Navy", page 168):

"For conspicuous gallantry and intrepidity at the risk of his life above and beyond the call of duty while serving as Leader of a Machine-gun Section of Company B, First Battalion, Twenty-third Marines, FOURTH Marine Division, in action against enemy Japanese forces during the assault on Iwo Jima in the Volcano Islands, 19 February 1945. Assailed by a tremendous volume of small-arms, mortar and artillery fire as he advanced with one squad of his section in the initial assault wave, Sergeant Cole boldly led his men up the sloping beach toward Airfield No. 1 despite the blanketing curtain of flying shrapnel and, personally destroying with hand grenades two hostile emplacements which menaced the progress of his unit, continued to move forward until a merciless barrage of fire emanating from three Japanese pillboxes halted the advance. Instantly placing his one remaining machine in action, he delivered a shattering fusillade and succeeded in silencing the nearest and most threatening emplacement before his weapon jammed and the enemy, reopening fire with knee mortars and grenades, pinned down his unit for the second time. Shrewdly gaging the tactical situation and evolving a daring plan of counterattack, Sergeant Cole, armed solely with a pistol and one grenade, coolly advanced alone to the hostile pillboxes. Hurling his one grenade at the enemy in sudden, swift attack, he quickly withdrew, returned to his own lines for additional grenades and again advanced, attacked and withdrew. With enemy guns still active, he ran the gantlet of slashing fire a third time to complete the total destruction of the Japanese strong point and the annihilation of the defending garrison in this final assault. Although instantly killed by an enemy grenade as he returned to his squad, Sergeant Cole had eliminated a formidable Japanese position, thereby enabling his company to storm the remaining fortifications, continue the advance, and seize the objective. By his dauntless initiative, unfaltering courage and indomitable determination during a critical period of action, Sergeant Cole served as an inspiration to his comrades, and his stout-hearted leadership in the face of almost certain death sustained and enhanced the highest tradition of the United States Naval Service. He gallantly gave his life for his country."