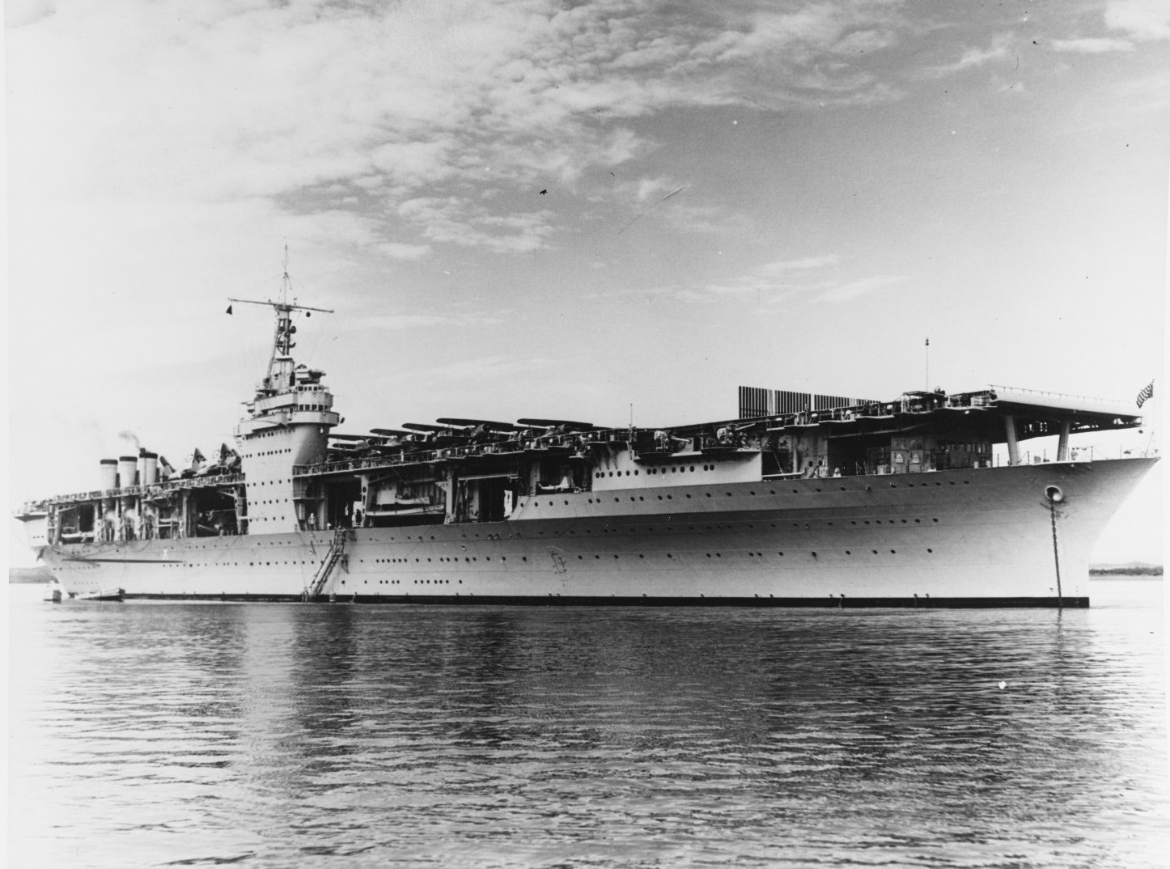 As the first and only ship of her class, USS Ranger (CV-4)—the first U.S. Navy ship designed and built from the keel up as an aircraft carrier—was commissioned at the Norfolk Navy Yard, Virginia, 4 June 1934, with Captain Arthur L. Bristol in command. After shakedown training that took her to Rio de Janeiro, Buenos Aires, and Montevideo, Ranger returned to Norfolk on 4 October for operations off the Virginia Capes until late March 1935 when she steamed for the Pacific. Transiting the Panama Canal on 7 April, Ranger arrived at San Diego, California, about a week later. For the next four years, Ranger participated in fleet problems reaching Hawaiian waters, and in western seaboard operations that took her as far south as Callao, Peru, and as far north as Seattle, Washington. On 4 January 1939, she departed San Diego for winter fleet operations in the Caribbean, then steamed north back to Norfolk arriving on 18 April.

In the fall of 1939, Ranger commenced neutrality patrols, operating out of Bermuda along the trade routes of the middle Atlantic and up the eastern seaboard steaming as far north as Argentia, Newfoundland. Ranger was headed back from the patrols when the Japanese attacked Pearl Harbor, on 7 December 1941. She arrived at Norfolk a day later, and on 21 December, commenced operations in the south Atlantic until the following year. On 22 March 1942, Ranger entered the Norfolk Navy Yard for repairs. The aircraft carrier served as flagship for Rear Admiral A. B. Cook, Commander, Carriers, Atlantic Fleet, until 6 April, when Rear Admiral Ernest D. McWhorter broke his flag in Ranger.

On 22 April, from Quonset Point, Rhode Island, Ranger, with 68 Army P-40 planes and personnel from the Army's 33rd Pursuit Squadron, was underway steaming southeast, and on 10 May, the Army squadron launched to land at Accra on the Gold Coast of Africa. Ranger subsequently returned to Quonset Point arriving on 28 May. She later conducted a patrol off Newfoundland, then stood out of Newport on 1 July with 72 Army P-40’s, which were also launched off the coast of Africa on 19 July. Ranger returned to Norfolk for local battle practice until 1 October, then based her training at Bermuda in company with four escort aircraft carriers that had been recently converted from tankers to meet the need for naval air power in the Atlantic.

As the only large carrier in the Atlantic Fleet, Ranger, in company with four Sangamon-class escort carriers, led the task force that provided air superiority during the amphibious invasion of Nazi Germany invaded French Morocco—operations commenced 8 November 1942. Early that morning, Ranger, who was about 30-miles northwest of Casablanca, began launching aircraft to three points on the Atlantic coast of North Africa. Nine of Ranger’s Grumman Wildcats attacked Rabat and Rabat-Sale airdromes, destroying seven enemy aircraft on one field and 14 bombers on another. Another attack group destroyed seven aircraft on Port Lyautey Field, while others strafed four French destroyers in Casablanca Harbor, and bombed nearby batteries. During the three-day operation, Ranger launched 496 combat sorties. Her aircraft scored two direct hits on French destroyer leader Albatros that wrecked the ships forward half and sank the ship. In addition, Ranger’s attack aircraft pounded French light cruiser Primauguet, dropped depth charges on two submarines, and knocked out coastal defense and anti- aircraft batteries. In all, Ranger’s aviation assets destroyed 70 enemy aircraft on the ground, shot down another 15 in aerial combat, immobilized 21 enemy tanks, and destroyed 86 military vehicles. Ranger lost just 16 of her aircraft during the entire operation. Casablanca fell to Allied forces on 11 November. Ranger departed the Moroccan coast the next day, arriving in Norfolk on 23 November.

Following training in the Chesapeake Bay, Ranger underwent overhaul at Norfolk from 16 December to 7 February 1943. After work was complete, she transported 75 P-40-L Army pursuit planes to Africa. She then patrolled and trained pilots along the New England coast steaming as far north as Halifax, Nova Scotia. On 11 August, she departed Halifax to join the British Home Fleet at Scapa Flow, Scotland, arriving 19 August. While there, Ranger patrolled the approaches to the British Isles.

On 2 October, Ranger departed Scapa Flow to attack German shipping in the Norwegian port of Bodo. Before dawn on 4 October, the task force reached launch position off Vestfjord completely undetected. Shortly thereafter, Ranger launched 20 Dauntless dive bombers and an escort of eight Wildcat fighters. A group of the dive bombers attacked the 8,000-ton freighter La Plata, while the rest continued north to attack a German convoy, who subsequently severely damaged a 10,000-ton tanker and a smaller troop transport. In addition, they sank two German merchantmen. A second attack group launched from the deck of Ranger—10 Avengers and six Wildcats—destroyed an enemy freighter and a small coaster and bombed a troop transport ship. During the operation, only three of Ranger’s aircraft were lost to antiaircraft fire. Later that afternoon, the Germans finally located Ranger, but of the three enemy aircraft that attacked, two were shot down and the other was chased away. Ranger returned to Scapa Flow on 6 October.

While in company with the British, Ranger patrolled in the waters of Iceland for about a month-and-a-half, and then departed Hvalfjord for Boston arriving on 4 December. One month later, Ranger was designated a training carrier operating out of Quonset Point. The temporary duty was interrupted on 20 April when she arrived at Staten Island, New York, to load 76 P-38 fighter planes together with Army, Navy, and French naval personnel for transport to Casablanca. Ranger arrived at her destination on 4 May, loaded aircraft destined for stateside repairs, embarked military personnel for the return to New York, and arrived on 16 May.

After delivering the equipment and personnel, Ranger entered the Norfolk Navy Yard to have her flight deck strengthened and for the installation of a new type of catapult, radar, and associated gear that provided the ship with the capacity to conduct night fighter interceptor training. On 11 July, Ranger departed Norfolk, transited the Panama Canal five days later, and arrived in San Diego on 25 July. After unloading more than 1,000 passengers and the aircraft of Night Fighting Squadron 102, she steamed for Hawaiian waters reaching Pearl Harbor on 3 August. For the next several months, Ranger conducted night carrier training operations out of “Pearl.” She departed on 18 October for San Diego. Ranger remained in San Diego training air groups and squadrons along the California coast for the duration of the war.

On 30 September 1945, Ranger embarked civilian and military passengers, then steamed for New Orleans, arriving 18 October. Following Navy Day celebrations in “The Big Easy,” Ranger was underway for the U.S. east coast making several stops before she entered the Philadelphia Naval Shipyard, 18 November, for overhaul. The ship remained on the eastern seaboard until she was decommissioned at Norfolk, 18 October 1946. 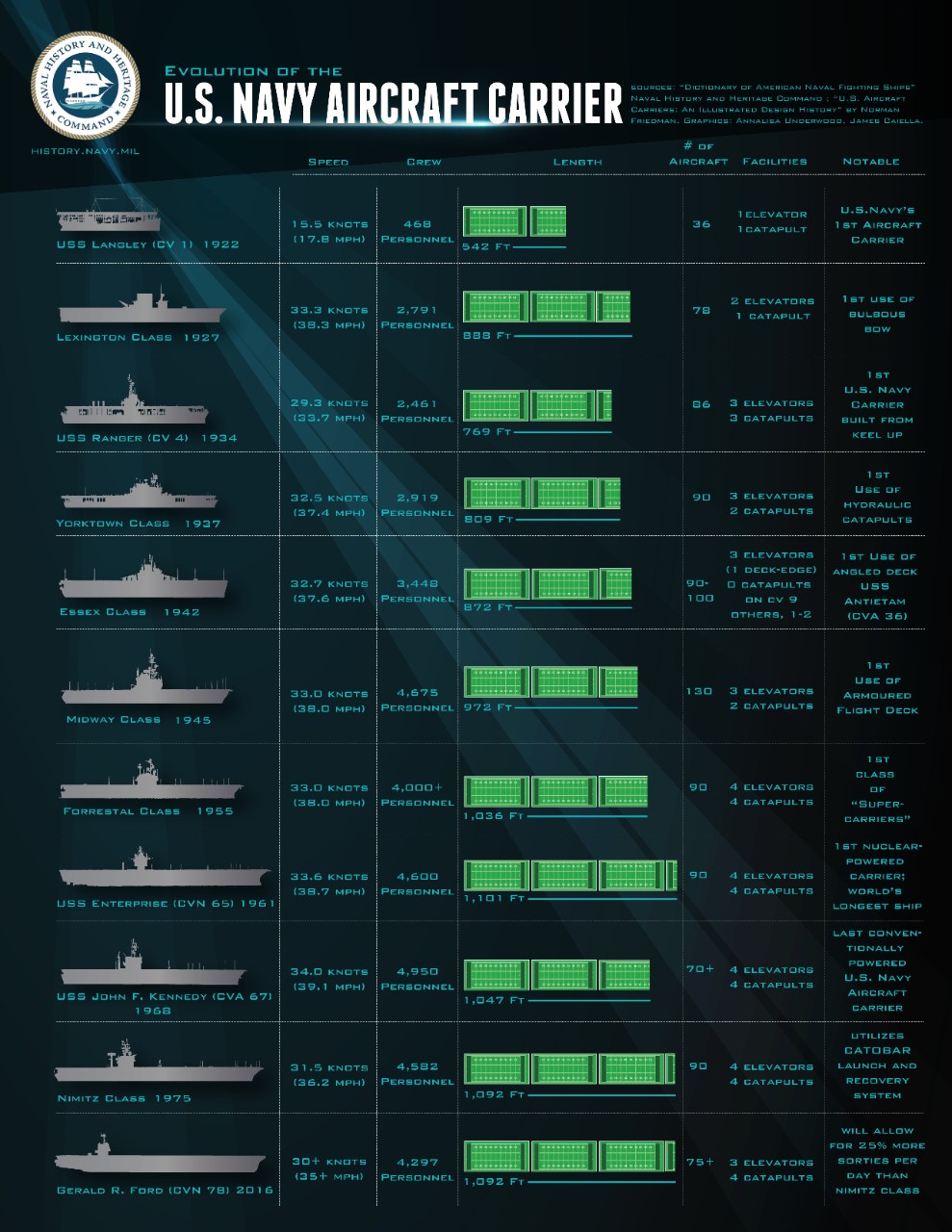 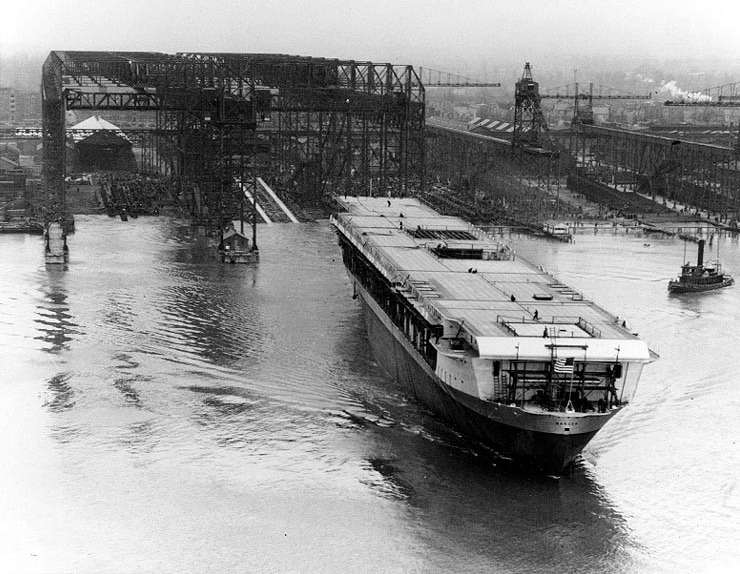 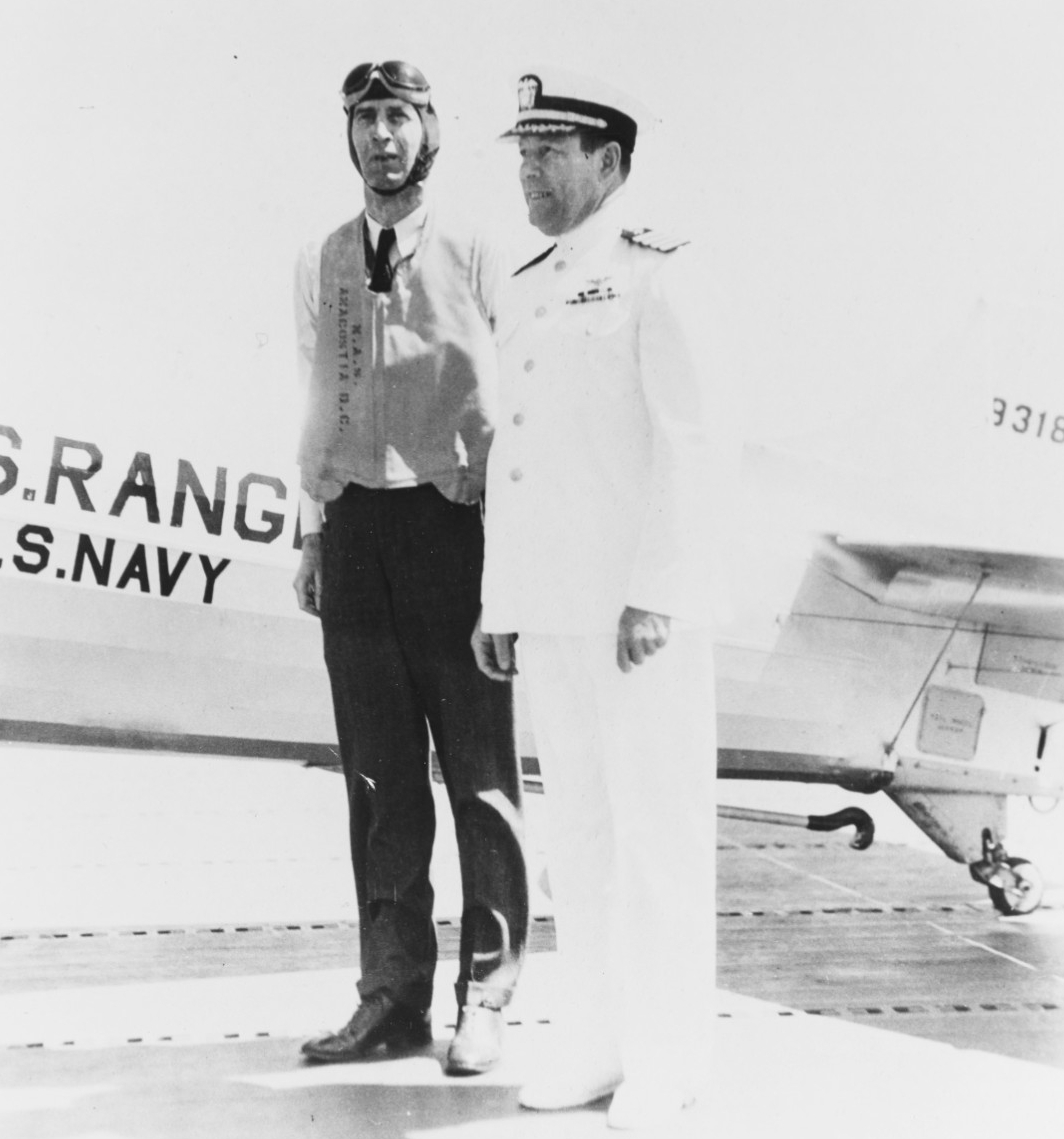 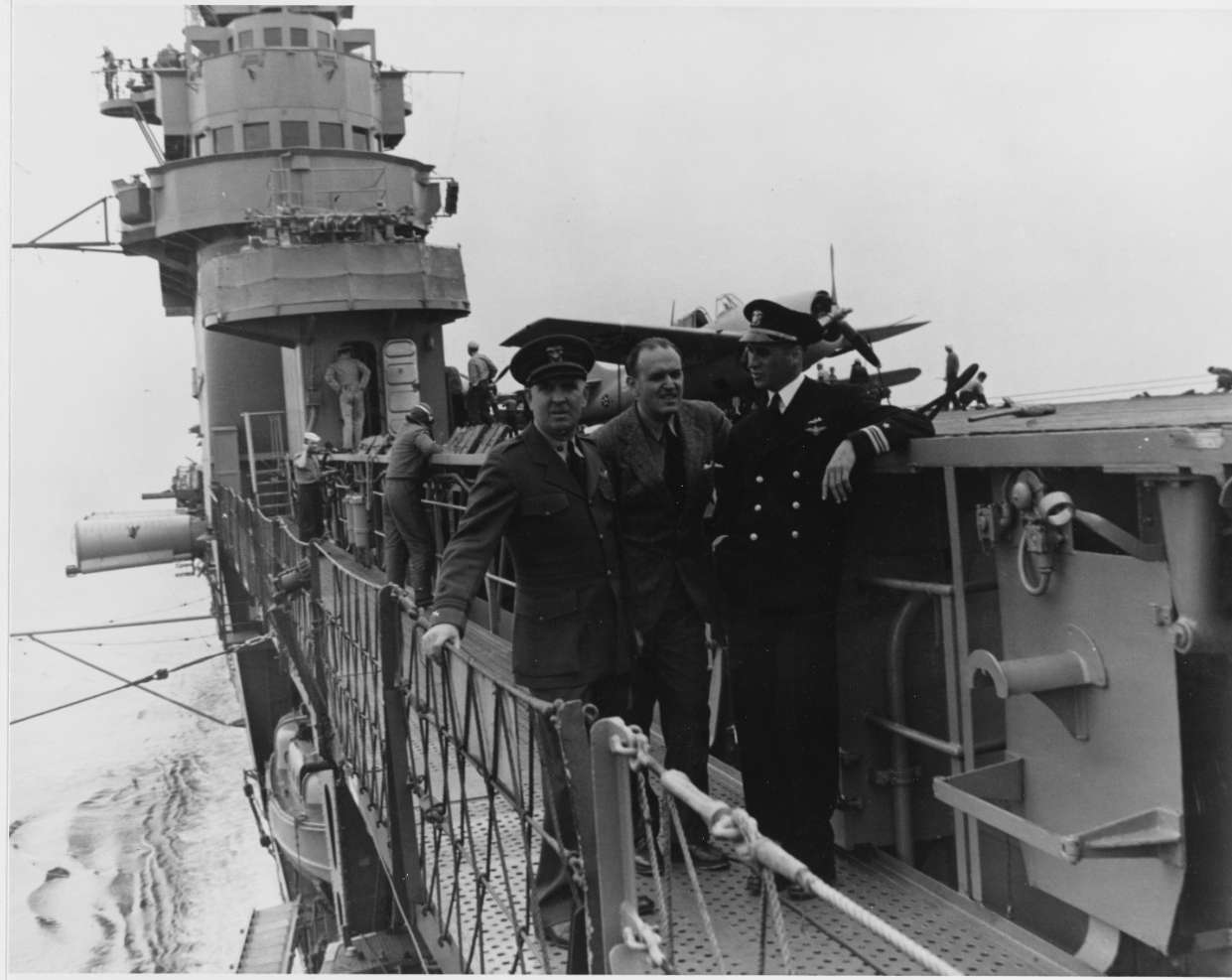 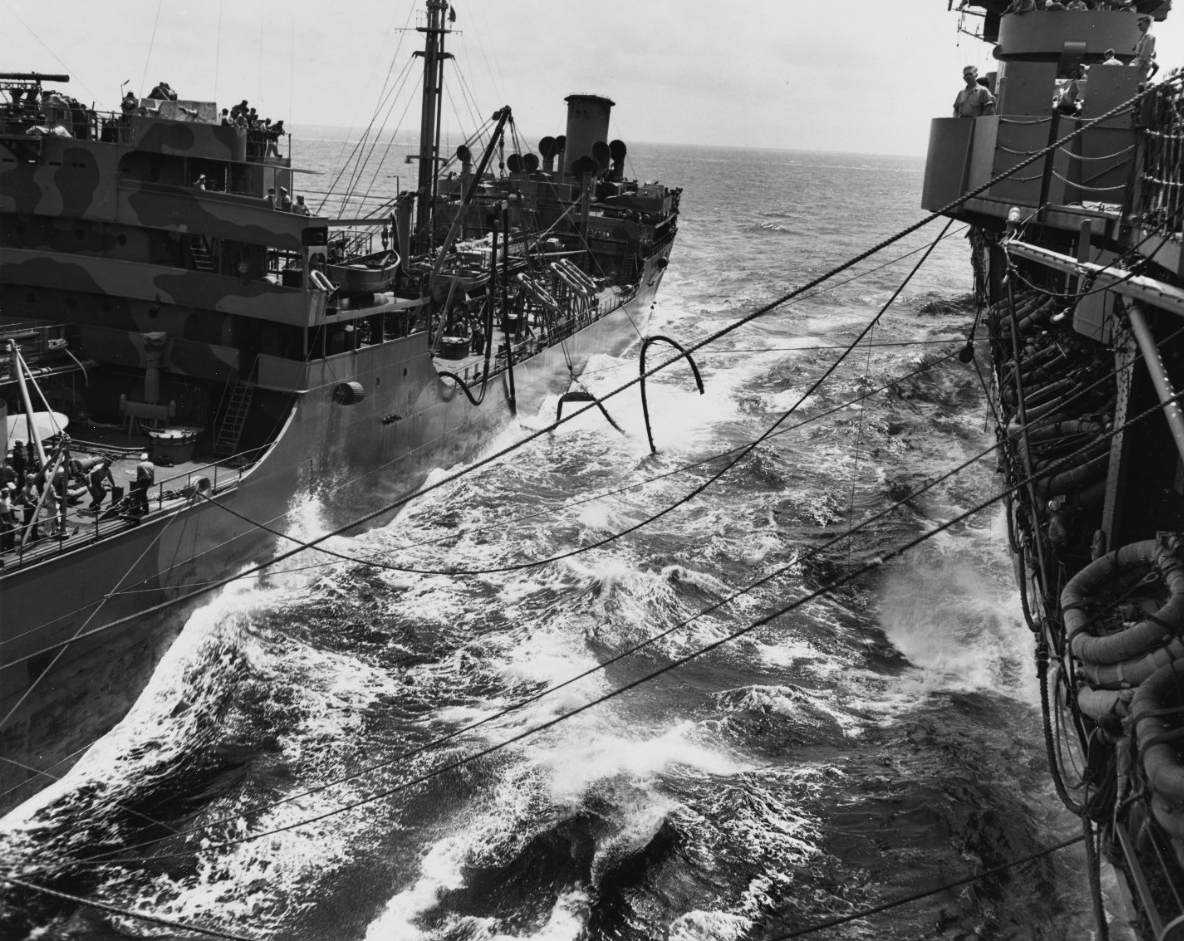 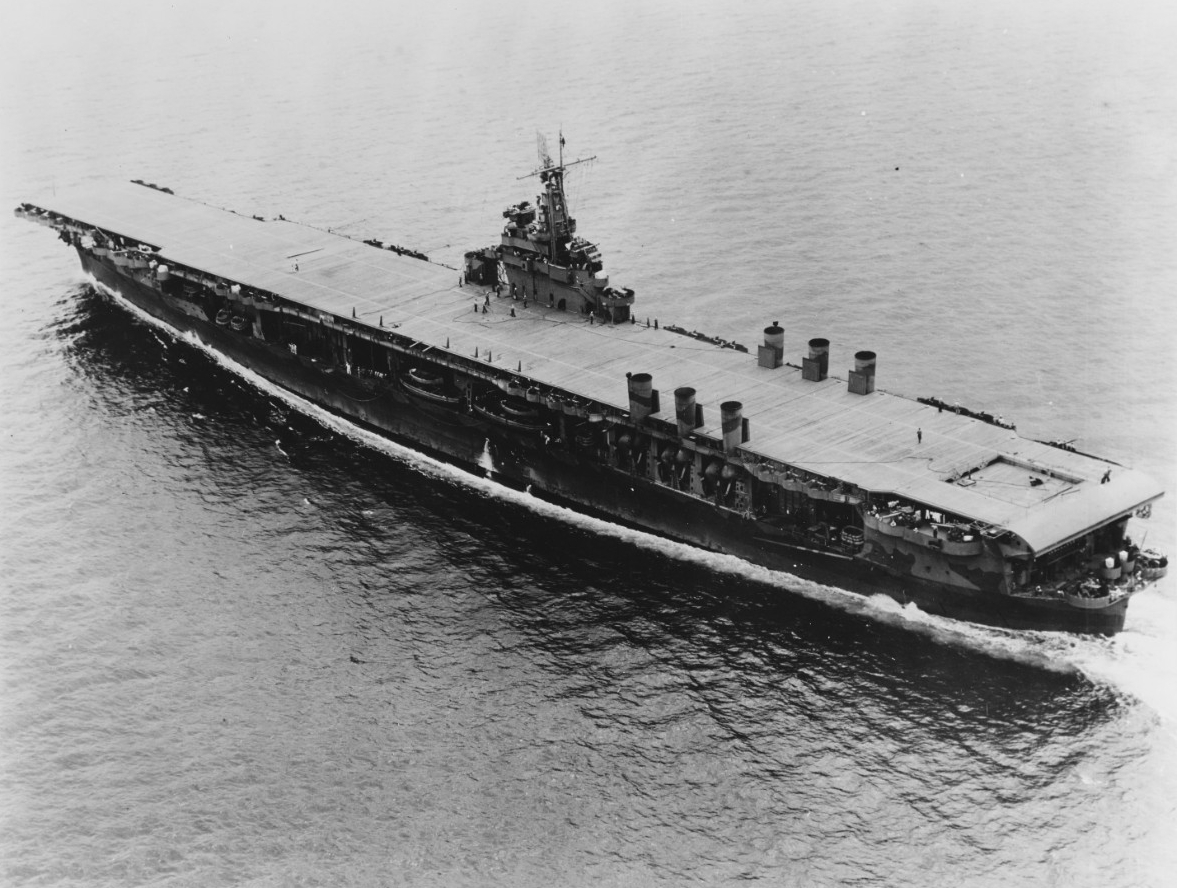 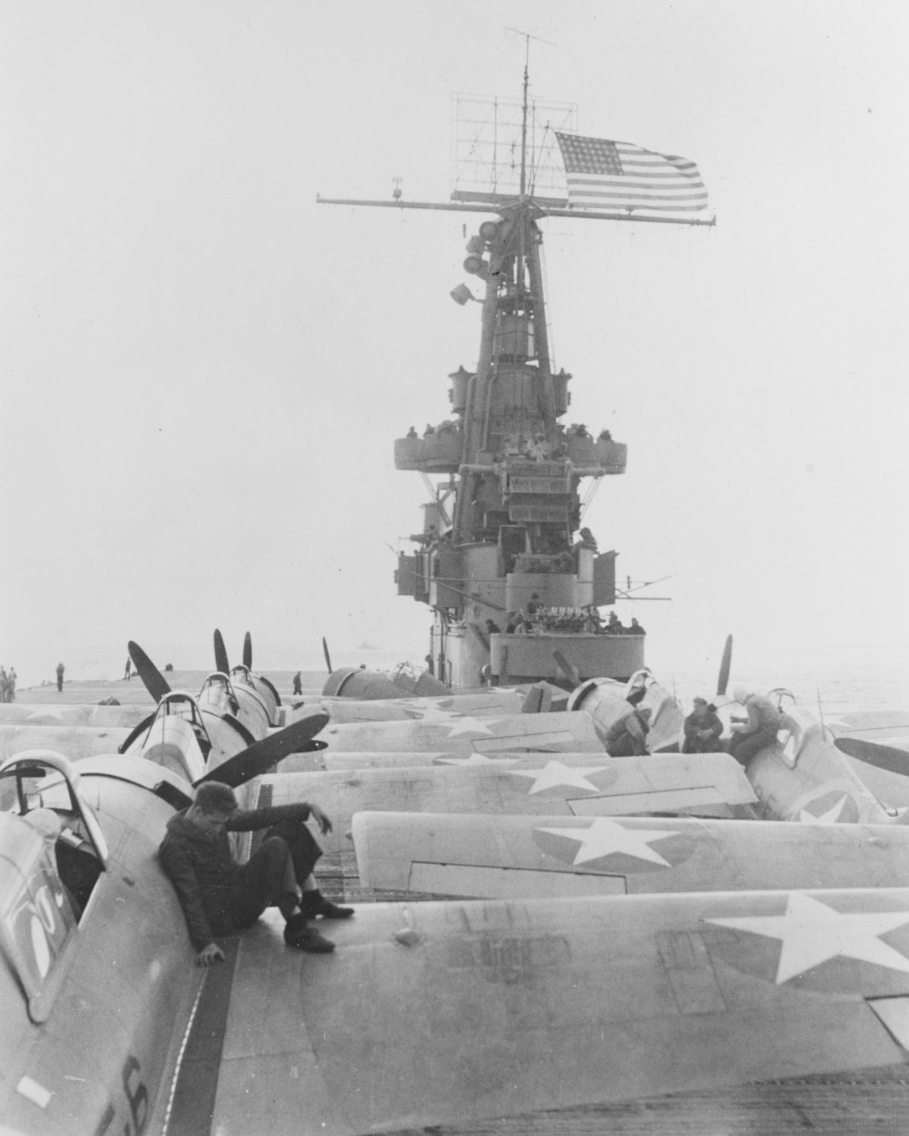 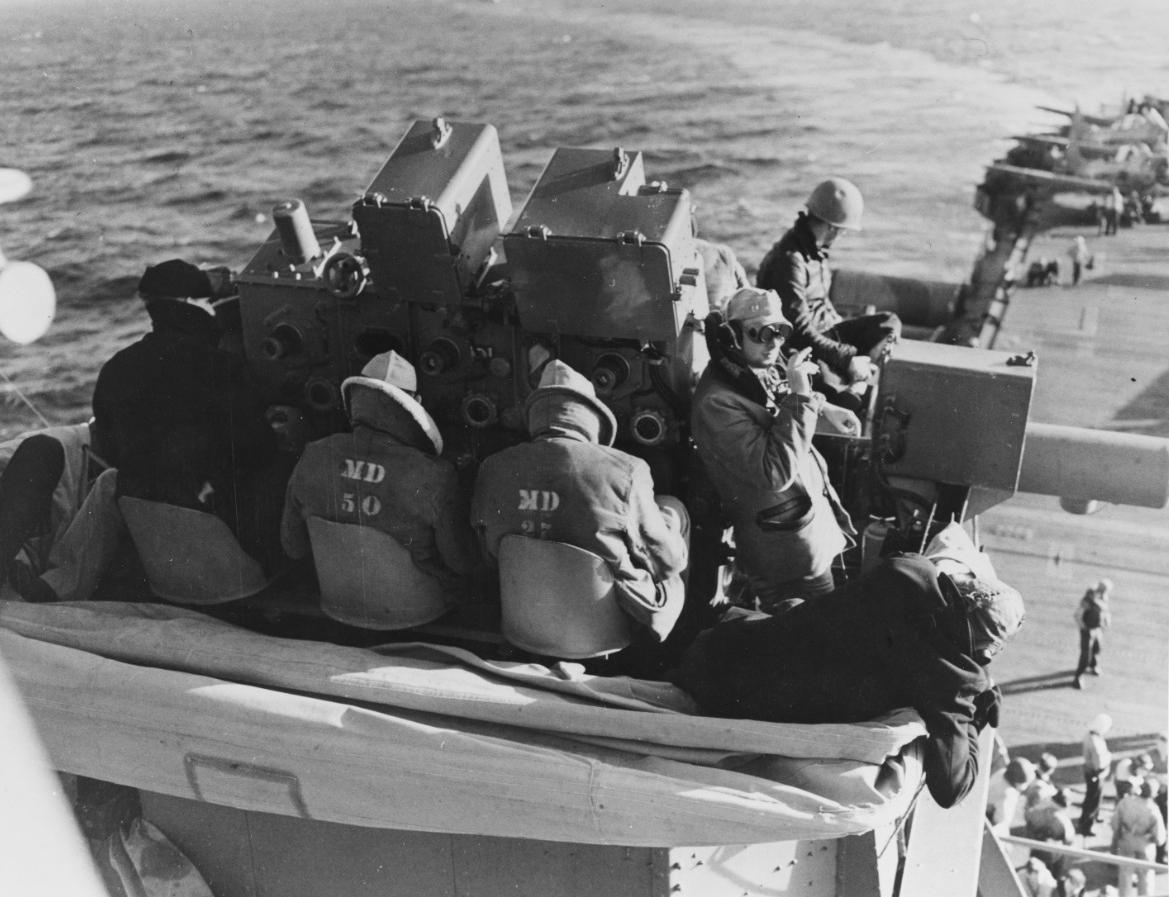 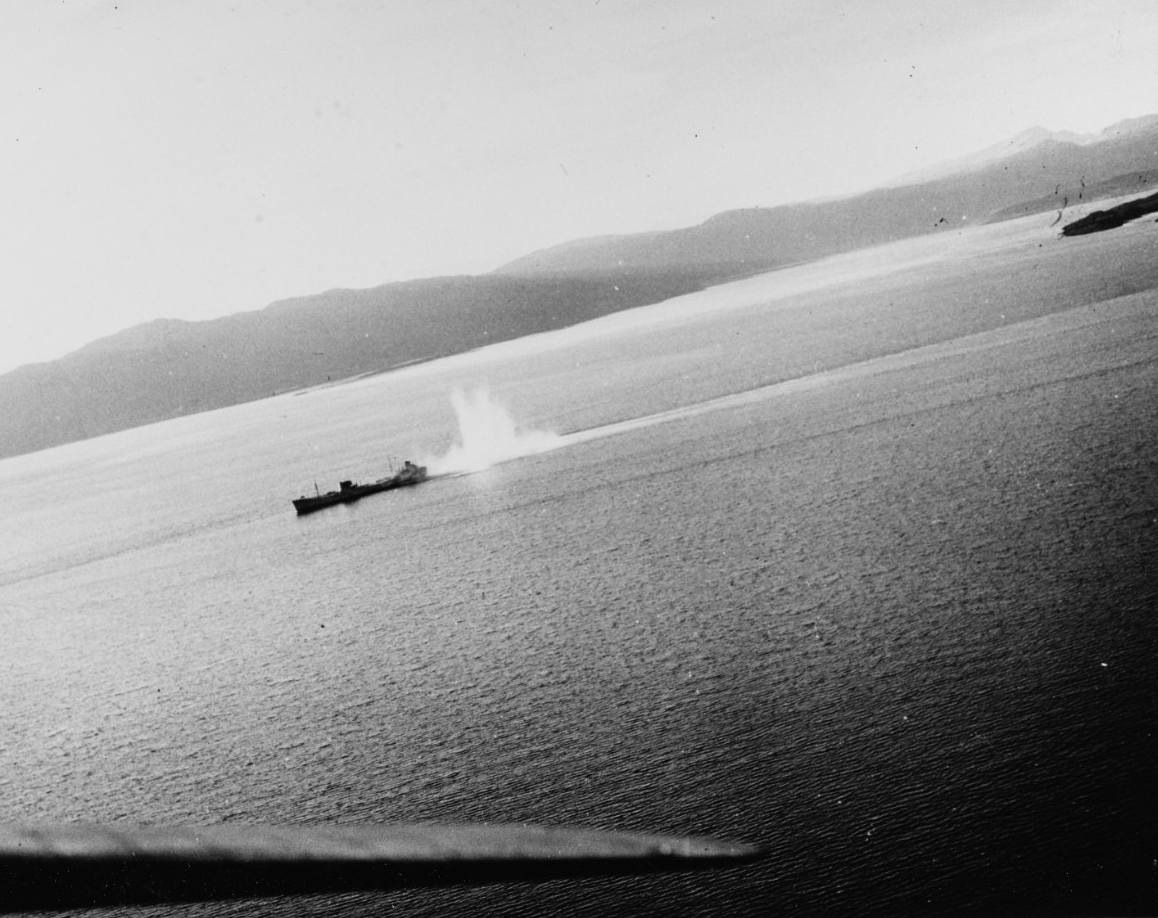 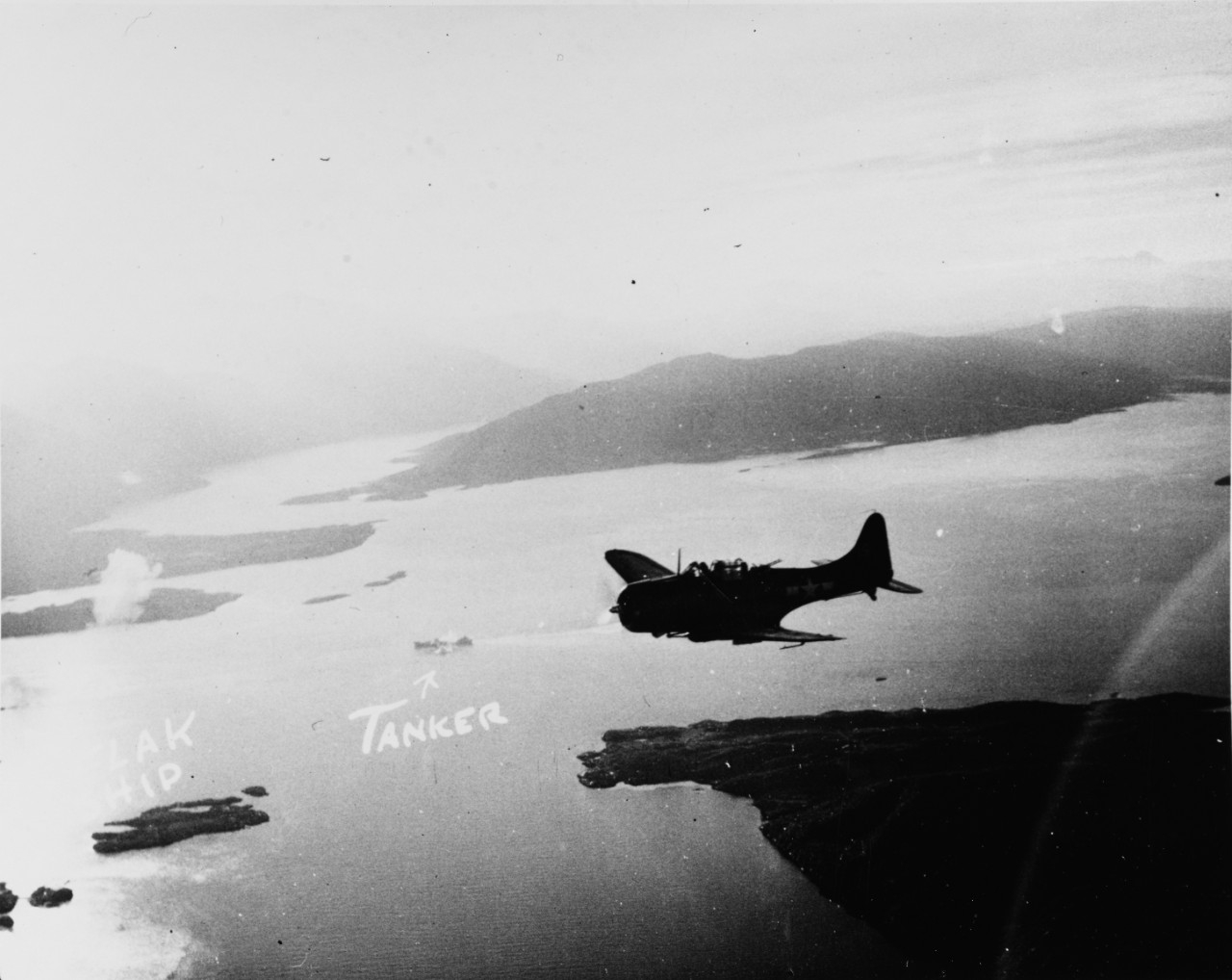 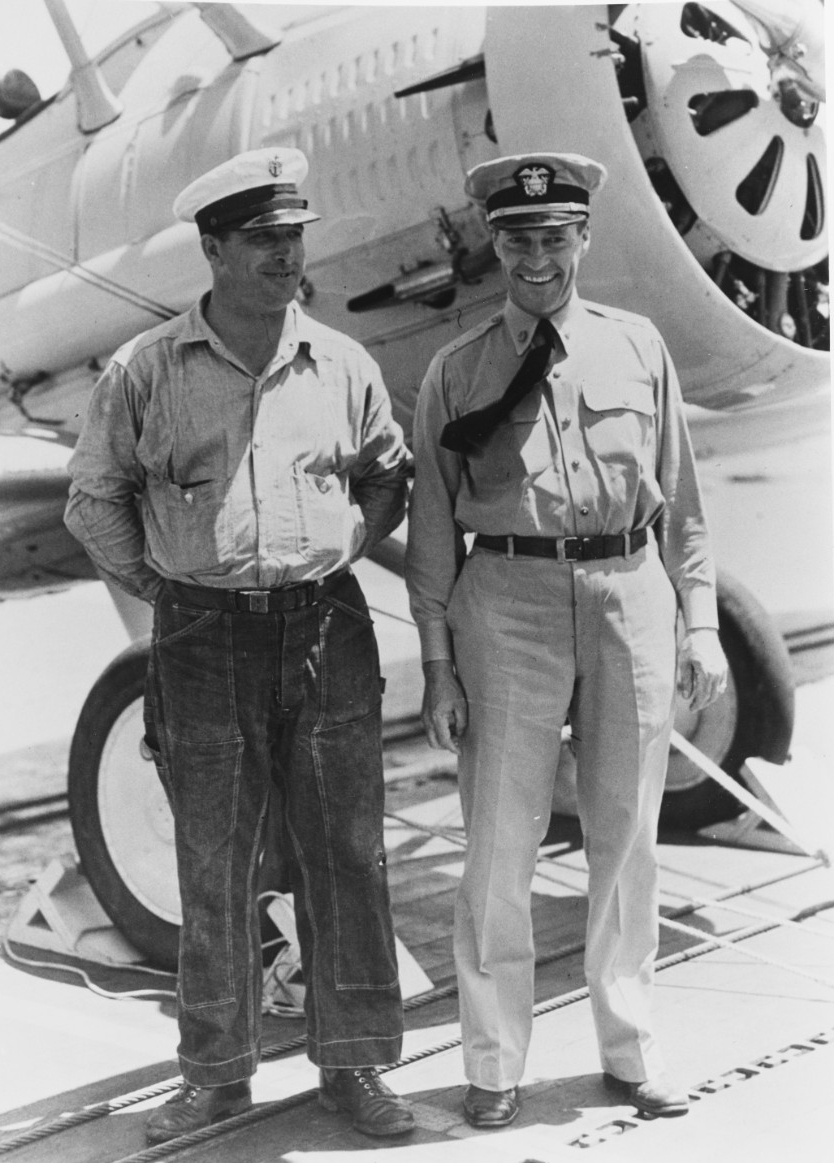 Lieutenant Commander Arthur C. Davis (right) and Aviation Chief Machinist Mate H.E. Wallace stood in front of the aircraft that made the first landing on board Ranger (CV-4), 21 June 1934. The aircraft was a Vought 03U-3 (BuNo 9318). National Archives photograph, 80-G-391499. 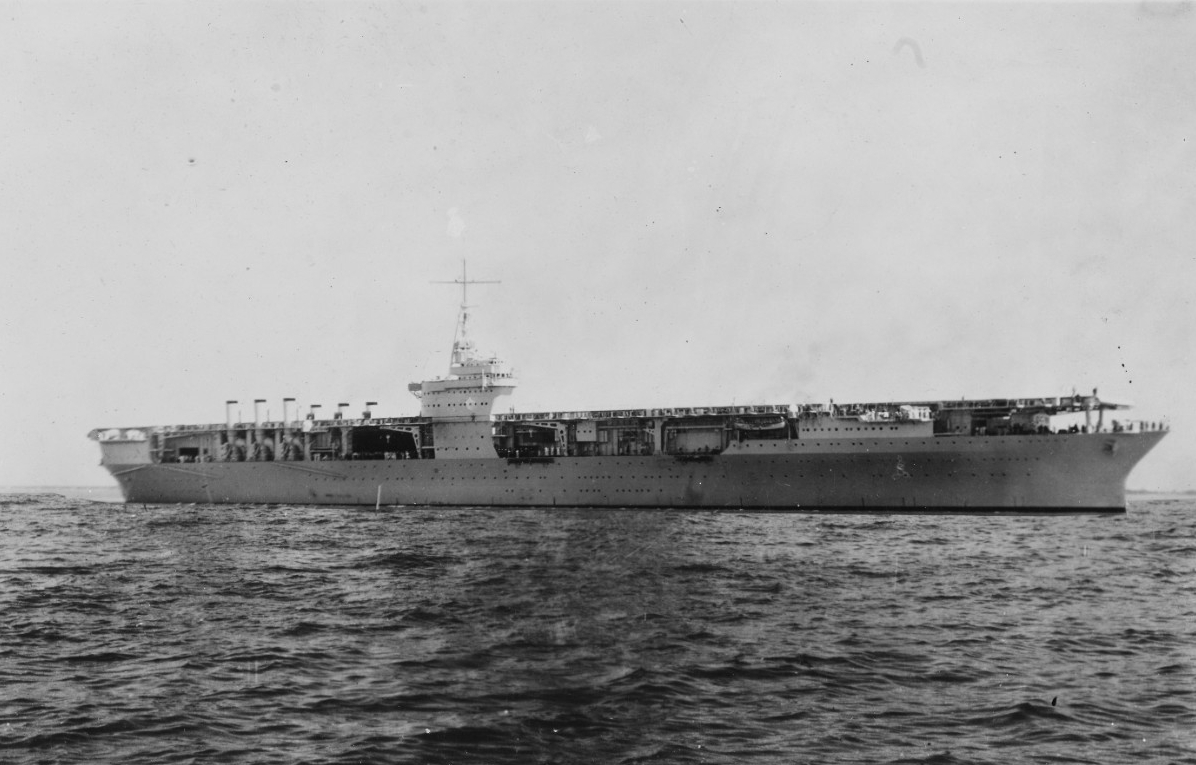 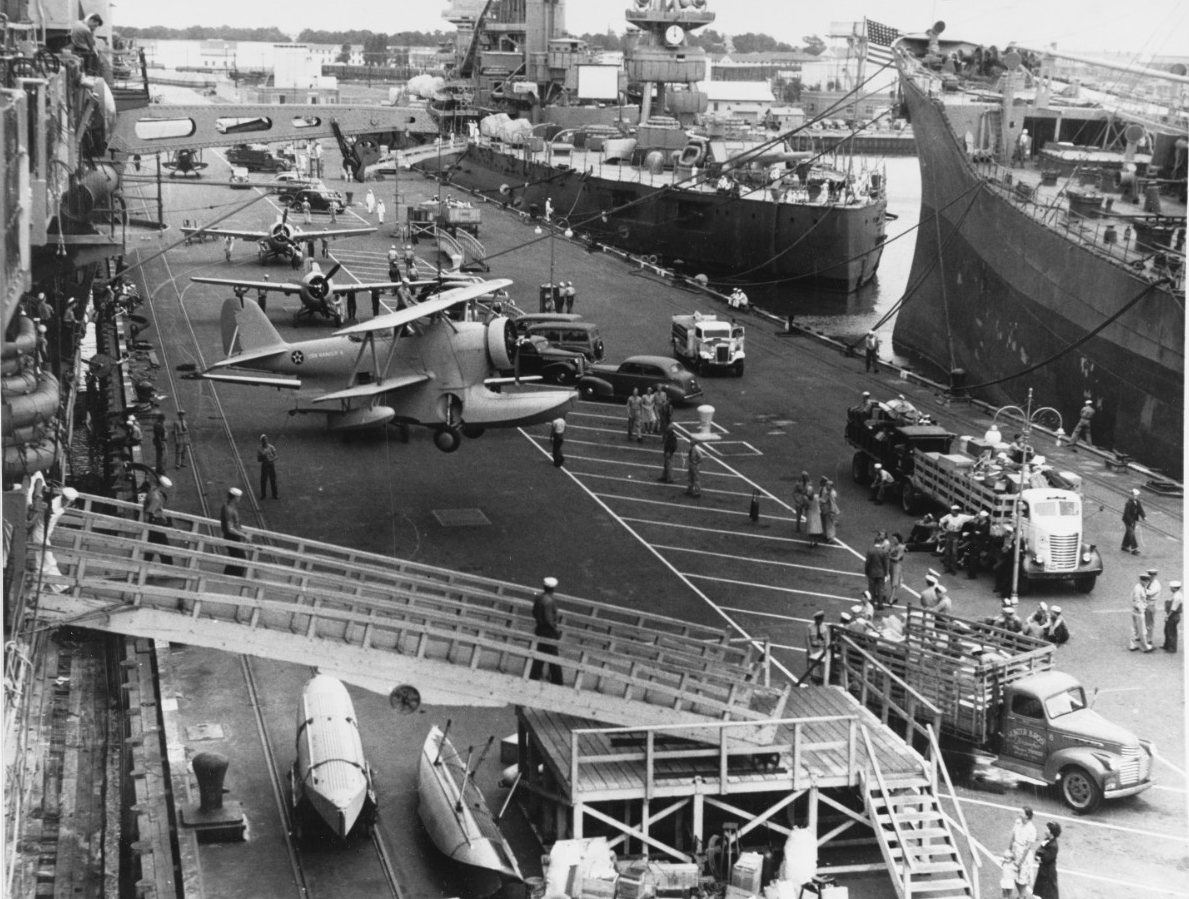 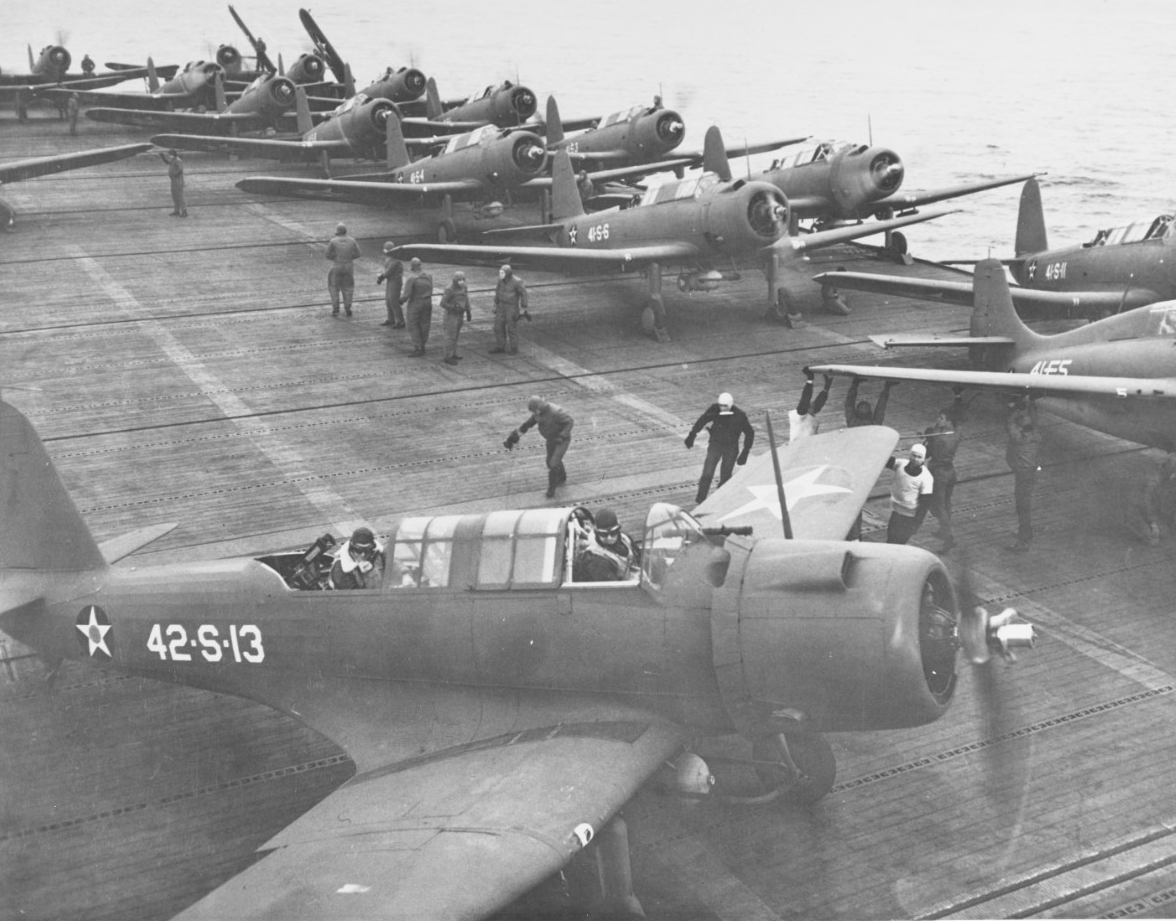 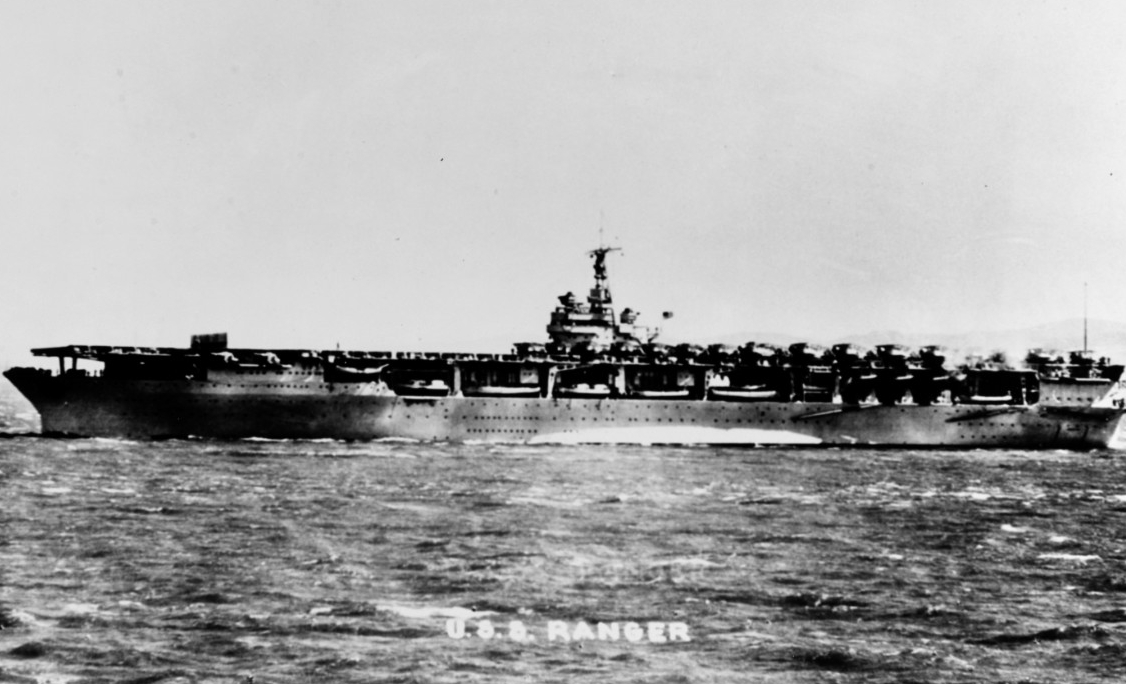 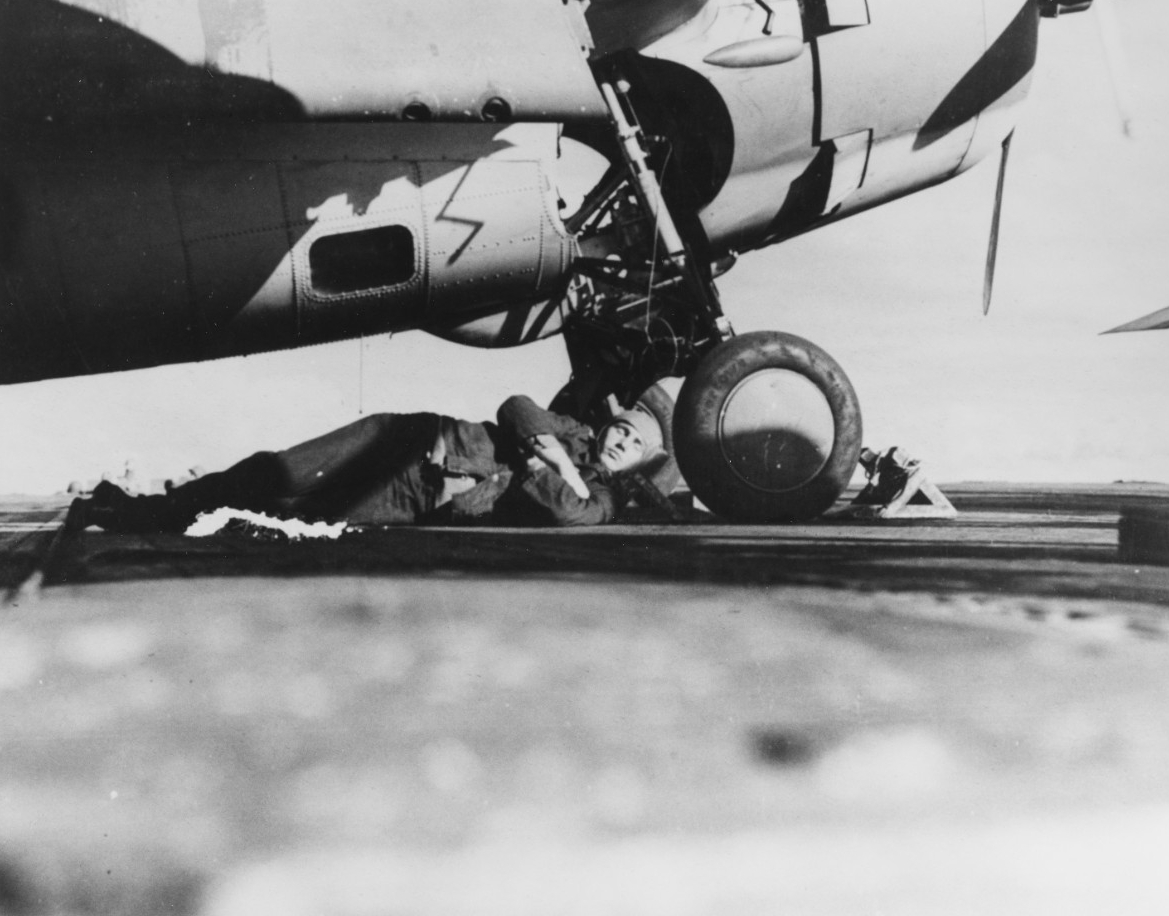 A USS Ranger (CV-4) plane captain caught a few winks with a chock for his pillow during “stand by to flight quarters,” beneath a Grumman Wildcat during Operation Torch, November 1942. Naval History and Heritage Command photograph, 80-G-30323. 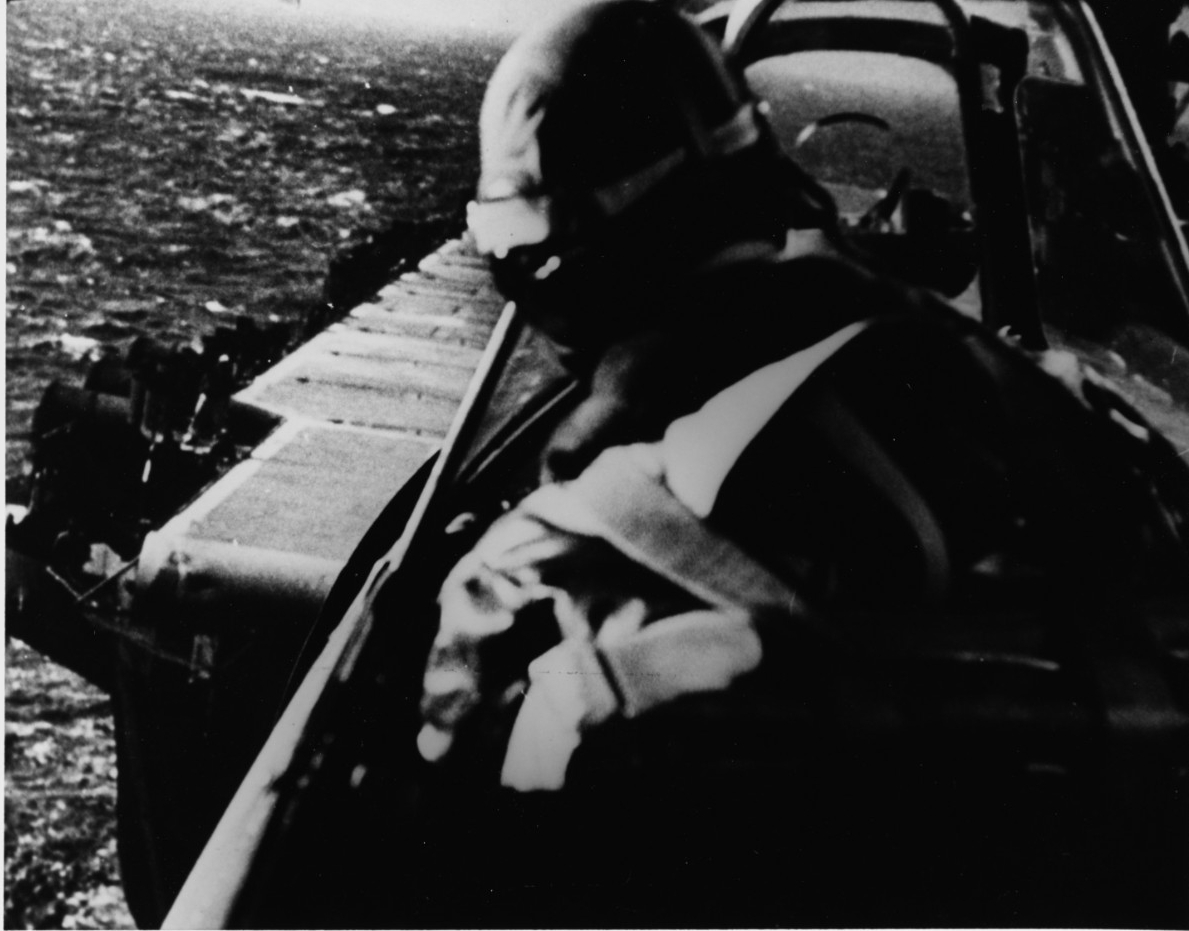 View taken from a Wildcat as the aircraft prepared to land aboard aircraft carrier USS Ranger (CV-4), circa 1942. The photograph was taken from a camera mounted behind the pilot. Naval History and Heritage Command photograph, NH 92492. 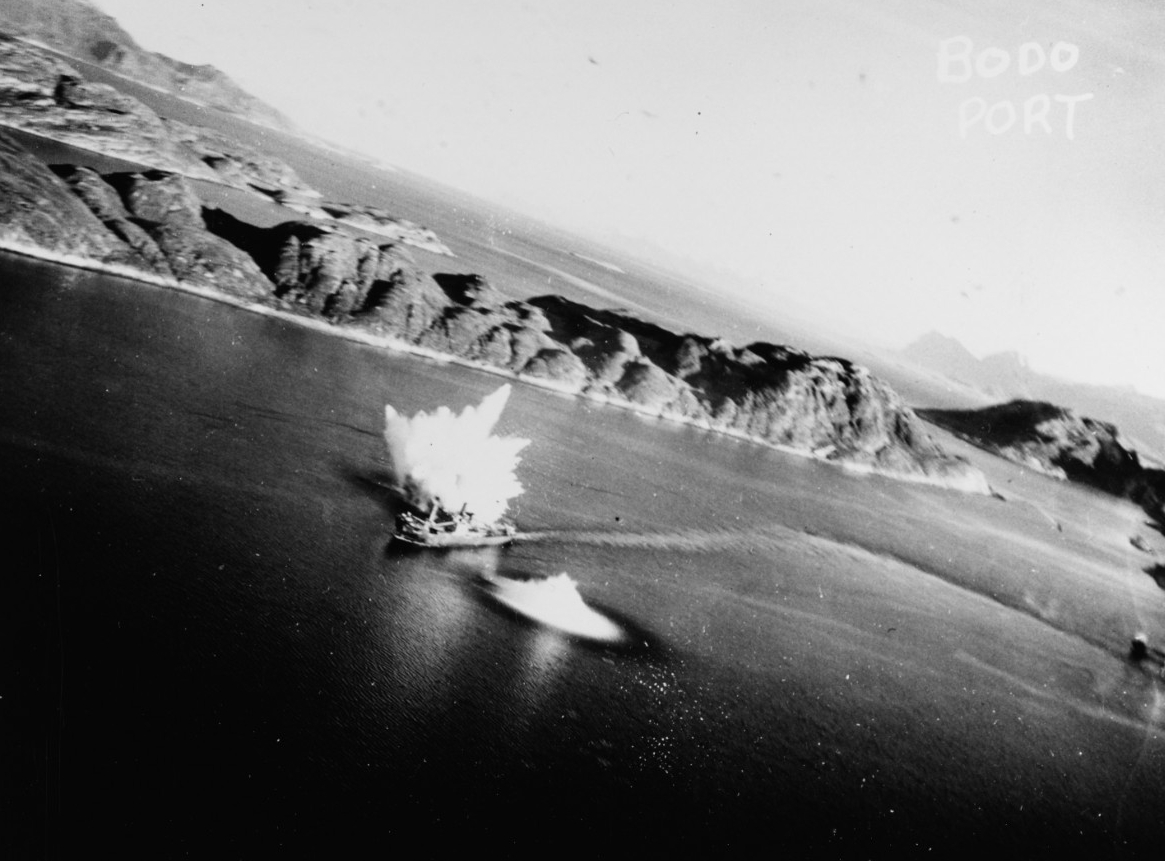 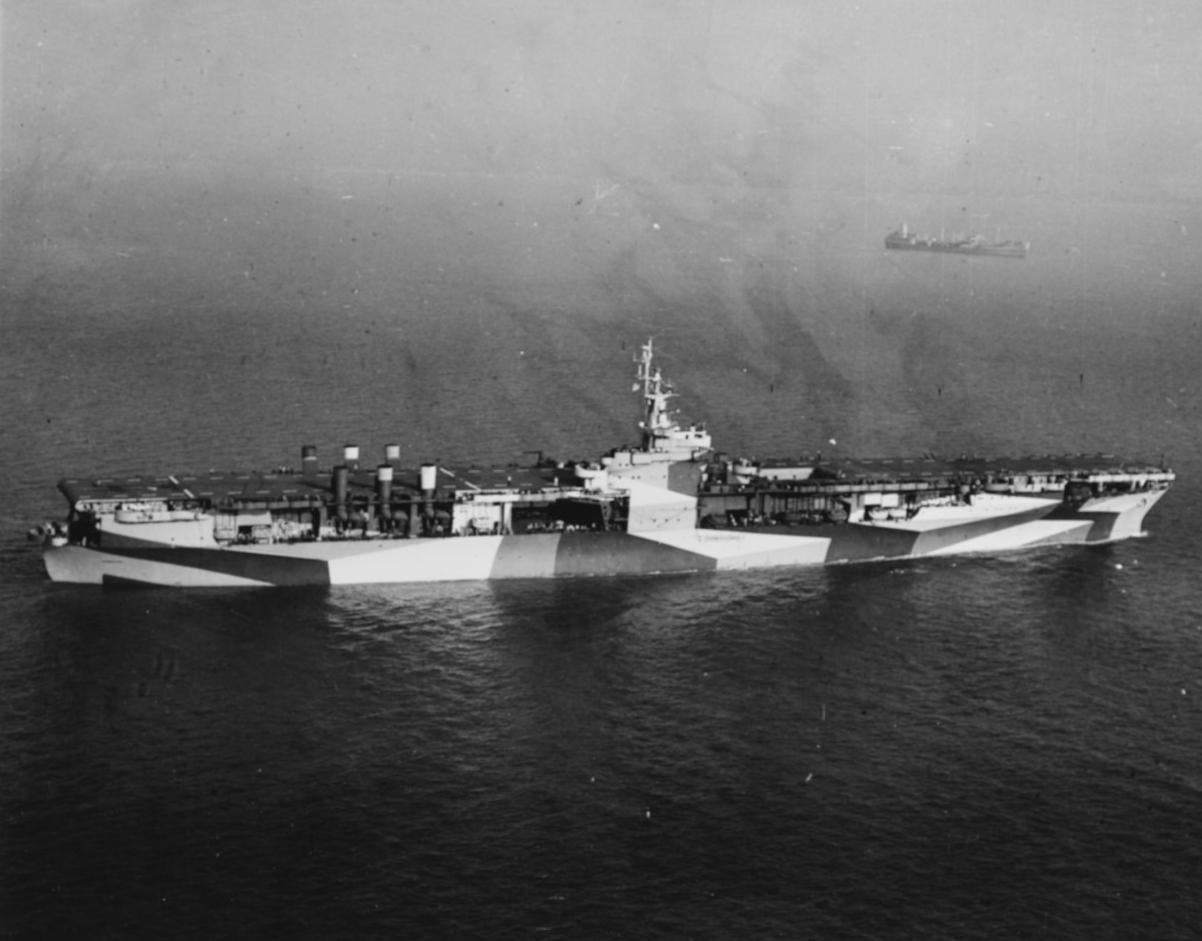