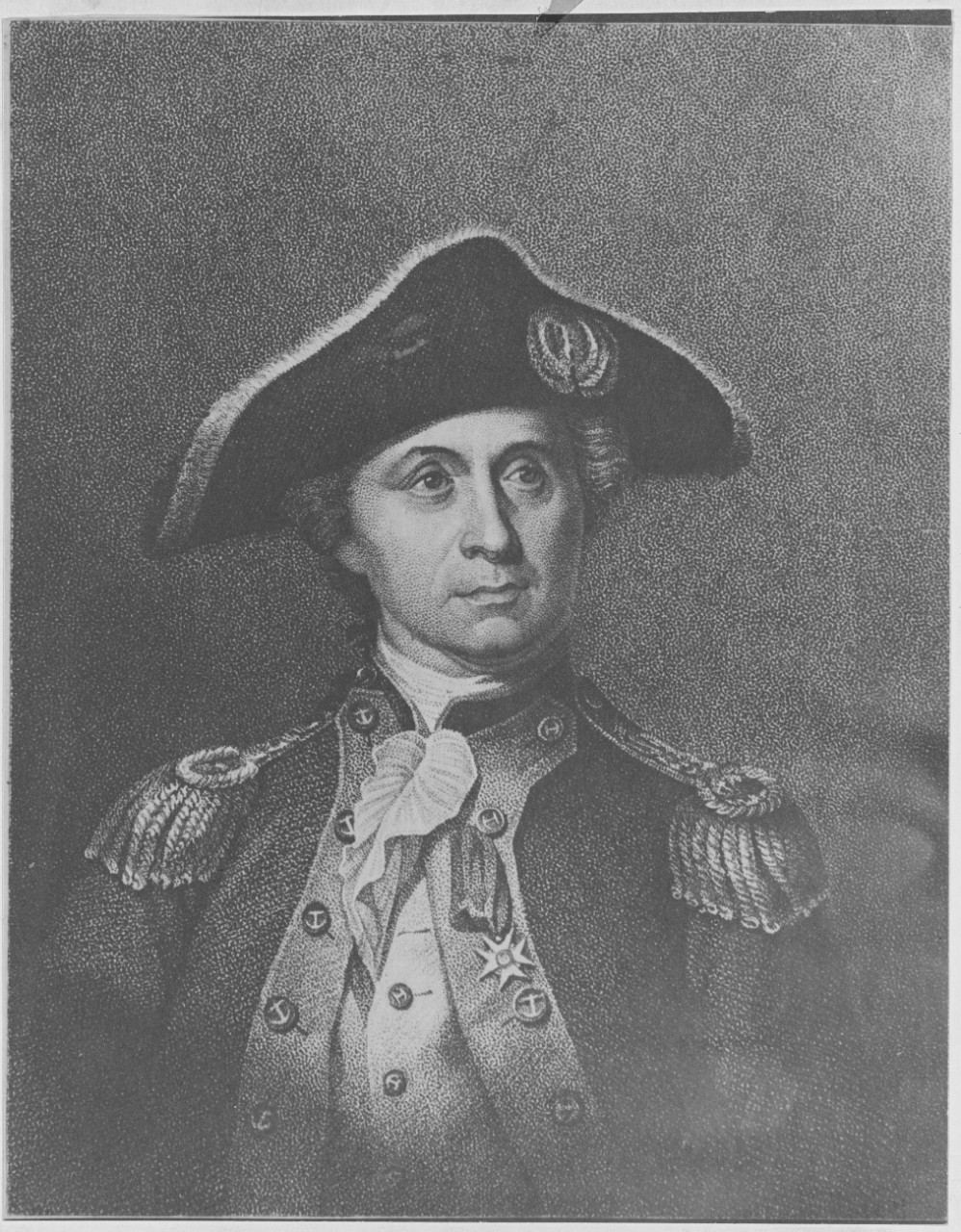 Jones was born John Paul on 6 July 1747, in Kirkcudbright, Scotland. At the age of 12 he entered the British merchant marine and went to sea for the first time as a cabin boy.

He became first mate on a slaver brigantine in 1766, but soon left that trade in disgust. He was appointed master in 1769. In 1773, he killed the leader of his mutinous crew in self-defense at Tobago, in the West Indies. To avoid trial, he fled to Virginia and was considered a fugitive by the British. He concealed his identity by adding the surname Jones.

At the outbreak of the American Revolution in 1775, Jones went to Philadelphia and entered the Continental Navy. He was commissioned a lieutenant on the first American flagship, Alfred. Jones was quickly promoted to captain in 1776, and was given command of the sloop Providence. While on his first cruise aboard Providence, he destroyed British fisheries in Nova Scotia and captured sixteen prize British ships.

In command of Ranger in 1777 and 1778, he operated in British home waters and made audacious raids on England’s shore. In recognition of his exploits, he was placed in command of five French and American vessels. Aboard his flagship, Bonhomme Richard, Jones led his small squadron in the capture of seven merchantmen off the Scottish coast. On 23 September 1779, Jones fought one of the bloodiest engagements in naval history with the 44-gun Royal Navy frigate Serapis. Although his own vessel was burning and sinking, Jones would not accept the British demand for surrender, replying, “I have not yet begun to fight.” More than three hours later, Serapis surrendered and Jones took command.

According to some historians, Jones remained appealing as much for his actions as for his personality. British chapbooks, an early form of dime novels, pictured him as a ruthless marauding pirate akin to Blackbeard. His attacks on British ships were often sudden and sometimes bloody. The vision of a swarthy scalawag persisted even to the writings of Rudyard Kipling a century later.

Thomas Jefferson and others referred to him as “little Jones” ─ he may have been 5’5”. Unlike other merchant seamen, he was well dressed, carried a sword, and conducted himself with practiced decorum. He had a Scottish brogue and light Celtic features. He was intense about his honor and his duties and was a harsh military master, but was also surprisingly sociable. He was a prolific poem and letter writer, spoke some French, and, though he never married, was involved in many romances. Above all, no one questioned his daring. In Britain, his naval actions against the mother country certainly led to his reputation as a pirate.

In 1788, Russian Empress Catherine the Great appointed Jones rear admiral in the Russian navy, in which he saw action in the Liman campaign in the Black Sea. He left the Russian service in 1789 and moved to Paris. He was appointed U.S. Consul to Algiers but died before the commission arrived. His body was buried in Paris, but in 1905, after a lengthy search, his remarkably preserved corpse was discovered and removed from a gravesite in Paris and transported to the United States. Through the intervention of President Theodore Roosevelt, Jones’ remains were reinterred in an ornate tomb at the Naval Academy Chapel at Annapolis, Maryland, in 1913. 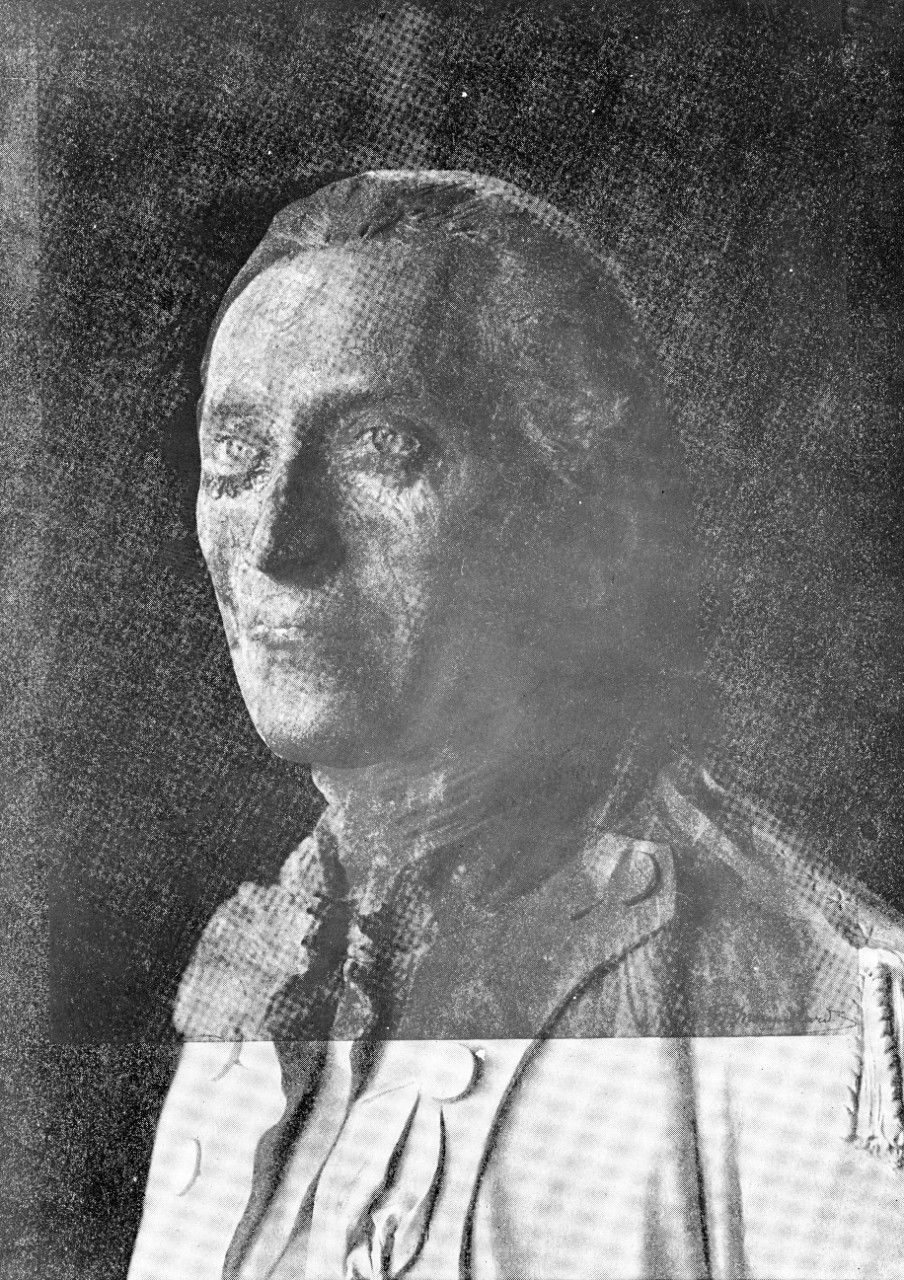 A composite picture showing the match between a plaster cast of Captain John Paul Jones and his remains. (NH 48749) 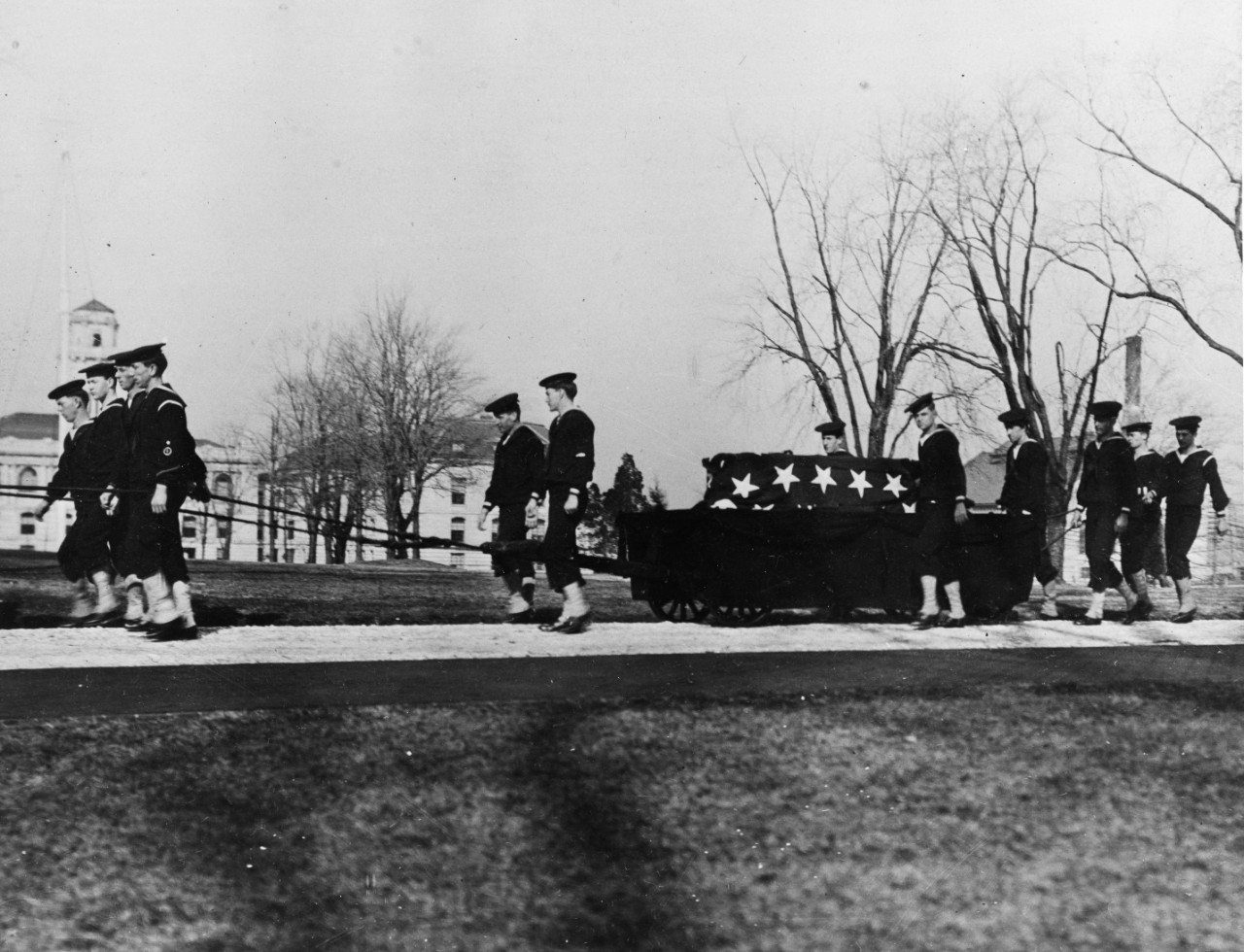 26 January 1913 photo by Mrs. C. R. Miller, showing the guard of honor transporting the remains of John Paul Jones to the crypt of the Chapel of the Naval Academy. (NH 48780) 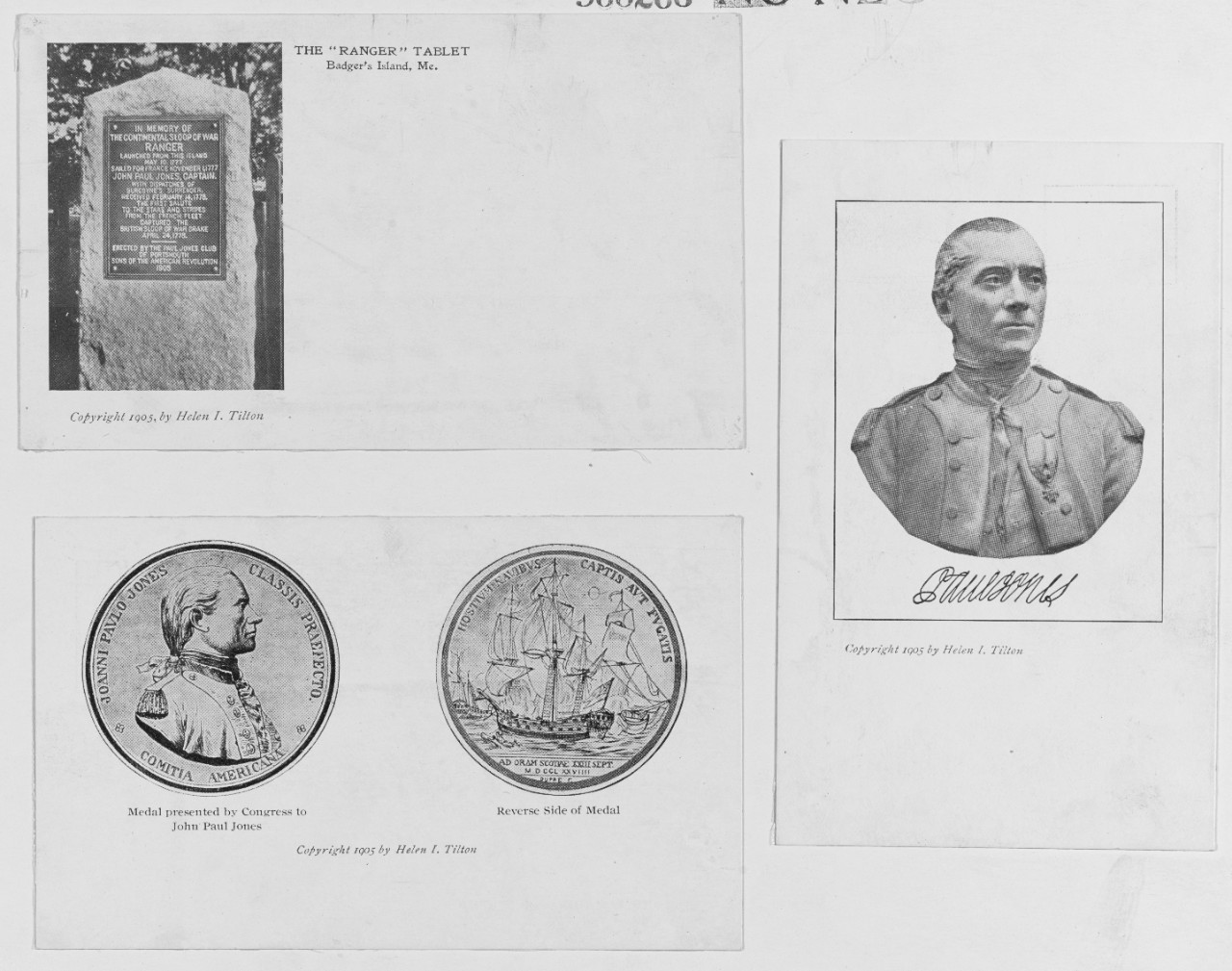 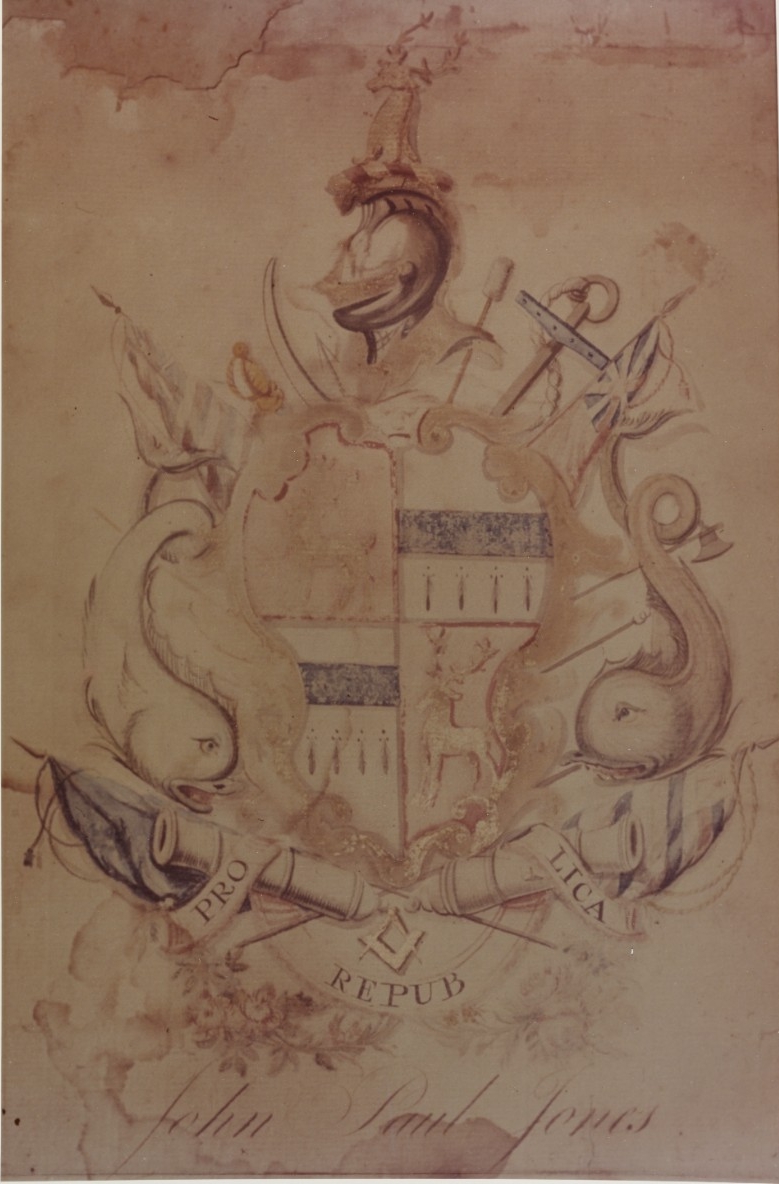 Painting of John Paul Jones' Achievement of Arms. This coat of arms was created when Jones was made a chevalier of St. Louis by the King of France. (KN-756) 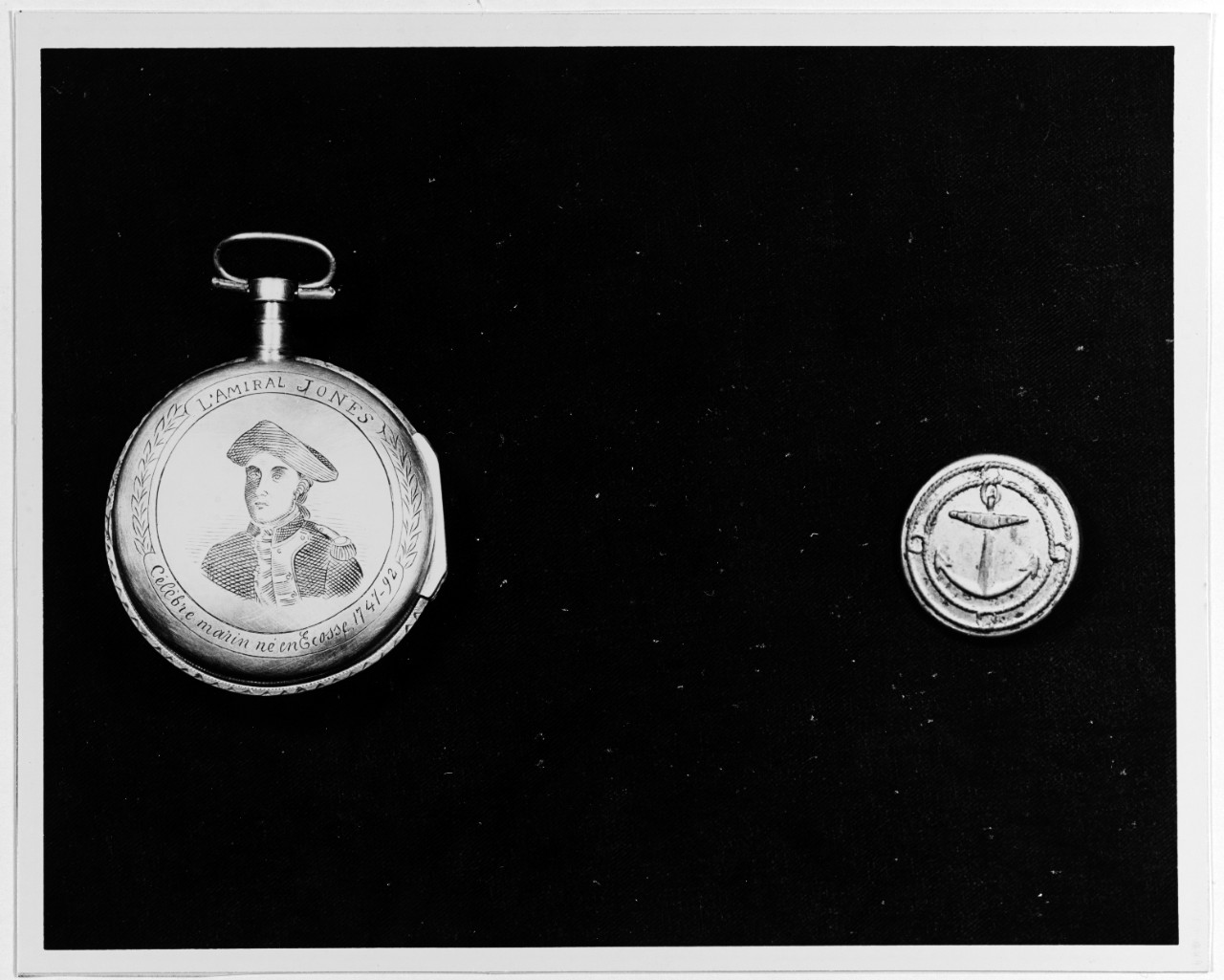 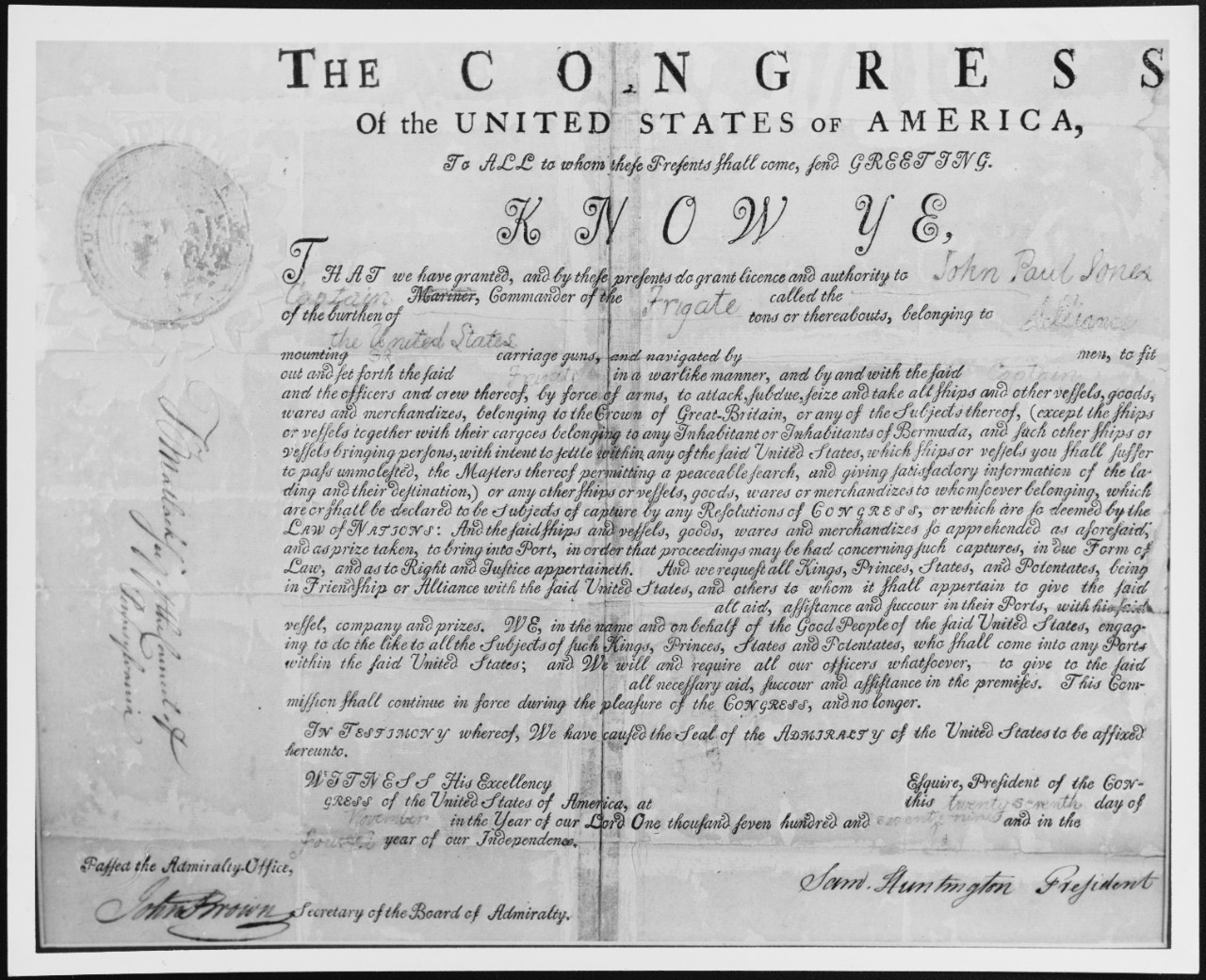 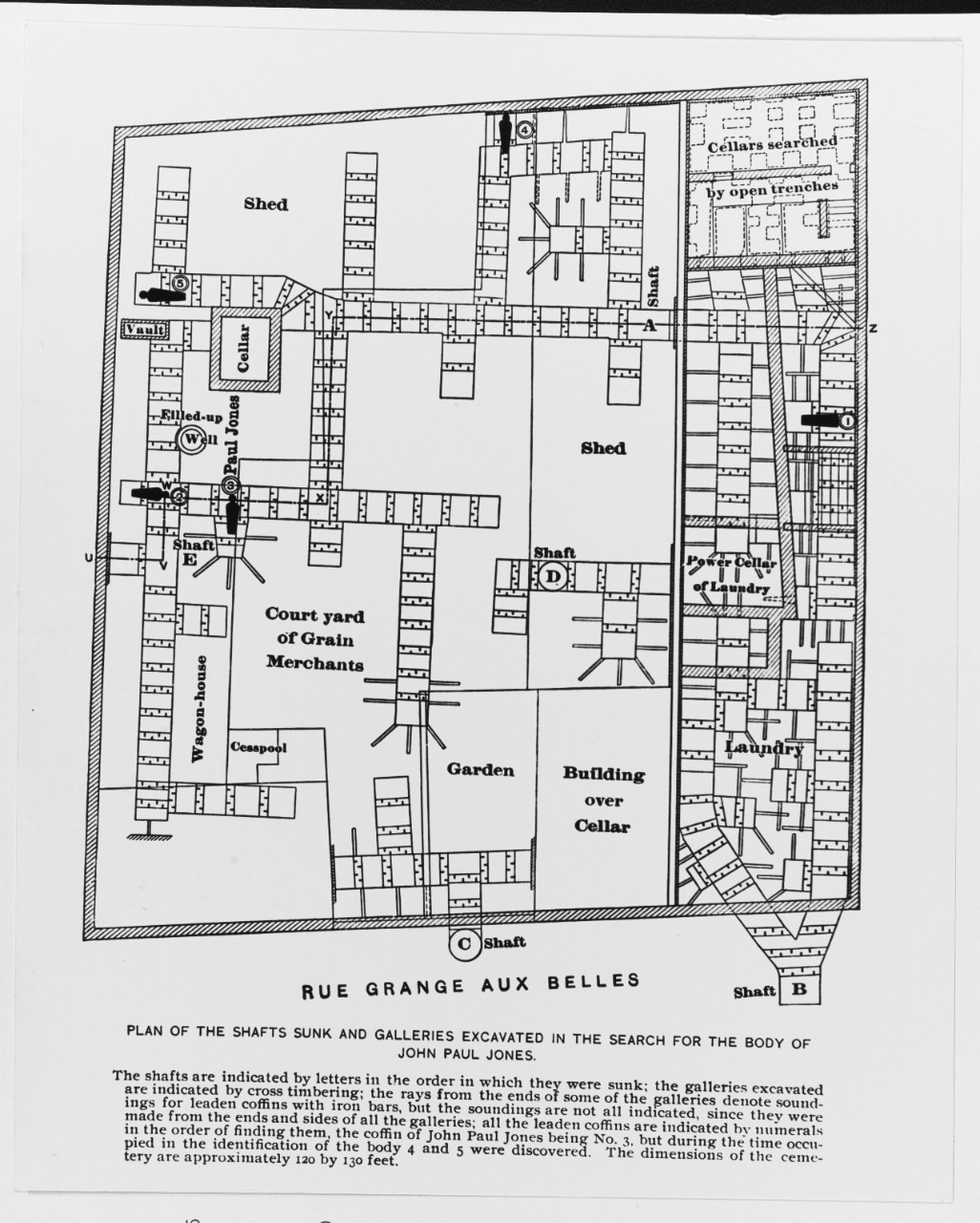 Plan of the shafts sunk and the galleries excavated in the search for the body of John Paul Jones. (NH 78752) 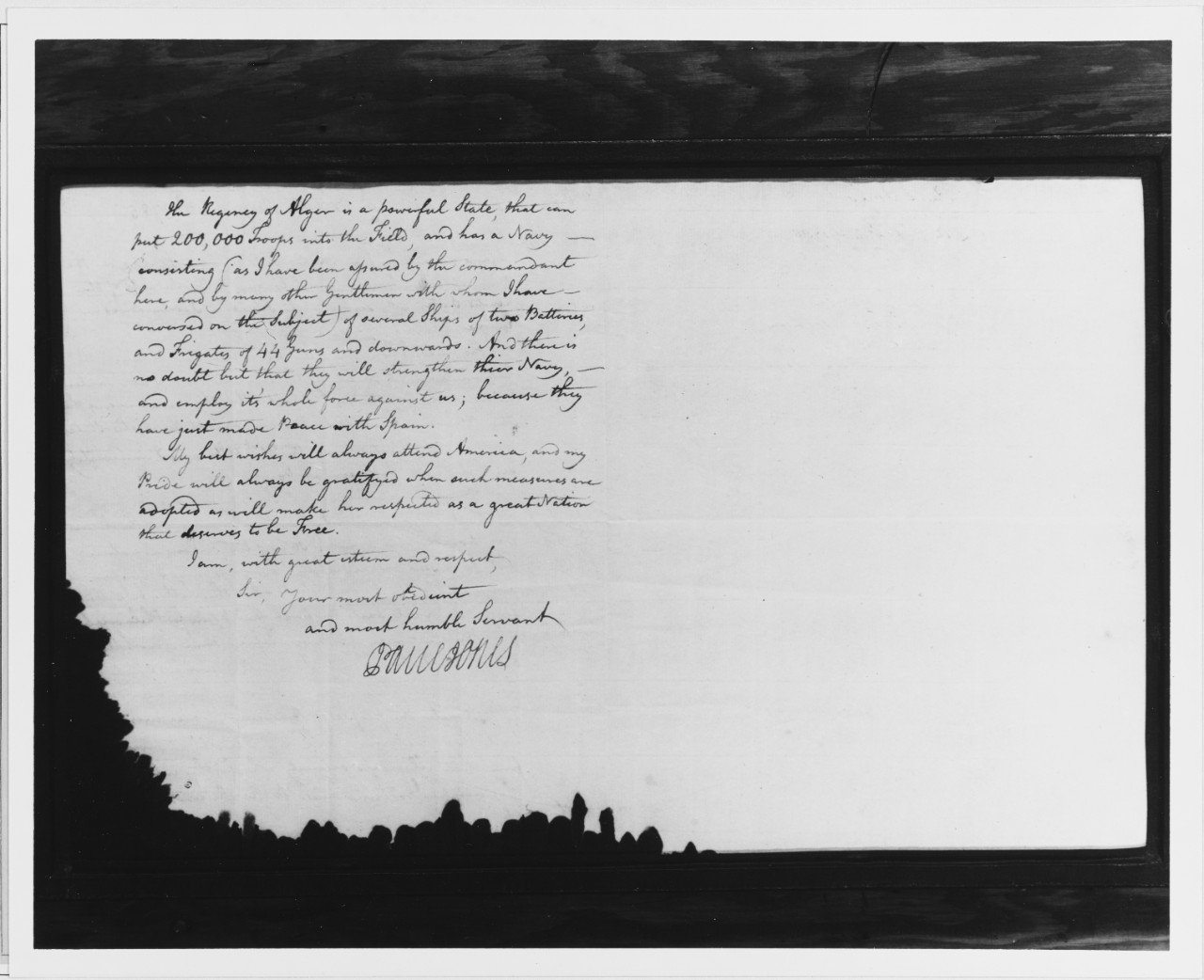 Letter from John Paul Jones to John Jay regarding the declaration of war by Algeria against the United States and his estimation of the Algerian army and navy strength, 6 August 1785. (NH 115430-A) 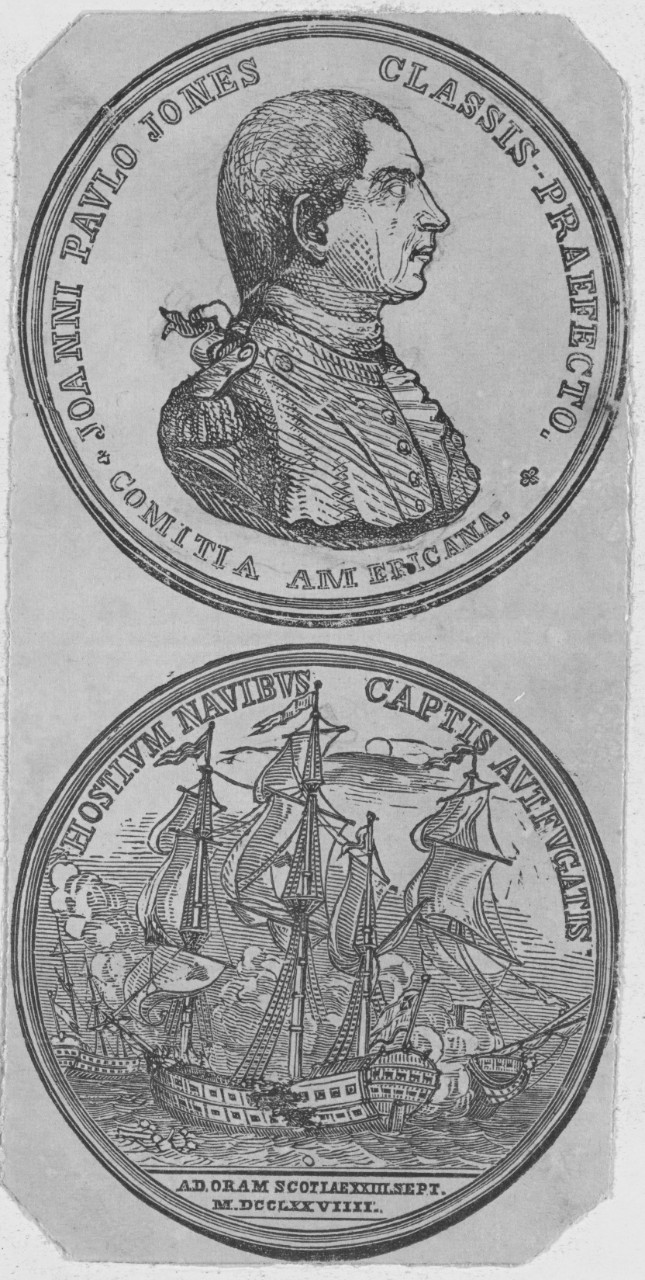 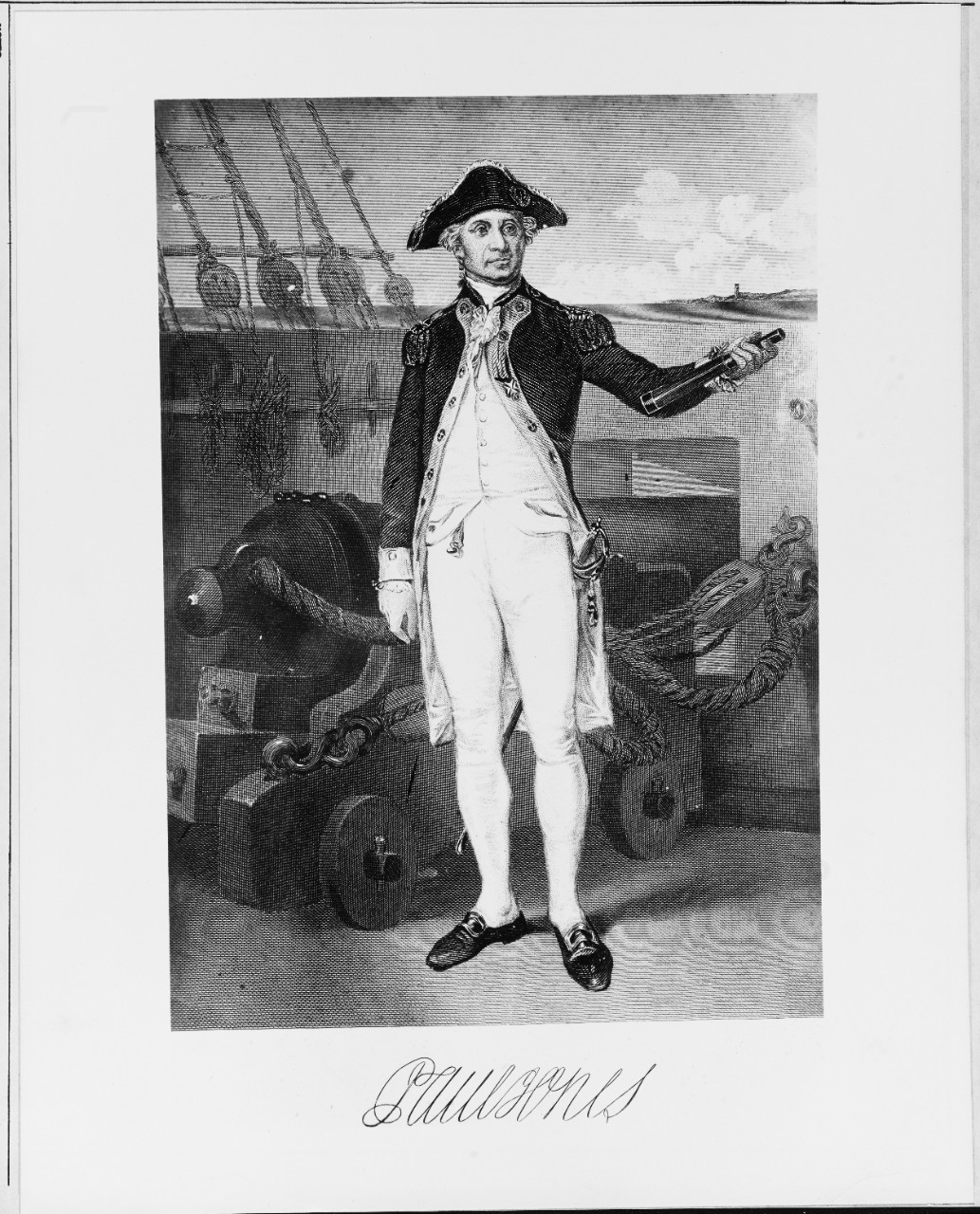 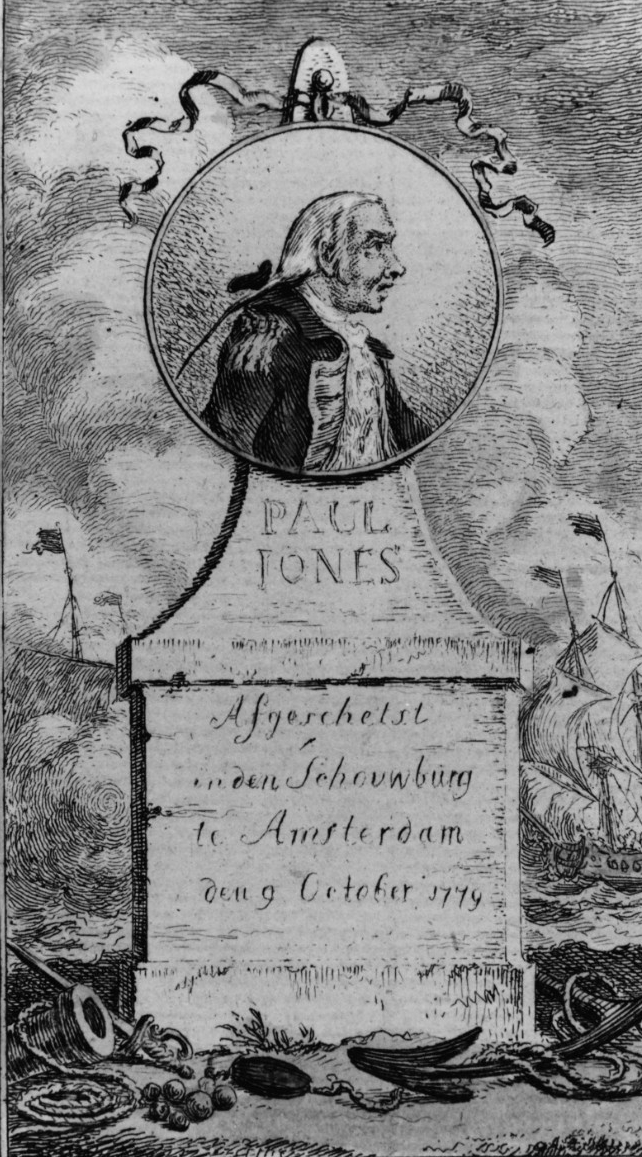 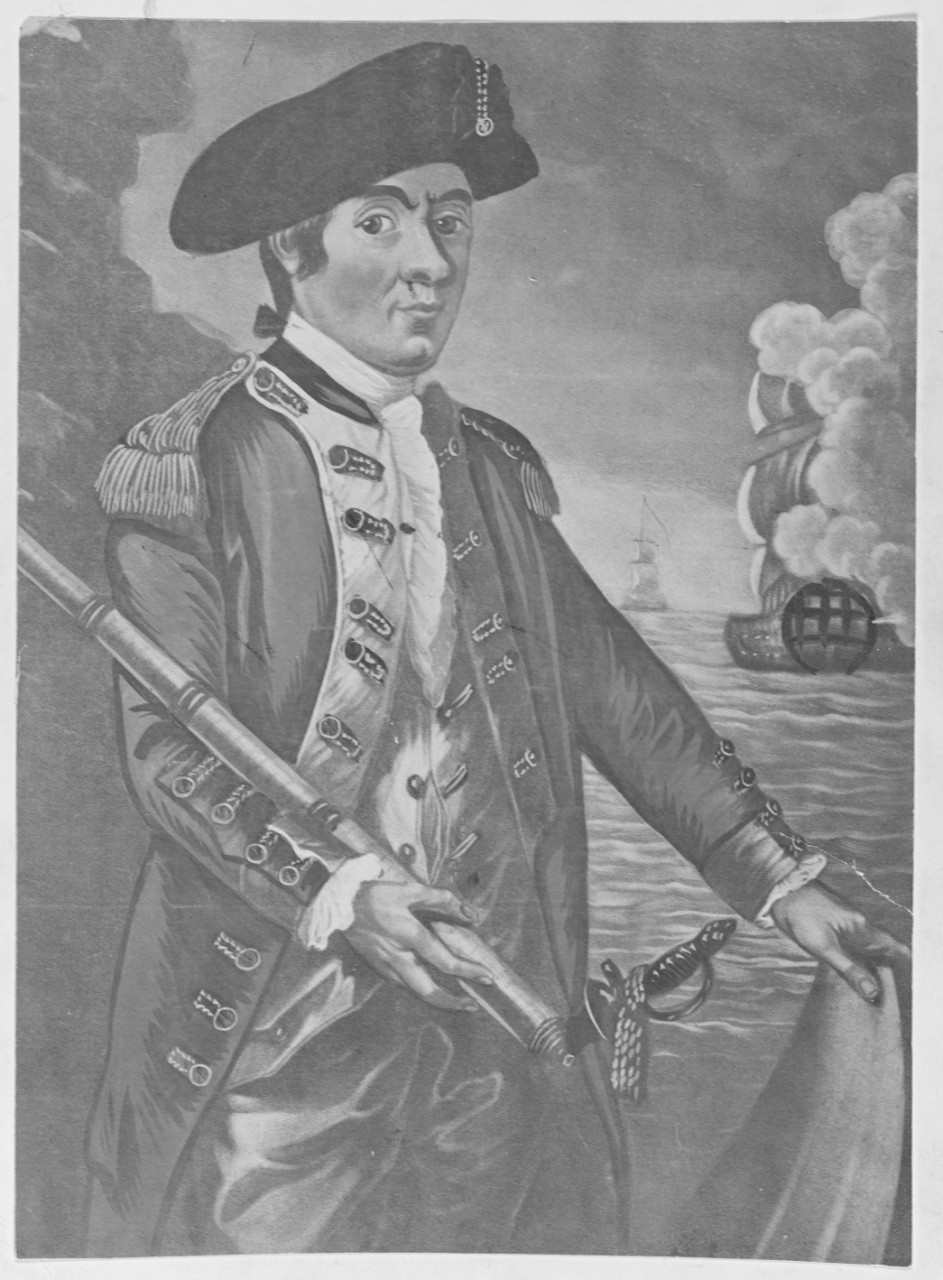